Two-stage hepatectomy (TSH) is a well-established surgical technique, used to treat bilateral colorectal liver metastases (CRLM) with a small future liver remnant (FLR). However, in classical TSH, drop-out is reported to be around 25%-40%, due to insufficient FLR increase or progression of disease. Trans-arterial radioembolization (TARE) has been described to control locally tumor growth of liver malignancies such as hepatocellular carcinoma, but it has been also reported to induce a certain degree of contralateral liver hypertrophy, even if at a lower rate compared to portal vein embolization or ligation.

Herein we report the case of a 75-year-old female patient, where TSH and TARE were combined to treat bilateral CRLM. According to computed tomography (CT)-scan, the patient had a hepatic lesion in segment VI-VII and two other confluent lesions in segment II-III. Therefore, one-stage posterior right sectionectomy plus left lateral sectionectomy (LLS) was planned. The liver volumetry estimated a FLR of 38% (segments I-IV-V-VIII). However, due to a more than initially planned, extended right resection, simultaneous LLS was not performed and the patient underwent selective TARE to segments II-III after the first surgery. The CT-scan performed after TARE showed a reduction of the treated lesion and a FLR increase of 55%. Carcinoembryonic antigen and CA 19.9 decreased significantly. Nearly three months later after the first surgery, LLS was performed and the patient was discharged without any postoperative complications.

According to this specific experience, TARE was used to induce liver hypertrophy and simultaneously control cancer progression in TSH settings for bilateral CRLM.

Core Tip: Two-stage hepatectomy and trans-arterial radioembolization (TARE) are usually used in advanced stage primary liver malignancies. In this case report, two-stage hepatectomy and TARE were combined, for the first time, to treat a patient with bilateral colorectal liver metastases and a small future liver remnant. In particular, TARE was performed to induce liver hypertrophy and at the same time to control tumor growth between stages, thus reducing the risk of tumor progression.

Two-stage hepatectomy (TSH) has been traditionally advocated for bilateral colorectal liver metastases (CLRM) that could not be resected in a single operation[1]. In TSH, when the future liver remnant (FLR) is considered not enough, contralateral portal vein ligation (PVL) or embolization (PVE) can be performed in the first stage to increase FLR volume. However, 25%-40% of patients will not undergo the second stage due to insufficient liver hypertrophy and/or progression of disease[2]. Trans-arterial radioembolization (TARE) consists of the selective intra-arterial administration of microspheres loaded with a radioactive compound—usually yttrium90—and has been shown to control tumor growth and to induce liver hypertrophy especially in patients with primary liver cancer. More recently, it has been shown to be effective also in CLRM setting[3]. However, the combination of these two techniques has never been explored before.

A 75-year-old female patient presented herself with mild abdominal pain. 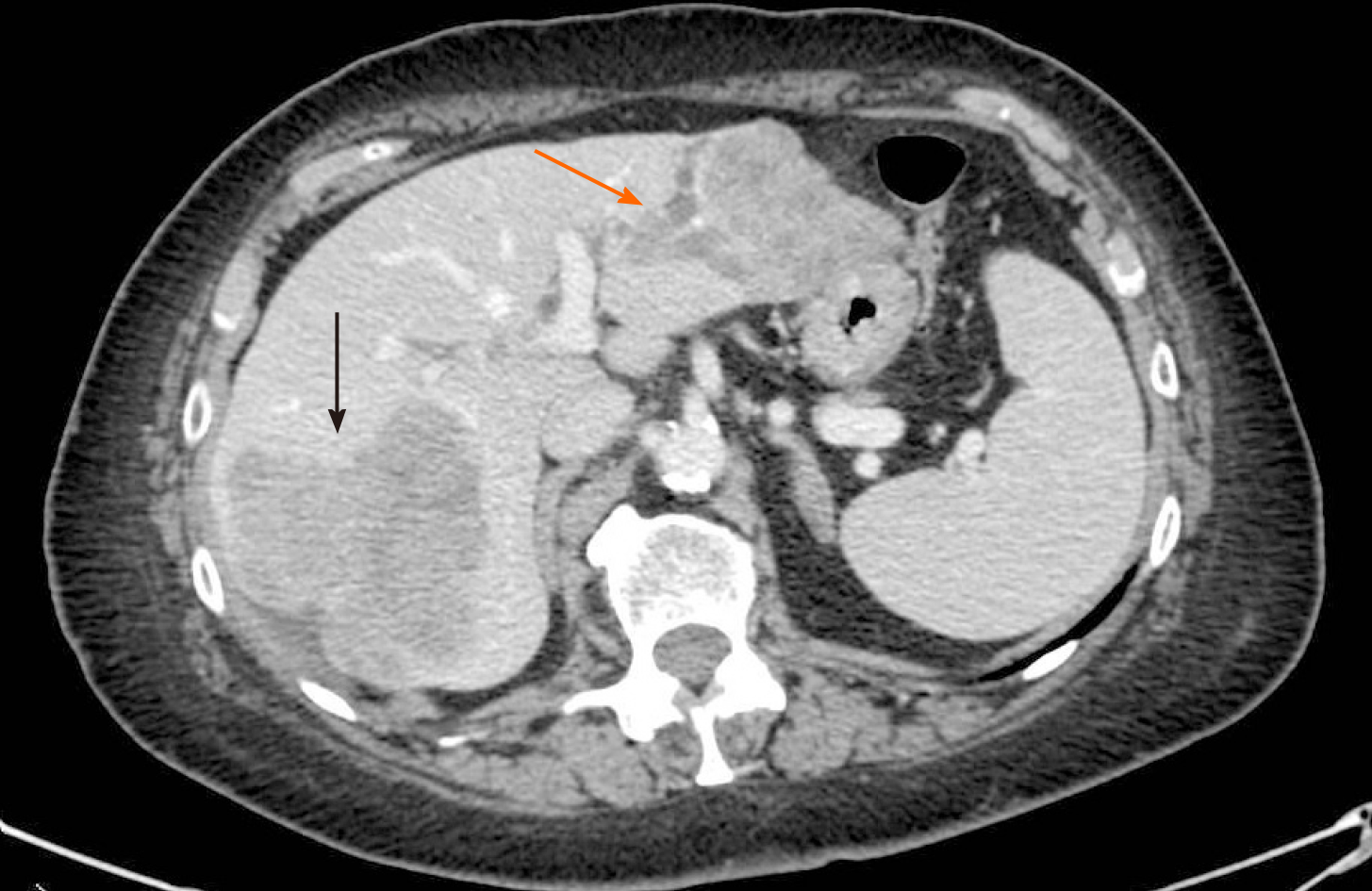 Figure 1 Pre-operative computed tomography-scan. The lesion occupying the right posterior segments of the liver (black arrow) and two other confluent lesions in the left lobe with intrabiliary growth pattern (orange arrow).
History of past illness

The patient had undergone endoscopic removal of a sigmoid polyp cancer (T1NxMxR0) 3 years before.

She suffered from hypertension and hypoparathyroidism. She had no family history of cancer.

The patient had a good performance status. Physical examination was unremarkable with vital signs within the normal range of values. No jaundice was observed.

Esophagogastroduodenoscopy and colonoscopy were negative. According to liver volumetry, total functional liver volume (TFLV) measured 1635 mL and FLR (segments I-IV-V-VIII) 621 mL, with a resulting FLR/TFLV of 38%.

The final diagnosis of the presented case was suspected bilateral hepatic metastases from colorectal cancer.

The operation started with a minimally invasive approach, but it was converted to open surgery due to diaphragm infiltration by the lesion located in the right liver. Intraoperative ultrasound showed that part of segment VIII was also involved. After detachment of the lesion from the diaphragm and its suture, a portal branch of segment V was ligated during parenchymal transection. Given the wider than initially planned hepatic surgery (segments V-VI-VII + part of segment VIII) and the difficulties encountered during the first resection, left lateral sectionectomy (LLS) was postponed. As a bridge treatment, TARE was chosen in order to control locally the disease while waiting for FLR increase. According to the CT-scan performed 10 d after surgery, FLR measured 632 mL. A small intrabdominal fluid collection was incidentally detected close to the surgical site as well as an ischemic area in segment V. The patient was discharged home on postoperative day 14, without major complications. The final diagnosis, based on histopathology of surgery specimen, was adenocarcinoma from colorectal cancer (KRAS and BRAF wild-type). TARE was carried out 11 d after discharge and realized with a single treatment (200 Gy) of Selective Internal Radiation (SIR) spheres (Sirtex Medical, Sydney, Australia) without any post-procedural complications (Figure 2). Forty-seven days after TARE, the patient underwent a new CT-scan showing a 32% reduction of the confluent lesion in segment II-III, with a surprisingly final FLR volume of 980 mL (FLR increase = 55%, FLR/TFLV = 77%) (Figure 3). CEA and CA 19.9 decreased to 93.7 ng/mL and 92.5 U/mL, respectively. After resolution of the abdominal collection by percutaneous drainage, we planned the second stage of surgery and 3 mo later after the first operation, the patient underwent LLS. 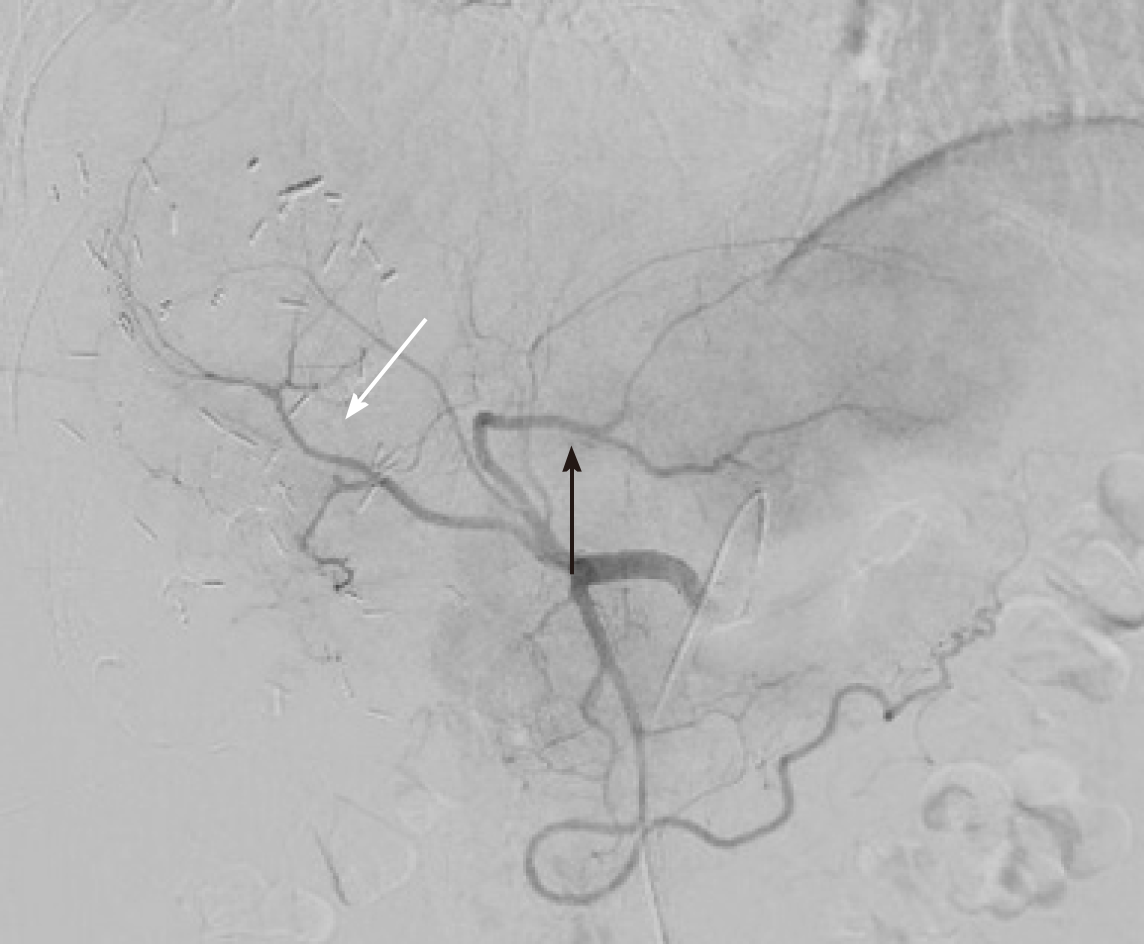 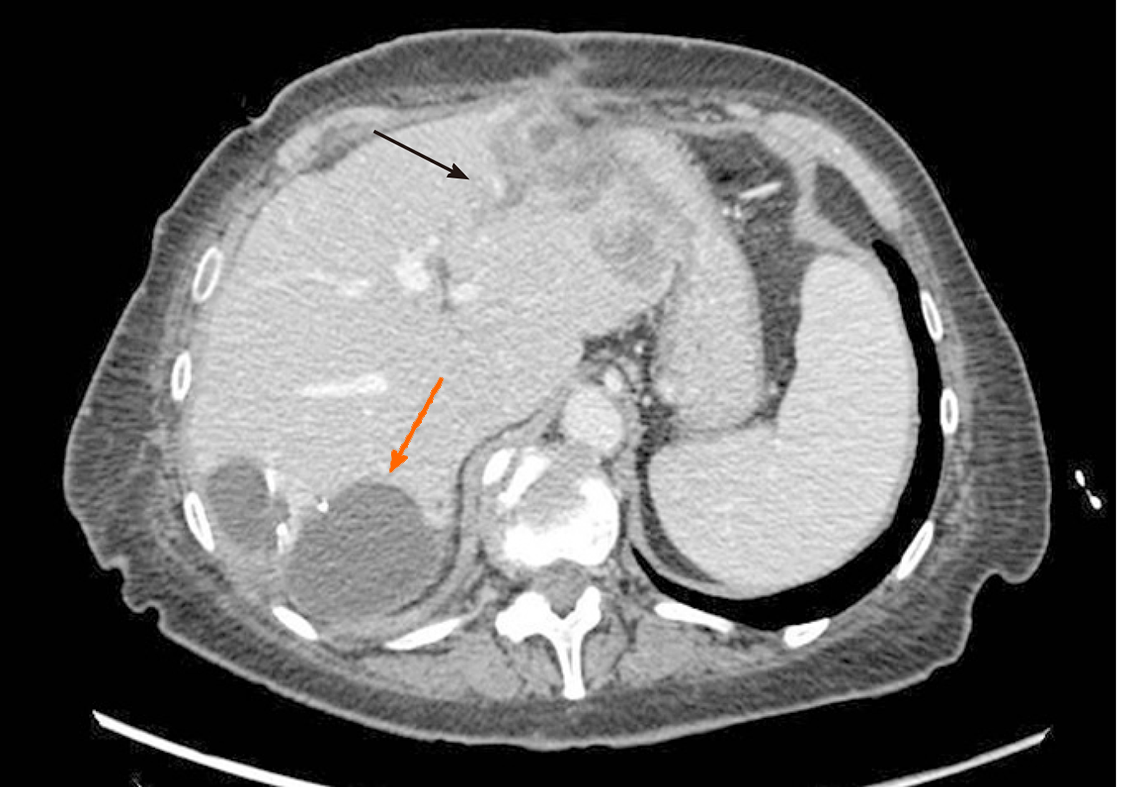 Figure 3 Computed tomography-scan performed one month after trans-arterial radioembolization. The reduction of the lesion of the left lobe and the intrabiliary growth pattern (black arrow). An intrabdominal fluid collection was found close to the surgical site (orange arrow).
OUTCOME AND FOLLOW-UP

The postoperative course was uneventful. The patient did not receive any adjuvant chemotherapy and almost two years after the first surgery is still alive and free of disease.

According to this specific experience, TARE was used for the first time, combined with classical TSH, to control cancer progression between stages, waiting for adequate liver hypertrophy before the second resection.

TARE has been already shown to produce effective liver parenchyma hypertrophy in patients with primary hepatic malignancies treated with lobar 90Y radioembolization therapy[4]. After TARE, however, compared to PVE/PVL, the hypertrophy is radiation-induced rather than caused by embolization and is reached at a slower rate. According to a recent systematic review[5], the median kinetic growth rate of the controlateral lobe for patients underwent lobar TARE for CRLM was 0.8% per week compared to 6.1% of PVE. Despite a slower increase, however, a hypertrophy of 26%-47% was obtained at time intervals ranging from 44 d to 9 mo[4], of similar magnitude to that observed after PVE. In addition, Birgin et al[5] found that up to 84% of patients affected by primary and secondary hepatic malignancies had a local tumor control following TARE and about 30% of unresectable tumors underwent hepatic resection.

Review of the literature, including only studies of patients submitted to hepatectomy for CRLM after preoperative TARE (n = 18)[6-18] (Tables 1 and 2), showed that even though many of them comprised bilateral distribution of CRLM[18-20], only Pardo et al[21] reported a “two-stage resection” in 10 patients, 7 of whom underwent associating liver partition and portal vein ligation for staged hepatectomy (ALPPS), probably from the cohort of Justinger et al[22] In this latter study, resectability of ALPPS + TARE was 85.7%. Increase of FLR in CRLM patients was reported only in few studies[22,23]. In our report, TARE to segment II-III led to a FLR increase of 55%, probably induced by the combined regenerative effect produced by the first liver resection, similar to what happens in ALPPS procedure, and by TARE itself. If a larger FLR hypertrophy was required, the role of TARE in combination also with classical portal vein occlusion techniques such as PVE/PVL or ALPPS, could have been explored. However, in this case, TARE was preferred over PVE or PVL since segment IV had to be preserved being part of the FLR. Furthermore metastasis in segment II-III could have progressed leading to the drop out of the patient. On the other side, the risk of proceeding with a second simultaneous hepatectomy or ALPPS was deemed too high. Last but not least, from the oncological point of view, this strategy may allow surgeons, without dealing with time issue, to select only patients with favorable tumor biology, according to radiological response after TARE[12].

TARE in TSH setting may represent a viable option to increase resectability in patients with bilateral CLRM by stimulating liver hypertrophy and controlling locally the disease. Future larger, comparative studies may help answer the questions above.