A 29-year-old male with a past medical history of sickle cell disease presented with vaso-occlusive pain crisis. On examination, he had jaundice and a soft, non-tender abdomen. Initially he was alert and fully oriented; within 24 h he developed new-onset confusion. Laboratory evaluation was notable for hyperbilirubinemia, leukocytosis, anemia, thrombocytopenia, acute kidney injury and elevated international normalized ratio (INR). Imaging by ultrasound and computed tomography scan suggested a cirrhotic liver morphology with no evidence of biliary ductal dilatation. The patient was diagnosed with acute sickle cell intrahepatic cholestasis after excluding competing etiologies of acute liver injury. He underwent LT from an HCV nucleic acid amplification test positive donor 9 d after initial presentation. The liver explant was notable for widespread sinusoidal dilatation with innumerable clusters of sickled red blood cells and cholestasis. On postoperative day 3, HCV RNA was detectable in the patient's peripheral blood and anti-HCV therapy with glecaprevir/pibrentasvir was initiated on postoperative day 23. He subsequently achieved sustained virologic response after completing 3 mo of therapy and has been followed clinically for 12 mo post-transplant.

This case highlights the utility of LT as a viable treatment option for acute sickle cell intrahepatic cholestasis.

Sickle cell disease (SCD) is the most common inherited blood disorder affecting up to 100000 Americans. It is an autosomal recessive disorder caused by a point mutation in the beta chain of chromosome 11 with a substitution of glutamic acid to valine. This substitution with a hydrophobic amino acid allows hemoglobin S (HbS) to polymerize on deoxygenation, forming rod-like polymers and resulting in poorly deformable sickled cells. Decreased red blood cell (RBC) pliability precipitates hemolysis and increases RBC membrane adhesiveness with the endothelium, which predisposes to vaso-occlusion of small blood vessels, which is often followed by reperfusion injury[1].

Involvement of the hepatobiliary system is observed in 10%-40% of sickle cell crises[1]. Hepatobiliary involvement may be related to conditions that are not unique to SCD but are more commonly seen in this group of patients compared to the general population as a result of chronic hemolysis and the resultant need for frequent blood transfusions. These conditions include cholelithiasis, cholecystitis, choledocholithiasis, acute cholangitis, pancreatitis, viral hepatitis and hemosiderosis. Hepatobiliary manifestations unique to patients with SCD include acute sickle cell hepatic crisis, acute hepatic sequestration and acute sickle cell intrahepatic cholestasis (the result of RBC sickling inside the hepatic sinusoids) (Table 1).

A 29-year-old African American male with a past medical history of SCD (Hb SS), maintained with exchange transfusions every 4-6 wk, with resultant hemosiderosis and cirrhosis presented with vaso-occlusive pain crisis in his lower extremities and uncontrolled epistaxis. His outpatient medications included deferasirox, folic acid and oxycodone. He denied tobacco, alcohol or drug use.

On initial examination, his vital signs were within normal limits. He was markedly jaundiced and was alert and fully oriented. His abdomen was soft without tenderness or organomegaly and with normal bowel sounds. Within 24 h of presentation, he developed new-onset confusion attributed to hepatic encephalopathy.

An extensive workup for acute liver injury was undertaken. Acute and chronic viral hepatitis testing was negative. Serologic testing for autoimmune hepatitis and genetic causes of liver disease, including hereditary hemochromatosis, alpha-1 antitrypsin deficiency and Wilson disease was negative. His ferritin was elevated at 1399 ng/mL. His arterial ammonia level was 72 µmol/L. He was diagnosed with an acute kidney injury with a serum creatinine of 3.48 mg/dL (baseline creatinine 0.6-0.7 mg/dL).

He was admitted to the medical intensive liver unit for further management. He required intubation and mechanical ventilation for acute hypoxic respiratory failure secondary to acute chest syndrome; for this he was treated with empirical vancomycin and meropenem. An exchange transfusion was initiated with subsequent decrease of HbS level from 56.3 to 8.2 g/dL. Despite the exchange transfusion, his hepatic synthetic function did not improve; he was rapidly evaluated and subsequently listed with a model for end-stage liver disease-sodium score of 40 for urgent liver transplantation (LT) for acute sickle cell intrahepatic cholestasis. 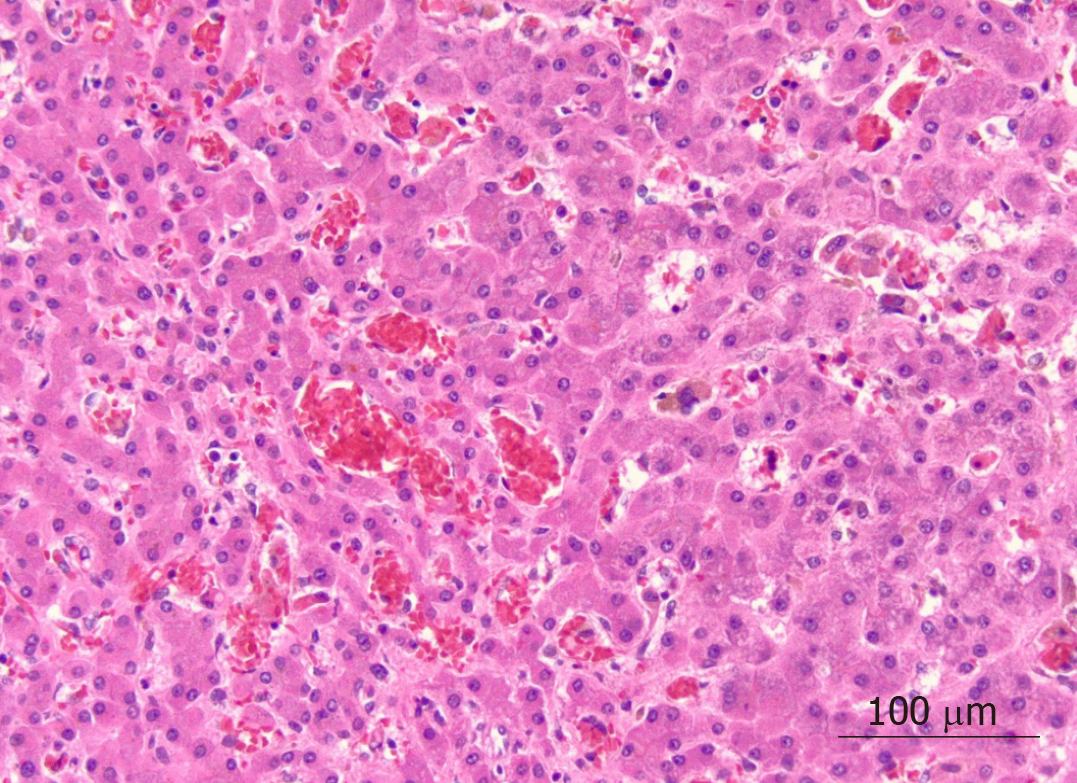 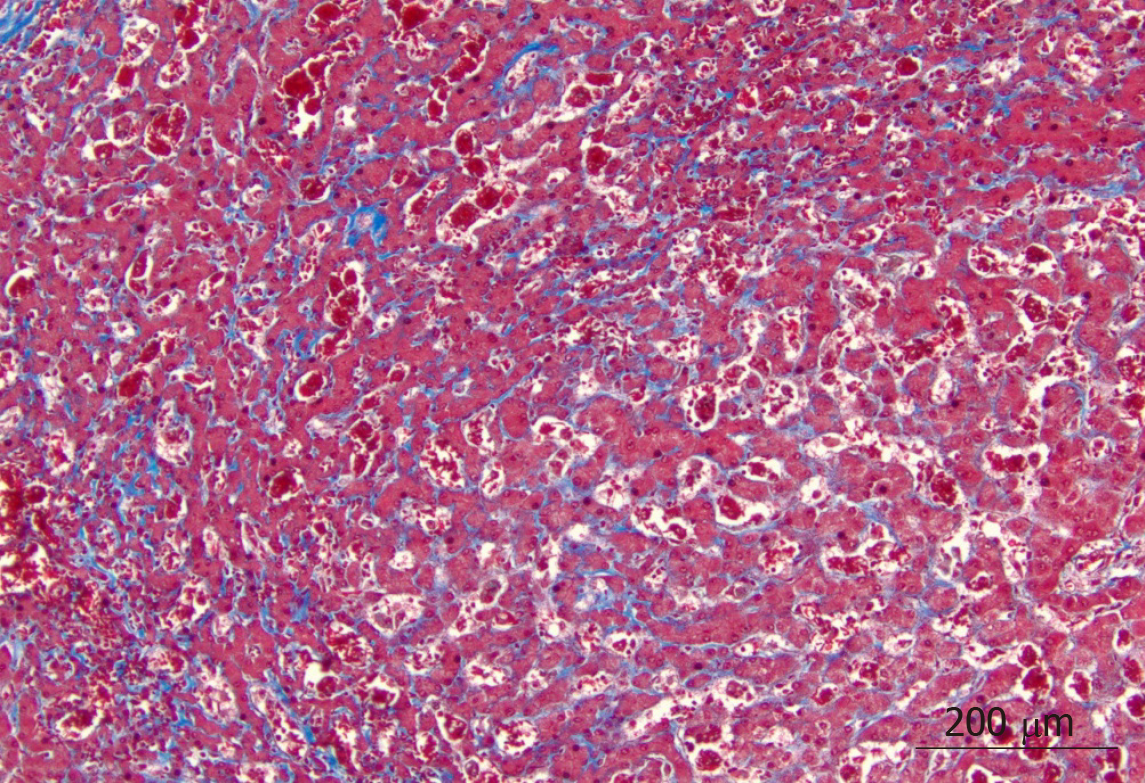 Immediately following LT, exchange transfusion was resumed and the patient was started on immunosuppression induction therapy with antithymocyte globulin. He was also initiated on mycophenolate mofetil, tacrolimus and a steroid taper for maintenance of immunosuppression. On postoperative day 3, HCV ribonucleic acid was found to be > 100000000 IU/mL. Genotyping revealed HCV genotype 1A; anti-HCV therapy with glecaprevir/pibrentasvir was started on post-operative day 23 after insurance approval. The patient progressed routinely and was discharged. He achieved sustained virologic response after completing 3 mo of anti-HCV therapy. At 12 mo post-operatively, his liver synthetic function is preserved on chronic tacrolimus immune suppressive therapy; he undergoes monthly exchange transfusions with a target HbS < 20%.

Only 22 cases of LT for SCH have been reported in the literature. The majority of transplants have been performed for acute liver failure (ALF) secondary to acute sickle cell intrahepatic cholestasis. We report the 23rd LT for SCH; the first reported case of an HCV NAT positive donor that facilitated urgent LT for an HCV NAT negative patient with acute sickle cell intrahepatic cholestasis. Our patient subsequently achieved sustained virologic response after being treated with 3 mo of glecaprevir/pibrentasvir.

Sickle cell hepatopathy (SCH) is an inclusive term referring to any liver dysfunction among patients with SCD. SCH can present with both acute or chronic liver dysfunction, but has primarily been used in the literature to describe the acute hepatic manifestations of SCD. At times, SCH has been used to denote acute intrahepatic cholestasis specifically[1-6].

Acute intrahepatic cholestasis related to SCD is the most severe, and often fatal, form of SCH, associated with a mortality rate approaching 40%. Patients may present with severe acute hepatic crisis with fever, right upper quadrant pain and leukocytosis; however, this condition is characteristically accompanied by significant jaundice and can rapidly progress into ALF. Patients typically experience a dramatic increase in conjugated bilirubin with reported levels ranging between 30 and 273 mg/dL. Hemolysis and acute kidney injury also contribute to hyperbilirubinemia. Liver biochemistries including the aspartate transaminase, alanine transaminase and alkaline phosphatase levels may reach values exceeding1000 mg/dL; however, normal to only slightly elevated values are possible. Coagulopathy, evidenced by elevated prothrombin time, partial thromboplastin time, INR and hypo-fibrinoginemia, is typically seen. Multi-factorial acute kidney injury is commonly observed as well. To date, no cohesive list of diagnostic criteria has been proposed; we propose that multi-system organ failure with extreme hyperbilirubinemia and accompanied by altered mental status in patients with SCD should raise the clinical index of suspicion for acute intrahepatic cholestasis with an ALF phenotype[1,2].

Liver biopsy will typically demonstrate dilated blood sinusoids with clusters of sickled RBCs, associated with fibrosis and as intracanalicular and intraductal cholestasis[1,3,7]. Findings of extramedullary hematopoiesis and Kupffer cell hypertrophy with intracellular engulfed sickled RBCs have also been described in the literature[3]. According to the degree of hypoxic injury, ballooning of hepatocytes, and in more severe cases, widespread anoxic necrosis with areas of acute and chronic inflammation have also been reported[1,8]. Based on the described histopathologic characteristics, it is believed that this condition results from diffuse sickling in the blood sinusoids leading to widespread ischemia, hepatocyte injury and fibrosis[1]. Kupffer cell hypertrophy and extramedullary hematopoiesis may also contribute to liver sinusoidal obstruction with compression of the adjacent bile ducts, contributing to cholestasis.

A recent report in the literature of acute sickle cell intrahepatic cholestasis by Kwun Lui et al[3] described a more complex histological pattern of injury, including a combination of centrizonal fibrosis, occasional occlusion and constriction of the central veins, and sinusoidal fibrosis. This pattern more closely resembles the histological findings of chronic sinusoidal obstruction syndrome and veno-occlusive disease. This finding prompts the suggestion that intrahepatic cholestasis in SCD may result from RBC-mediated damage of small vessel endothelium, resulting in endothelial cell death and subsequent fibrosis of the small hepatic veins and sinusoids. Progression of this process would result in obstruction and distention of the sinusoids. It has been therefore hypothesized that endothelial dysfunction is the direct consequence of ischemic RBC-mediated injury in the small outflow veins and sinusoids.

In patients with SCD and intra-hepatic cholestasis, cause of death is typically related to multi-system organ failure. Therapy is aimed at aggressive supportive measures, including exchange transfusions to replace HbS and correct anemia. Coagulopathy is usually treated with blood product and factor transfusions. Temporary renal replacement therapy may be required for acute kidney injury; renal function should correct with improvement of liver function[1]. If supportive measures fail, LT remains the only viable therapeutic option. Outcomes for patients with intrahepatic cholestasis undergoing LT are summarized in Table 2. Recurrence of this disease process has been reported after LT; the role of hydroxyurea to prevent sickle cell intrahepatic cholestasis is uncertain[9,10].

The risk of vaso-occlusive crisis is increased peri-operatively, and crises may involve the transplanted liver. It has been recommended to initiate exchange transfusion before surgery with an HbS target of < 20%-30% and for the HbS level to be maintained between 8 and 10 g/dL post-operatively in the long term[6,9].

Iron overload is a risk factor for progression of hepatic fibrosis related to chronic HCV infection among transplanted liver organs. Hemosiderosis should be managed by minimizing simple blood transfusions as able, by considering exchange blood transfusion as an alternative, and with iron chelators as indicated. Total body iron stores should be monitored serologically on a regular basis. Liver biopsy remains the gold standard for determination of hepatic iron concentration, however; magnetic resonance imaging in combination with serum ferritin level has been proposed as a non-invasive alternative[11,12]. However, serum ferritin levels may vary over time in the setting of infectious or inflammatory processes, vaso-occlusive crises and liver dysfunction[13]. Chelation therapy is indicated in adults after receiving 20-30 blood units, in patients with a serum ferritin > 3000 ng/mL with a hepatic iron index of > 7-9 mg/g dry weight[14].

The evaluation of abnormal liver biochemistries after LT may be challenging in patients with SCD; it can be challenging to non-invasively differentiate acute and/or chronic rejection and infectious processes from the normal hepatic pathophysiology of SCD. As part of normal SCD physiology, kupffer cells will continue to engulf sickled RBCs, which can lead to congestion of the liver allograft and mild elevation of aminotransferases and bilirubin levels[15]. Furthermore, low grade fever and leukocytosis are commonly seen in patients with SCD during vaso-occlusive crises[16]. Liver biopsy remains the gold standard for evaluation of possible rejection following LT[17].

In conclusion, we present a rare case of acute sickle intrahepatic cholestasis managed with successful LT. This case represents the first report of an HCV NAT positive allograft being transplanted into an HCV negative SCD patient, and is the 23rd reported case of LT in SCD patients overall. Unfortunately, LT will not reverse the underlying pathophysiology of SCD; diligent post-transplant hematologic and immunosuppressive management care is needed in these cases. As our understanding of SCH evolves, paralleling technical advances in LT, post-LT management should be aimed at improving quality of life and optimizing survival.