With the advances and clinical growth in liver transplantation over the last four decades the focus on expanding deceased donor organs has been in need of scientific research. In the past ten years several researchers have looked at the domain of machine perfusion as it applies to deceased donor livers. The following review focuses on the clinical trials and recent advances that will likely have the earliest entrance into the clinical arena.

Core tip: The processes involved in optimizing and expanding the deceased donor liver pool has led to the incorporation of machine perfusion technologies (as is similarly done in kidney transplantation). While none of the systems is approved for clinical use, several have gone through clinical trials. This summary provides an overview of those technologies that are likely to be used in clinical liver transplantation.

Clinical advances in liver transplantation over the last three decades have resulted in more than 10000 liver transplants being performed annually throughout the world, with 1- and 5-year patient survival outcomes in excess of 90% and 70%, respectively[1]. Unfortunately, the increasing incidence of liver disease amongst the general population[2] is contributing to a growing discrepancy between the number of transplantable organs and the number of patients on the liver transplant waitlist. To expand the donor pool requires using marginal donor organs [i.e., donation after cardiac death (DCD) vs brain dead donors (DBD), fatty livers or livers from the elderly with multiple co-morbidities][1]. The consequence of ischemia/reperfusion injury (IRI) in these marginal donor allografts includes an increased rate of primary non-function, early graft dysfunction, biliary complications, decreased long-term graft survival, and increased hospital resource use after transplantation[3]. Strategies to minimize IRI involve focusing on organ preservation techniques. Static cold storage (SCS) is the standard approach to preserve the liver during transit from the donor to the potential recipient. During the last decade machine perfusion has been investigated as a method to modulate liver preservation, improving the function of less optimal grafts, and potentially resuscitating some grafts that previously would have been deemed unsuitable for transplant[4].

While the history of organ perfusion systems goes back decades the first clinical trial of hypothermic machine perfusion (HMP) of the liver was carried out in 2009 by Guarrera et al[5] and it provided evidence of the safety and efficacy of HMP by reducing levels of transaminases and total bilirubin. In a follow-up study the investigators showed that HMP provided safe and reliable preservation in 31 adults undergoing liver transplantation when the organ had previously been declined by other transplant centers[6]. In 2014, hypothermic oxygenation machine perfusion (HOPE) was introduced in a study with donors who were DCD rather than DBD. This study showed that the outcome of DCD liver transplantation after HOPE conditioning was comparable to matched DBD liver grafts in terms of liver transaminases [aspartate aminotransferase/alanine aminotransferase (AST/ALT)], intensive care unit admission and hospital stay, while costs during hospital stay were significantly lower[7]. This same group carried out a larger clinical trial (n = 25) and found that HOPE conditioning of DCD livers significantly reduces graft injury with regard to peak ALT, biliary complications, graft failure and 1-year graft survival compared to SCS[4,8].

The development of normothermic machine perfusion (NMP) as an alternative MP approach led to a 2016 clinical trial with 20 patients[9]. Seven-day median peak AST after transplantation was significantly lower in the NMP group compared to SCS, demonstrating the safety and feasibility of NMP for organ retrieval, transport and transplantation. In 2016, Selzner et al[10] showed that grafts preserved by NMP had lower liver transaminase levels 1–3 d after transplantation, but this result was not statistically different compared with SCS. Similar to what was found in the HMP studies, a 2017 study using NMP enabled assessment and transplantation of 12 livers previously declined for transplant, suggesting that avoiding hypoxia during perfusion prevents post-perfusion syndrome and monitoring biliary pH could predict postoperative cholangiopathy[11]. The largest clinical trial to date was coordinated through the Consortium for Organ Preservation in Europe. In a multi-center, randomized control trial involving 220 adult DBD and DCD donors normothermic preservation is associated with a 50% lower level of graft injury, measured by hepatocellular enzyme release, despite a 54% longer mean preservation time and an expanded donor pool (50% lower rate of organ discard). There was no significant difference in bile duct complications, graft survival or patient survival. In summary, this study successfully proves the investigators’ primary endpoint of lower peak serum AST levels in the NMP group implying a benefit in livers used for transplantation[1]. A summary of the clinical trials to date is presented in Table 1[3,5,6,8,12,13].

With the increasing prevalence of obesity, a growing number of livers with macrosteatosis will be considered for transplant. A major area where machine perfusion will be useful involves a defatting strategy. The aim of this strategy is to reduce the triglyceride load in steatotic hepatocytes, improve the organ metabolism and lessen the impact of ischemia-reperfusion injury. Machine perfusion reduces intracellular lipids by enhancing lipid metabolism, lipolysis and increasing the cellular exportation of intracellular triglyceride as very low‐density lipoprotein and the fatty acid mitochondrial β‐oxidation; when used in conjunction with defatting agents[14,15]. This process helps to lower the production of reactive oxygen species, decreased cellular injury and improved microcirculation.

Machine perfusion (Figure 1) has the potential to transform the field of liver transplantation by allowing clinicians to expand the donor pool while reconditioning the organ prior to implantation. 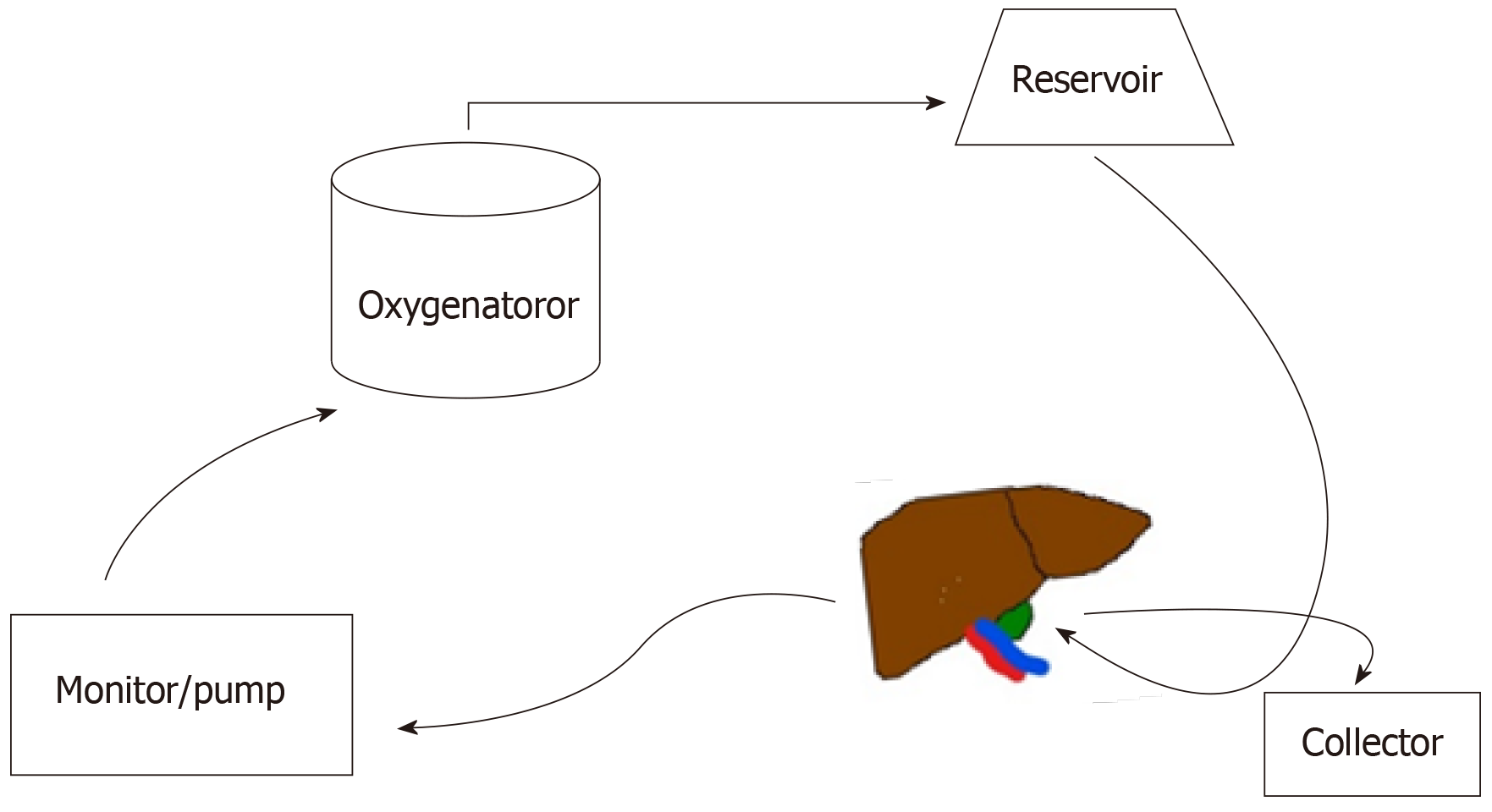 Figure 1 Schematic design of machine perfusion. Demonstrating system circulation and pumps with the ability to oxygenate the perfusate. Flow comes into the liver through the portal vein with bile collected separately.
Footnotes