AIM: To investigate the role of hepatoma-derived growth factor (HDGF) in liver development, especially in the hepatocyte differentiation.

RESULTS: The HDGF transgenic mice developed normally and showed no apparent abnormality in the liver. However, the gene expression patterns of the liver in adult transgenic mice were similar to those of the neonatal liver in control mice.

Hepatoma- derived growth factor (HDGF) is a heparin-binding protein, which has been identified from the conditioned media of HuH-7 hepatoma cells[8,9]. HDGF stimulates the proliferation of fibroblasts, endothelial cells, vascular smooth muscle cells and hepatocytes[8-11]. Its primary sequence contains nuclear localization signals and the HDGF can be transported to the nucleus, thus indicating that HDGF is a unique nuclear/growth factor[12,13]. Recently, several novel genes have been identified for proteins which share a highly homologous amino terminal region consisting of about 100 amino acids; so-called HDGF- related proteins (HRPs)[14,15]. It is thought that HDGF and HRPs form a new gene family. Although HDGF was initially identified in human hepatoma-derived cells, HDGF mRNA is expressed in various normal adult tissues of mice and humans, thus suggesting that HDGF has some physiological functions in non-tumor cells[9].

Previous studies have suggested that HDGF participates in fetal organ development and adult tissue repair as an autocrine growth factor[10,11,16]. We have shown that HDGF is highly expressed in immature fetal hepatocytes and promotes their proliferation[16]. Furthermore, HDGF is induced in two animal models of liver regeneration[17], suggesting that HDGF plays an important role in the proliferation of both fetal and adult hepatocytes. Although the involvement of HDGF in cell differentiation has not been clarified, the suppressive effects of HDGF on gut cell maturation have been suggested[18]. We generated transgenic mice which overexpressed HDGF in hepatocytes under the control of the albumin promoter/enhancer, in order to examine the functional role of HDGF in liver development. The gene expression patterns of hepatocytes in adult transgenic mice resemble those of neonatal hepatocytes of wild-type mice, thus suggesting that HDGF-overexpression partially suppresses hepatocyte maturation.

The DNA fragment covering the entire coding region of mouse HDGF was cloned into the Eco RI site of an expression vector which contains the promoter and enhancer of the mouse albumin gene[19]. A schematic representation of the constructed transgene (Alb-HDGF) is illustrated in Figure 1. Transgenic founders were generated by pronuclear injection according to standard techniques. Using a 32P-labeled fragment of HDGF-specific cDNA as a probe, transgene integration and expression were identified by Southern and Northern blot analyses, respectively. C57BL/6CrSlc mice (Nihon SLC, Shizuoka, Japan) or non-transgenic mice were used as controls. All animal experiments were performed according to the guidelines of Osaka University Medical School.

Genomic DNA was isolated from individual mouse tails, and then was blotted onto nylon membranes according to standard protocols. Total RNA was extracted from liver tissues using ISOGEN (Nippon Gene, Tokyo, Japan), denatured with formamide and blotted onto nylon membranes. The mouse cDNAs described above were labeled with (α-32P) dCTP using a Megaprime DNA labeling kit (Amersham Life Science, Tokyo, Japan) and then were used for hybridization[16,17].

An expression unit was constructed that contained the entire HDGF cDNA under the control of the mouse albumin promoter/enhancer (Alb-HDGF, Figure 1). Purified fragments were used for pronuclear injection and potential founders were analyzed for the genomic integration(s) of the transgene. Three founders containing the Alb-HDGF sequence were identified by Southern blot, and the transgenes were successfully transmitted in two lines (Figure 2A: Tg-48, and Tg-21). Northern blot analysis revealed that HDGF was highly expressed in the adult liver of Tg-48 mice, whereas HDGF expression in the liver of Tg-21 mice was almost equal to the wild-type mice (Figure 2B). We therefore used the Tg-48 mice to analyze the effects of HDGF overexpression in hepatocytes.

Figure 2 Genomic integration and mRNA expression of the HDGF-transgene. A: Southern blot analysis with HDGF cDNA probe. Genomic DNA was isolated from individual mouse tails and Southern blot analysis was performed according to standard methods. The bands representing endogenous HDGF and transgenes are shown. Genomic DNA of a transgenic mice (line number 21: Tg-21) contains high copy numbers of the transgene. Genomic DNA of the other transgenic mice (line number 48: Tg-48) contains low copy numbers of the transgene; B: Northern blot analysis with HDGF cDNA probe. Total RNA was isolated from liver tissues of both transgenic (Tg) and wild-type (WT) mice. Twenty micrograms of total RNA extracted was loaded and hybridized with mouse cDNA of the HDGF-specific sequence. HDGF expression was high in the liver of the Tg-48 mouse. The expression level of HDGF in the liver of Tg-21 was almost equal to the level expressed in the control liver. Ribosomal RNA of 18S is shown in the lower panel. 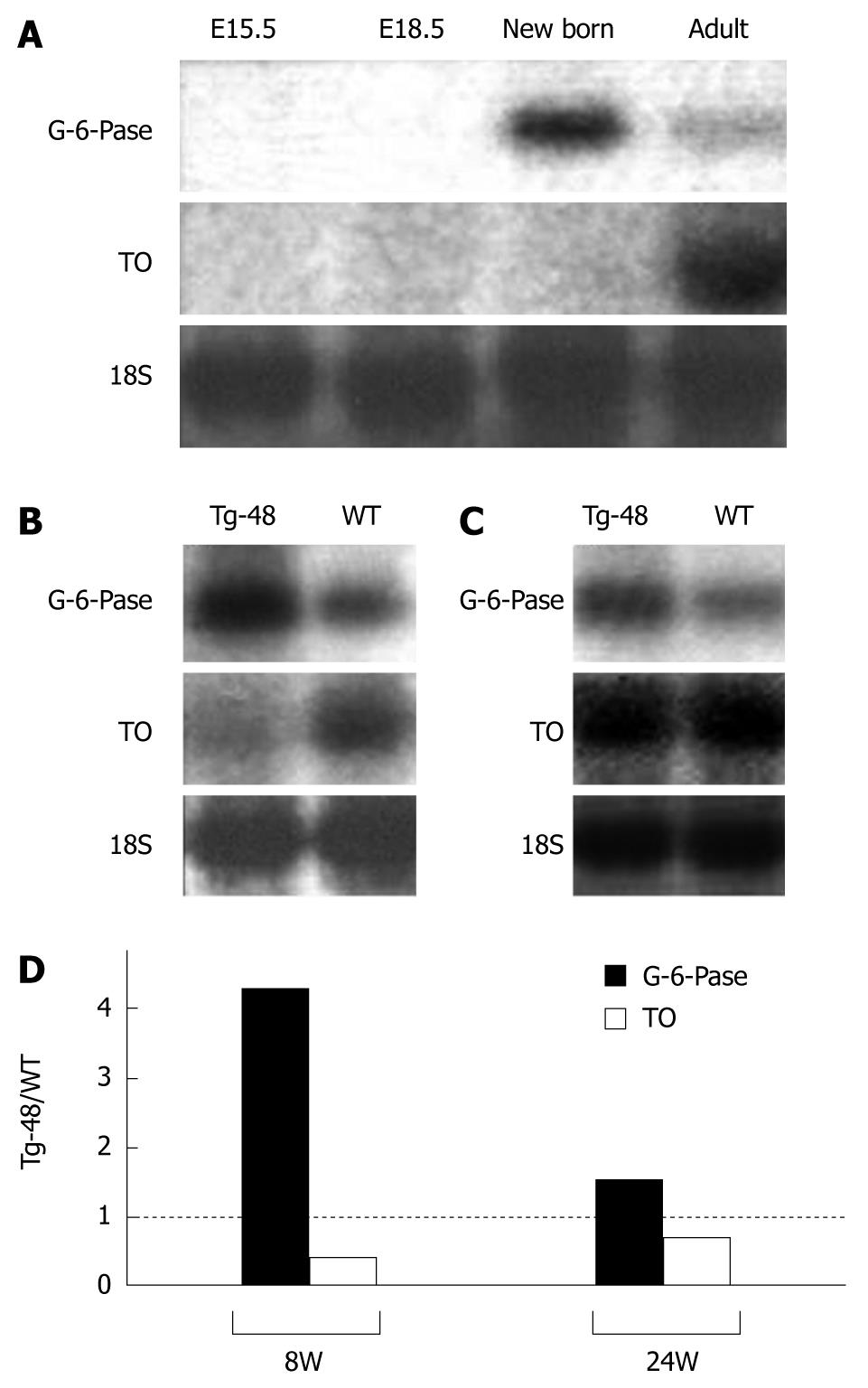 A number of studies have suggested that HDGF is involved in the development of various organs[10,11,16,18,21]. We have demonstrated that HDGF is a unique growth factor, which is highly expressed in fetal liver and promotes fetal hepatocyte proliferation[16]. However, familial genes often compensate for the functions of other family members, and HDGF-null mice have been reported to show no obvious phenotype, perhaps as a result of the redundant functions of HDGF related genes[22]. We therefore generated the HDGF transgenic mice and examined the functional role of HDGF in vivo according to the gain-of-function method.

In the present study, the overexpression of HDGF under the control of the albumin promoter did not cause any apparent morphological abnormalities in the liver. However, the gene expression patterns showed the possibility that the maturational process of hepatocytes during the post-natal stage was disturbed. This result is consistent with the report by Lepourcelet et al[18], which documented that overexpression of HDGF in the mouse fetal gut explants retards epithelial differentiation, suggesting a suppressive role of HDGF in epithelial differentiation.

Several proteins strongly expressed in both tumors and fetal organs, such as carcinoembryonic antigen and AFP, are known as oncofetal proteins[23,24]. HDGF is expressed exclusively in both fetal and cancer tissues, indicating that HDGF can also be regarded as an oncofetal protein. Although several oncofetal proteins are clinically used as tumor markers, there are few proteins whose functional roles in cancer cells have so far been demonstrated. HDGF expression is strongly associated with the prognosis of many malignant diseases including pancreatic cancer, esophageal cancer, colorectal cancer, gastrointestinal stromal tumor, gastric cancer and heptocellular carcinoma (HCC)[25-31]. Recently, Lee et al[32] showed that individuals with HCC who shared a gene expression pattern with fetal hepatoblasts had a poor prognosis. The gene expression pattern that distinguished this subtype from other types of HCC contained the markers of oval cells (hepato-cholangio progenitor cells), thus suggesting that the HCC of this subtype may be derived from hepatic progenitor/stem cells. Two groups have shown that high expression of HDGF is closely related to the poor prognosis of HCC[30,31] and HDGF stimulates the growth of immature fetal hepatocytes[16]. Recently, we have found that HDGF is highly expressed in oval cells and promotes their proliferation (Iwamoto et al. in preparation), thereby suggesting the involvement of HDGF in the proliferation of immature hepatic cells. Therefore, HDGF may stimulate the proliferation of HCC cells derived from hepatic progenitor/stem cells and thereby cause the poor prognosis. HDGF expression may maintain the characteristics of immature cells and be associated with high growth activity of malignant cells. HDGF not only promotes hepatocyte proliferation but also inhibits their differentiation, indicating that HDGF is an oncofetal protein which participates both in the cellular growth and differentiation. Clarifying the functional role of HDGF would give us new insights into molecular mechanisms common to normal and malignant hepatic cell growth.

Since HDGF-null mice did not show any remarkable abnormalities, perhaps as a result of the compensation by HDGF-related genes, the down-regulation of HDGF should inhibit the growth of cancer cells without any serious side effects on normal organs. Therefore, HDGF is considered to be a candidate therapeutic target. Although little is known about the regulation of HDGF expression, we recently have found that Vitamin K2 negatively controls the transcription of HDGF in hepatoma cells[33]. However, the suppressive effects of the Vitamin K2 are limited and it is necessary to elucidate the whole regulation of the HDGF expression in hepatic cells, especially in hepatoma cells.

In conclusion, HDGF overexpressing transgenic mice showed the possible inhibitory role of HDGF on hepatocyte differentiation. The identification of both the regulation and signal transduction of HDGF makes it possible to obtain a better understanding of liver development, regeneration, and carcinogenesis.

During liver development, immature hepatocytes differentiate and acquire many metabolic functions. However, few studies have documented the growth and differentiation of post-natal hepatocytes.

In this article, transgenic mice were established which overexpressed HDGF in hepatocytes under the transcriptional control of the mouse albumin promoter/enhancer. This is the first report about the transgenic mouse of HDGF. Furthermore, this is the first study to clarify the functional role of HDGF in the hepatocyte maturation.

The results show the possibility that HDGF may maintain the characteristics of immature cells with high growth activity. This study might represent a future strategy for the prevention or treatment of the diseases by the targeting of HDGF.

HDGF is a heparin-binding acidic glycoprotein consisted of 240 amino acids, which is identified from the conditioned media of HuH-7 hepatoma cells. HDGF plays an important role in the organ development and tissue repair. HDGF has been demonstrated to be a unique growth factor involved in liver development, regeneration and carcinogenesis.

On the whole, this study holds novelty and importance in understanding the process of hepatocyte maturation. While the study seemed well conducted, it is not sure from the text whether repeated analysis of Western blot has been conducted and to what extent the G-6-Pase and TO expressions were raised or dropped with time. I suggest densitometry measurements of repeated Western blot analysis and to provide a bar chart on the normalized readings.

We thank T Komori (Nagasaki University) for the helpful discussion.