Neoplastic seeding may arise after diagnostic or therapeutic percutaneous procedures for hepatocellular carcinoma. The true incidence of seeding with hepatocellular carcinoma is difficult to assess precisely, but a significant risk of seeding exists and is greater when performing diagnostic biopsy as compared to therapeutic percutaneous procedures [radiofrequency ablation, radiofrequency ablation (RFA); percutaneous ethanol injection, Percutaneous ethanol injection (PEI)]. Whenever liver transplantation is feasible, diagnostic needle biopsies should be avoided, but RFA and PEI are often needed as “bridge” treatments. The role of adjuvant treatments in reducing the incidence of seeding following RFA or PEI requires further evaluation.

Hepatocellular carcinoma (HCC) is a challenging malignancy of global importance. It is the sixth most common cancer, and the third most common cause of cancer-related death worldwide[1]. The incidence rates for HCC in the United States and Western Europe have been increasing[2,3].

Cohort studies and cost-efficiency modelling have suggested that ultra-sonographic surveillance of well-defined cirrhotic patients may decrease tumor-related mortality[4,5]. According to EASL and AASLD criteria[5], a diagnosis of HCC can be made in most cases with a non-invasive strategy. In fact, advances in cross-sectional imaging have led to a drastic limitation in the requirement for biopsy of focal lesions in the cirrhotic liver[6,7]. In this setting, good quality contrast enhanced computed tomography (CT) and magnetic resonance imaging (MRI) are generally highly accurate for the diagnosis of HCC[8,9]. However, biopsy remains very important in patients with a liver nodule without typical radiological features (hypervascularization in arterial phase followed by venous wash-out in portal/venous phase)[5,10], or when α-fetoprotein levels are not diagnostic of HCC (Figure 1). 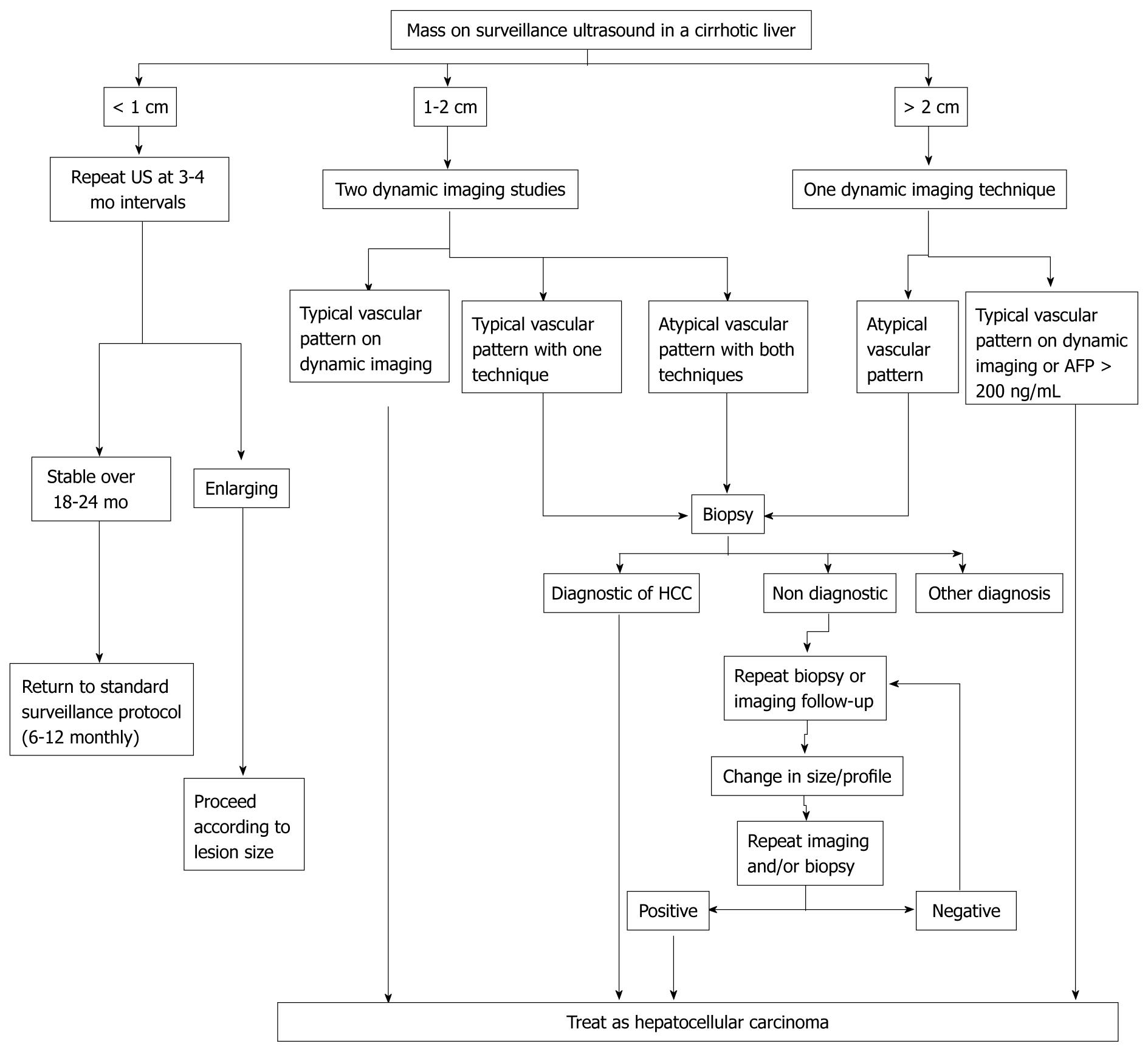 Figure 1 Suggested algorithm for evaluation of a liver mass detected during hepatocellular carcinoma surveillance in a patient with cirrhosis according to the American Association for the Study of Liver Diseases (AASLD) guidelines[5].

Although diagnostic biopsy rates have diminished, biopsy is still widely used and is often considered mandatory for patient management by oncologists[11]. Furthermore liver biopsy may give prognostic information[12,13] regarding malignant potential and may be required for allocation systems in liver transplantation programmes.

Despite many efforts to prevent and screen for HCC, only 20%-30% of patients present with early stage disease amenable to curative treatments, including surgical resection and liver transplantation (LTx)[14]. Radiofrequency ablation (RFA) was introduced as an alternative locoregional therapy to ethanol injection. It can achieve high local cure without deteriorating background liver function. RFA is now a valid alternative to resection, and can be used as an adjuvant therapy, or as a bridge to transplantation[15]. Percutaneous ablation (PEI, RFA) achieves complete responses in more than 80% of tumors smaller than 3 cm in diameter, but only in 50% of tumors between 3 and 5 cm in size[16,17]. Five-year survival rates reported after PEI or RFA are 40%-70%[18,19] RFA is preferred to PEI in patients with tumors < 4 cm. because of lower recurrence, lower number of sessions, and longer disease-free survival. A recent meta-analysis[20] has shown that RFA ablation is superior to PEI in the treatment of small HCC with respect to overall survival, 1, 2, and 3 year survival rates, 1, 2, and 3 cancer-free survival rates, and tumor response. RFA entails a significantly smaller risk of local recurrence than PEI.

Percutaneous diagnostic or therapeutic procedures play an important role in the management of patients with hepatocellular carcinoma. These procedures are used to diagnose and/or provide specific therapy. All procedures, whether medical or surgical, have inherent risks, and the risks must always be weighed against the anticipated benefits. Both patients and physicians must assume that there is some risk involved when they undertake any procedure including a percutaneous approach for HCC. Complications of percutaneous procedures are sometimes unavoidable. Nonetheless, strict attention to detail and knowledge of potential complications and their risk factors can minimize their occurrence. The incidence of specific complications is difficult to assess and depends on a number of variables that are not always comparable across studies.

Malignant seeding is a well known complication of both diagnostic and therapeutic procedures in patients with HCC. Needle tract seeding of a liver tumor was previously defined as the development of new neoplastic disease outside the liver capsule, either in the subcutaneous soft tissues of the abdomen, intercostal muscle (Figure 2) or peritoneum[21]. A review[22] identified several suspicious mechanisms that can contribute to seeding after percutaneous procedures: tumor cells may adhere to a biopsy needle or to an electrode during its retraction; tumor cells may also be carried into the track with a little bleeding; furthermore, cells may be forced into the track by sudden increase in intratumoral pressure which is frequently encountered during RFA; finally, cells may be driven in, when saline is injected during or before RFA.

The real incidence of seeding with HCC is difficult to assess precisely. Several studies tried to assess critically the seeding rates after diagnostic and therapeutic procedures, but results are very heterogeneous. Rates of seeding after biopsy range greatly. While modest rates of tumor dissemination of 0.003%-0.009% have been described[23-25], a review on the subject has described incidences of 5%[26]. A recent systematic review and a meta-analysis[27] on needle track seeding following biopsy of liver lesions indicative of HCC showed that the incidence is 2.7% overall [95% Confidence Interval (CI), 1.8-4], and 0.9% per year (95% CI, 0.6-1.3). An important issue of this work is that all diagnosed seedings included in the review, were confirmed histologically.

With increasing use, tumor seeding after percutaneous RFA becomes a major concern, particularly in patients who have a chance of a cure. Llovet et al[28] reported a high rate (12.5%) of tumor seeding in 32 patients with HCC treated with RFA which was preceded by a needle biopsy. Neoplastic seeding was associated with subcapsular HCC location, poorly differentiated tumors, and high alpha-fetoprotein levels. Livraghi et al[29] reported a low rate of tumor seeding (0.9%) in 1314 patients with a median follow-up of 37 mo, using the same RFA technology as Llovet et al[28] and showed that only previous biopsy was significantly associated with tumor seeding. The low risk of seeding after RFA (0%-1.4%) has been confirmed in other recent studies[30]. In a recent study from our group[31], the risk of seeding of hepatocellular carcinoma after radiofrequency ablation was small (1.1% per patient, 95% CI, 0.19-5.84; 0.7% per procedure, 95% CI, 0.12-3.80).

The cause of the high seeding rate reported in the study by Llovet et al[28], not confirmed in subsequent studies, remains unclear, but could be due to the shallow position of the nodules (in fact all patients presenting seeding after RFA in the Llovet et al[28] cohort had a subcapsular location).

The time to the diagnosis of seeding ranged from 7 mo for combined percutaneous diagnostic and therapeutic approaches to 13 mo for biopsy alone. From their literature review, the Authors concluded that the risk of the percutaneous approach to HCC is clinically relevant, and that biopsy of HCC in patients with cirrhosis should not be routine clinical practice. Today, there remains no molecular means for classification of HCC. So, we think that suspicious nodule biopsy remains an important research tool to identify new biological variables to achieve a more accurate prognosis of patients with HCC.

Numerous factors are related to the risk of neoplastic dissemination after invasive procedures: larger diameter needles[33]; more passes[33]; perpendicular approach[34]; subcapsular tumor location; biopsy prior RFA; intrinsic metastatic properties of the tumor[35] related to either or both tumor size or aggressivity, and patient immunodepression[36].

In none of the cases of seeding reported in the meta-analyses of Silva et al[27] did the seeding event impact on the patient’s survival when the lesion was treated successfully by resection and local ablation. Moreover, Livraghi et al[29] have reported successful treatment of tumor seeding after RFA by a combination of surgical resection, PEI and RFA and concluded that in no patient did the presence of tumor seeding have a negative impact on survival. Similarly, in the study of Imamura et al[37] the cumulative survival rates in HCC patients with neoplastic seeding were 81% at 1 year and 45% at 2 years. The Authors concluded that, taking into consideration the relatively low incidence of neoplastic seeding, the risk of neoplastic seeding after RFA would be considered an acceptable clinical risk.

We have found only one report[38] on malignant seeding after orthotopic liver transplantation, secondary just to pre transplant biopsy. No information about the patient’s survival are given.

RFA and PEI are associated with a low risk of neoplastic seeding, although the risk of seeding is significantly increased if needle biopsy has been performed before treatment.

Seeding does not have a major negative impact on survival. However, if liver transplantation is a feasible option in the patient’s management needle biopsy should be avoided. In fact, assuming a role of the host immune response or of tumor aggressiveness for the low rate of needle seeding, an immunosuppressed condition, as in the post transplant status, could lead to a worsening of survival with a rapid extrahepatic diffusion.

Other strategies, apart from biopsy, such as evaluating new imaging techniques for more precise pre-transplant diagnosis (against explant histology), or simply waiting for a defined period with repeated imaging, may also be effective.

By the same token RFA and PEI, which are often needed as “bridge” treatments for patients on the transplant list, can be used safely without unneeded fears of disseminating the tumor outside of the liver. Additional studies with an adequate duration and quality of follow-up will be paramount to exclude late-onset seeding.

As a future field of research, the incidence of seeding after percutaneous treatments of HCC with new adjuvant treatments such as the antiangiogenic drugs will need to be evaluated.