As a result of having undergone computed tomography (CT), a 75-year-old woman with type-C liver cirrhosiswas shown to have two tumors on the ventral and dorsal sides of subsegment 3 (S3). The tumor on the ventral side was diagnosed as a classic hepatocellular carcinoma (HCC), while that on the dorsal side was considered atypical for a HCC. Although the indocyanine green (ICG) findings indicated poor hepatic reserve, the prothrombin time (PT) was relatively good. An operation was performed in February 2007; however, this resulted in exploratory laparotomy. Dynamic CT performed 12 mo after the operation revealed that the tumor on the dorsal side of S3 had apparently increased. The marginal portion of the tumor was shown to be in the early and parenchymal phases, while the internal portion was found to have grown only slightly in the delayed phase. We diagnosed this tumor as a cholangiocellular carcinoma (CCC). S3 subsegmentectomy was performed in April 2008. The tumor on the ventral side was pathologically diagnosed as a moderately differentiated HCC, and that on the dorsal side was diagnosed as a CCC. We can therefore report a rare case of synchronous development of HCC and CCC in the same subsegment of the liver in a patient with type-C liver cirrhosis. We also add a literature review for all the reported cases published in Japan and around the world, and summarize the features of double cancer exhibiting both HCC and CCC.

A 75-year-old woman diagnosed with chronic hepatitis or liver cirrhosis (type C) had been followed as an outpatient since 1982. Although endoscopic variceal ligation and endoscopic injection sclerotherapy (EIS) had been carried out several times, the esophageal varices ruptured in December 2002. Five EIS treatments were thenfollowed, after which the condition of the patient maintained static, that is, without the esophageal varices showing red.

Dynamic computed tomography (CT) of the liver performed on December 18, 2006, revealed two tumors, each 1 cm or less in diameter, on the ventral and dorsal sides of S3 (Figure 1A-C). The patient was hospitalized for further examination and therapy in January 2007. We could not detect the tumors by ultrasonography and were unable to perform a tumor biopsy. With abdominal angiography, the left hepatic arterial angiogram (LHAG) showed no tumor stain on S3 and the superior mesenteric arterial angiogram (SMAG) showed a large shunt through the epigastric vein during the portal phase (Figure 1D). CT during arterial portography showed a 1 cm defect on the ventral side of S3; however, no defect was evident on the dorsal side (Figure 1E). Because CT had shown the tumor on the ventral side of S3 to be densely enhanced in the early phase and washed out in the delayed phase, we diagnosed the tumor as a classic HCC. The values for indocyanine green (ICG) dye retention at 15 min (R15) and elimination (K) were 32.0% and 0.070, respectively. However, because prothrombin time (PT) was 82.7%, indicating good hepatic reserve, the operation was performed in February 2007. Since the epigastric veins were overdeveloped, the liver appeared very cirrhotic and we were unable to detect the two masses by intraoperative ultrasonography. The first operation therefore resulted in exploratory laparotomy. 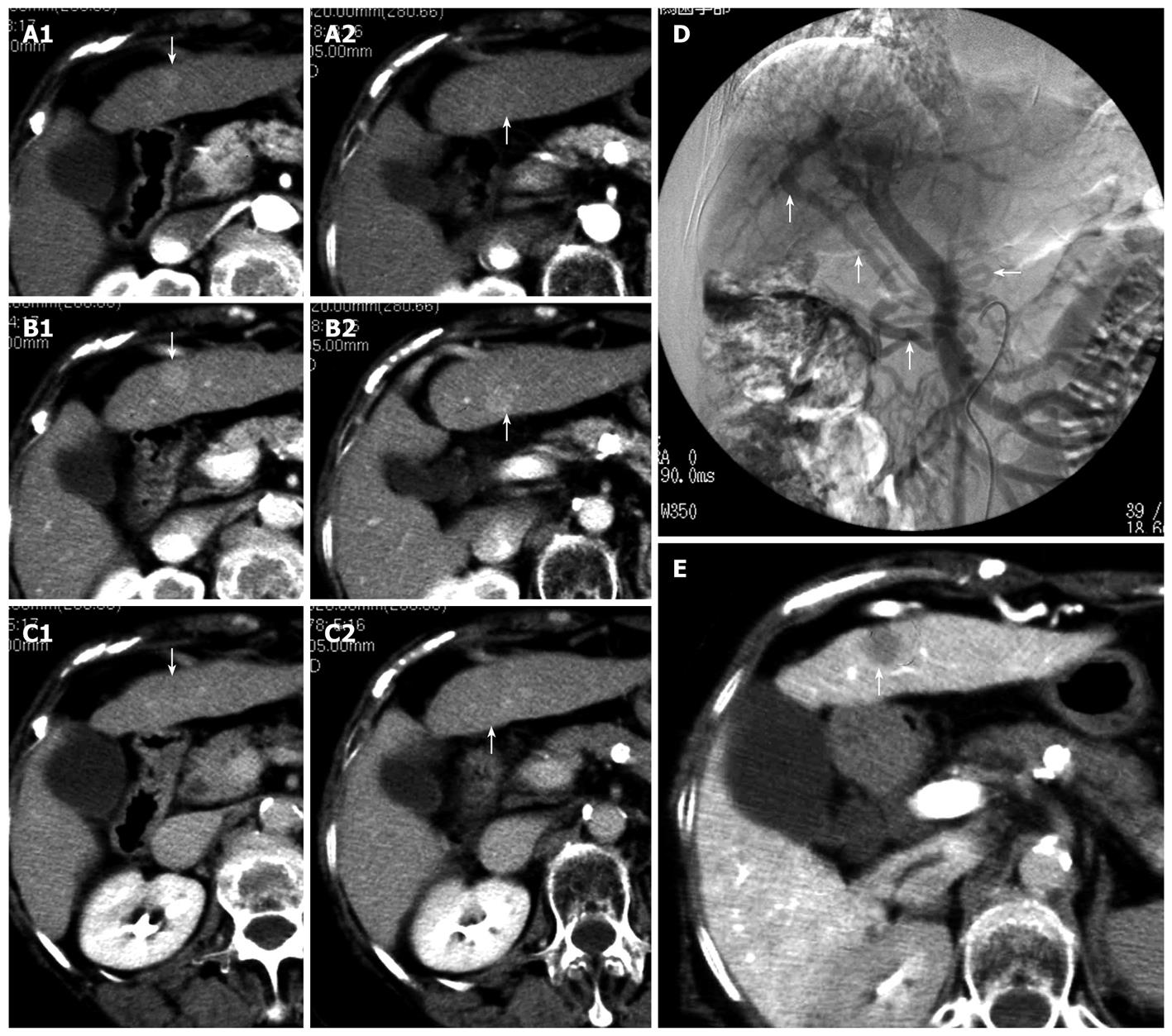 Figure 1 Dynamic computed tomography findings at the onset of double cancer with hepatocellular and cholangiocellular carcinomas. Two tumors, ~1 cm in diameter, were detected on the ventral and dorsal sides of S3. Arrows indicate the tumors (A1, A2 arterial phase; B1, B2 parenchymal phase; C1, C2 delayed phase). Angiographic findings at the onset of double cancer; D: A superior mesenteric arterial angiogram showing a large shunt through the epigastric vein during the portal phase (the arrows); E: Computed tomography during arterial portography (CTAP) showing a ~1 cm defect on the ventral side of S3 (the arrow), which was diagnosed as a classic hepatocellular carcinoma. No defect can be seen on the dorsal side of S3. 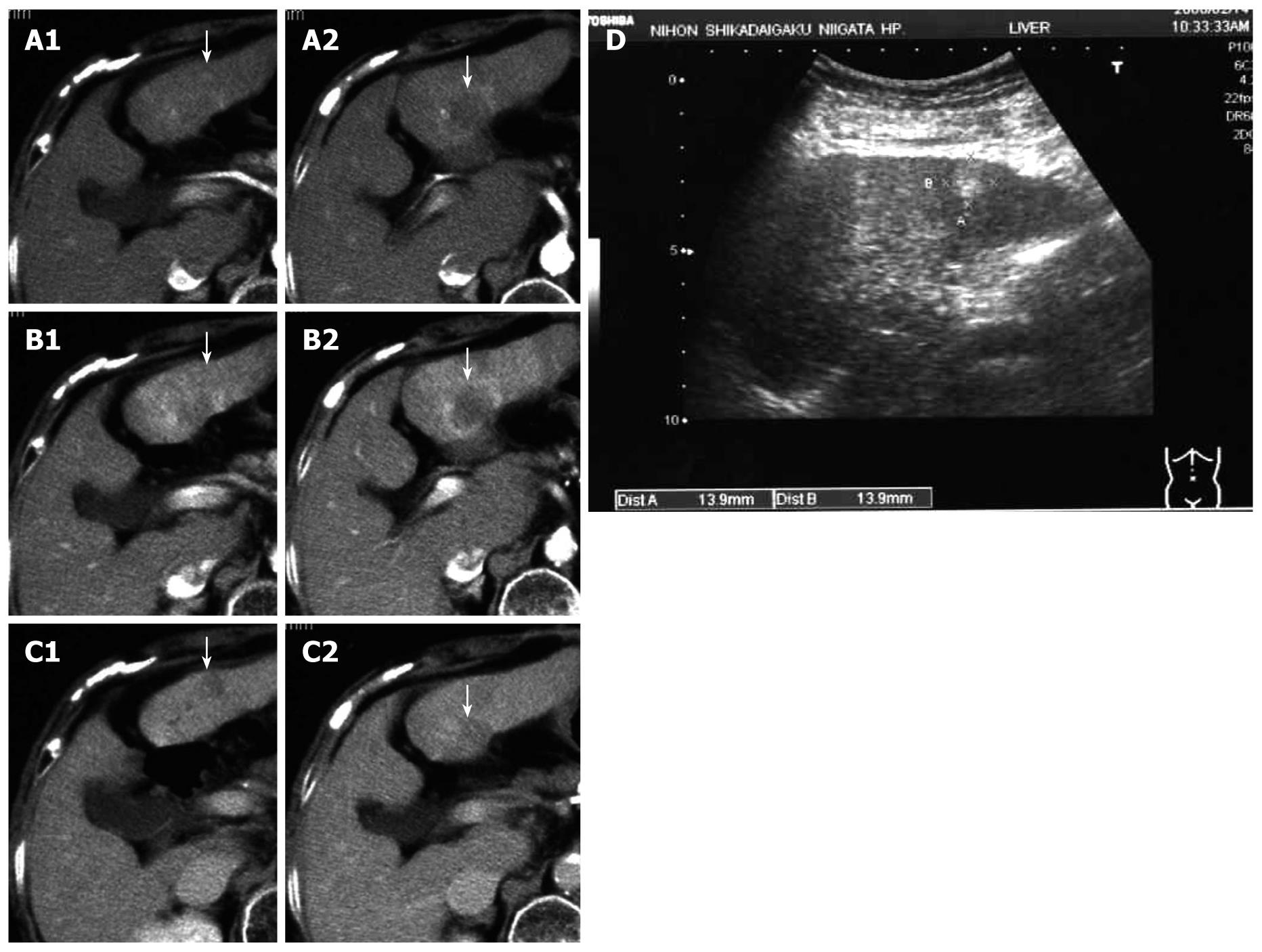 S3 subsegmentectomy was performed in April 2008 (Figure 3A and B). The tumor on the ventral side was pathologically diagnosed as a moderately differentiated HCC (with nodular, trabecular, and plate-like components) (Figure 3C) and that on the dorsal side was diagnosed as CCC (diffuse type showing a vestigial remnant of the tumor) (Figure 3D). Pathological examination also confirmed that the larger CCC tumor on the dorsal side was partially in contact with the HCC tumor on the ventral side of S3 (Figure not shown). We administered two courses of chemotherapy with gemcitabine hydrochloride (Gemzar®, Eli Lilly Japan, Kobe, Japan) followed by oral administration of S-1 (TS-1®, Taiho Pharma, Tokyo, Japan). 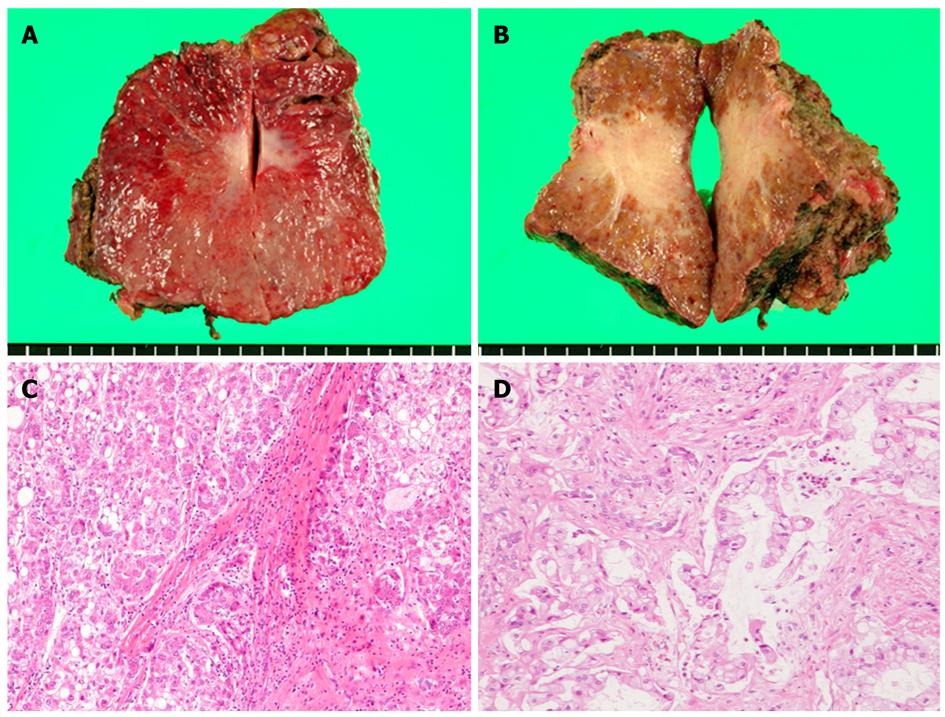 The present report describes a case of synchronous development of HCC and CCC in the same subsegment of the liver. Only three similar cases[19,22,30] have been previously reported, and this condition is considered to be very rare. According to several earlier reports[37-39], hepatitis C virus (HCV)-related chronic hepatitis and cirrhosis are major risk factors for both HCC and CCC. The patient described in this report was found to be positive for HCV.

Earlier research has suggested the existence of amphi-potential progenitor cells that can differentiate into hepatocytes as well as cholangiocytes[40].

The following points may explain the mechanism underlying the development of combined HCC and CCC: (1) during the differentiation of the tumor into the two cancer phenotypes HCC and CCC, a trigger may cause the amphi-potential progenitor cells to turn malignant, undergo proliferation, and become tumorous in the same lesion, and (2) the cells that have already differentiated and matured into hepatocytes and cholangiocytes may become malignant and undergo proliferation in the presence of chronic liver inflammation. In the present case, although the cells involved belonged to the same subsegment of the liver, these cells could have metachronously turned malignant, undergone proliferation, and become tumorous, resulting in a synchronous double cancer (HCC-CCC) by either of the mechanisms described above.

In the present case, on performing dynamic CT in December, 2006, HCC and CCC were observed as being situated far from each other. However, we had pathologically confirmed that the larger CCC on the dorsal side was partially in contact with the HCC on the ventral side of S3 in the resected specimen, thus demonstrating that these tumors constituted a combined type of HCC-CCC, which had developed from different lesions in the liver. In this paper we have described the entire course of the two tumors involved in a combined type of HCC-CCC, making these findings valuable for research as well as clinical purposes.

The usual gross appearance of a mass-forming CCC is a large, white, firm tumor that is solid and fibrous, with a sclerotic appearance on the cut surface of the specimen, accompanied by a frequent finding of dense fibrous stranding in the central portion[41]. In most cases of mass-forming CCCs, ultrasonography reveals a hypoechoic mass with satellite nodules around the tumor[42]. However, the echo patterns are diverse and non-specific[43]. Dynamic CT and magnetic resonance imaging (MRI) reveal rim-like or band-like peripheral contrast enhancement of variable thickness around the tumor during the early phase, with progressive and concentric filling of the contrast material at a later phase[44]. CCCs appear hypointense on T1-weighted images and hyperintense on T2-weighted images[45,46].

In the present case, the size of the CCC was small (1 cm in diameter) when first discovered. We could not detect the tumor by ultrasonography because of overdeveloped epigastric veins, and were unable to identify the typical findings of an enhanced marginal portion in the early phase and the gradual enhancement of the internal portion in the delayed phase. The existence of this tumor was therefore questionable. However, abdominal ultrasonography performed 12 mo after the first operation showed a heterogeneously hyperechoic area with irregular margins on the dorsal side of S3. Dynamic CT of the liver performed during the same period showed a rim-like or band-like enhancement around the tumor in the early phase and a slight enhancement of the central portion of the tumor in the delayed phase. We preoperatively diagnosed the tumor on the dorsal side of S3 as a CCC. Early diagnosis of CCCs is very important for an improvement in prognosis. We hope that imaging studies will eventually be conducted for preoperative diagnosis of CCCs that are ≤ 1 cm in diameter.

In the present case, however, because of progressive liver cirrhosis, with poor hepatic reserve and an enlarged lateral segment of the liver, we performed an S3 subsegmentectomy. Because type-C liver cirrhosis generally results in poor hepatic reserve, it is imperative to consistently monitor the development of not only HCCs, but also CCCs, and facilitate early detection and treatment by curative hepatectomy.

Across the 33 previously reported cases, the mean maximum size of the HCC and CCC tumors (if the tumors were multiple) were 3.9 ± 2.7 cm and 3.3 ± 3.0 cm, respectively. According to the pathological diagnosis of the non-cancerous portions of the liver, 19 cases (57.6%) were diagnosed with chronic hepatitis and 12 (36.4%) with liver cirrhosis. Double cancers were more likely to develop from chronic hepatitis than from liver cirrhosis. We think that the cases that undergo appropriate examinations and successful treatments because of their higher hepatic reserve tended to get reported and documented. There is thus a possibility of bias in the selection of the reported cases. Most such cases underwent surgery (24 out of 30 cases or 80.0%); the other treatment techniques performed included transcatheter arterial embolization, hepatic arterial infusion therapy, surgery plus percutaneous ethanol injection therapy, and surgery plus microwave coagulation therapy and liver transplantation. The surgical procedure is planned according to the hepatic reserve; many cases of double cancer with HCC and CCC were treated surgically by curative resection.