CONCLUSION: PLLA scaffold supports adhesion, proliferation and osteogenic differentiation of hDPSCs. Hence, it may be useful in combination with hDPSCs for cell-based reconstructive therapy.

Core tip: Recently, the plasticity of postnatal stem cells from dental origin including human dental pulp stem cells (hDPSCs) has been suggested. Their osteogenic potential makes them valuable for craniofacial bone regeneration. hDPSCs can be easily isolated from dental medical wastes, extracted teeth, and expanded ex vivo. Combination of numerous postnatal stem cells and three-dimensional scaffold biomaterials has been used in bone tissue engineering. Selection of an ideal scaffold biomaterial is a challenging part of reconstructive surgeries. Current study aims to evaluate behavior of hDPSCs including adhesion, proliferation, morphology and differentiation on four different scaffold biomaterials. Our finding indicates that PLLA (Synthetic) scaffold supports adhesion, proliferation and osteogenic differentiation of hDPSCs. Therefore, it can be useful for the purpose of craniofacial tissue engineering.

Non-healing craniofacial defects occur frequently due to various factors such as trauma, infection, tumor, and congenital deformities[1,2]. The treatment of large bone defects has been posed a challenge for reconstructive surgeons. The conventional treatment approach for treatment of craniofacial bone defects is harvesting and transplanting autogenous cancellous bone graft, particularly from ilia crest[3]. However, the surgical procedures are invasive and it usually associated with donor site morbidities and limited availability[4,5]. Another approach is utilization of allogeneic bone which is also limited by the risk of immunogenicity or disease transmission[6]. The concept of harvesting adult stem cells (ASCs) in combination with appropriate three-dimensional (3D) scaffolds have been proposed as a promising alternative approach in reconstructive surgery[7-12].

ASCs have been isolated from various tissues. In dental clinic teeth are often need to be extracted in order to avoid further complications including orthodontic treatments. Human dental pulp has been harvested from extracted teeth and shown to contain multilineage population of progenitor/stem cells, dental pulp stem cells (hDPSCs)[13,14]. The differentiation capability of hDPSCs towards the osteoblast lineage and their accessibility and ease of ex-vivo expansion make them suitable cell source to be considered for repair of skeletal defects[15,16].

Bone formation from hDPSCs is required a 3D structure provided by scaffolds. An ideal scaffold should provide an appropriate environment for cellular attachment, growth, and differentiation. A wide range of scaffold biomaterials have been developed for variety of applications in tissue engineering[17]. Scaffolds can be categorized as following groups: (1) Allograft; (2) Xenograft; (3) Synthetic; and (4) Composite biomaterials. In order to select a suitable scaffold for craniofacial engineering, it is necessary to evaluate the cell-scaffold interactions in vitro. Current study is aimed to investigate hDPSCs behavior including cell adhesion, attachment, and differentiation on four commercially available scaffolds from given groups.

Approximately 100 mg of given biomaterial scaffolds were placed into 96-well plates. hDPSCs were seeded onto the scaffolds at a cell density of 104 cells/well in osteogenic medium (Invitrogen, Grand Island, NY, United States). The cells - scaffold constructs were maintained at 37 °C in a humidified 5% CO2 atmosphere for 7 and 14 d.

hDPSCs adhesion on following scaffolds were assessed using scanning electron microscopy (SEM). Seven days after cell seeding, samples were fixed with 2.5% glutaraldehyde (MerckKGaA, Darmstadt, Germany) solution for 30 min. Specimens were then post-fixed with 1% Osmium tetroxide (Sigma-Aldrich, St. Louis, Missouri, United States). After cell fixation, the specimens were subsequently dehydrated by ascending grades of alcohol (25%, 50%, 75%, 96%, and 100% ethanol) for 15 min each step. The specimens were then allowed to dry in air. After complete drying, they were sputtered with gold and analyzed using a SEM imaging (Hitachi, Tokyo, Japan).

Osteogenic differentiation of hDPSCs on scaffold were evaluated at days 7 and 14 after cell seeding using alkaline phosphatase (ALP) activity assay. The cell-scaffold constructs were rinsed with PBS and homogenized in lysis buffer (pH 7.5, 10 mmol/L Tris-HCl, 1 mmol/L MgCl2, and 0.05% Triton X-100). The resulting mixture was then centrifuged at 12000 rpm for 10 min at 4 °C. The cell lysate was mixed with p nitrophenol phosphate substrate solution (Sigma aldrich, St. Louis, Missouri, United States) and alkaline buffer solution (Sigma aldrich, St. Louis, Missouri, United States). After incubation at 37 °C for 15 min, the above mixture was added to 0.5 N NaOH to stop the reaction and the absorbance at 405 nm was measured using ELIZA reader (BioTek, Winooski, VT, United States).

All quantitative data were expressed as mean ± SE. Analysis of variance and Post hoc tests was conducted for multiple comparisons. A P value less than 0.05 were considered to be significant. 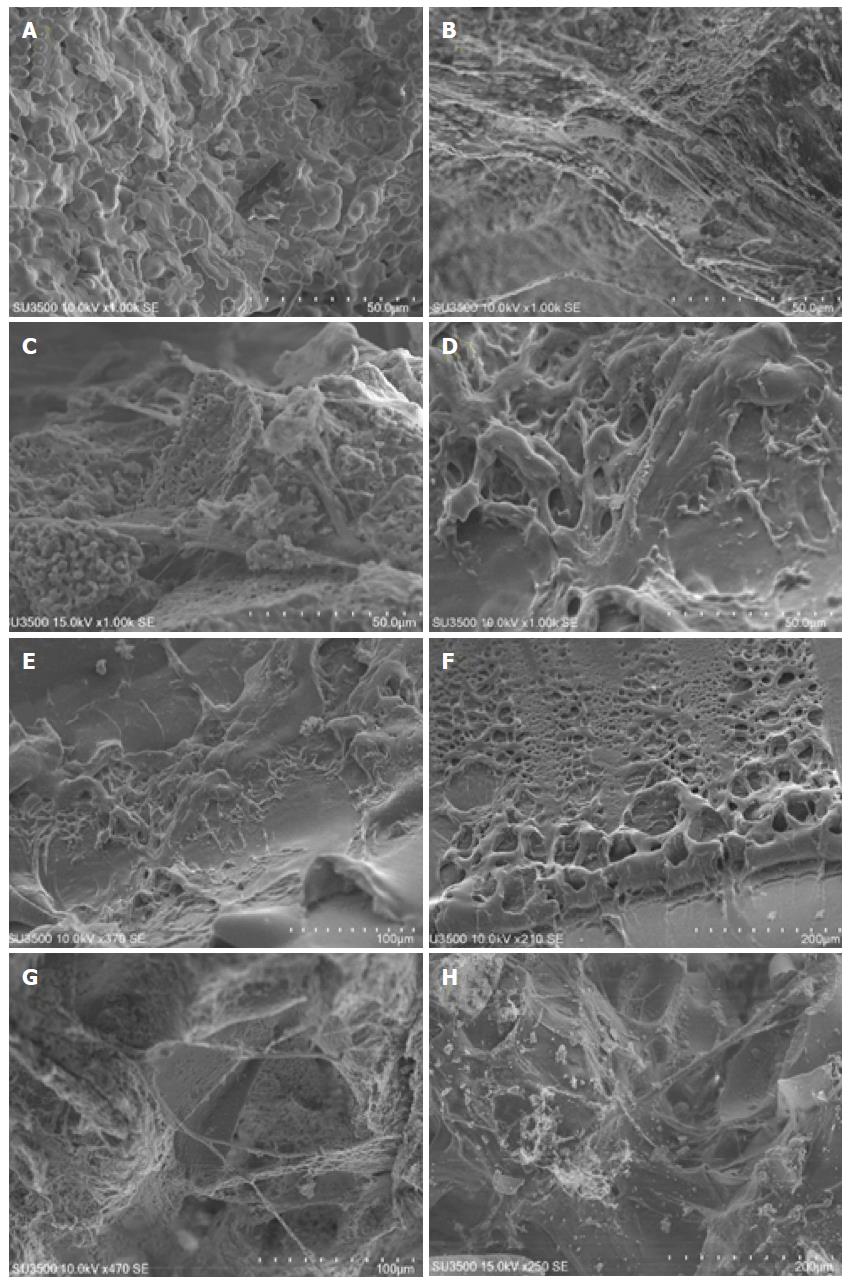 The proliferation of hDPSCs on different scaffold biomaterials were monitored and quantified after 7 and 14 d culturing of the cells by means of DNA counting assay (Figure 2). DNA counting assay confirmed the SEM results. The amount of DNA was highest on PLLA group at both time points (Figure 2A and B). 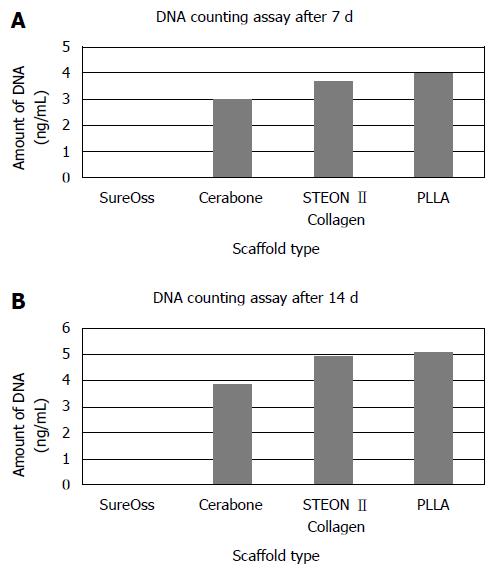 Figure 2 The quantitative analysis of human dental pulp stem cells proliferation by DNA counting assay after 7 (A) and 14 (B) d. Note that the highest amount of DNA was observed on PLLA group at both time points.
Evaluation of hDPSC differentiation

The osteogenic differentiation capability of hDPSCs on different scaffold biomaterials was compared using ALP activity assay. The results are presented in Figure 3A and B. At day 14 both cells cultured on PLLA (Synthetic) and OSTEON II Collagen (Composite) scaffolds showed high level of ALP activity compared to cells on Cerabone (Xenograft). No significant difference observed between osteogenic activity of hDPSCs on OSTEN II Collagen and PLLA group (Figure 3B). 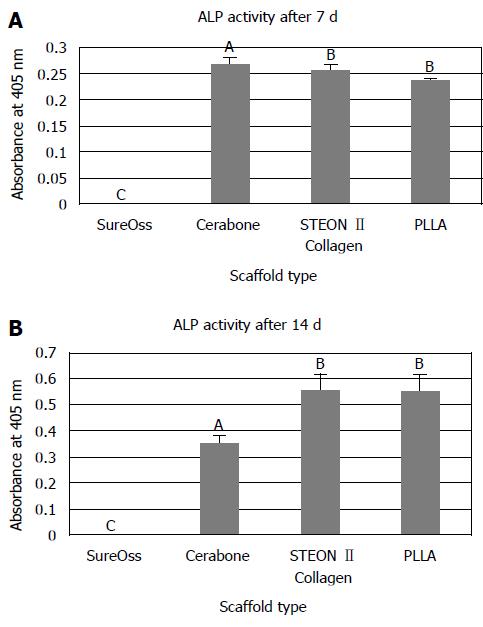 Figure 3 The assessment of osteogenic differentiation of human dental pulp stem cells by alkaline phosphatase activity assay after 7 (A) and 14 (B) d. ALP activity was highest on PLLA and OSTEON II Collagen groups at day 14. Note that no significant difference was observed between PLLA and OSTEON II Collagen. Also, note that different letters are indicated significant difference at P≤ 0.05. ALP: Alkaline phosphatase.
DISCUSSION

An ideal scaffold should interact with cells, support cell attachment and proliferation, and stimulate tissue regeneration. In current study, we investigated the hDPSC activity and growth behavior on four different 3D scaffold biomaterials. The scaffold biomaterials used in this study are already commercially available for clinical applications. However, comparing their efficiency to provide structural support for hDPSCs is essential. hDPSCs has been selected for our observation, since their clinical application seems feasible. Harvesting and isolating these progenitor population are relatively easy and a sufficient number of the cells can be provided in two weeks[14,15]. In addition, since dental pulp stem cells are derived from neural crest, different origin from mesoderm-derived bone marrow stem cells, they may considered better candidate for repair of damages in neural crest-derived tissues including periodontium and craniofacial defects[15,18].

We have shown that all scaffold biomaterials except SureOss (Allograft) support hDPSC adhesion, proliferation and differentiation. Among them, the highest cell proliferation was observed in the presence of PLLA, as it confirmed with both SEM and DNA counting assay. SEM showed almost all surface of PLLA scaffold was covered by adhering cells. PLLA is one of the few synthetic degradable polymers which approved by the Food and Drug Adminstration for clinical application[19] and has been used extensively in reconstructive surgery in combination with mesenchymal stem cells (MSCs)[20-22]. In our study, we have shown that MSCs derived from dental pulp tissues also are attached, proliferated, within PLLA scaffold.

In addition, SEM examination showed that cell morphology differs clearly between scaffolds. In the presence of Cerabone (Xenograft) and OSTEON II Collagen (Composite) scaffolds, the hDPSCs demonstrated the fibroblastic phenotype, which is the typical MSC morphology[23]. However, the cells on PLLA (Synthetic) scaffold showed the round-like shape which is the typical osteoblastic phenotype[24], indicating that PLLA scaffold not only can improve cell adhesion and growth, but also upregulate the osteoblastic phenotype.

Evaluating hDPSCs adhesion, proliferation and differentiation of HA/β-TCP in composition with collagen, we have shown that despite the increase in ALP activity, the cellular attachment and proliferation was lower compared to PLLA scaffold. Phosphate Ceramics including HA and β-TCP have been described as an osteoinductive materials for many years[25-27]. Despite their similarity to mineral component of human bone, their major drawbacks including their high resorption rate and low mechanical strength[28] hampers their applications in clinics. The combination of these materials and collagen has been reported in various studies to reinforce their mechanical strength and decrease resorption rate[29-31]. Moreover, several studies have been used both collagen and HA in combination with other scaffold biomaterial in order to mimic the natural environment of the bone[32]. Akkouch et al[32], showed increased osteogenic capability of hDPSCs cultured on composite scaffold made of HA, collagen and poly (L-lactide-co-έ-caprolactone) (PLCL). However, there have been controversies among the literature regarding the beneficial effects of these phosphate ceramics on cellular attachment and proliferation. Study of Pereira-Junior et al[33], showed the slow growth of MSCs in the presence of HA granule. Similar study on MSCs seeded on β-TCP has shown the slow bone formation in vivo[34]. In contrast, study of Kasten et al[35], showed that HA ceramics supported the cellular attachment and differentiation. Ling et al[36], compared the attachment, proliferation and osteogenic differentiation of DPSCs on composite scaffold containing HA, collagen and poly (L-lactide) (PLA) with β-TCP. They demonstrated that although DPSCs had more mineralization on β-TCP, cell attachment and proliferation were higher in composite scaffold of HA, collagen and PLA.

Present study was designed to evaluate these bone substitute materials in response to MSCs derived from dental pulp. However, the result of this study needs to be confirmed in vivo, where the interaction of cell-scaffold with host environment is an essential factor.

Our findings indicate that PLLA (Synthetic) scaffold supports adhesion, proliferation and osteogenic differentiation of hDPSCs. Therefore, it can be useful for the purpose of craniofacial tissue engineering.

The treatment of large non-healing craniofacial defects has been posed a challenge for reconstructive surgeries. The conventional treatment approach for treatment of craniofacial bone defects is usually associated with donor site morbidities and limited availability. The concept of harvesting adult stem cells (ASCs) in combination with appropriate three-dimensional (3D) scaffolds have been proposed as a promising alternative approach in reconstructive surgery. Human dental pulp stem cells (hDPSCs) can be easily isolated from dental medical wastes, extracted teeth, and expanded ex vivo. Their osteogenic capability makes them appropriate source of ASCs. Bone formation from hDPSCs is required a 3D structure provided by scaffolds which should provide an appropriate environment for cellular attachment, growth, and differentiation.

A wide range of scaffold biomaterials have been developed for variety of applications in tissue engineering. Scaffolds can be categorized as following groups: (1) Allograft; (2) Xenograft; (3) Synthetic; and (4) Composite biomaterials. In order to select a suitable scaffold for craniofacial engineering, it is necessary to evaluate the cell-scaffold interactions in vitro. Current study is aimed to investigate hDPSCs behavior including cell adhesion, attachment, and differentiation on four commercially available scaffolds from given groups.

DPSCs in combination with PLLA scaffold can be useful for the purpose of craniofacial tissue engineering.

A scaffold is an artificial designed biomaterial which mimics extra cellular matrix and it is support cellular attachment, proliferation and differentiation.

The study is well designed and results are clear and support the conclusions.