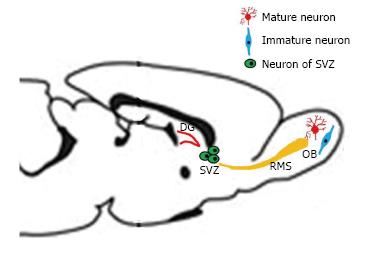 Figure 1 Different areas of neurogenesis in the adult rodent. The three areas of neurogenesis in the adult are the dentate gyrus of the hippocampus, the subventricular zone, and the olfactory bulb. Some progenitor cells are migrating from the SVZ to the OB, along a rostral migratory stream. DG: Dentate gyrus; SVZ: Subventricular zone; OB: Olfactory bulb; RMS: Rostral migratory stream. 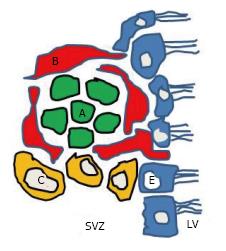 Figure 2 Four different types of progenitor cells in the subventricular zone. Type-A cells are migrating towards the olfactory bulb along the rostral migratory stream. Type B cells are believed to be the neural precursor cells and will give rise to both type C and type A cells. Type C cells are rapidly dividing immature precursor cells arranged in clusters along the migrating chains, and they are found only in the SVZ. E cells belong to ependymocytes lineage. LV: Lateral ventricle; SVZ: Subventricular zone. 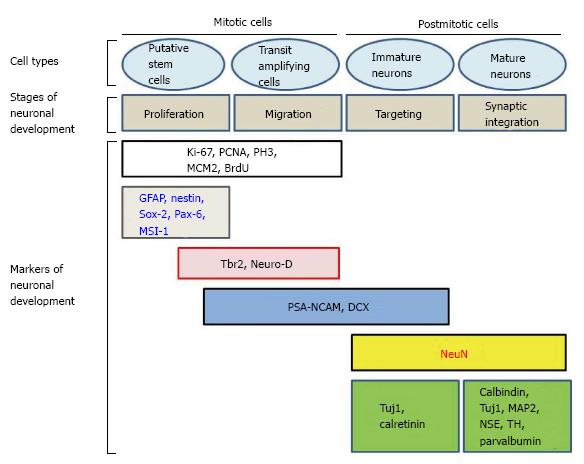 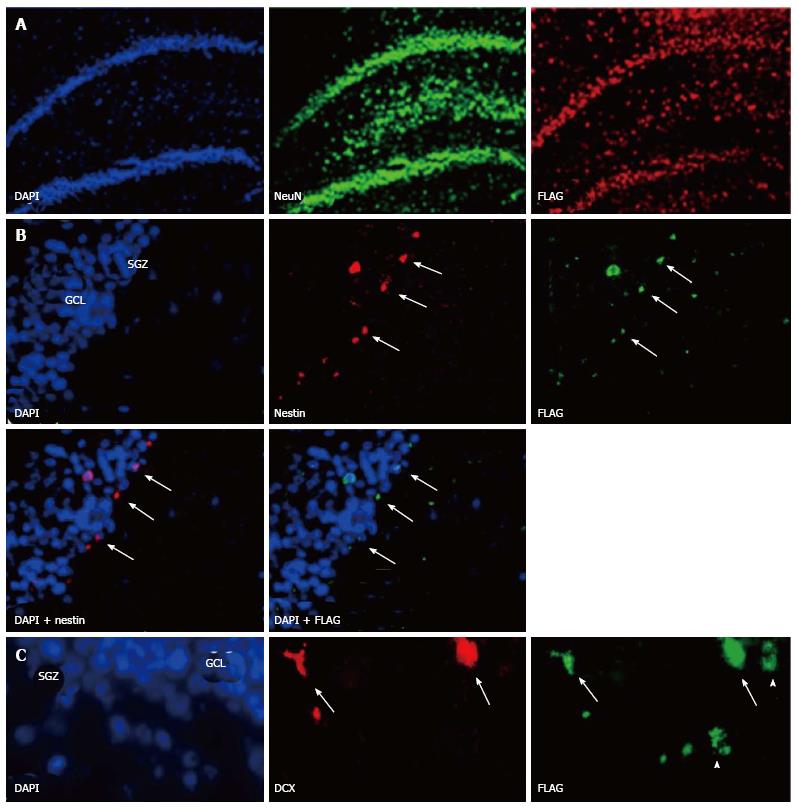 Figure 5 Transgene (AU1) expression in the hippocampus of rats whose bone marrow has been injected with SV (RevM10. AU1). A: Almost all DCX-positive cells were expressing AU1 (arrows); B: DCX+/AU1+ cells were of neuronal lineage, because they were stained by NT (arrows). No AU1 expression was seen after bone marrow injection of SV (BUGT), a control vector. DCX: Doublecortin; NT: Neurotrace. 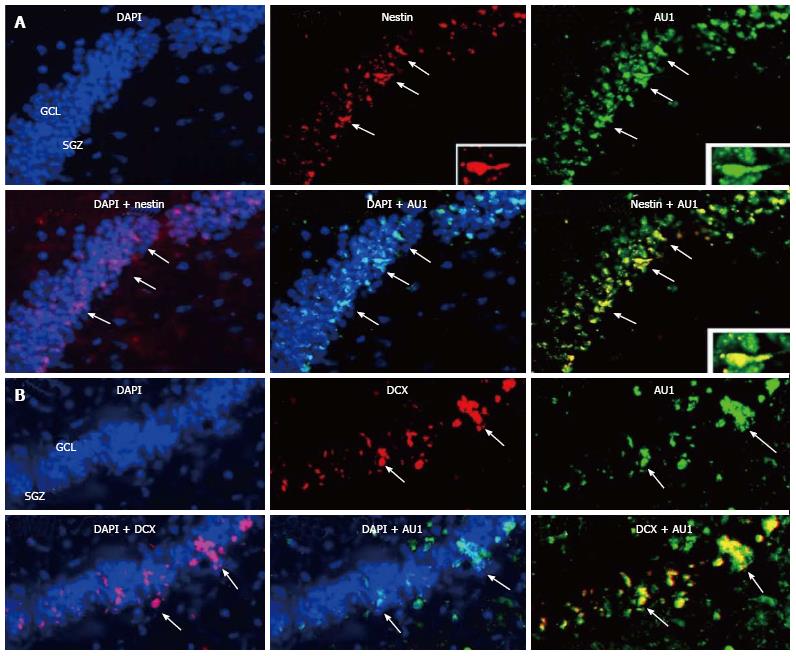 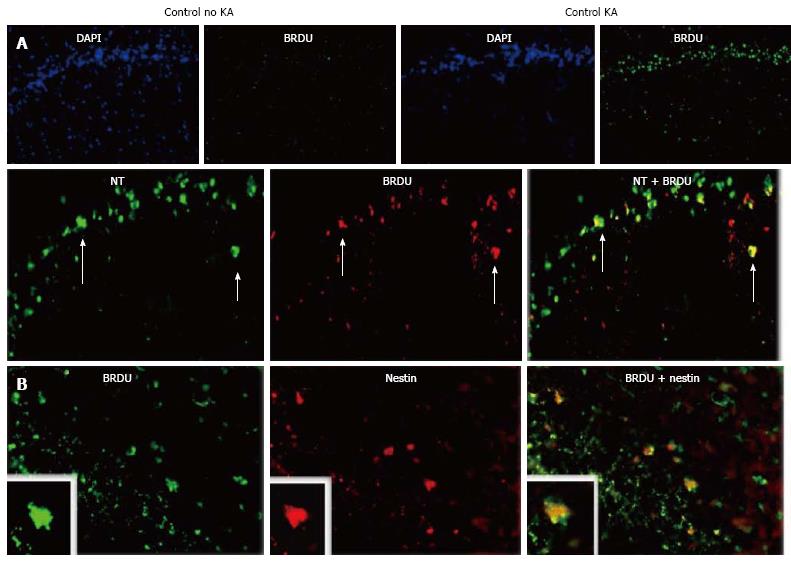 Figure 7 Kainic acid-induced regeneration in the hippocampus. Rats were injected with kainic acid (KA) intraperitoneally (i.p.), 10 mg/kg, and their hippocampi (HCs) analyzed by immunomicroscopy 7 d thereafter. A: Neurogenesis following KA treatment. Rats given KA or saline were injected with BrdU. Then, at 7 d post-KA, their DGs were immunostained for BrdU to visualize proliferating cells. DAPI counterstain is shown to facilitate interpretation. Arrows show neurons positive for BrDU. Double staining with Neurotrace (NT) for neurons is shown below; B: Double staining for nestin, a marker of proliferating and migrating neural cells (modified from Ref. [132]). 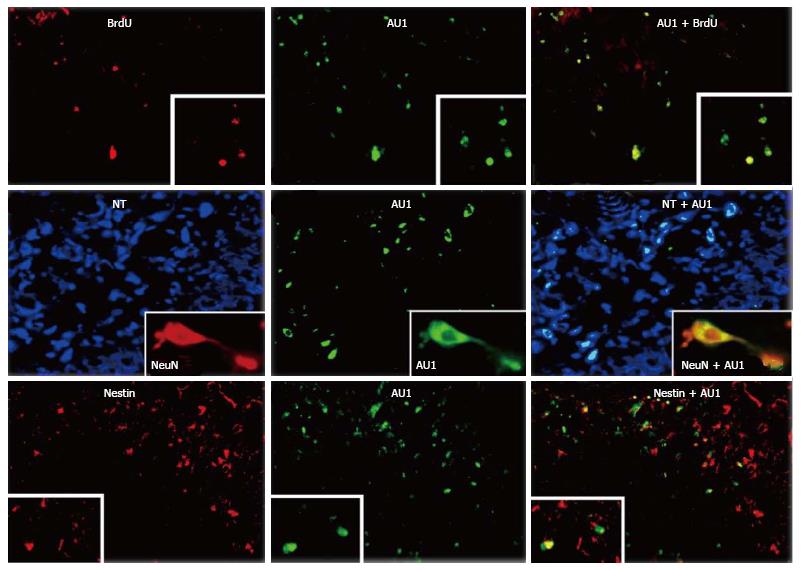 Figure 8 RNAiR5 gene delivery to the bone marrow increases numbers of bone marrow-derived cells in the hippocampus and neuroproliferative activity in the hippocampus, in the resting state and in response to kainic acid treatment. Bone marrow-derived cells in the hippocampus (HC) were all neurons, and most proliferating cells in the HC were bone marrow-derived. Double immunostaining for AU1 plus BrdU (upper row) and nestin (lower row), and neuron identification using Neurotrace (NT) and NeuN (middle row) was performed. Shown are HC sections from kainic acid-treated rats, transduced with SV (RNAiR5-RevM10.AU1). Most of the AU1+ cells were also positive for BrdU (79.8%, ± 6.9%) as a marker of cell proliferation, and most BrdU+ cells were also AU1+ (72.2%, ± 7.4%). Numerous AU1+ cells were also positive for nestin, a marker of proliferating and migrating neurons, although there were as well many nestin-positive cells that did not express AU1. The equivalence of NT identification of neurons and NeuN immunostaining of neurons is illustrated in the insets in the middle row. Data are representative of 3 independent experiments (modified from Ref. [132]). 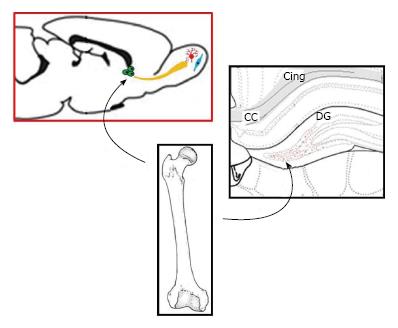