AIM: To study the effects of non-cytotoxic concentrations of docetaxel on some important angiogenic factors of LS174T Cells.

METHODS: The non-cytotoxic concentration of docetaxel and the activity of gelatinase were determined with MTT and gelatin zymography respectively, the expression of VEGF (vascular endothelial growth factor), bFGF (basic fibroblast growth factor), MMP (matrix metalloproteinase) 2 and MMP 9 was investigated with RT-PCR and Western blot.

RESULTS: The maximum non-cytotoxic concentration of docetaxel on LS174T Cells was 1.0 ng/mL. Compared with the solvent control group, 0.1, 0.5, 1.0 ng/mL of docetaxel could downregulate the expression of VEGF, bFGF, MMP 2 and MMP 9 and suppress the activity of gelatinase.

It has been demonstrated that angiogenesis is vital to the growth and metastasis of human cancers, thus it represents a potential therapeutic target and has become a new spotlight in tumor study fields[1-7]. Colorectal carcinoma is one of the most common malignant tumors, and the present therapeutic methods such as surgery, chemotherapy and other adjuvant methods have their own limits. Previous studies showed that the growth and metastasis of colorectal carcinoma depended intimately on angiogenesis as well[8-10], thus it is important to explore a potential way of inhibiting angiogenesis to increase its cure rate. Docetaxel, which is derived from Taxus baccata, is a cytoskeleton toxic chemotherapeutical agent. It can break the dynamic equilibrium of mitosis and cell division, hence it can induce apoptosis by preventing microtubule disassembly after binding to tubulin[11-13]. It has been proven to have positive effects on tumors such as non small cell lung cancer (NSCLC), breast cancer, ovarian cancer and some other refractory and metastatic cancerous diseases. Recently, docetaxel has been proven to hold antiangiogenic activity[14,15], but whether its antiangiogenic properties are linked to its cytotoxic role or not remains unclear, and we know little about its mechanism as yet. In this communication, our aim was to explore the effects of non-cytotoxic concentrations of docetaxel on VEGF, bFGF, MMP’s expression of LS174T Cells in vitro.

MATERIALS AND METHODS
Judgment of non-cytotoxic concentration of docetaxel

Docetaxel (Rhone-Poulenc Rorer, France) was disolved in solvent vehicle (13% ethanol), then diluted to working concentrations of 0.1, 0.01 µg/mL with sterilized normal saline (NS). LS174T Cells (Shanghai Institute of Cell Biology, Chinese Academy of Sciences) were cultured in RPMI 1640 (Gibco BRL) supplemented with 10% fetal bovine serum. The cultured cells were seeded on a 96-well plate with 5000 cells in each well. 72 h later, at 80% confluency, the culture medium was changed to the RPMI 1640 containing 1% bovine serum, docetaxel solvent various concentration of docetaxel were added. The experiments were divided into docetaxel solvent control group and docetaxel 0.1, 0.2, 0.5, 1.0, 2.0, 5.0, 10.0 ng/mL groups. 24 h later, 15 μL MTT [3-(4,5-dimethylthiazol-2-yl)-2,5-dipheny-ltetrazolium bromide] was added into each well, and the cells were incubated for another 4 h, then the fluid was cast, 150 μL DMSO was added. After vibrated for 10 min, the 490 nm absorpance value was determined with microplate reader apparatus (Labsystem Wellscan-MK-3, Finland). The ratio value of each group and the blank control group was taken as the relative MTT A value. Finally, we determined the maximum non-cytotoxic concentration of docetaxel on LS174T Cells and the trypan blue staining results.

The cultured LS174T Cells at 80% confluency were treated with docetaxel solvent and various concentrations of docetaxel. The cells were classified into docetaxel solvent control group and docetaxel 0.1, 0.5, 1.0 ng/mL group. 24 h later, we collected the supernatant of the cells, and concentrated it with Amicon filters to 10% of initial volume. Each sample was guaranteed to contain the same amount of total protein, gelatin zymography was performed in 10% polyacrylamide in the presence of 0.1% gelatin as described previously[16-18]. Identification of transparent bands at 92000 and 72000 dalton on the Coomassie blue background of the slab gel was considered positive for the presence of enzymatic activity. The collagenase activity was semi-quantified with densitometry of Image Quant software program.

The cell culture, drug treatment and groups classified methods were the same as the gelatin zymography experiment. All samples containing 10 µg total proteins were loaded into 7.5% polyacrylamide-SDS gel, electrophoresed for 3 h (apparatus of Amersham Pharmacia Biotech), and transferred onto the nitrocellulose membrane. The membrane was subjected to immunoblotting with anti-mouse monoclonal antibody MMP 2 and MMP 9 or anti-rabbit polyclonal antibody VEGF and bFGF (Oncogene corp), then conjuncted with the second antibody anti-mouse IgG-HRP or anti-rabbit IgG-HRP (Santa Cruz Biotechnology, California). Immunodetections were carried out using Western blot chemiluminescence reagent (Santa Cruz Biotechnology, California). The target bands of the gel were semi-quantified by using densitometry of image Quant software program. The ratio value of each group and the blank control group was taken as the relative value.

Data were expressed as mean ± SD. Significant differences were determined by using ANOVA in statistical software SPSS10.0. The level of significance was P < 0.05.

Gelatin zymography result revealed prominent 92000 and 72000 dalton bands (Figure 1), there was expression of MMP2 and MMP9 in the LS174T cells culture supernatant. The semi-analysis results showed that 0.1, 0.2, 0.5, 1.0 ng/mL docetaxel could downregulate two matrix metalloproteases, the activity of MMP9 was higher than that of MMP2, there were significant differences between these groups. 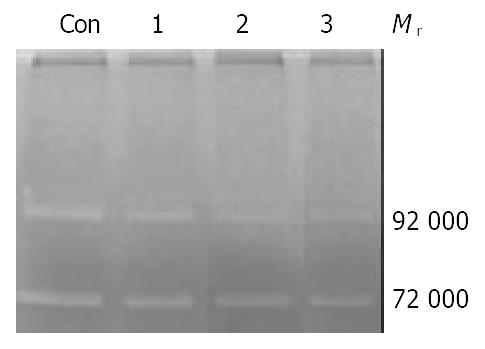 The X-ray film was scanned (Figure 2), the semi-analysis results showed the amount of VEGF, bFGF, MMP2 and MMP9 decreased as the concentration of docetaxel increased, there were significant differences between these groups. The level of VEGF, MMP9 was higher than that of bFGF, MMP2. 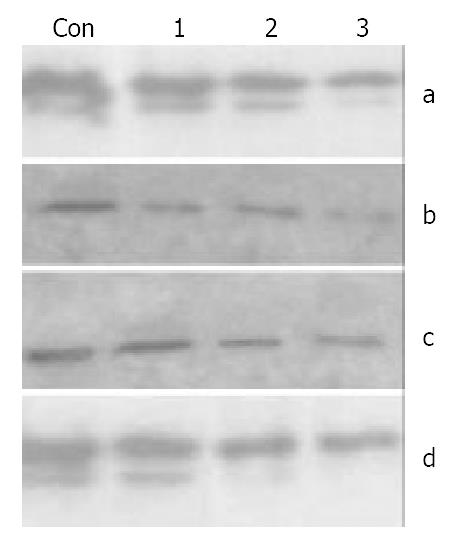 Agrose gel was scanned, the semi-analysis results showed the content of VEGF, MMP9 was higher than that of bFGF, MMP2, the content of bFGF was the lowest (Figure 3). The expression of VEGF, bFGF, MMP2 and MMP9 was inhibited by various concentration of docetaxel in a dose-dependent manner, and there were significant differences between these groups. However, steady state expression of GAPDH (as internal control) was observerd in all cases. 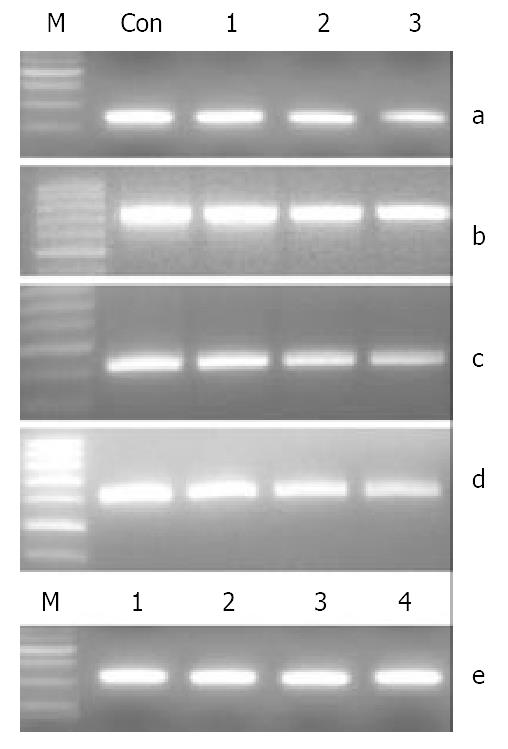 It has been demonstrated that the antitumor action of taxanes contributes to their antiangiogenic activity. Taxanes were found to inhibit angiogenesis by suppressing the proliferation, migration, and capillary formation of endothelial cells both in in vitro and in vivo models, it could inhibit the endothelial cells (HUVEC) migration with an IC50 of 0.01 nM[9,19-21]. However, little is known about the effects of docetaxel on angiogenesis related factors till now. Because of docetaxel’s cytotoxic characteristic, it is important to verdict its non-cytotoxic concentration. Combined with MTT experiment and the trypan blue staining, our results indicated that 1.0 ng/mL was the maximum non-cytotoxic concentration of docetaxel in LS174T Cells.

LS174T Cells line, as a moderately differentiated adenocarcinoma with a moderately invasive ability, is one of very common colorectal carcinomas. Its characteristic is similar to that of most common carcinomas, so the present study holds definite clinical significance. And our study showed there was expression of VEGF, bFGF, MMP2 and MMP9 factors in the LS174T Cells at the gene and protein levels[22-26], which suggests angiogenesis may play a very important role in LS174T cells related tumors.

According to our current work, non-cytotoxic concentration of docetaxel could downregulate the expression of VEGF, bFGF in LS174T Cells, which are the triggers of angiogenesis. VEGF stimulates the degradation of ECM as well as the proliferation, migration and capillary formation of endothelial cells[23,27-31], while bFGF has growth-stimulating and invasion-promoting effects on the angiogenesis process[32,33]. From the facts mentioned above, we suppose that the drug has a strong antiangiogenic action whose mechanism might be mainly related to the supressing effect on neoangiogenesis from the very beginning. Our results indicated that non-cytotoxic concentrations of docetaxel also could supress the expression of MMP2 and MMP9 and reduce their activities. MMP2 and MMP9 play a vital role in the turnover of basement membrane collagen type IV and type I which exert a crucial effect on the formation of new capillary sprouts and neoangiogenesis[15,34-36]. Baseing on the above facts, we speculate that the drug can prevent degradation of the vascular basement membrane, thus further inhibit neoangiogenesis.

We also found the inhibitory effects of docetaxel on VEGF and MMP9 are stronger than those on bFGF, MMP2. We suppose it owes to docetaxel’s relative selectivity, or the higher level of VEGF and MMP9. In addition, there are complex correlating regulations among these four factors. And the direct and indirect effects of docetaxel cannot be distinguished clearly as yet, which well deserves further investigation.

Whether docetaxel’s antiangiogenic property is linked to its cytotoxic role or not needs further elucidation. Schimming et al[37] determined whether inhibition of neoangiogenesis played a role in docetaxel’s antitumor efficacy. Since no reduction in blood vessels occurred in tumors unresponsive to docetaxel, they thought the inhibition of neoangiogenesis in docetaxel responsive tumors was likely to be the result of a decrease in angiogenic stimuli due to docetaxel’s cytotoxic action. Vacca et al[38] reported that both cytotoxic and non-cytotoxic doses of docetaxel displayed a dose-dependent antiangiogenic activity in the mouse embryo fibroblasts, human Kaposi’s sarcoma, breast, endometrial carcinoma and lymphoid tumor in vitro and in vivo. Our results are in coincidence with theirs.