AIM: To investigate the early protective effect of ischemic preconditioning on small intestinal graft in rats.

Small bowel transplantation (SBT) has been advocated as the preferred therapy for patients with irreversible intestinal failures such as short bowel syndrome[1-6]. In recent years, although potent immunosuppressive agents have been used, rejection rate of small intestinal grafts still amounts to 50%[7]. Primary graft rejection and reperfusion damage involved in loss of small intestine function after transplantation are still the major obstacle to SBT[8-10]. Postischemic reperfusion damage, a nonspecific injury, may enhance graft immunogenicity and is likely to play an important role in the development of early specific and late rejection-related events, and threatens graft function and graft survival[11]. Therefore, it has important clinical significance for SBT if reperfusion injury of the graft could be ameliorated or prevented.

Studies have indicated that ischemic preconditioning can alleviate reperfusion injury of tissues or organs. Ischemic preconditioning (IPC) refers to a phenomenon in which a tissue is rendered resistant to the deleterious effects of prolonged ischemia and reperfusion by prior exposure to brief periods of vascular occlusion[12]. With regard to organ transplantation, the beneficial effect of IPC has been previously described in transplantation procedures involving in ameliorating heart preservation injury and liver reperfusion damage[13,14], but its protective capacity against reperfusion injury in small bowel transplantation has not completely defined. Lately, Sola et al[15]. have shown that the release of lactate dehydrogenase (marker of cell injury) decreases markedly during small intestinal graft preservation and reperfusion, and morphological change of graft improves greatly, after IPC was carried out. Extracelluar matrix is the early target of reperfusion injury[16]. Epithelial cell apoptosis of small intestinal graft is the major mode of cell death[17]. But no study has covered the effect of IPC on them. So this study was to investigate the protective effect of ischemic preconditioning on epithelial cells and extracelluar matrix of intestinal graft in rats.

SD rats were used as donors and recipients. They were randomly divided into the following groups: (1) sham operation group (S group, n = 6), in which animals were only subjected to anesthesia and laparotomy; (2) heterotopic segmental small bowel transplantation group (SBT group, n = 12), in which the donor and recipient were paired according to the similar body weight; (3) IPC plus SBT group (ISBT group, n = 12). IPC was carried out before the graft was harvested. Namely, the superior mesenteric artery was occluded for 10 min with a microsurgical atraumatic vascular clamp, then it was released, and the graft was reperfused for 10 min. The following surgical procedures were the same as SBT group.

Heterotopic SBT was performed with a technique modified from that described by Monchik and others scholars[18-21]. All animals were fasted for 12 h, but had free access to water before operation. They were anesthetized with pentobarbital sodium solution (2%, 35 mg/kg) intraperitoneally. After perfused in situ with cold lactated Ring’s solution, the small intestine 5 cm distal to the Treitz ligament was harvested from donor rat with a vascular pedicle including portal vein (PV) and aorta segment with superior mesenteric artery, and stored at 4 °C in lactated Ringer’s solution for 1 h. After left nephrectomy, left renal vein and abdominal aorta of the recipient were isolated. The graft was revascularized by end-to-side anastomosis between donor aorta and recipient aorta using continuous 9-0 non-traumatic nylon suture and end-to-end anastomosis between donor PV and the left renal vein of the recipient using a cuff technique. The recipient’s own intestine was left intact. During transplantation, mean warm ischemia time of graft was 25-30 min, and the longest did not exceed 40 min[22].

When the graft was revascularized successfully and reperfused for 1 h, samples were obtained from the different groups. Specimens were fixed in 4% paraformaldehyde, embeded in paraffin, sliced 4 μm thick, and stained by the SP methods. A polyclonal antirat laminin antibody (Boster Biotech, Wuhan, China) was used at concentration of 1:100. DAB was used for visualization. For negative control, the slides were treated with PBS instead of primary antibody.

Apoptosis was detected on sections from paraformaldehyde-fixed and paraffin-embedded blocks by the terminal deoxynucleotidyl-transferase (TdTase) mediated d-UTP-biotin nick end labeling (TUNEL) method[23]. Apoptosis assay with a detection kit from Bochinger Mannheim Germany, conformed to the manufacturer’s protocol strictly. The nuclei of apoptotic cells were stained brown as detected under light microscope, and apoptotic cells were quantified by calculating the apoptotic index (apoptotic cells/10 high-power fields)[24]. Negative control was designed by PBS instead of TdTase.

For transmission electron microscopy, intestinal fragments of approximately 2 mm3 obtained from different groups, were fixed in 2.5% glutaraldehyde for 3 h, rinsed in PBS, then postfixed in 1% osmium tetroxide for 2 h. Samples were dehydrated in graded alcohols, and embedded in Epon 812, cut on an ultramicrotome and stained with uranyl acetate and lead citrate. Ultrathin sections were viewed using transmission electron microscopy (Hitachi H-600).

Data were expressed as mean ± standard error of the mean. One-way analysis of variance (ANOVA) was used for multiple comparisons with Student Newman Keylls (SNK) test. Significant difference was assumed when P < 0.05.

As seen from Table 1, the mean optical density value of laminin positive products in SBT group was sharply lower than that in S group (P < 0.05). However, after IPC was carried out, the mean optical density value of positive products in ISBT group was higher, compared with that in SBT group (P < 0.05). It indicated that IPC had a protective effect on the basement membrane, one of the components of extracelluar matrix.

As shown in Figure 1 and Table 2 in S group, apoptotic epithelial cells at villus tip were found only occasionally. However, after the graft underwent 60 min of cold ischemia and 60 min of warm reperfusion, many apoptotic cells appeared at villus tip of the graft in SBT group, The AI in SBT groups was significantly higher than that in S group (P < 0.05), but the number of apoptotic cells at villus tip of the graft decreased sharply after transient IPC was carried out. The AI in ISBT group was sharply lower than that in SBT group (P < 0.05). It showed that the mechanism of IPC was also involved in inhibition of epithelial cell apoptosis induced by ischemia and reperfusion in small intestinal graft. 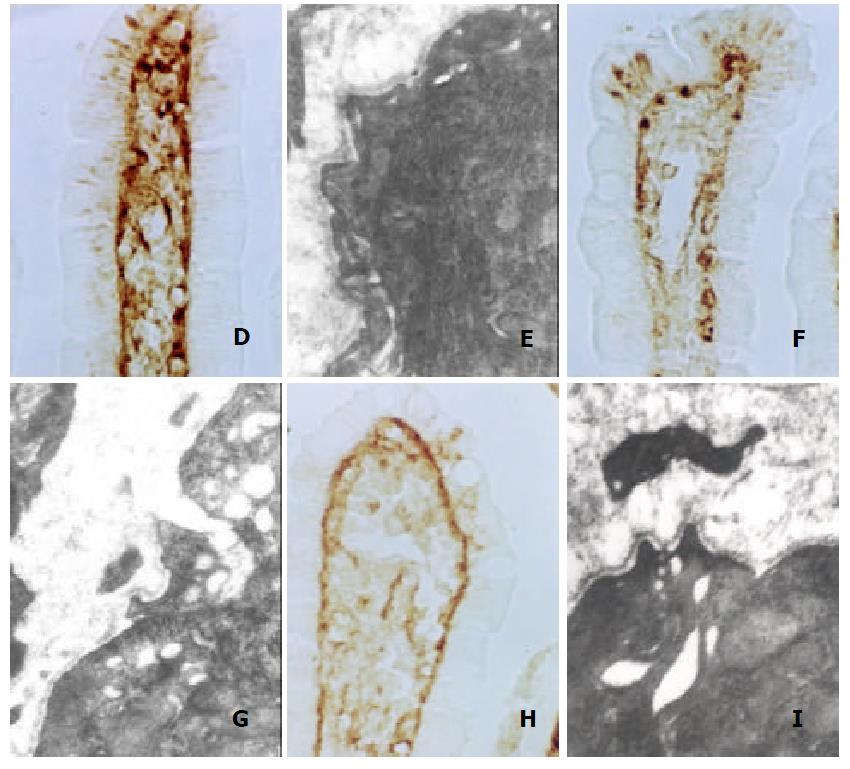 Figure 2 Light and electron micrographs (LM and EM) of morphological change of epithelial basement membrane (BM) (LM, original magnification ×400, EM, original magnification ×20000). D and E: In S group, BM showed line-shaped, continuous normal structure. F and G: In SBT group, BM became disrupted and collapsed, even disappeared. H and I: In ISBT group, after IPC was function carried out, the lesion of BM was slighter, compared with that in SBT group.
DISCUSSION

Available evidences indicate that the small intestinal mucosa is susceptible to postischemic reperfusion, 15 minutes of ischemia alone could induce detectable mucosal injury, and reperfusion exacerbates the mucosal injury[25]. Under physiological conditions, the gut shows a remarkable rate of turnover, and a rapid regeneration of the epithelial layer has also been reported after intestinal hypoxia/reperfusion. Taguchi et al[26] have found that 15 minutes of ischemia and 1 h reperfusion could result in increase of the expression of proliferation cell nuclear antigen (PCNA) in small intestine. PCNA, a kind of nuclear protein that produces or expresses in proliferative cells, is a significant cell-regulated nuclear protein for DNA-polymerase δ. So PCNA is a marker for proliferative cells[27-29]. The increase of small intestinal PCNA expression after 1 h reperfusion indicates that the repair process of epithelia is initiated by ischemia and reperfusion. In order to discover the deleterious effect of reperfusion and protective effect of IPC, respectively, on epithelia and extracelluar matrix of the small intestinal graft, and to prevent influence on graft due to the recovery of epithelia during reperfusion, the present study was designed to obtain specimens from different groups 1 h after reperfusion when the vascular anastomosis had finished.

The protective effect of IPC was first described in heart[30], and many comprehensive studies on IPC indicated that it could be divided into two major classes. One is the early phase of protection that appears 1-3 h after IPC, and the other is the late phase of protection that appears 24 h after IPC (the second window of protection). Lately, this protective effect has been also demonstrated in the small intestine[31]. Although the effects of IPC on small intestine are not completely understood, several studies suggested that they were involved in transient increase of nitric oxide synthesis, activation of KATP channel, release of calcitonin gene-related peptide and endogenous opioid peptides, and inhibition of P-selectin expression in small intestine[32-36]. Apoptosis regulates many physiological and pathological processes. The influence of IPC on cell apoptosis in small bowel graft is not well known. Apoptosis is a major mode of epithelial death and peaks at 60 min during reperfusion period, in comparison, necrosis was relatively minor[37,38]. Therefore, loss of intestinal epithelia is a consequence of apoptosis during reperfusion. In the present experiment, apoptotic epithelial cells at villus tip were found accidentally in S group. Under physiological circumstances, apoptosis was reported to be an important mechanism of epithelial cell renewal. However, in SBT group after the graft underwent 60 min of cold ischemia and 60 min of warm reperfusion, many apoptotic cells appeared at villus tip of the graft. Compared with S group, the number of apoptotic cells was significantly higher. It indicated that apoptosis was initiated by ischemia and reperfusion in the graft. But in ISBT group, after transient IPC was carried out, the number of apoptotic cells at villus tip of the graft decreased sharply, in comparison with that in SBT group. It suggests that the mechanism of IPC may also involve the inhibition of epithelial cell apoptosis induced by ischemia and reperfusion in small intestinal graft.

In summary, the present study demonstrates that ischemic preconditioning has an early protective effect on epithelial cells and extracelluar matrix of small intestinal graft. Inhibition of epithelial cell apoptosis initiated by reperfusion may be one of the mechanisms of IPC. With regard to organ transplantation, IPC may have a substantial impact on clinical practice. Alleviation of reperfusion injury of graft by IPC can enhance the function grafts and prolong their survival.