AIM: To investigate whether emodin has any effects on circular smooth muscle cells of rat colon and to examine the mechanism underlying its effect.

Emodin (1, 3, 8-trihydroxy-6-methylanthraquinone) is an anthraquinone derivative isolated from Rheum palmatum[1]. Pharmaceutical preparations based on Rheum palmatum have been widely used in China for hundreds of years to treat gastrointestinal disorders[2-4]. The reported biological effects of emodin include antitumor, antibacterial and anti-inflammatory actions[5-7]. Emodin also possesses prokinetic effect on gastrointestinal smooth muscle. Stimulatory actions of emodin on gastrointestinal smooth muscle have been described in several studies, and emodin-induced contractions have been related to calcium ions[8-10]. However, the effects of emodin on the contractility of smooth muscle cells have not yet been explored. Thus, the present study was designed to determine whether emodin had any effects on circular smooth muscle cells of rat colon and to examine the mechanism underlying its effects.

Preparation of dispersed smooth muscle cells Smooth muscle cells were isolated from the circular muscle layer of Wistar rat colon as previously described with slight modifications[11]. Briefly, muscle strips were digested for 30 min at 31 °C in HEPES medium containing 0.1% type II collagenase and 0.01% trypsin inhibitor. The partly digested strips were washed with PBS, and muscle cells were allowed to disperse spontaneously for 30 min. The cells were harvested by filtration through 500 μm Nitex filter and centrifuged at 350 g for 10 min, and the filtrate (cell suspension) was equilibrated for 20 min before the experiment. For some experiments, cells were permeabilized with a brief exposure to saponin (75 μg/ml for 4 min) and equilibrated in a cytosolic buffer.

Measurement of muscle cell contraction Contraction was measured in smooth muscle cells by computerized image micrometry as described previously[12]. An aliquot consisting of 1 × 104 cells in 0.25 ml of medium was added to 0.1 ml of a solution containing the test agents. The reaction was interrupted at 1 min by adding 0.1 ml of acrolein at a final concentration of 0.1%. Individual cell length was measured by computerized image micrometry. The average length of cells in the control state or after adding test agents was obtained from 50 cells randomly. The contractile response was defined as the decrease in the average length of the 50 cells and expressed in percentage as compared with control length.

Freshly dissociated smooth muscle cells were seeded onto glass coverslips and incubated with Fluo-3 working solution (Fluo-3 AM 5 μmol and Pluronic F-127 0.03% dissolved in standard buffer) at 37 °C under an atmosphere of 5% CO2. After a loading period of 30 min, the cells were washed with PBS to remove extracellular Fluo-3 AM and incubated for an additional 20 min to allow complete desterilization of the cytosolic Fluo-3 AM.

Coverslips mounted on the chamber slide (Molecular Probe) were placed on the stage of the microscope. The fluorescence in the cell was excited at 488 nm by an argon-ion laser, emission at wavelength between 515-545 nm was detected by a photomultiplier. Changes in the Fluo-3 fluorescence intensity indicating fluctuations in cytosolic Ca2+ were recorded using T-series acquisition. After stable baseline fluorescence intensity was measured, 10 μl of an agent was added to extracellular medium to yield a 1/100 concentration, and the fluorescence intensity was recorded. The ratio representing the intracellular calcium variations related to the basal level was calculated. Baseline and sustained phases of agonist induced [Ca2+]i were determined from the average of 5 data points. Peak [Ca2+]i was determined from the average of 3 data points including the absolute maximum of the response.

Data represented means ± standard error of the mean. Values of n were the numbers of cells. Student’s t-test was performed and a P-value of less than 0.05 was considered statistically significant.

In resting state, the average length of isolated smooth muscle cells was 81.27 ± 6.29 μm. The application of emodin to freshly isolated smooth muscle cells induced a reduction in cell length. This reduction in cell length reflected contraction of the smooth muscle cells. Emodin at concentrations of 5 to 100 μmol/L induced a concentration-dependent contraction (Figure 1). Maximal contraction of 17.26% ± 3.51% was observed with 50 μmol/L of emodin. In order to determine the signal mechanism underlying emodin-induced contraction, the effect of ML-7, an inhibitor of MLCK, on the cell contraction induced by emodin was examined. 36.61% ± 4.69% of the contractile response induced by 50 μmol/L emodin was inhibited by preincubation of the cells with ML-7(Figure 2). 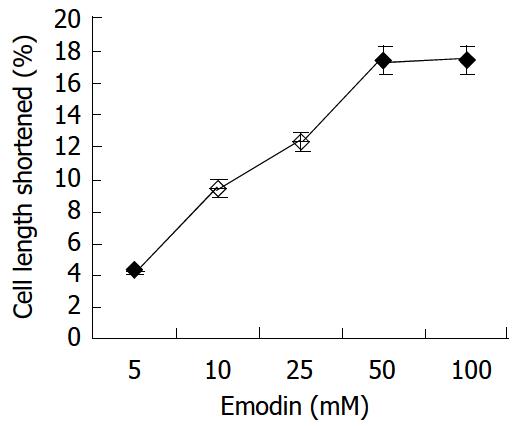 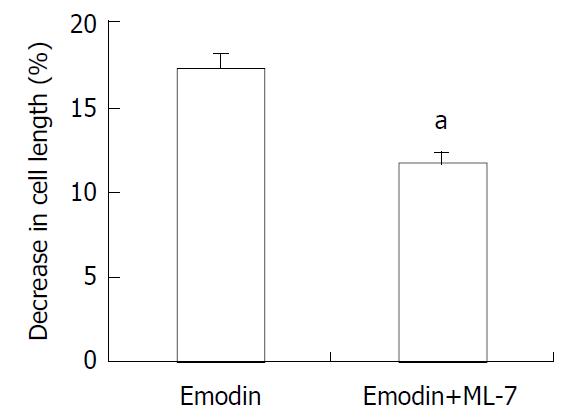 The exposure of freshly isolated smooth muscle cells to emodin (50 μmol/L) induced an increase in [Ca2+]i. The emodin-induced increase in [Ca2+]i was a biphasic rise, consisting of a transient peak followed by a decline to steady-state level that remained significantly above baseline during scanning (Figure 3 and Figure 4). 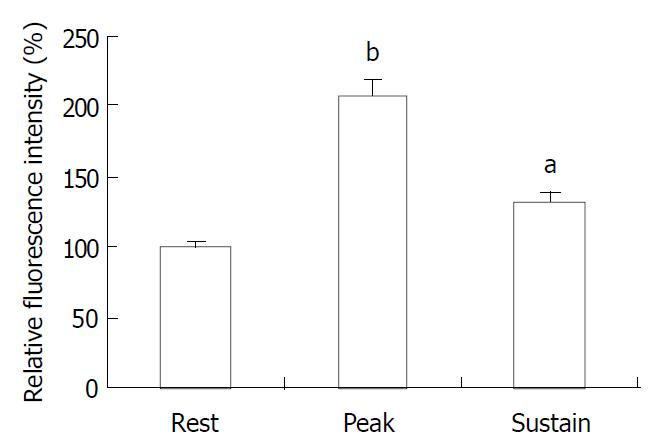 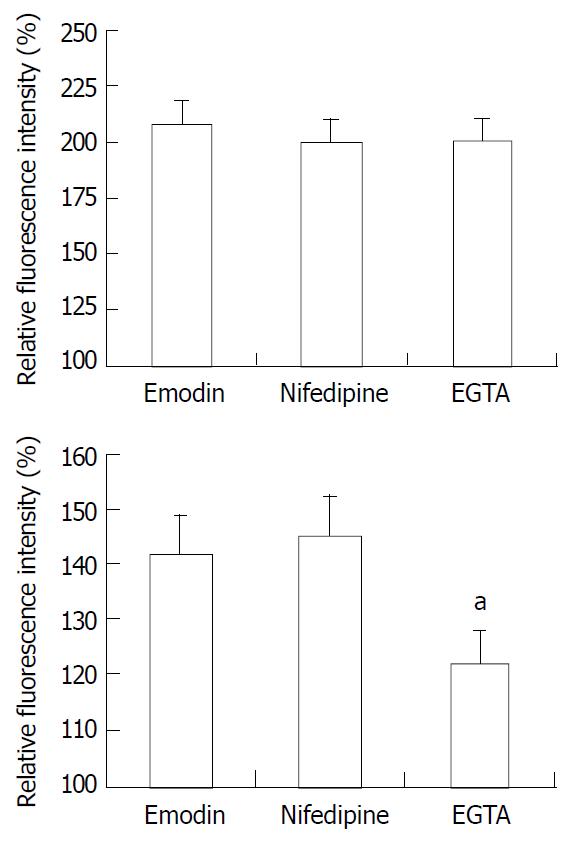 Figure 5 Average peak (top) and sustained (bottom) changes in [Ca2+]i in response to emodin under control conditions, in the presence of nifedipine, and EGTA solution. n = 15. aP < 0.05 vs emodin group.

Because emodin-induced peak increase in [Ca2+]i was not affected by pretreatment with EGTA and nifedipine, the contribution of calcium release from the intracellular stores to the changes in [Ca2+]i in response to emodin was examined. Smooth muscle cells were pretreated for 10 min with ryanodine (10-5M) to inhibit Ca2+ release from ryanodine-sensitive intracellular stores. Ryanodine markedly attenuated the peak increase in [Ca2+]i in response to emodin (Figure 6, P < 0.05). In order to examine the role of IP3 in emodin-induced increases in [Ca2+]i, the effect of low molecular weight heparin, a specific IP3 receptor antagonist was tested. Heparin did not diffuse across the plasma membrane, therefore, it was used in permeablized smooth muscle cells. In permeablized smooth muscle cells, the peak rise in [Ca2+]i induced by emodin was almost abolished by incubation with 10 μg/ml heparin (Figure 6). 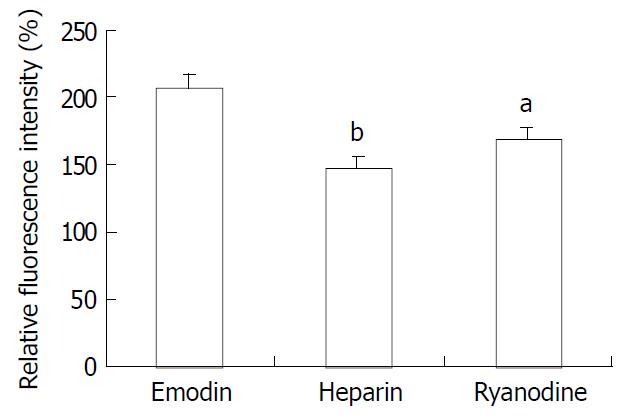 The result of this study showed that emodin had a direct contractile effect on smooth muscle cells freshly isolated from rat colon, as application of emodin resulted in a decrease in cell length. It was also found that exposure of smooth muscle cells to emodin induced an increase in [Ca2+]i, and the rising in [Ca2+]i induced by emodin was a biphasic rise in [Ca2+]i consisting of a rapid, transient peak followed by a decline to sustained level that remained elevated than baseline. The involvement of calcium in emodin-induced contraction was in agreement with previous studies[9,10], reporting that emodin-induced contractions were related to calcium ion.

Because pretreatment with EGTA and nifedipine had no effect on emodin-induced peak increase in [Ca2+]i, it seemed likely that the portion of peak emodin-induced Ca2+ transient mainly depended on the calcium release from intracellular stores. The sarcoplasmic reticulum (SR) is the physiological intracellular source and sink of activator Ca2+ in smooth muscle cells[15,24]. The SR of smooth muscle is endowed with two different types of Ca2+ release channels, i.e. inositol 1, 4, 5-triphosphate receptors (IP3Rs) and ryanodine receptors (RyRs)[14,15,24-26]. Pretreating cells with ryanodine, a RyRs antagonist, attenuated but did not abolish the peak in [Ca2+]i. In contrast, heparin, which inhibits the IP3 binding to its receptor, almost abolished the peak component of the Ca2+ transient. These observations suggest that the residual Ca2+ peak observed in the presence of ryanodine is due to release of Ca2+ from IP3-sensitive stores, and Ca2+ release through RyR receptors is possibly linked with the Ca2+-induced Ca2+-release (CICR). CICR means a process that a rise in [Ca2+]i resulted from extracellular Ca2+ influx or Ca2+ release from IP3-sensitive store triggers further calcium release from RYR in the SR[14,26-29]. Ryanodine receptors contain Ca2+ binding sites, allowing increased [Ca2+]i to initiate release from intracellular calcium stores[30,31]. CICR has been demonstrated to occur in a number of studies. On the basis of our findings, it appears to be operative in emodin-induced increase of [Ca2+]i in rat colonic smooth muscle cells.

Taken together, the results of this study indicate that emodin has a direct excitatory effect on circular smooth muscle cells from rat colon and its effect is mediated via Ca2+/CaM-dependent MLCK signal pathway. The data suggest that the emodin-induced peak increases in [Ca2+]i primarily depend on Ca2+ release from IP3 sensitive stores, which trigger Ca2+ release from ryanodine-sensitive stores through CICR mechanism. Additionally, Ca2+ influx from extracellular medium contributes to the sustained increase in [Ca2+]i observed in response to emodin.