RESULTS: Recombinant retroviral expression vector (pLCSN) was positively detected by PCR as well as enzyme digestion with EcoRI and BamH I. Retroviruses were generated by pLCSN transfection packing cell and the virus titer was 3 × 105 CFU/ml. Indirect immunofluorescence and FACS showed that HBV core gene was expressed in murine fibroblasts. Transduced bone marrow cells had capability of differentiating into DCs in vitro in the presence of rmGM-CSF and rmIL-4. The result of PCR showed that HBV core gene was integrated into the genome of transduced DCs. Western blot analysis showed that HBV core gene was expressed in DCs. The transduction rate was 28% determined by FACS. Retroviral transduction had no influence on DCs expressions of CD80 and MHC class II. HBcAg specific CTLs and Th1 type immune responses could be generated in the mice by using transduced DCs as antigen presenting cells (APCs).

Cytotoxic T lymphocytes (CTLs) are thought to contribute to HBV clearance by killing infected hepatocytes and secreting antiviral cytokines. Acutely infected patients characteristically produce a vigorous, polyclonal, and multispecific CTLs response that is usually sufficient to clear the infection, while persistently infected patients produce a weak or undetectable HBV-specific CTLs response. The cumulated data suggest that CTLs activity may play an important role in resolving HBV infection[4-13]. Based on these observations, therapeutic enhancement of T cell responsiveness to HBV has the potential to terminate chronic HBV infection.

Dendritic cells (DCs) are highly specialized antigen presenting cells (APCs) that possess unique immunostimulatory properties and function as the principal activators of naÏve T cells[14,15]. DCs are distributed throughout the body and can be expanded with granulocyte-macrophage CSF (GM-CSF) and IL-4. When DCs are pulsed with antigen protein or peptide, they can induce specific antibody and CTLs responses both in vitro and in vivo. Since activated DCs express a high level of costimulatory molecules and secrete inflammatory cytokines, they have the potential to activate anergic T cells.

To produce retroviral virus, packing cell (PT67, Clontech, USA) was cultured in a 24 well culture plate with D-MEM containing 10% heat-inactivated FBS and transfected with 1 μg of retroviral vector plasmid pLCSN by lipofectAMINE2000(GIBCO, USA). Colonies were isolated by neomycin selectin (G418, Amresco, USA) and expanded. Supernatants of cloned packing cells were harvested, filtered (0.45 μm pore size), and tested for the presence of virus. Viral titration was performed on NIH3T3 according to the instructions of the manufacturer yielding a titer of 3 × 105 infectious particles/ml.

Bone marrow cells were collected from femurs of C57BL/6 mouse and depleted of red cells with ammonium chloride. After extensively washed with RPMI1640, cells (5 × 105 cells/ml) in RPMI1640 supplemented with 10% FBS, 500 U/mL rmGM-CSF and 250 U/mL rmIL-4 were plated in a 24 well culture plate, incubated at 37 °C in 5% CO2-atmosphere. After 24-h incubation, the cells were transducted with retroviral supernatants and polybrene (Sigma, USA) at a final concentration of 8 μg/ml. The cells were incubated at 37 °C, in 5% CO2 atmosphere for 2-3 h. The supernatant was replaced with RPMI1640 supplemented with 10% FBS, 500 U/mL rmGM-CSF and 250 U/mL rmIL-4 overnight. The transduction procedure was repeated 3 times. After 6 d, LPS (1 μg/ml) was added and mature DC was obtained after additional culture for 2 d. The cells were washed three times, and 5 × 105 DCs suspended in 0.5 mL of PBS were injected subcutaneously. The immunization was repeated after 7 d.

DNA from retrovirally transduced and untransduced DCs was isolated according to the manufacturer's protocol (Boehringer, Germany). DNA was isolated from the G418 resistant PT67 cell line as positive control. Primers used for amplification of HBcAg were mentioned above. PCR was performed for 1 min at 94 °C, for 1 min at 54 °C, and for 1 min at 72 °C for 30 cycles, followed by a final extension time of 6 min at 72 °C. The PCR product was resolved on a 1.5% agarose gel.

Cell lysates were made from retrovirally transduced and untransduced DCs. Protein samples were separated by SDS-PAGE and transferred to nitrocellulose. HBcAg protein was identified using the anti-HBc positive serum as primary Ab and goat anti-human IgG peroxidase-conjugate (1:500, volume ratio) as secondary Ab. The blots were developed using substrate solution containing DAB and H2O2.

Spleen lymphocytes were stimulated with Con A at 20 μg/ml, and 1 μL GolgiPlugTM was added for every 1 mL of cell culture to inhibit cytokine secretion. Lymphocytes were incubated for 6 h, then harvested and washed with staining buffer. Cells were thoroughly resuspended and 100 μL of cytofix/cytoperm solution was added into each well for 20 min at 4 °C. Cells were washed and stained with FITC-labled anti-mouse IFN-γ and PE-labled anti-mouse IL-4, incubated at 4 °C for 30 min in the dark, then washed twice and analyzed with a flow cytometer.

The tumor cell line EL4 (H-2b) was transduced with recombinant retrovirus and then selected in the presence of 400 ug/mL G418. The G418-resistant clones (EL4-C) were screened for HBcAg expression by PCR and indirect immunofluorescence. Spleen cells obtained from individual mice were stimulated with EL4-C treated by 25 μg/mL mitomycin C at effector:stimulator ratio of 20. The specific CTLs were expanded by adding 50 IU/mL of IL-2 for 7 d. The CTLs activity in the cultures was measured in triplicate in a standard four-hour LDH release assay using EL4-C cells as target cells according to the manufacturer's instructions(Roche, Switzerland).

The HBV core gene fragment generated by PCR amplification and digested with EcoR I and BamH I was successfully cloned into downstream of LTR of pLXSN to obtain recombinant retroviral expression vector pLCSN (Figure 1). Recombinant retroviral vector was positively detected by PCR as well as enzyme digestion with EcoR I and BamH I. To produce retroviral virus, packing cells were transfected with retroviral expression vector pLCSN. Colonies were isolated by neomycin selectin and expanded. Supernatants of G418 resistant cells were harvested. The virus titer was 3 × 105 infectious particles/ml. It was found that retroviruses could infect a number of eukaryotic cells, such as NIH3T3, EL4, and SP2/0(data not shown).

To assess the expression of HBcAg in DCs, we transduced bone marrow cells from C57BL/6 mice in packing cell supernatants. The transduced cells were then cultured in the presence of rmGM-CSF, rmIL-4 and LPS for the purpose of differentiation into mature DCs. After cultured for 8 d, the majority of cells displayed distinct DC morphology with many fine dendrites. Retroviral transduction had no influence on DCs expressions of CD80 and class II molecule of MHC (72.94% versus 73.43%, 86.54% versus 91.75%, respectively). T-cell stimulatory activity of DCs in MLR was expressed as stimulation index (SI) value, at a T cell:DC ratio of 80:1, 40:1, 20:1 and 10:1. The SI values were 3.16, 7.26, 23.99, 31.70, respectively. The HBV core gene in transduced DCs was demonstrated by PCR (Figure 2). Approximately 28% of the bone marrow derived cells could express HBcAg determined by flow cytometric analysis. Finally, Western blot analysis demonstrated that HBcAg was expressed in transduced DCs (Figure 3).

Next we evaluated the capability of retrovirally transduced DCs to induce CTLs responses in vivo. C56BL/6 mice were immunized subcutaneously with 5 × 105 DCs transduced with HBcAg. The immunization was repeated after one week. 7 d after the last immunization, the mice were sacrificed and splenocytes were collected. Splenocytes were restimulated in vitro for 7 d in the presence of mitomycin C-treated EL4-C cell and IL-2, and then cocultivated with different target cells at varied E:T ratios to measure target cell lysis with LDH release cytotoxic assay. As shown in Figure 4, splenocytes from mice immunized with transduced DCs demonstrated significantly higher cytotoxicity than those from controlled mice. To determine the type of Th responses, we measured the lymphocyte which could secret IFN-γ or IL-4 with intracellular cytokine analysis. After immunization of retrovirally transduced DCs in mice, lymphocyte producing IFN-γ was significantly higher than that from mice injected only with untransduced DCs (1.15% versus 0.28%). At the same time, lymphocyte producing IL-4 in both mice with injections of transduced and untransduced DCs was similar (0.74% versus 0.47%). 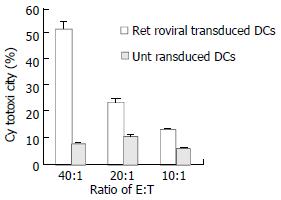 Figure 4 Induction of CTLs against HBcAg responses in vivo.
DISCUSSION

Chronic HBV infection has a significant association with liver cirrhosis and hepatocellular carcinoma. Studies on immunological mechanisms have demonstrated that CTLs play a critical role in the control and termination of HBV infection. CTLs are thought to contribute to HBV clearance by killing infected hepatocytes and secreting antiviral cytokines. Acutely infected patients characteristically produce a vigorous, polyclonal, and multispecific CTLs response that is usually sufficient to clear the infection, while persistently infected patients produce weak or undetectable HBV-specific CTLs responses[4-13]. Based on these observations, therapeutic enhancement of T cell responsiveness to HBV has the potential to terminate chronic HBV infection.

A number of experimental reports showed that CTLs responses could be induced. Vaccination with HBsAg-anti-HBs immune complex could affect HBeAg seroconversion and clearance of serum HBV DNA in patients[16]. Sallberg et al[17] observed a marked decrease of HBV DNA level and seroconversion of HBeAg to anti-HBe in sera of experimental chimpanzees after immunization of HBV core gene using retrovirus. Plasmid DNA immunization has been shown to induce specific antibody and CTLs responses in normal mice and rhesus monkeys[18-20]. ISCOMS-based hepatitis B polypeptide vaccine could also induce a higher CTLs response in vivo[21].

DCs play a central role in humoral and cellular immunity because they can take up and process antigen in peripheral tissues and present the antigen to T cells in secondary lymphoid tissues, such as lymph nodes. The mature DCs screen for passing antigen-specific naïve T cell, and induce primary T cell-mediated immune response. Mature DCs are thought to be functionally competent and have been used in clinical studies to induce antigen-specific T cells[14,15,22,23]. In this study, we used DCs as an attractive approach for immunotherapy of chronic HBV infection. In developing strategies to optimize the use of DCs in immunotherapy, viral transduction of DCs with antigen genes may offer more advantages over peptide-pulsed DCs. The efficacy of peptide-pulsed DCs might be limited in vivo, because peptides pulsed onto DCs stay bound to MHC molecules only transiently. Additionally, use of peptide-pulsed DCs is dependent on the knowledge of the HLA haplotype of patients. Transduction of DCs by viral vectors can produce a high level of antigen expression, and endogenous protein synthesis may allow presentation of antigens by class I molecules of MHC, resulting in induction of CD8+ CTLs responses. Several viruses have the potential for use in immunotherapy, such as vaccina virus, adenovirus, and retrovirus[24]. Retroviral transduction of DCs may allow constitutive expression of protein leading to prolonged antigen presentation in vivo, and presentation of multiple or unidentified antigen epitopes in the context of class I and II molecules of MHC. But as nonreplicating, mature DCs are poor candidates for retroviral gene modification. However, dividing bone marrow progenitor cells can be efficiently transduced with retroviral vectors[25-29]. In this study, rapidly dividing bone marrow progenitor cells were used as targets for retroviral transduction and cultured in the presence of GM-CSF and IL-4 plus LPS. Our results showed that retrovirally transduced progenitor cells could differentiate into mature DCs in vitro, transduced or untransduced dendritic cells expressed comparable levels of CD80 and class II of MHC, the transduction efficiency was about 28%. Retrovirally transduced DCs could be used to induce strong CTLs responses in C57BL/6 mice in vivo.

Previous studies showed that Th1 type response was beneficial for the clearance of chronically infected viruses[30,31]. The profiles of cytokine production were indicators of helper T cell responses. IFN-γ and IL-4 were observed in the present experiment as Th1 and Th2 type cytokines, respectively. After immunization of retroviral transduced DCs, lymphocyte producing IFN-γ was significantly higher than that from mice injected only with untransduced DCs, indicating Th1 type immune responses occurred in mice immunized with retroviral transduced DCs.