AIM: To construct a recombined human AFP eukaryotic expression vector for the purpose of gene therapy and target therapy of hepatocellular carcinoma (HCC).

METHODS: The full length AFP-cDNA of prokaryotic vector was digested, and subcloned to the multi-clony sites of the eukaryotic vector. The constructed vector was confirmed by enzymes digestion and electrophoresis, and the product expressed was detected by electrochemiluminescence and immunofluorescence methods.

RESULTS: The full length AFP-cDNA successfully cloned to the eukaryotic vector through electrophoresis, 0.9723 IU/mL AFP antigen was detected in the supernatant of AFP-CHO by electrochemiluminescence method. Compared with the control groups, the differences were significant (P < 0.05). AFP antigen molecule was observed in the plasma of AFP-CHO by immunofluorescence staining.

Hepatocellular carcinoma (HCC) is a very common malignancy in China[1-5], and it has a very poor prognosis[6-9]. Only a minority of patients are eligible for surgical therapies due to advanced tumors or extrahepatic diseases at primary diagnosis[10,11]. Therefore, it is urgent to find a novel strategy to prevent the proliferation of malignant cells. It is a hot spot at present to study prophylactic vaccination targeting the tumor-associated antigen (TAA) or tumor-specific antigen (TSA). This approach has been successful in mouse models, such as the tyrosinase-related protein (TRP)-2 in murine melanoma[12,13]. A colon cancer specific DNA vaccination directed against the carcinoembryonic antigen (CEA) is in phase I clinical trial[14].

The oncofetal alpha-fetoprotein (AFP) may be a possible target for an HCC-specific vaccination. It is a 70-ku to 80-ku secretory protein that is heterogeneously glycosylated. AFP is usually expressed at high concentrations in fetal liver, gastrointestinal tract, and the yolk sack. It is transcriptionally down-regulated after birth, and frequently re-expressed in HCC and therefore, used as a diagnostic marker for this tumor[15-21]. Serum AFP is useful not only for diagnosis, but also a prognostic indicator for HCC patients[22,23]. AFP mRNA has been proposed as a predictive marker of HCC cells disseminated into the circulation and for metastatic recurrence[24-27]. Some experiments in vitro have also demonstrated that AFP promotes cell proliferation of hepatoma cell lines[28,29].

AFP may be used as a target molecule for immunotherapy or prophylaxis against HCC. For this purpose, we constructed the recombined human AFP eukaryotic expression vector, and hope that it will provide experimental data for the treatment of HCC.

Transformation of competent bacterial DH5-awas carried out with pRESTA-AFP. The transformed cell DH5-awas transferred onto LB medium which was anti-aminobenzyl penicillin, cultured overnight in an incubator at 37 °C. Four-five clones were selected and maintained in LB medium, and shaken overnight at 37 °C.

Five mL bacterial medium was picked up, and the plasmid DNA was extracted following the procedures of EZNA plasmid miniprep kit (Omega). The extracted DNA was digested by BamH I and EcoR I (TaKaRa). The digested products were evaluated with 10 g/L agarose gel electrophoresis.

The human full-length AFP-cDNA was retrieved following the procedures of UNIQ-10 centrifugation column type gel retrieve kit (Sangon, Shanghai) and ligated to the multi-clony sites of pCEFL that was digested by BamH I and EcoR I at a ratio of 10:1 with T4 DNA ligase (TaKaRa). Amplification, extraction, digestion and evaluation were performed according to the above-mentioned methods. It demonstrated that the full-length AFP-cDNA was inserted into pCEFL successfully, and named pCEFL-AFP.

Detection of AFP expression by electrochemiluminescence

Detection of AFP expression by immunofluorescence

The transfected cells were stabilized with 10 g/L formaldehydum polymerisatum for 30 min at 4 °C, and blocked with 100 g/L bovine serum albumin (BSA) for 1 hour at room temperature, then coated with rabbit anti-human AFP antibody (Dako) for 45 min at 37 °C, followed by goat anti-rabbit IgG-FITC (Boster, Wuhan) for 30 min at 37 °C. The antibody-coated cells were observed under fluorescence microscope (Optiphot XIF, Nicon, Japan) within 24 h.

Student's t test was used to compare the difference of AFP molecule in the supernatants between control groups and transfected pCEFL-AFP group. P value less than 0.05 was considered statistically significant.

pRESTA-AFP was digested by BamH I and EcoR I and evaluated with electrophoresis. Figure 1 shows that pRESTA-AFP contained the full-length human AFP-cDNA. 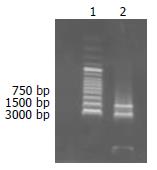 Figure 1 Electrophoresis of pRESTA-AFP. 1. Marker, 2. Full length AFP-cDNA in the upper, pRESTA in the lower.
Evaluation of pCEFL-AFP 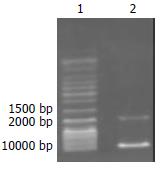 Figure 2 Electrophoresis of pCEFL-AFP. 1. Marker, 2. Full length AFP-cDNA in the upper, pCEFL in the lower.
AFP molecule expression in the supernatant

The transfected cells were coated with AFP antibody and fluorescent antibody. Under fluorescence microscope, it could be observed that the fluorescence staining was positive in the cytoplasm of CHO cells transfected with pCEFL-AFP and negative in the controls (Figure 3 Figure 4, Figure 5). 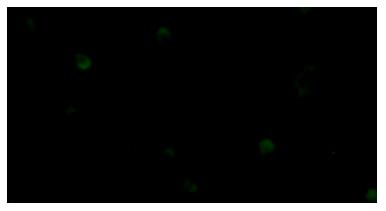 Figure 3 CHO transfected with pCEFL-AFP. The fluorescence staining in the cytoplasm was positive. × 400. 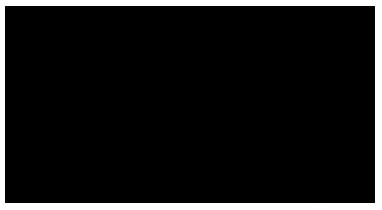 Figure 4 CHO transfected with pCEFL. The fluorescence staining in the cytoplasm was negative. × 400. 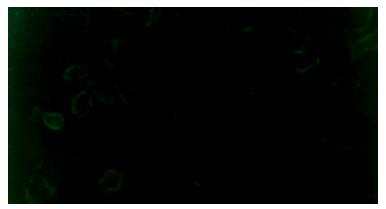 Figure 5 Non-transfected CHO. The fluorescence staining in the cytoplasm was negative. × 400.
DISCUSSION

In China, the incidence of HCC is very high, and surgical operation, chemotherapy, and interventional therapy are the common therapies. But only a few patients of earlier stage without extrahepatic malignancy are indicated for operation, and for the advanced cases, chemotherapy and interventional therapy usually cannot achieve a satisfactory effect. AFP is a TAA of HCC, which may be used as a target for treatment.

Vollmer et al[30] firstly showed a prophylactic effect of an AFP-specific DNA vaccination on the growth of AFP-positive tumor cells in C57BL/6 mice. In their experiments, only 7.4% of mice were fully protected from tumor growth. In the remaining animals, a prolonged time until tumors reached diameters of 10 mm was observed. Wang et al[31] found that antisense S-ODNs targeting AFP gene treatment led to reduced AFP gene expression. Specific antisense S-ODNs, but not control S-ODNs, inhibited the growth of hepatoma cells in vitro. In vitro, only antisense S-ODNs exhibited obvious antitumor activities. Guo et al[32] found that the dendritic cells (DCs) based vaccine with HLA-A2 restricted peptide epitope derived from hAFP have marked cytotoxicity against AFP positive primary HCC. In their experiments, after stimulated by DCs loaded with CTL epitope based peptide derived from hAFP, lymphocytes showed good characteristics and the culture medium of activated lymphocytes contained a high level of Th1 type cytokines of IL-12 and TNF. Activated lymphocytes not only specifically lysed HLA-A2 (+) HepG2 line but also had the cytotoxicity against T2 target cells loaded with peptide of hAFP. Hanke et al[33] demonstrated that DNA vaccination with AFP-encoding plasmid DNA could prevent the growth of subcutaneous AFP-expressing tumors and not interfere with liver regeneration in mice. Grimm et al[34] achieved similar outcomes.

Since immunotherapy or gene therapy targeting TAA or TSA is a direction of tumor therapy, AFP as a TAA of HCC, has shown its profound effect on HCC treatment in animal models. In our experiment, we constructed the recombined human AFP eukaryotic expression vector successfully. This, we believe, provides experimental data for gene therapy and immunotherapy of HCC. It may be used as a treatment target of human HCC.