AIM: To study the role of Fas ligand (FasL) and Caspase-3 expression in carcinogenesis and progression of gastric cancer and molecular mechanisms of relevant immune escape.

CONCLUSION: Up-regulated expression of FasL and down-regulated expression of Caspase-3 in cancer cells of primary foci play an important role in gastric carcinogenesis. As an effective marker to reveal the biological behaviors, FasL is implicated in differentiation, growth, invasion and metastasis of gastric cancer by inducing apoptosis of infiltrating lymphocytes. Chemical substances derived from the primary foci and metastatic microenvironment can inhibit the growth of metastatic cells by enhancing Caspase-3 expression and diminishing FasL expression.

Gastric cancer is one of the commonest malignancies in China, and even in the world[1-7]. Although early diagnosis and treatment have somewhat improved the patients outcome, gastric cancer still remains the major killer among Chinese[8,9]. The stepwise transitions during gastric carcinogenesis and progression show that growth-limited gastric epithelial cells become immortalized and in turn exhibit malignant phenotypes[10,11]. It is obvious that the intrinsic regulatory systems for normal cell survival and death are perturbed in these sequential changes of gastric carcinogenesis and progression, so a further understanding of aberrant apoptosis of gastric epithelial cells and cancer cell will be of great significance in the prevention, diagnosis and treatment of gastric cancer.

Fas ligand (FasL) is a family member of tumor necrosis factor (TNF) and nerve growth factor (NGF), which maps to human chromosome 1[12]. When membrane FasL (mFasL) crosslinks with membrane Fas (mFas), cellular apoptosis is induced. However, soluble Fas is released into tumor microenvironment to neutralize FasL on tumor infiltrating lymphocytes and consequently blocks their apoptotic induction, leading to tumor immune escape[13]. Some matrix metalloproteinases can hydrolyze the mFasL into impotent soluble FasL, which can resist apoptosis-induced effect by lymphocytes[14]. In Fas/FasL pathway, association of Fas with FasL can activate the Fas-associated death domain (FADD) and make mitochondrion release cytochrome C[15], which eventually initiates the key Caspase-3 in catalyzing the specific cleavage of many important cellular proteins during apoptosis[16,17].

Capase-3/CPP32 is a member of the interleukin-1β-converting enzyme (ICE) family, which specifically cleaves substrates at the C-terminal of aspartic acid residues. Capase-3 includes two types of CPP32α and CPP32β with cysteine protease activity, and shows a high homology to the pro-apoptotic ced-3 of C elegans[18,19]. Several members of the Caspase family have been implicated in apoptosis, among which Caspase-3 is thought to act as a central mediator of programmed cell death (PCD) in mammalian cells[20]. Caspase-3 is synthesized as an inactive 32 kd proenzyme and processed during apoptosis into its active form that is composed of two subunits, p17-20 and p10-12. Activated Capase-3 is responsible for the cleavage of poly (ADP-ribose) polymerase (PARP), actin and sterol regulatory element binding protein (SREBP), which relate to apoptosis[19,21-23]. Inhibition of the CPP32-induced proteolytic breakdown of PARP has been demonstrated to result in the attenuation of apoptosis[15].

Surgical specimens of 113 gastric cancers were studied from the Second Affiliated Hospital of China Medical University from Sep. 1997 to Feb. 2001. None of the patients underwent radiotherapy or chemotherapy before operation. Adjacent mucosa and primary tumors of all the cases, as well as 43 metastases from 38 cases were fixed in 4% formaldehyde solution, embedded in paraffin and cut into 4 μm sections.

Hematoxylin-and-eosin-stained sections were examined by two pathologists to confirm the histological diagnosis and other microscopic characteristics. These cancers were histologically classified into differentiated and undifferentiated cancers. Their growth pattern was classified into mass, nest, or diffuse types, as reported previously[6]. Penetration of gastric wall, lymph node and distal metastases were routinely described in each patient. Tumor staging was assessed according to TNM classification system.

The representative and consecutive sections from each adjacent mucosa, primary and secondary tumor were immunostained with streptavidin-peroxidase technique (S-P kit, Zhongshan Biotech.). Anti-FasL antibody (Boster Biotech.) and anti-Caspase-3 antibody (DAKO Biotech.) were diluted in phosphate-buffered saline (PBS, 0.01 mol/L, pH7.4) at the dilution ratio of 1:50 and 1:100 respectively. All procedures were implemented according to the product illustration. For negative controls, sections were processed as the above but with PBS instead of the primary antibodies.

Evaluation of FasL and Caspase-3 staining

The immunoreactivity to FasL or Caspase-3 was localized in the cytoplasm. From 5 randomly selected representative fields of each section, one hundred cells were counted by two independent observers, who did not know the clinicopathological features of these gastric cancers. According to proportion of positive cells, the degree of staining achieved with their antibodies was graded as follows: negative (-), ≤ 5%; weakly positive (+), 5%-25%; moderately positive (++), 25%-50%; and strongly positive (+++), ≥ 50%.

Statistical evaluation was performed using chi-square to differentiate the rates of different groups and using Spearman’s test to analyze ranking correlation. P < 0.05 was considered statistically significant. SPSS 10.0 software for Windows was employed to analyze all data.

RESULTS
FasL and Capase-3 expression in adjacent epithelial cells, cancer cells and lymphocytes of the primary foci, and cancer cells of the metastatic foci of gastric cancer 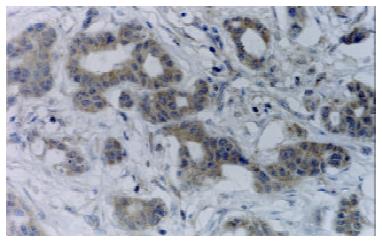 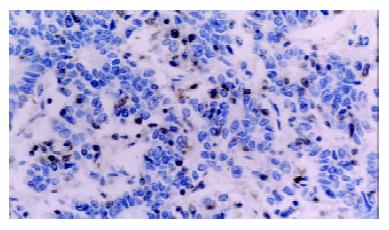 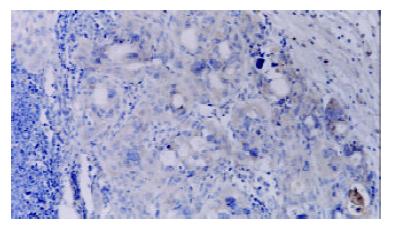 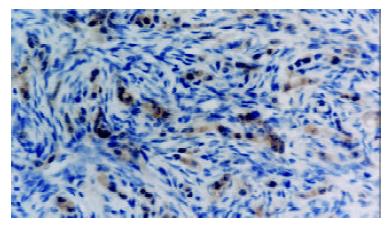 Relationship between FasL and Caspase-3 expression in gastric cancer

As a transmembrane type II protein, FasL initiates PCD through activating FADD when coupled with mFas, so FasL greatly contributes to apoptotic induction in most cells[25]. During the course, Caspase-3 will be activated by a series of cascade reactions, and eventually DNase (CAD, CPAN, or DEF40) is activated, which belongs to the Mg2+-dependent endonuclease and acts as a killer in apoptosis. Some previous studies demonstrated that esophageal and colon cancers highly expressed FasL at the levels of mRNA and protein. Furthermore, increased FasL can bind to mFas in infiltrating lymphocytes, which is eliminated by inducing their apoptosis[26,27]. Therefore, cancer cells can form an immune escape.

In this study, we found that FasL and Caspase-3 were expressed in 34.51% (39/113) and 50.44% (57/113) of adjacent epithelial of gastric cancer respectively, most of which exhibited inflammation, regeneration, or intestinal metaplasia. Li et al[24] detected FasL expression in normal gastric mucosa and atrophic gastritis. It was previously documented that most cells from human organs showed positive immunoreactivity to Caspase-3, including cryptal cells of gastric pit. These data indicate that FasL and Caspase-3 play an important role in regulating the balance of cellular proliferation and apoptosis in gastric mucosa by inducing apoptosis.

Moreover, FasL is more frequently expressed in cancer cells of primary foci than in their adjacent epithelial cells (P < 0.05). Belluco et al[28] found that FasL was overexpressed in adenoma-adenocarcinoma of colorectum and FasL expression paralleled to malignant degrees. These results suggest that up-regulated expression of FasL contributes to gastric carcinogenesis. On the other hand, Capase-3 expression was less frequently detected in cancer cells of the primary foci, than in the adjacent epithelial cells (P < 0.05), as described previously[29]. Hoshi et al[30] also found the positive rate of Caspase-3 expression was lower in gastric cancers than in their adjacent mucosa and gastric adenoma, and was correlated negatively with proliferative index of Ki-67, as well as positively with apoptotic index labeled by TUNEL. These studies reveal that down-regulated expression of Capase-3 is implicated in gastric carcinogenesis.

We thank Mrs Zhao Yuhong and Mrs Huang Yaming for their contribution to the preparation of this manuscript.