AIM: To investigate the role of glycylproline dipeptidyl aminopeptidase (GPDA) isoenzyme in the diagnosis of primary hepatocellular carcinoma (PHC), especially in patients with negative alpha-fetoprotein (AFP).

METHODS: A stage gradient polyacrylamide gel discontinuous electrophoresis system was developed to separate serum GPDA isoenzymes, which were determined in 102 patients with PHC, 45 cases with liver cirrhosis, 24 cases with chronic hepatitis, 35 cases with benign liver space-occupying lesions, 20 cases with metastatic liver cancer and 50 cases with extra-hepatic cancer, as well as 80 healthy subjects. The relationships between GPDA isoenzymes and AFP, the sizes of tumors, as well as alanine aminotransferase (ALT) were also analyzed.

RESULTS: Serum GPDA was separated into two isoenzymes, GPDA-S and GPDA-F. The former was positive in all subjects, while the latter was found mainly in majority of PHC (85.3%) and a few cases with liver cirrhosis (11.1%), chronic hepatitis (33.3%), metastatic liver cancer (15.0%) and non-hepatic cancer (16.0%). GPDA-F was negative in all healthy subjects and patients with benign liver space-occupying lesions, including abscess, cysts and angioma. There was no correlation between GPDA-F and AFP concentration or tumor size. GPDA-F was consistently positive and not correlated with ALT in PHC, but GPDA-F often converted to negative as decline of ALT in benign liver diseases. The electrophoretic migration of GPDA-F became sluggish after the treatment of neuraminidase.

CONCLUSION: GPDA-F is a new useful serum marker for PHC. Measurement of serum GPDA-F is helpful in diagnosis of PHC, especially in patients with negative AFP. GPDA-F is one kind of glycoproteins rich in sialic acid.

Glycylproline dipeptidyl aminopeptidase (GPDA) was discovered by Hapsu-Hava and Glenner in 1966[1]. It is widely distributed in human and animal tissues and catalyzes the hydrolysis of N-terminal glycylproline from glycylprolyl-β-naphthylamide and glycylproline-β-nitroanilide. It was reported that serum GPDA activity increased in the patients with hepatobiliary diseases and in experimental hepatic cancer[2,3]. Further studies demonstrated that GPDA activity was significantly higher in human hepatic cancer and embryonal tissues than in healthy adult liver tissues[4]. However, serum GPDA cannot be used as a marker for PHC due to its low sensitivity and specificity in diagnosis.

In order to improve the diagnostic value of GPDA for PHC, a stage gradient polyacrylamide gel discontinuous electrophoresis system was established to separate serum GPDA into two isoenzymes, and clinical significances of serum GPDA isoenzymes in diagnosis of PHC were studied.

The resources of all patients in this study were from Affiliated Hospital of Nantong Medical College. The diagnosis of PHC met the diagnostic criterion of Liver Cancer Branch Committee of Chinese Anti-cancer Association. The diagnosis in 35 patients was confirmed pathologically. The origins of 20 metastatic liver cancers were gastrointestinal tract cancer (16 cases), lung cancer (2 cases) and breast cancer (2 cases). The origins in 50 cases with extra-hepatic cancer were gastrointestinal tract (22 cases), pancreas (5 cases), bile duct (6 cases ), ovary (8 cases), bladder (4 cases), lung (4 cases) and kidney (1 case). Thirty-five benign liver space-occupying lesions were composed of 8 liver abscess, 2 liver cysts and 25 liver angioma. The diagnoses of 45 cases with hepatic cirrhosis and 24 chronic hepatitis were based on clinical manifestations and liver biopsy. The control samples came from healthy blood donor.

Separation of GPDA isoenzymes was performed on stage gradient polyacrylamide gel with a vertical slab electrophoresis apparatus. The gel consists of one layer of stack gel and two layers of separating gels. The following solutions were used for the preparation of gels: (1) Solution A: 30% acrylamide containing 0.8% bisacrylamide; (2) Solution B: 4.95% Tris base containing 0.05% TEMED, pH6.9; (3) Solution C: 0.14% ammonium persulfate. A gel of dimensions of 12.0 cm × 10.0 cm × 0.15 cm was prepared and loaded with 20 µl of serum. The gel run at a constant voltage of 60 V for the first three hours and then at the voltage of 100 V for another 16 hours. After the electrophoresis, the gel was incubated at 37 °C for 30 min with a piece of acetate cellulose membrane of the gel size pre-soaked with a substrate solution, which consists of 15 mg of glycylproline-β-nitroanilide, 4.8 ml of 100 mmol·L-1 Tris-glycylglycine (pH8.4), 0.1 ml of 100 ml·L-1 sodium nitrite and 0.1 ml of 50 g·L-1 N-(naphthyl)-ethylenediamine dihydrochloride. Finally red GPDA isoenzyme bands were visualized soon by immersing the acetate cellulose membrane into a solution composed of 100 ml·L-1 trichloracetic acid and 250 ml·L-1 glycerol.

Measurement of AFP and ALT

ALT was measured with the method recommended by International Federation of Clinical Chemistry[5] and AFP was determined with routine radioimmunoassay.

Treatment of serum with neuraminidase

Serum was incubated with 10 u/mL neuraminidase at 37 °C for 15 hr before electrophoresis.

RESULTS
Serum GPDA isoenzyme in patients with PHC and other diseases

Serum GPDA was separated into two isoenzyme bands with the electrophoresis system (Figure 1). The band in the anode was called as GPDA-F (fast band) and the band in cathode as GPDA-S (slow band). GPDA-S was positive in all subjects, including healthy persons and patients, while positive rates of GPDA-F varied in different diseases. GPDA-F was found in most patients with PHC and a few patients with benign liver diseases and extra-hepatic cancer, but no GPDA-F was found in all healthy persons and the patients with benign liver space-occupying lesions (Table 1). In patients with PHC, positive GPDA-F was considered as true positive and negative GPDA-F as false negative, while in patients with other diseases positive GPDA-F was considered as false positive and negative GPDA-F as true negative. Therefore, the sensitivity, specificity and accuracy of GPDA-F in diagnosis of PHC were 85.3%, 86.2% and 85.9% respectively (Table 1). 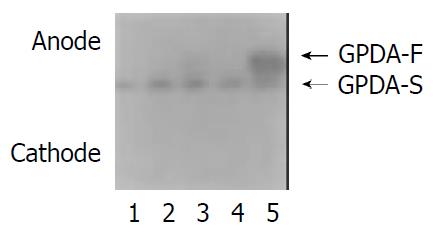 There was no correlation between positive rates of GPDA-F and AFP concentration (Table 2). GPDA-F was positive in 75.0% PHC cases with negative AFP (< 50 ng/mL). If positive GPDA-F and AFP ≥ 50 ng/mL were set as diagnostic criterion of PHC, the sensitivity of AFP was 72.5% and that of AFP with GPDA-F would reach up to 91.2%. The diagnostic accuracy was also increased with the combination of AFP and GPDA-F (Table 3).

The relationship between GPDA-F and tumor size

Characteristics of GPDA-F in PHC and benign liver diseases

In order to know whether GPDA-F is associated with inflammation of hepatocytes, GPDA-F and ALT were measured simultaneously. There was no significant difference of ALT activities between positive and negative GPDA-F groups in PHC, but ALT activities in positive GPDA-F group were significantly higher than that in negative group in liver cirrhosis and chronic hepatitis (Table 4), suggesting that GPDA-F was associated with elevated ALT in benign liver diseases, but not in PHC. It was also found that GPDA-F often converted to negative with the decrease of ALT in benign liver diseases but no in PHC (data not shown).

Effects of neuraminidase on GPDA-F

Serum was treated with neuraminidase before electrophoresis as mentioned in materials and methods. The migration rate of GPDA-F became slower than that of GPDA-S following treatment of neuraminidase, while GPDA-S was not obviously affected (Figure 2). 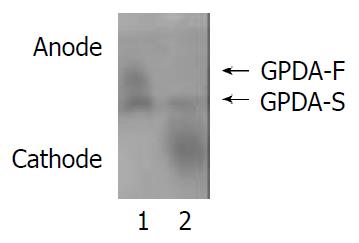 PHC is one of the most severe malignancies and ranks second mortality in malignant tumors in China[6,7]. The prognosis is poor due to its delayed diagnosis and low resectable rate. Thus early diagnosis is important to improve the prognosis. Tumor markers are very useful in diagnosis. AFP is the most widely used tumor marker for PHC with a positive rate from 60% to 70%[8-11]. AFP-L-3, one of the glycoforms of AFP, has higher specificity for PHC. However, it cannot increase the diagnostic sensitivity[12-16]. Many studies have focused on other tumor markers to improve the diagnostic sensitivity for PHC. It has been found that there are some tumor markers, which are complementary to AFP in diagnosis of PHC, such as des-gamma-carboxy prothrombin (PIVKA-II)[17-23], γ-glutamyltransferase isoenzyme[24-26], transforming growth factor-β1[27-29] and α-L-fucosidase[30-34].

In present study, we have investigated the value of GPDA isoenzymes in diagnosis of PHC. With a stage gradient polyacrylamide gel electrophoresis system, serum GPDA has been separated into two isoenzymes, GPDA-F and GPDA-S. GPDA-F was often detected in sera of patients with PHC, with a much higher positive rate than in other liver diseases, including liver cirrhosis, chronic hepatitis, metastatic liver cancer and extra-hepatic tumors; while GPDA-F was negative in healthy subjects and patients with benign liver space-occupying lesions. The sensitivity and specificity of GPDA-F in diagnosis of PHC were 85.3% and 86.2%, respectively. These results indicate that GPDA-F may be a valuable serum marker for PHC.

Serum GPDA-F in patients with benign liver diseases possibly originates from the inflammatory hepatocytes because in such cases positive GPDA-F was often accompanied by elevated ALT and changed to negative with the decline of ALT. On the contrary, GPDA-F in PHC is persistently positive and not correlated with ALT. Therefore, simultaneous determination and follow-up of ALT may help to rule out the false positive GPDA-F in benign liver diseases. It is known that some serum hepatoma markers are of predictive and early diagnostic value for PHC, such as AFP, des-gamma-carboxy prothrombin and gamma-glutamyltransferase isoenzyme II[21-23,26]. Whether persistent positive of GPDA-F in a few cases of liver cirrhosis is the precursor of hepatocarcinogenesis needs further investigation.

Although the diagnostic efficiency for PHC has been greatly improved in recent years with the use of many advanced image techniques, it is still difficult to make the diagnosis in some cases, especially for those at early stage or with negative AFP. Present study showed that GPDA-F and AFP were complementary for diagnosis of PHC. In these data, GPDA-F was positive in 75% PHC cases of negative AFP but negative in all benign liver space-occupying lesions. Therefore, GPDA-F is of special value for the differential diagnosis of liver space-occupying lesions of unknown nature. Our data also showed that there was no correlation between tumor size and GPDA-F. In 23 cases of small liver cancer, the positive rate of GPDA-F was 78.3%, suggesting that GPDA-F may be a good marker of PHC at early stage.

The exact mechanism by which GPDA-F appears in the sera of PHC cases is not clarified. It is possible that GPDA-F is produced by hepatoma tissues and then released into blood, since GPDA-F was only found in sera of those PHC cases in whose hepatoma tissues GPDA-F was positive (unpublished data). The electrophoretic migration of GPDA-F became slower than its isoenzyme GPDA-S after treatment with neuramidinase, indicating that GPDA-F is a kind of glycoprotein rich in sialic acids in its sugar chain. Therefore, the modification of the sugar chain after GPDA protein synthesis may be the main process of the production of GPDA-F. It has been known that several kinds of glycoproteins synthesized by hepatoma cells are different from those produced by hepatocytes. For example, AFP and alpha-1-antitrypsin have higher percentage of lens culinaris agglutinin-reactive species in hepatocellular carcinoma than in benign liver diseases. It is also clear that the fucosylation of the sugar chain at the innermost N-acetylglucosamine is the molecular basis of this variation[35,36] Whether there is the difference of fucosylation of GPDA isoenzymes between hepatocellular carcinoma and benign liver diseases needs to be studied further.