AIM: To evaluate the effects of tributyrin, a pro-drug of natural butyrate and a neutral short-chain fatty acid triglyceride, on the growth inhibition of human gastric cancer SGC-7901 cell.

RESULTS: Tributyrin could initiate growth inhibition of SGC-7901 cell in a dose- and time-dependent manner. [3H]-TdR uptake by SGC-7901 cells was reduced to 33.6% after 48 h treatment with 2 mmol·L-1 tributyrin, compared with the control (P < 0.05). Apoptotic morphology was detected by TUNEL assay. Flow cytometry revealed that tributyrin could induce apoptosis of SGC-7901 cells in dose-dependent manner. After 48 hours incubation with tributyrin at 2 mmol·L-1, the level of Bcl-2 protein was lowered, and the level of Bax protein was increased in SGC-7901, accompanied by PARP cleavage.

CONCLUSION: Tributyrin could inhibit the growth of gastric cancer cells effectively in vitro by inhibiting DNA synthesis and inducing apoptosis, which was associated with the down-regulated Bcl-2 expression and the up-regulated Bax expression. Therefore, tributyrin might be a promising chemopreventive and chemotherapeutic agent against human gastric carcinogenesis.

Gastric cancer is one of the most common causes of malignancy-related death worldwide. In China, the annual average mortality rate of gastric carcinoma is as high as 16 per 100 thousand[1]. Environmental factors, diet that is high in salts and low in fresh fruit and vegetables are regarded as the risk of stomach cancer[2-6]. Although plenty of advances have been made in the gastrointestinal medicine, the inability to diagnose early and treat effectively of the gastric cancer remains an unsolved problem for clinicians[7-23].

Chemoprevention and chemotherapy including the use of natural products, synthetic compounds or dietary substances are promising ways to stop or reverse the process of carcinogenesis[24]. Large number of minor dietary components has been found to inhibit carcinogenesis at various stages[25]. Tributyrin is a neutral short-chain fatty acid triglyceride existed in some spice plants at low levels in nature[26], and has been approved as a food additive in the United States[27]. Tributyrin is also a pro-drug of natural butyrate synthesized by the bacterial fermentation of various complex carbohydrates unabsorbed in the digestive tract[28] and has been reported bearing anti-tumor effect on neoplastic cells[27,29,30] as well as inhibiting proliferation and stimulating differentiation in multiple cancer cell lines. Most importantly, tributyrin is more lipophilic compared with the butyrate and can be metabolized by the intracellular lipases, progressively releasing therapeutically effective butyrate directly in the cell[26,31]. However, the underlying mechanisms of tributyrin against different types of tumor remain to be understood and so far, the effect of tributyrin on gastric cancer cells has not been reported yet.

In this study, we are trying to evaluate the ability of tributyrin to inhibit cell proliferation, arrest DNA synthesis and induce apoptosis in human gastric cancer SGC-7901 cells and go further into some apoptosis-related events in these processes.

MTT assay was conducted to determine the cell proliferation. SGC-7901 cells were seeded in a 96-well plate (1 × 104·well-1) as described previously[32]. In brief, after 24 h incubation cells were treated with tributyrin for three days and untreated cells served as a control. Prior to the determination, 5 µL of the 2.5 g·L-1 stock solution of 3-[4,5-dimethylthiaolyl]-2,5-diphenyl-tetrazolium bromide (MTT) was added to each well. After 4 h incubation, the culture media were discarded followed by addition of 100 µL of DMSO to each well and vibration for 10 min. The absorbance (A) was measured at 492 nm with a microplate reader. The percentage of viable cells was calculated as follows: (A of experimental group/A of control group) × 100%.

The cells were treated with 2 mmol·L-1 Tributyrin for the indicated time as described previously[33]. 74 kBq of [3H]-TdR were added to cells 3 h before the end of the culture. Cells were then washed with ice-cold PBS and 5% trichloroacetic acid and lyzed in 0.25 mol·L-1 NaOH. The lysates were neutralized with 3 mol·L-1 HCl and [3H]-TdR uptake was measured with Beckman LS5000 TD liquid scintillation counter.

The cultured cells treated with 2 mmol·L-1 tributyrin for 48 h were trypsinized and harvested, respectively. Subsequently the cells were immersed with Epon 821, embedded in capsules and converged at 60 °C for 72 h, then they were prepared into ultrathin section (60 nm) and stained with uranyl acetate and lead citrate. Cell ultrastructure was examined by transmission electron microscopy.

Apoptosis of SGC-7901 cells was analyzed by using in situ cell death detection kit. The method is essentially based on the terminal deoxynucleotidyl transferase-mediated dUTP nick end labeling (TUNEL) technique. In brief, after cells were treated with or without tributyrin for the indicated time, they were fixed overnight in 100 g·L-1 formaldehyde, then treated with proteinase K and H2O2, labeled with fluorescein dUTP in a humid box at 37 °C for 1 h and visualized under fluorescence microscope. The cells without addition of TdT enzyme were used as negative control.

The experimental cells were lysed in lysis buffer [25 mmol·L-1 HEPES, 1.5% Triton X-100, 1% sodium deoxycholate, 0.1% SDS, 0.5 mol·L-1 NaCl, 5 mmol·L-1 EDTA, 50 mmol·L-1 NaF, 0.1 mmol·L-1 sodium vanadate, 1 mmol·L-1 phenylmethylsulfonyl fluoride (PMSF), and 0.1 g·L-1 leupeptin (pH7.8)] at 4 °C with sonication. The lysates were centrifuged at 15000 g for 15 min at 4 °C and the proteins were separated on SDS-PAGE, transferred to nitrocellulose filter and incubated with antibodies against Bcl-2, Bax, PARP, and Actin, respectively. Then the membrane was incubated with peroxidase-conjugated secondary antibodies. Detection was performed with enhanced chemiluminescence reagent. 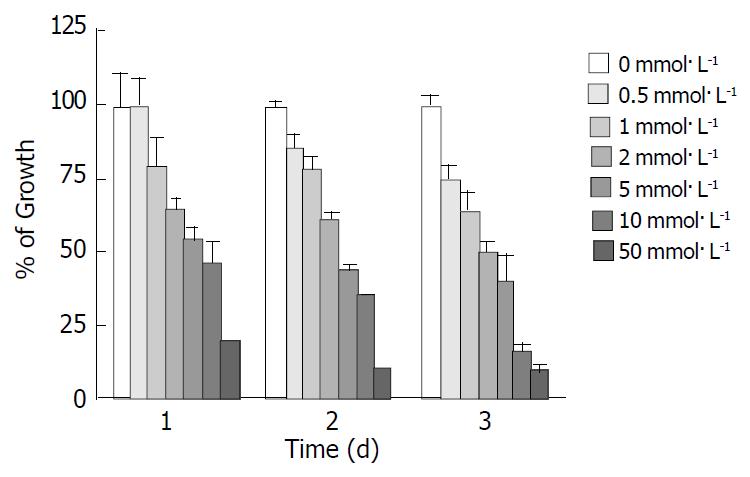 Figure 1 Effect of tributyrin on cell growth in SGC-7901 cells. The cells were treated with various concentrations of tribu-tyrin for 24, 48 and 72 h. The antiproliferative effect was mea-sured by MTT assay. Results were expressed as the means ± SD from three independent determinations.
DNA synthesis arrest by tributyrin 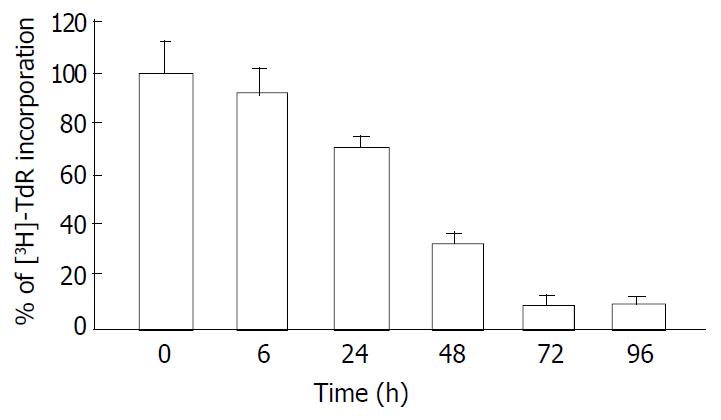 Figure 2 Inhibitory effect of tributyrin on DNA synthesis in-corporated with 3H-TdR. With the concentration of 2 mmol·L-1, tributyrin inhibited the [3H]-TdR uptake by SGC-7901 cells in a time-dependent manner. Results were expressed as means ± SD from three independent determinations.
Tributyrin induction of apoptosis 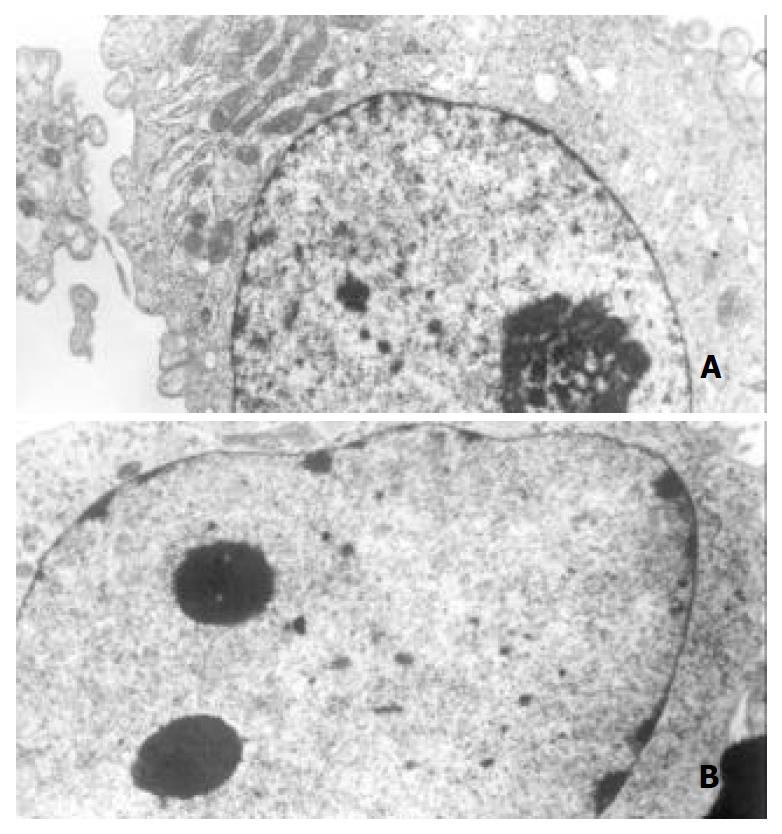 Figure 3 Ultrastructural changes of the gastric cancer cells treated with 2 mmol·L-1 tributyrin for 48 h. (A) The control SGC-7901 cell; (B) the experimental cell showing early changes of apoptosis in which nuclear chromatin condensation and cell shrinkage were observed (B). 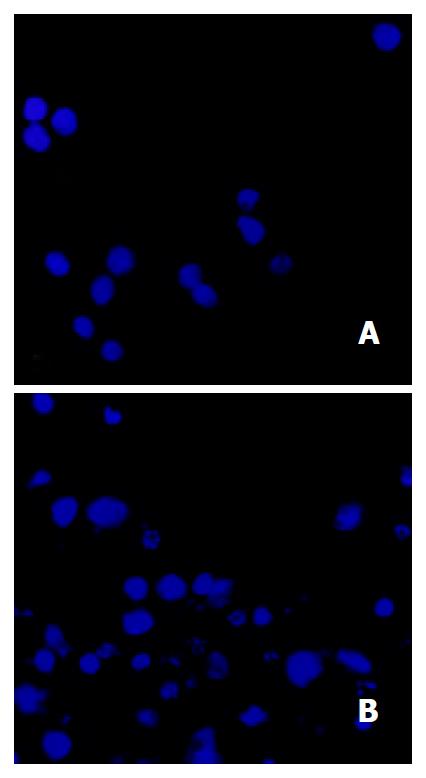 The TUNEL assay revealed that tributyrin could induce the apoptosis of SGC-7901 cells, while the negative control did not show any signs of fluorescence signals (Figure 5). 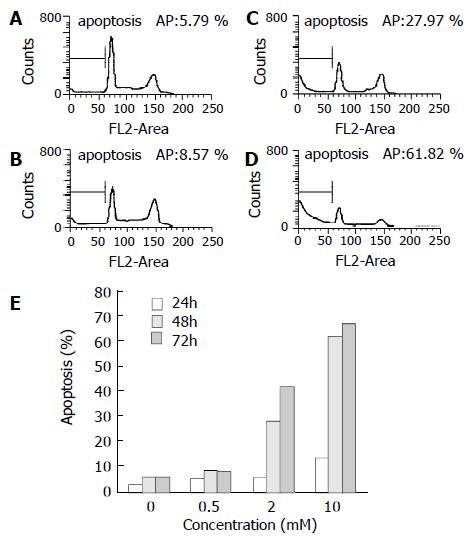 Figure 6 Tributyrin-induced apoptosis in SGC-7901 cells by flow cytometry. (A) The control cells, (B)-(D) The experimental cells treated with tributyrin at 0.5, 2 and 10 mmol·L-1 respectively for 48 h. (E) Apoptosis rates in SGC-7901 cells treated with 0.5, 2 and 10 mmol·L-1 or without tributyrin for the indicated times.
Differential expression of Bcl-2 and Bax protein and PARP cleavage in tributyrin-treated cells

After treated with indicated concentrations of tributyrin for 48 h, the expression of Bcl-2 protein was markedly decreased while that of Bax displayed an increased trend. PARP cleavage in the experimental cells appeared at 0.5 mmol·L-1 and was obvious at 2 mmol·L-1 of tributyrin treatment for 48 h (Figure 7). 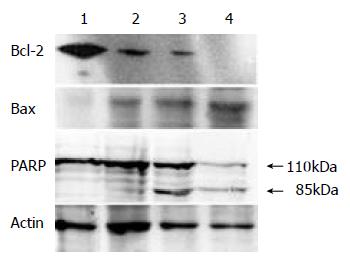 It has been reported tributyrin, a substance that naturally exists in some foods, was a potent agent against various malignancies, including colon and pancreas carcinomas, and that 1 mmol of tributyrin could result in an inhibitory effect comparable with 3 mmol of butyrate[32,33]. The high lipophilic property and the long duration in blood made tributyrin a promising anti-tumor agent. However, the effects of tributyrin on gastric cancer cells have not been reported.

The present study demonstrated that tributyrin could inhibit the growth of human gastric cancer SGC-7901 cells in a dose-and time-dependent manner, which might be caused by DNA synthesis arrest as shown in our experiment via preventing SGC-7901 cells from progressing into S-phase and ultimately blocking the cell proliferation. The inhibition of DNA synthesis was more than 90% when SGC-7901 cells were treated with tributyrin at 2 mmol·L-1 for 48-72 h.

Besides DNA synthesis arrest, the induced cell death was another major reason for the cell growth inhibition. Apoptosis, also called programmed cell death, is a natural process of cell suicide which plays a critical role in the development and homeostasis of metazoans[34,35]. Our results that tributyrin could induce apoptosis in SGC-7901 cells revealed by the typical apoptotic alterations, including the morphological changes by electron microscopy, positive Hoechst-33258 staining, DNA fragmentation by TUNEL assay and apoptotic sub-G1 peak by flow cytometry.

Apoptosis is a complex process regulated by a variety of factors[36-39]. The members of the Bcl-2 family are important regulators in the apoptotic pathway with individual members that can suppress (eg Bcl-2, Bcl-xl) or promote (eg Bax, Bad) apoptosis. As an oncogene-derived protein, Bcl-2 confers a negative control in the pathway of cellular suicide machinery, whereas Bax, a Bcl-2-homologous protein, promotes cell death by competing with Bcl-2. Introduction of Bcl-2 into most eukaryotic cells has been reported to be able to protect the recipient cell from a wide variety of stress applications that lead to cell death[40,41]. In the present study, we observed that the expression of Bcl-2 was reduced and that of Bax was up-regulated, indicating the reduced ratio of Bcl-2/Bax might serve as a mechanism of SGC-7901 cells apoptosis induced by tributyrin. Its subsequent event might be the release of cytochrome c and caspase-3 activation. On the other hand, the cleavage of PARP, one of caspase-3 downstream target[42], was also observed in the experimental SGC-7901 cells with the increase of tributyrin concentrations. However, PARP could also be cleaved through a parallel caspase-3 independent pathway. Therefore, the exact mechanism underlying the apoptosis of SGC-7901 cells needed to be further investigated.

In summary, we have demonstrated that tributyrin, an oral analogue of butyrate, could induce DNA synthesis arrest and apoptosis in human gastric cancer SGC-7901 cells in vitro. The effect was dose- and time-dependent. The apoptotic mechanism of the SGC-7901 cells induced by tributyrin was at least via the reduction of Bcl-2/Bax ratio. These data suggested that further evaluation of tributyrin, a promising anti-tumor agent, for the treatment gastric cancer was warranted.

We thank Dr. Rugang Zhang from Institute of Biochemistry and Cell Biology, Shanghai Institutes for Biological Sciences, Chinese Academy of Sciences, for his helpful suggestion.