AIM: To appraise the correlation of mutation and methylation of hMSH1 with microsatellite instability (MSI) in gastric cancers.

METHODS: Mutation of hMLH1 was detected by Two-dimensional electrophoresis (Two-D) and DNA sequencing; Methylation of hMLH1 promoter was measured with methylation-specific PCR; MSI was analyzed by PCR-based methods.

CONCLUSION: Both mutation and methylation of hMLH1 are involved in the MSI pathway but not related to the LOH pathway in gastric carcinogenesis.

Our previous studies indicated that genetic instability may play an important role in gastric carcinogenesis[1]. There are at least two distinct genetic instabilities in gastric tumorigenesis: one is the chromosomal instability (or suppressor pathway) and the other is microsatellite instability (or MSI pathway). In the former, perhaps including tumors with low-frequency MSI (MSI-L) as well as microsatellite stable (MSS), accumulation of loss of tumor suppressor genes such as p53, Rb, APC, MCC and DCC play an important role in their carcinogenesis; whereas in the latter, consisting of a small subset of gastric cancer with high-frequency MSI (MSI-H), defective repair of mismatched bases results in an increased mutation rate at the nucleotide level, and the consequent widespread MSI[2-4].

Mismatch repair is required for the cell to accurately copy its genome during cellular proliferation. Deficiencies of this system result in mutation rates 100-fold greater than those observed in normal cells[5]. MSI is a hallmark of mismatch repair gene (MMR)-deficient cancers. MSI in tumors from patients with hereditary non-polyposis colorectal cancer (HNPCC) is caused by germline mutations in MMR genes, principally hMSH2 and hMLH1[6-10]. In contrast, somatic mutations in MMR genes are relatively rare in sporadic MSI+ colon cancers[9,11]. Rather, the majority of negative mutation, MSI+ cases involve hypermethylation of the hMLH1 promoter and subsequent lack of expression of hMLH1[12-16]. The details of the mechanisms of this epigenetic gene silencing remain to be elucidated in gastric cancer. The aim of this study was to define the mutation and methylation of hMLH1 in gastric carcinomas with MSI.

Sixty-eight cancer and corresponding normal tissues were obtained from surgically resected gastric carcinoma in our hospital. Each specimen was frozen immediately and stored at -80 °C until analyzed. A 5 µm section was cut from each tissue and stained with hematoxylin/eosin in order to ascertain whether the cancer cells in the tissues were predominant or not. Genomic DNA was isolated by standard proteinase-K digestion and phenol-chloroform extraction protocols. Of the 68 patients with gastric cancer, 45 were men and 23 were women with an age range of 30-76 years (a mean of 56.2 years at diagnosis). None of the patients included in the present series had a family history suggestive of HNPCC or had received chemotherapy or radiation therapy.

Two-dimensional electrophoresis For two-dimensional electrophoresis, the DGGE instrument was from CBS Scientific Co. (Solana Beach, CA. Amplicons from each of the two mu ltiplex reactio ns were mixed and sub jected to electrophoresis in 0.5 × TAE (Tris-Acetate EDTA). A 10% polyacrylamide, 0.75 mm thick slab gel was used, the amplicons were fractionated at 140 V for 7.5 hr at 50 °C. The separation pattern was detected by SYBR green staining and UV-transillumination of the slab gel. The 120-to 420-bp region in the middle of each lane was quickly cut out and applied to a 1 mm thick DGGE gel.

The DGGE gel was prepared as a 1 mm thick slab gel with a 10%-6.5% reverse polyacrylamide gradient containing 25%-70% urea/formamide (UF) and 3%-9% glycerol gradients. Electrophoresis was carried out for 16 hr at 56 °C and 90-110 V. After electrophoresis, the gels were stained with SYBR-green I and II for 30 min. The DGGE band patterns were detected and documented with a gel documentation system (Oncor, Gaithersburg, MD).

Sequence analysis Amplicons were prepared by PCR such that a standard M13 primer site was incorporated at one end. These products were sequenced on an ABI 377 sequencer (Foster City, CA) with kits containing Taq FS DNA polymerase and dye primer technology, as recommended by the manufacturer.

DNA methylation patterns in the CpG islands of hMLH1 gene were determined by Methylation-specific PCR (MSP) as described[18]. The primer sequences of hMLH1 for unmethylated reaction were 5’-TTTTGATGTAGATGTTTTATTAGGGTTGT-3’ (sense) and 5’-ACCACCTCATCATAACTACCCACA-3’ (antisense), and for methylated reaction were 5’-ACGTAGACGTTTTATTAGGGTCGC-3’ (sense) and 5’-CCTCATCGTAACTACCCGCG-3’ (antisense).

MSI analyses included five microsatellite markers: BAT25, BAT26, BAT40, D2S123, and D5S346. PCR was performed as previous described[1]. MSI was defined as the presence of band shift in the tumor DNA that was not present in the corresponding normal DNA. Based on the number of mutated MSI markers in each tumor, carcinomas were characterized as MSI-H if they manifested instability in two or more markers, MSI-L if unstable in only one marker, and MSS if they showed no instability in any marker[19,20].

Chi-square test with Yates’ correction were used. A P value < 0.05 was considered significant.

Alterations of electrophoretic patterns of PCR products of five microsatellite markers were compared between the tumor and the normal DNA in each patient (Figure 1). MSI affecting at least one locus was observed in 17 (25%) of 68 tumors, among which eight (11.8%) were MSI-H, nine (13.2%) were MSI-L, and fifty-one (75%) were MSS.

Mutations and sequence alteration in various exons manifested as the four-spot pattern denoting a heterozygous variant (Figure 2). We found three mutations in 68 (4.4%) gastric cancer by DNA sequencing. Two mutations were caused by a single bp substitution (exon 8 at codon 226, CGG→CTG, Arg→Leu; exon 9 at codon 252, TCA→TTA, Ser→Phe);. One identical change was caused by a 2 bp substitution (exon 12 at codon 409, CAG→CGT, Gln→Arg), which displayed similar DGGE band pattern. A comparison of MSI status with hMLH1 mutation was shown in Table 3. Three hMLH1 mutations were all detected in MSI-H, but no mutation was found in MSI-L or MSS. 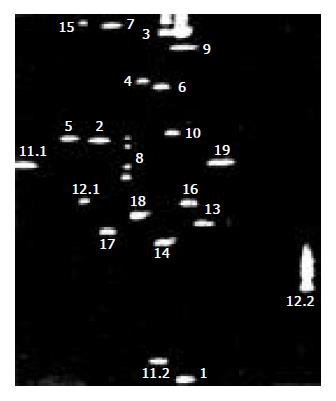 A significant portion of gastric cancers exhibit defective DNA mismatch repair, manifested as MSI. There is now evidence that MSI cancer comprises distinctive MSI-H and MSI-L categories[21-23]. MSI-H cancers are distingushed clinicopathologically and in their spectrum of genetic alterations from cancers showing MSI-L and MSS cancers[24-34]. Our previous studies indicated that MSI-H gastric cancers often showed lower frequency of LOH in APC, MCC and DCC genes than do MSI-L and MSS cancers[1]. In the present study, all three hMLH1 mutations were detected in MSI-H, but no mutation was found in those showing MSI-L or MSS. This result further indicates that hMLH1 is mutational target in MSI-H tumor cells and supported the notion that MIS-H tumors identified an alterative pathway of tumorigenesis that had been proposed by Vogelstein and co-workers[35].

It has been found that colorectal cancer cell lines only had methylated hMLH1 genes, but had absent unmethylated hMLH1 genes[45]. In the present study, unlike the situation with the cell lines, however, the primary MSI+ gastric cancers always had both methylated and nonmethylated hMLH1 genes. It is likely that a significant fraction of the unmethylated genes is derived from the non-neoplastic cells (stromal, inflammatory, vascular, etc.), which are invariably present within the primary tumors but are not found in cultured cell lines. It has been reported that methylation of the hMLH1 promoter correlates with lack of expression of hMLH1 in sporadic colon tumors and mismatch repair-defective human tumor cell lines[13]. whereas demethylation of hMLH1 promoter results in reexpression of hMLH1 in tumor cells tested. Not only was the protein expressed, but MMR activity was restored. DNA methylation is a fundamental feature of the genomes and the control of their functions therefore it is a candidate for pharmacological manipulation that might have important therapeutic advantage.