AIM: To observe the synthesis of endotoxin receptor CD14 protein and its mRNA expression in Kupffer cells (KCs), and evaluate the role of CD14 in the pathogenesis of liver injury in rats with alcohol-induced liver disease (ALD).

METHODS: Twenty-eight Wistar rats were divided into two groups: ethanol-fed group and control group. Ethanol-fed group was fed ethanol (dose of 5-12g·kg·d-1) and control group received dextrose instead of ethanol. Two groups were sacrificed at 4 wk and 8 wk, respectively. KCs were isolated and the synthesis of CD14 protein and its mRNA expression in KCs were determined by flow cytometric analysis (FCM) or the reverse transcription polymerase chain reaction (RT-PCR) analysis. The levels of plasma endotoxin and alanine transaminase (ALT) were measured by Limulus Amebocyte Lysate assay and standard enzymatic procedures respectively, and the levels of plasma tumor necosis factor (TNF)-α and interleukin (IL)-6 were both determined by ELISA. The liver pathology change was observed under light and electric microscopy.

CONCLUSION: Ethanol administration led to a significant synthesis of endotoxin receptor CD14 protein and its gene expression in KCs, which maybe result in the pathological changes of liver tissue and hepatic functional damages.

Our previous studies have shown that the ethanol-fed rats or rats with endotoxemia had higher endotoxin levels in plasma, increased lipopolysaccharide (LPS) receptor CD14 in the liver, and more serious liver injury compared with control rats[1-6]. But it was unclear where CD14 came from. Accordingly, the purpose of this study is to determine whether Kupffer cells (KCs) synthesize CD14 protein and express its mRNA, and evaluate the role of CD14 protein in alcohol-induced liver disease (ALD).

MATERIALS AND METHODS
Animals and treatments

Twenty-eight adult female Wistar rats weighing 180 g to 220 g were fed ad libitum a liquid diet. Animals were divided into two groups: ethanol liquid diet group (ethanol-fed group) and liquid diet group (control group). The rats of ethanol-fed group were fed ethanol, and control group received the same diet but with isocaloric amounts of dextrose instead of ethanol. In ethanol-fed group, the initial dose is 5 g·kg-1·d-1 and the concentration of ethanol within the diet increased up to 12 g·kg-1·d-1 gradually in 8 weeks. All diets were prepared fresh daily. All the animals were anesthetized with sodium pentobarbital (30 mg·kg-1 intraperitoneally) and sacrificed at 4 wk and 8 wk, respectively. Blood was withdrawn from the portal vein and stored at -70 °C before use.

KCs were isolated with the in situ collagenase perfusion technique, modified as described previously[7,8]. In brief, the livers were removed after a portal vein perfusion with Hanks’ balanced salt solution (HBSS) and the homogenate was digested in a solution of 0.5 g·L-1 collagenase (Type IV, Sigma). The digest was washed thoroughly and plated on plastic dishes in RPMI medium containing 50 mL·L-1 fetal calf serum (FCS). After 3 h incubation at 37 °C in O2 and CO2 (0.95/0.05), nonadherent cells were removed with pipet. The adherent cells were collected with a rubber policeman. KCs purity exceeded 90% as assessed by light microscopy, and viability was typically greater than 92% as determined by trypan blue exclusion assay.

Synthesis of CD14 protein in KCs was examined by FCM[2,3]. In brief, KCs were incubated with the anti-CD14 polyclonal antibody (0.1 mg·L-1) for 30 mins after washing, cells were incubated with goat anti-rabbit immunoglobulin G labled with FITC for 30 min, after being washed for three times, and 10000 cells were analyzed by FCM (Coulter, USA). The percentage and mean fluorescence intensity (MFI) of CD14-positive cells were taken as the indexes.

Total RNA was isolated from KCs with the TRIZOL Reagent (Life Technologies, USA). The quality of RNA was controlled by the intactness of ribosomal RNA bands. 0.5 mg of each intact total RNA samples was reverse-transcribed to complementary DNA (cDNA) with the reverse transcription polymerase chain reaction (RT-PCR) kit (Roche, USA). cDNA was stored at -70 °C until polymerase chain reaction (PCR) analysis.

Determination of CD14 mRNA by RT-PCR

The PCR primers used were CD14: sense (5’-CTCAACCTAGAGCCGTTTCT-3’), anti-sense (5’-CAGGATTGTCAGACAGGTCT-3’); β-actin: sense (5’-ACCACAGCTGAGAGGGAAATCG-3’), antisense (5’-AGAGGTCTTTACGGATGTCAACG-3’). The sizes of the amplified PCR products were 267 bp for CD14, and 281 bp for β-actin. The reaction conditions for amplification were as below: denaturation at 93 °C for 1 min, annealing at 57 °C for 2 min, and extension at 71 °C for 1 min for 30 cycles. The PCR products were electrophoresed in 20 g·L-1 agarose gels, and the gels were ethidium bromide stained and video photographed on an ultraviolet transilluminator, and the results were showed with the relative absorbance (Ar: relative optical density, ROD).

To determinate the endotoxin, blood was collected into pyrogen-free tubes containing heparin. Plasma was immediately separated at 4 °C by centrifugation at 200 g for 8 minutes and stored in pyrogen-free tubes at -70 °C. Plasma endotoxin levels were measured within a week using the Limulus Amebocyte Lysate assay. Serum alanine transaminase (ALT) was measured by standard enzymatic procedures.

Bioassay for cytokines production in plasma

The levels of TNF-α and IL-6 in plasma were determined with enzyme-linked immunosorbent assay (ELISA) kits according to the manufacture’s instructions and guidelines (Biosource International, Camarillo, CA).

All results were expressed as -x±sx. Statistical differences between means were determined using Student’s t test. A P value of ≤ 0.05 was considered significant.

RESULTS
Binding of FITC to KCs

To confirm the synthesis of CD14 protein in KCs, we examined the binding of FITC to the cells. The percentages of FITC-CD14 positive cells at 4 wk and 8 wk were 4.45% and 5.38% in control group, respectively. While in ethanol-fed group, the mean fluorescence intensity (MFI) dramatically increased, the numbers of FITC-CD14 positive cells were 76.23% and 89.42% at 4 wk and 8 wk, respectively. There was significant difference when compared to control group (P < 0.05).

Expression of CD14 mRNA in KCs

CD14 mRNA expression in both groups KCs was determined with RT-PCR. In control group, there was no significant expression at the level of CD14 mRNA at 4 wk and 8 wk, respectively. However, it was significantly higher in ethanol-fed rats compared with control group (P < 0.05, Figure 1). 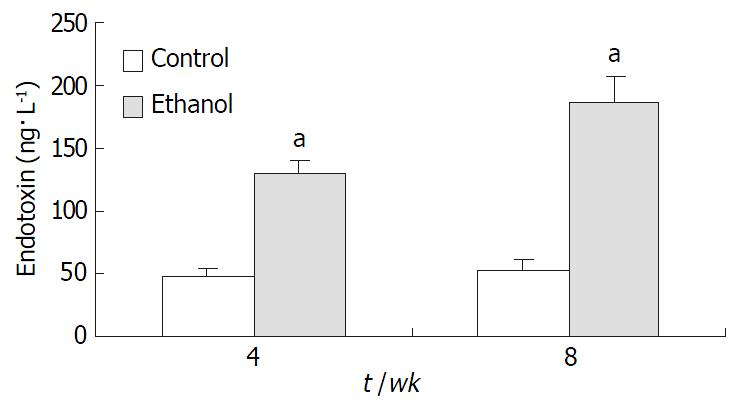 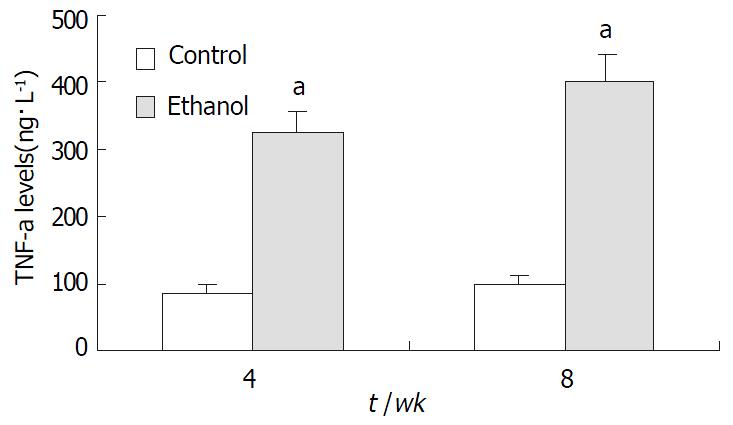 No pathological changes in the liver were observed in the control rats at 4 wk or 8 wk. However, in liver section from rats after 4 wk on ethanol liquid diet, steatosis in both microvesicular and macrovesicular was observed. Few inflammation but accumulation of blood cells in the sinusoidal lining was observed. In liver section from rats after 8 wk on ethanol diet, marked pathological changes (steatosis, cell infiltration and necrosis), KCs proliferation and hypertrophy were detected. Under electron microscopy, huge focal cytoplasmic degeneration and necrosis could be seen in hepatocytes of ethanol-fed rats (Figure 6A). KCs hypertrophy and their surface projections increased as well as, and the phagocytic vacuoles or electron dense phagosomes, Focal cytoplasmic degeneration and many myelin figures in their cytoplasm could also be seen (Figure 6B). 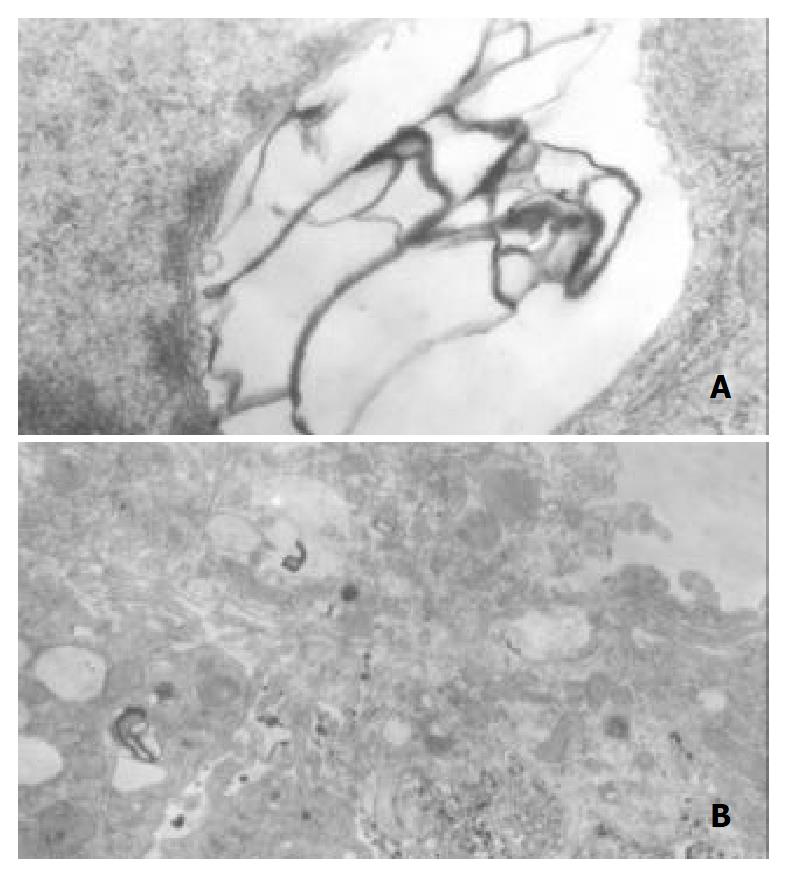 Many studies have documented that liver disease could result from the dose- and time-dependent consumption of alcohol[1,9,10]. However, the mechanisms remain unclear. There appears to be increasing evidences that ethanol toxicity maybe associated with increased levels of endotoxin in plasma[9,11-16]. Endotoxin or LPS is believed to exert many of its effects on the liver injury via interacting with LBP and CD14[17-23]. LBP and CD14 are clearly implicated in the molecular and cellular basis of the interaction between endotoxin and monocytes/macrophages. LBP in serum can recognize and bind LPS to form LPS-LBP complexes and activate cells through CD14 receptor on the membrane of these cells, initiate a process leading to the release of cytokines (e.g., tumor necrosis factor-α and interleukines), prostanoids, and other soluble mediators[9,10,24-29]. The release of these mediators is considered to be an early key step in the pathogenesis of liver disease because they trigger inflammatory events in the liver and alter the parenchymal homeostasis, ultimately initiate liver injury[30-34]. But, it is not clear where CD14 in liver comes from.

The major goal of this study is to observe the synthesis of CD14 protein and its mRNA expression in KCs in ethanol-fed rats and evaluate the its role in ALD. It was found that endotoxin levels in the plasma of rats treated with ethanol were increased significantly when compared with control animals. The increase in CD14 mRNA levels in the ethanol-fed rats is correlated to inflammation degree and necrosis in the liver of these animals, which developed fatty liver, necrosis, and inflammation. Control rats showed no liver pathological changes. In the present study, we found the severity of pathological changes in ethanol-fed rats was accompanied with the increase in CD14 mRNA in KCs and serum ALT. A similar pattern of changes was observed by Yin et al[12]. They found that blood endotoxin and hepatic CD14 mRNA and protein were increased by ethanol. Therefore, the sensitivity (vulnerability) of rat liver to alcohol-induced injury is directly related to CD14 expression in the liver, leading to the increased production of TNF-α, free radicals, interleukins and other cytokines[35-39]. The marked increase in the synthesis of CD14 protein suggests a new mechanism by which alcohol enhanced the LPS-mediated cytokine signaling by the liver macrophages, thus promoting the interaction between alcohol and endotoxins in the development of liver injury[40-43].

It has been well established that the Liver is the main source of acute reaction protein[1-6,8]. However, the mechanism by which the synthesis of CD14 protein and its mRNA expression in the liver increased is thus as yet unclear. It is reported that the synthesis of CD14 protein and its gene expression occurred mainly in monocytes/macrophages, including the cells that reside in the liver (KCs) and these may represent recruitment of inflammatory cells, for example, infiltrating mononuclear cells or macrophages that have high expression of CD14 gene and CD14 protein[44-48]. The increased CD14 protein may promote monocytes/macrophages response to low level of endotoxin, and lead to NF-kB activation and production of pro-inflammatory cytokines, which play an important role in alcoholic liver injury[49-53].

In summary, our results show that ethanol administration led to a significant increase of CD14 protein synthesis and its mRNA expression in KCs when compared with the control rats. The synthesis of CD14 protein and its gene expression may result in greater sensitivity of hepatocytes to endotoxin and lead to the pathological changes of liver tissue and liver functional injury.