AIM: To evaluate the diagnostic efficiency of endoscopic ultrasound (EUS) as the main imaging modality in patients with moderate suspicion of common bile duct stones (CBDS).

METHODS: 55 patients with moderate clinical suspicion of CBDS were prospectively included to the study and evaluated with EUS. This study was done in single blind method in the clinical and biochemical data of patients. EUS was done with echo-endoscope Pentax FG 32-UA (f = 5-7.5 MHz) and Hitachi EUB 405 ultrasound machine. Patients diagnosed with CBDS by EUS were excluded from this study and treated with ERC. All the other patients were included to the follow up study obtained by mail every 6 months for clinical evaluation (need of ERC or surgery).

RESULTS: CBDS was found in 4 patients by EUS. Diagnosis was confirmed in all cases on ERC. The remaining 51 patients without CBDS on EUS were followed up for 6-26 months (meanly 13 months) There were: 40 women, 42 cholecystectomized patients, aged: 55 (mean). Biochemical values (mean values) were as follows: bilirubin: 14.9 μmol·L-1, alkaline phosphatase: 95 IU·L-1, γ-GTP: 131 IU·L-1, ALT: 50 IU·L-1, AST: 49 IU·L-1. Only 1 patient was lost for follow up. In the remaining 50 patients with follow up, there was only 1 (2%) patient with persistent biliary symptoms in whom CBDS was finally diagnosed by ERC with ES. All other patients remained symptoms free on follow up and did not require ERC or biliary surgery.

CONCLUSION: Vast majority of patients with moderate suspicion of CBDS and no stones on EUS with linear array can avoid invasive evaluation of biliary tree with ERC.

Common bile duct stones mostly come from the gallbladder. Spontaneous passage of bile duct stones to the duodenum is quite often. Both facts make the presence of bile duct stones a very dynamic state. Precise diagnosis of presence bile duct stones with the minimal invasive method is eagerly awaited and important for the optimal treatment. The clinical suspicion of choledocholithiasis is often difficult to verify. The “gold standard” for bile duct stones diagnosis is still endoscopic retrograde cholangiography (ERC) with endoscopic sphincterotomy (ES) and surgical choledochotomy with choledochoscopy[1]. Surgical exploration is reserved after failed endoscopic access to the biliary tree. Unfortunately, ERC carries possibility of serious complications. Acute iatrogenic pancreatitis is the most frequent. The need for pre-cut technique during ERC in some patients with difficult access to the papilla exposes the patient to the additional risk of bleeding from the papilla or perforation of the intestine.

According to several authors - sensitivity, specificity and accuracy of EUS with radial scanning transducer in the diagnosis of bile duct stones are almost the same as the ERC and are described between 84%-100%, 76%-100% and 90%-99%, respectively[2-11]. The results of EUS with sector scanning transducer in this setting are similar[12-14]. The sector scanning instruments are cheaper compared with radial scanning instruments. Fine needle aspiration (FNA) monitored under direct ultrasound visual control and Doppler scanning of vessels are additional advantages of sector scanning EUS.

There is only one communication describing the use of EUS (with radial scanning) with intention to replace diagnostic ERC in patients with moderate suspicion of CBDS[15]. This study of Napoleon et al[15] was neither prospective nor controlled study. No data about the implementation of EUS with linear array with such intention exist. Thus, a prospective evaluation of the usefulness of EUS with linear array in the evaluation of patients with moderate suspicion of CBDS with intention to avoid ERC or biliary surgery was undertaken.

Inclusion criteria were as stated as follows: 1. clinical suspicion of bile duct stones - biliary colics at present or during the last 6 months prior to the admission. 2. abnormal results of the following biochemical serum tests (at least two times) - bilirubin, tran saminases, alkaline phosphatase, γ-glutamylotranspeptidase - at present or in the last 6 months. 3. enlarged bile ducts on conventional ultrasound (US) - at present or in the last 6 months. Bile ducts were evaluated as enlarged when the diameter of common bile duct exceeded 7 mm in cases with gallbladder in situ or 9 mm in post - cholecystectomy cases. 4. patient’s data available during follow up (at least 6 months).

In patients enrolled to the study, case history and a set of mentioned above blood biochemical indexes were collected. In following, conventional ultrasound (US) and EUS as initial imaging methods were performed. Examiners (US, EUS) knew nothing of a patient except for that the patient was suspected for bile duct stones.

In the case of CBDS on US and /or EUS, the patient was sent to ERC and excluded from the follow up study (4 cases). In the case of normal appearance of biliary tree on EUS, the decision to abandon ERC was made and the patient was enrolled to the follow up study (51 cases). The follow up program consisted of postal inquires every three months. We asked the following questions: 1. Did you experience any biliary symptoms - postprandial colics in upper right quadrant of the abdomen 2. Did you notice any changes in the colour of stools (whitish stools), urine (dark urine) or skin (jaundice) during or after any colic 3. Did you undergo any investigation in order to evaluate biliary tree (US, ERCP, biliary surgery)

In the case of recurrence of biliary symptoms during follow up, the patient was admitted to our Gastroenterology Department again. ERC was performed on the in-patient basis. Only patients who completed at least 6 months follow up program were finally evaluated (mean follow up time - 13 months). Demographic and clinical data of patients were shown in Table 1, Table 2 and Table 3.

Endoscopic ultrasonography was performed with linear array scanning echoendoscope (Pentax FG 32 UA equipped with HITACHI 405 EUB ultrasonography machine). All EUS procedures were done by the same endosonographer with the experience of 400 EUS examinations (MK). Conscious sedation was achieved with midazolam given intravenously (mean 3,0 mg; range 1-7 mg) in one third patients. In the other two thirds patients midazolam was given orally (7,5 mg) 1,5-2 hours prior to the procedure. Patients were monitored by an anaesthesiologist with the use of ECG monitor and pulsoximetry. Topical pharyngeal anaesthesia with xylocain was used in all patients. EUS was performed with water filling balloon method, starting from the second portion of the duodenum in retrograde direction. EUS was considered positive for the diagnosis of choledocholithiasis if single or multiple hyperechoic structures within biliary tree with acoustic shadowing were found. Patients were diagnosed as stones free in the absence of findings described above. In several cases, antispasmodic agent (Buscopan) was used to control duodenal motility. EUS time was recorded (mean 18 minutes; range 9-37).

EUS was performed successfully with no complications in all 51 cases which were enrolled to the follow up program. Results of EUS showing no stones in the biliary tree in 51 cases could be confirmed in 49 cases during the follow up (96%). The follow up lasted at least 6 months. The mean follow up time was 13 months (range 6-26 months). Only three patients were followed up for 6 months, the remaining cases were followed up longer. One patient was lost for follow up (2% of all cases). Another one patient complained of persistent biliary colics on follow up. He was admitted again 3 moths after his initial evaluation, as he was found to have complaints on the first postal inquiry. No patients with biliary symptoms were revealed during next postal inquires. In the symptomatic patients, ERC was carried out during the second admission and a single 7 mm stone was found in common bile duct (Figure 1). The stone was extracted after endoscopic sphincterotomy and the patient was discharged without complaints 2 days later. 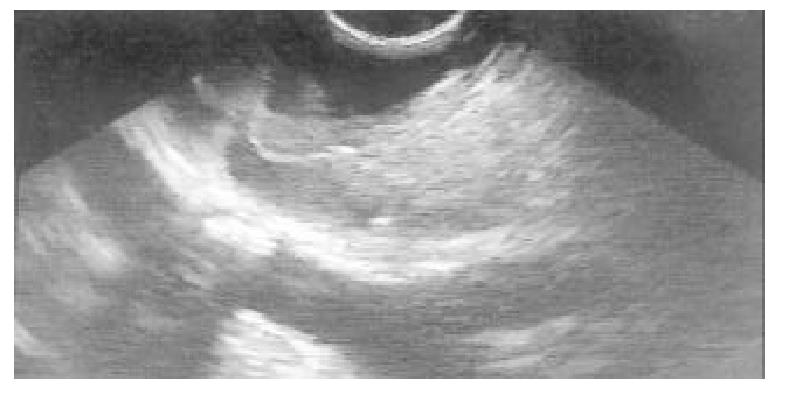 According to Cotton, who classified patients before planned cholecystectomy, one can distinguish three groups of patients with different levels of suspicion of CBDS[16,17]. First group of cases with high risk of CBDS (80%-90%) is characterised by the enlargement over 10 mm of the diameter of common bile duct on US, obstructive jaundice (bilirubin over 20 μmol·L-1 with the elevation of alkaline phosphatase (3 times above upper limit of the normal value) and the history of acute biliary pancreatitis or acute cholangitis in the last few days. ERC with its possibility of therapeutic intervention should be the diagnostic tool of first choice in case of strong suspicion of CBDS[18]. The delay in therapeutic ERC due to the implementation of other imaging tests such EUS, MRI or CT is even unethical in patients with biliary obstruction (cholangitis, acute biliary pancreatitis). However, in case of uncertain reason of obstructive jaundice EUS, MRI or CT can be used to explain the etiology of the jaundice[7]. Second group of patients, classified as the low risk group (approximately 2% of cases have CBDS), consists of patients with no relevant case history, normal biochemical values and no abnormalities of biliary tree on US. Preoperative US and intraoperative cholangiography is proposed as the proper approach to the problem of possible CBDS[16,17]. The third group of patients with moderate risk of CBDS is characterised by suspected (but not documented) acute biliary pancreatitis or obstructive cholangitis in the past, some elevation of alkaline phosphatase level and the diameter of common bile duct between 7 and 10 mm on US.

It is well known that EUS with either radial or sector scanning transducers is a powerful tool in the evaluation of patients suspected for biliary tree lithiasis[2-14]. EUS is as reliable as ERC in the diagnosis of choledocholithiasis.

On the other hand, literatures showing that EUS can really replace ERC in patients with moderate risk of CBDS are curiously few. The only one paper dealing with that problem was appeared in an abstract form only by Napoleon et al[15]. Napoleon at al described the results of a follow up of 238 patients suspected for CBDS and negative EUS (with radial scanning) results. In his group 58 cases were cholecystectomised (24%). Fourteen cases (6%) were lost on follow up (median 490 days). ERC was needed due to persistent biliary symptoms (12%) in 28 cases. However ERC was judged as useful in only 6 cases (3%). One patient with CBDS, three patients with ampullary sclerosis and two cases with biliary tumors were found on ERC[15]. The authors concluded that patients suspected for CBDS and negative EUS had a very low risk to need ERC during follow up. They added that EUS but not ERC was the best imaging method in case of moderate suspicion of CBDS[15].

Our result supported these findings that EUS can be successfully used in older, previously cholecystectomised patients, as our group consisted predominantly of such cases. In conclusion, that EUS with sector scanning transducer (as shown previously for EUS with radial transducers) can be used as the main diagnostic test in patients with moderate risk of CBDS. A large proportion of these patients can avoid ERC or surgical bile ducts exploration in case of negative EUS results.