AIM: To study the role of mitochondrial dysfunction in hydrogen peroxide-induced apoptosis of intestinal epithelial cells.

RESULTS: Percentage of apoptotic cells induced with 400 μmol/L hydrogen peroxide increased significantly at l h or 3 h after stimulation and recovered rapidly. Meanwhile percentage of apoptotic cells induced with 4 mmol/L hydrogen peroxide increased with time. In accordance with these changes, we observed decreased mitochondrial function in 400 μmol/L H2O2-stimualted cells at 1 h or 3 h and in 4 mmol/L H2O2-stimualted cells at times examined. Correspondingly, swelling cristae and vacuole-like mitochondria were noted. Release of cytochrome c, decreased mitochondrial membrane potential and mitochondrial translocation were also found to be the early signs of apoptosis.

Cells were grown on glass cover slips. After treated with 4 mmol/L or 400 μmol/L hydrogen peroxide, samples were fixed in 10% neutral formaldehyde solution for 30 min with PBS rinsing for several times. Then, cells were stained by overnight incubation with 100-fold diluted rabbit anti-human cytochrome c polyclonal antibody (Oncogene) at 4 °C, followed by extensive washing with phosphate-buffered saline and a 30 min incubation with biotin-binding goat anti-rabbit antibody. After another 30 min incubation with horseradish peroxides conjugated ovalbumin, the specimens were colorized and photographed.

Mitochondrial function was assessed by MTT (3, (4,5-dimtthylthiazol- 2-yl) 2, 5-diphenyltetrazolium bromide) assay as described previously[16]. Cells were cultured in 96-well plates 5000 cells for each well at 37 °C in a humidified 5% CO2 incubator. Confluent cells were prepared for further studies. After treated with hydrogen peroxides and washed with phosphate-buffered saline, cells were incubated with MTT (2 μg/ml, Sigma) and RPMI1640 medium without serum at 37 °C for 1 h and dissolved with dimethyl sulphoxide. The absorbance at 570nm, which represented the total mitochondrial function, was recorded.

Cells were grown on glass cover slips. After treated with 4 mmol/L or 400 μmol/L hydrogen peroxide, cells were incubated with Rhodamine 123 (1 μmol/L, Molecular probe) and RPMI1640 medium without serum at 37 °C for 30 min, fluorescence intensity was determined by confocal microscope (Leica) with fixed parameters, cells in three random-selected visual fields from each group were scanned and analysised.

As described previously, cells were seeded in chambered cover slips and preincubated overnight at 37 °C in a humidified 5% CO2 air incubator. After the cells were treated with hydrogen peroxide, mitochondria were stained with Rhodamine 123 for 30 min at 37 °C before analysis. The distribution of mitochondria was analyzed with a Zeiss TSTN confocal microscope[17].

Data were summarized as mean ± SD. Student’s t test was used for multiple comparisons between groups. P values less than 0.05 were considered to be statistically significant.

RESULTS
Effects of hydrogen peroxide on apoptosis of SW-480 cells

DNA ladder in both 4 mmol/L and 400 μmol/L H2O2-stimualted groups were clearly observed by DNA fragmentation assay at 1h or 3h after stimulation (Figure 1). 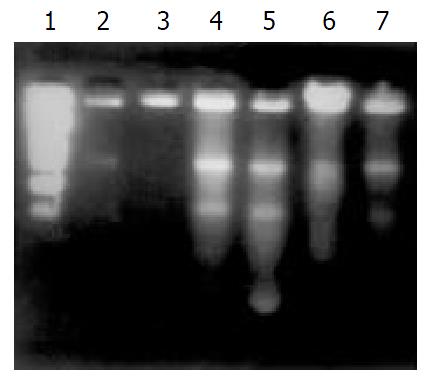 The MTT assay is based on the conversion of MTT (light yellow) to formazan (blue) by the mitochondrial enzyme succinate dehydrogenase and has been widely used as an indicator of cellular respiration and viability[3]. We observed decreased mitochondrial function in 400 μmol/L H2O2-stimualted cells at 1 h or 3 h after stimulation and in 4 mmol/ L H2O2-stimualted cells at times examined (Table 2). Interestingly, these changes were in accordance with the apoptosis induced by hydrogen peroxide.

Mitochondria were observed to be evolved from an originally scattered, bipolar and nearly symmetric distribution to the asymmetric clustered state in the majority of cells treated with H2O2 (Figure 2). 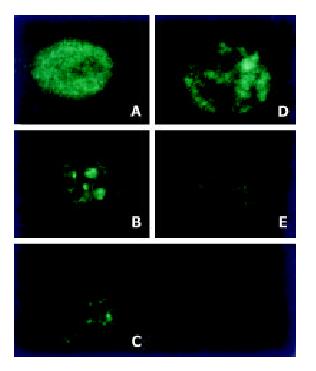 Decreased mitochondrial membrane potential was observed in cells at 3 h after 400 μmol/L H2O2 stimulation and at 1h after 4 mmol/L H2O2 treatment (Figure 3). 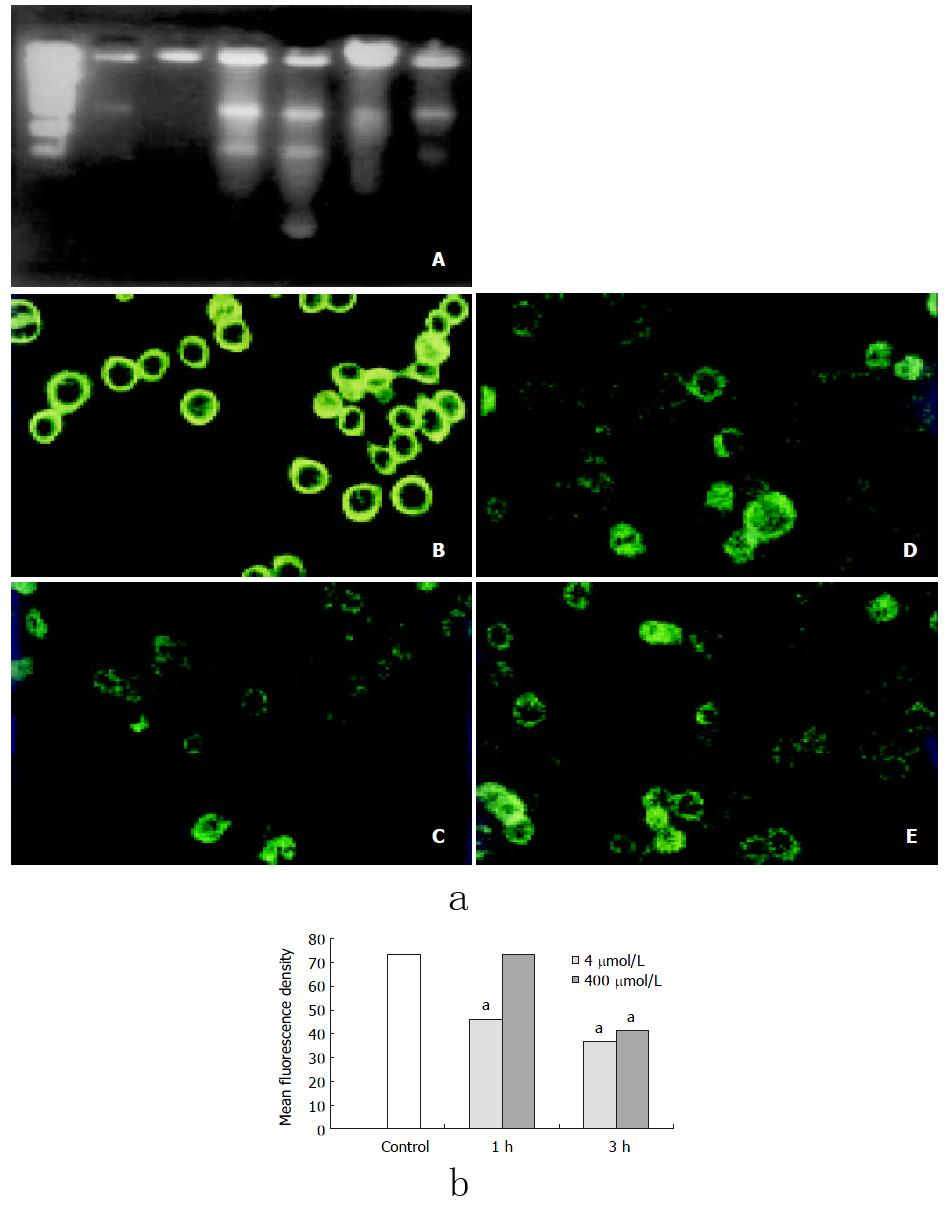 Cytochrome c release could be found in both 400mmol/L and 4mmol/L H2O2-stimualted cells 30 min after stimulation by immunochemistry assay (Figure 4).

Metabolism of intestinal mucosal epithelium is so active that it is very sensitive to changes of energy supplies in normal conditions[11]. Many researches have demonstrated that gut is a sensitive organ to be injured postburn[18-22]. Intestinal mucosal injury can be caused by excessive reactive oxygen species (ROS) released by polymorphonuclear leukocytes and vascular endothelial cells, which is also involved in translocation of intestinal bacteria and its endotoxin.

Role of mitochondria in the pathogenesis of apoptosis has been well defined[23-27]. Mitochondria, a kind of organelle controlling growing, breeding and dying of eukaryocyte, perform their functions by production of ATP, production of ROS, ROS are also known as signals regulating gene expression and triggering of cell death[28,29]. Many stimulators like ROS, Ca2+ and cytokines could activate caspases by inducing cytochrome c release.

Our results showed that the apoptotic cells were characterized with swelling or vacuole-like mitochondria. It was considered previously that the apoptotic cells manifested condensed chromatin but intact mitochondria. Now much more evidences found that significant changes of mitochondria such as swelling, megamitochondria[30], mitochodrial pyknosis and disrupted out-membrane have been taken place in many apoptosis models[31]. Mitochodrial pyknosis was characterized with decreased size and condensed matrix of mitochondria. In apoptotic model of sympathetic neuron triggered by nerve growth factor (NGF) deprivation, the transition from normal to condensed morphology could be reversible following readdition of NGF to the neuron culture[25]. In addition, the mitochondrial distribution within cells was profoundly affected during apoptosis. Mitochondria were normally dispersed throughout the entire cell. However, during the apoptosis triggered by tumor necrosis factor (TNF-α) a perinuclear clustering of mitochondria could be observed. Both mitochondrial condensation and perinuclear clustering occurred following production of the Bcl-2-related proapoptotic protein Bax in many cell types[25].

The mitochondrial transmembrane potential has been found to be decreased in many apoptosis models, which indicates the opening of a large conductance channel known as the mitochondrial PT pore[32-36]. PT pore opening results in a volume dysregulation of mitochondria due to the hyperosmolality of the matrix, which causes the matrix space to be expanded. Because the mitochondrial inner membrane with its folded cristae possesses a larger surface area than the outer membrane, this matrix volume expansion can eventually cause the outer membrane rupture, releasing caspase-activating proteins located within the intermembrane space into the cytosol.

Recent progress in studies on apoptosis has revealed that cytochrome c is a pro-apoptotic factor[39]. It is released from its places on the outer surface of the inner mitochondrial membrane at early steps of apoptosis and, combining with some cytosolic proteins, activates conversion of the latent apoptosis-promoting protease pro-caspase-9 to its active form[39]. Our results also indicated that cytochorme c was released early in hydrogen peroxide-stimulated SW-480 cells.