Article-Type of This Article
H.Pylori

AIM: To explore dysregulation of c-fos in several human malignancies, and to further investigate the role of c-fos in Helicobacter pylori (H. pylori)-induced gastric precancerosis.

METHODS: Four-week-old male Mongolian gerbils were employed in the study. 0.5 mL 1 × 108 cfu·L-1 suspension of H. pylori NCTC 11637 in Brucella broth were inoculated orally into 20 Mongolian gerbils. Another 20 gerbils were inoculated with Brucella broth as controls. 10 of the infected gerbils and 10 of the non-infected control gerbils were sacrificed at 25 and 45 weeks after infection. The stomach of each gerbil was removed and opened for macroscopic observation. The expression of c-fos was analyzed by RT-PCR and immunohistochemical studies in H. pylori-induced gastric precancerosis of Mongolian gerbil. Half of each gastric antrum mucosa was dissected for RNA isolation and RT-PCR. β-actin was used as the housekeeping gene and amplified with c-fos as contrast. PCR products of c-fos were analyzed by gel image system and the level of c-fos was reflected with the ratio of c-fos/β-actin. The immunostaining for c-fos was conducted using monoclonal antibody of c-fos and the StreptAvidin-Biotin-enzyme Complex kit.

RESULTS: H. pylori was constantly found in all infected animals in this study. After infection of H. Pylori for 25 weeks, ulcers were observed in the antral and the body of stomach of 60% infected animals (6/10). Histological examination showed that all animals developed severe inflammation, especially in the area close to ulcers, and multifocal lymphoid follicles appeared in the lamina propria and submucosa. After infection of H. Pylori for 45 weeks, severe atrophic gastritis in all infected animals, intestinal metaplasia in 80% infected animals (8/10) and dysplasia in 60% infected animals (6/10) could be observed. C-fos mRNA levels were significantly higher after infection of H. pylori for 25 weeks (1.84 ± 0.79), and for 45 weeks (1.59 ± 0.37) than those in control-animals (0.74 ± 0.22, P < 0.01). C-fos mRNA levels were increased 2.5-fold by 25th week (P < 0.01) and 2.1-fold by 45th week (P < 0.01) in precancerosis induced by H. pylori, when compared with normal gastric epithelium of Mongolian gerbil. Immunohistochemical staining revealed exclusive nuclear staining of c-fos. Furthermore, there was a sequential increase in c-fos positive cells from normal epithelium to precancerosis.

CONCLUSION: The study suggested that overexpression of c-fos occurs relatively early in gastric tumorigenesis in this precancerosis model induced by H. pylori.

H. pylori, a gram-negative spiral bacterium first isolated in 1982 from a patient with chronic active gastritis, is responsible for a large portion of chronic gastritis and nearly all duodental ulcers, most gastric ulcers, and probably an increased risk of gastric adenocarcinoma[1-9]. More than 50% of the adult population are infected with H. pylori in developing countries as well as in developed countries. Gastric cancer is a major health problem[10] and remains the second most common cancer in the world[11]. Although epidemiological studies have indicated that H. pylori infection plays a crucial role in human gastric carcinogenesis[12-25], there is no direct proof that H. pylori is actually associated with gastric carcinogenesis[26]. The purpose of this study was to elucidate the relationship between H. pylori infection and gastric carcinogenesis by using an animal model of long-term H. pylori infection, and to explore the role played by c-fos in gastric tumorigenesis.

Four-week-old specific pathogen-free male Mongolian gerbils weighing 20 ± 5 g were employed in this study. They were housed in individual metabolic cages in a temperature conditioned room 23 ± 2 °C with a 12 h light-dark cycle, allowed to access to standard rat chow (provided by Experimental Animal Center, First Military Medical University) and water ad labium, and acclimatized to the surrounding for 7 days prior to the experiments. H. pylori (NCTC 11637) was obtained from American Type Culture Collection and cultured on Brucella agar plates containing 70 mL·L-1 goat blood in a microaerobic condition (volume fraction, N2: 85%, O2: 5%, CO2: 10%, in aerobic globe box) at 37 °C for 3 days. The strain was identified by morphology, Gram’s stain, urease production and so on.

0.5 mL 1 × 108 cfu·L-1 suspension of H. pylori NCTC 11637 in Brucella broth were inoculated orally into 20 Mongolian gerbils for 14 days continuously which had been fasted overnight. Another 20 gerbils were inoculated with Brucella broth as controls. 10 of the infected gerbils and 10 of the non-infected control gerbils were sacrificed after infection for 25 and 45 weeks, respectively. The stomach of each animal was removed and opened for macroscopic observation. Half of each gastric antrum mucosa were dissected for RNA isolation. The rest of the stomach samples were used for histological examination, which were fixed with neutral-buffered 100 mL·L-1 formalin and processed by standard methods that embedded in paraffin, sectioned and attained with haematoxylin for analyzing histological changes, Giemsa stain for detecting for H. pylori and Alcian blue (AB)/PAS stain for examining intestinal metaplasia.

Using Tripure isolation reagent (Boehringer Mannheim, Germany), total cellular RNA was isolated from previously frozen tissues according to the manufacturer’s instruction. All RNA samples were analyzed for integrity of 18s and 28s rRNA by ethidium bromide staining of 0.5 μg RNA resolved by electrophoresis on 12 g·L-1 agarose-formaldehyde gels. RT-PCR analysis was performed as follows. RNA was incubated at 60 °C for 10 min and chilled to 4 °C immediately before being reverse transcribed. 1 μg of total RNA was reversely transcripted using antisense primers in a volume of 20 μL for 40 min at 50 °C, containing 200 U MMLV reverse transcriptase, 1×buffer RT, 1 MU·L-1 Rnasin, 0.5 mmol·L-1 dNTPs of dATP, dGTP, dCTP and dTTP and each antisense primers including c-fos and β-actin at 0.2 μmol·L-1. The samples were heated to 99 °C for 5 min to terminate the reverse transcription reaction. By using a Perkin-Elmer DNA Thermocycler 4800 (Perkin-Elmer, Norwalk, CT), 5 μL cDNA mixture obtained from the reverse transcription reaction was then amplified for c-fos and β-actin. β-actin was used as the housekeeping gene and amplified with c-fos as control. The amplification reaction mixture consisted of 10 × buffer 5 μL, 0.2 mmol·L-1 dNTPs of dATP, dGTP, dCTP and dTTP, 2.5 U Taq DNA polymerase, and sense and antisense primers at 0.2 μmol·L-1 in a final volume of 50 μL. The reaction mixture was first heated at 94 °C for 2 min and amplification was carried out for 29 cycles at 94 °C for 0.5 min, 58 °C for 1 min, 70 °C for 1.5 min, followed by an incubation for 7 min at 70 °C. The amplification cycles was previously determined to keep amplification in the linear range to avoid the “plateau effect” associated with increased PCR cycles. The PCR primers were as following: c-fos, sense 5’-CACGACCATGATGTTCTCGG-3’ and antisense 5’-AGTAGATTGGCAATCTCGGT-3’; β-actin, sense 5’-CCAAGGCCAACCGCGAGAAGATGAC-3’ and antisense 5’-AGGGTACATGGTGGTGCCGCCAGAC-3’. PCR products of c-fos and β-actin had 348 bp and 587 bp, respectively. PCR products were run on a 15 g·L-1 agarose gel in 0.5×TBE buffer and then analyzed by gel image analysis system. The level of c-fos was reflected with the ratio of c-fos/β-actin.

Experimental results were analyzed with Chi-square Tests and K-Related Samples Test by SPSS software. Statistical significance was determined at P < 0.05. 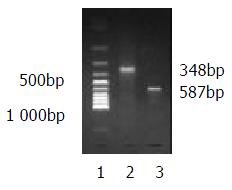 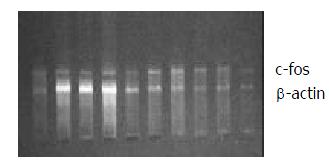 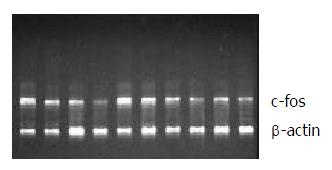 H. pylori infection is now known as a major cause of acute and chronic active gastritis, peptic ulcer disease and atrophic gastritis and is also considered as a risk factor in the incidence of gastric adenocarcinoma and mucosa-associated lymphoma[1-8]. Chronic colonization of the human stomach by the gram-negative spiral bacterium H. pylori is associated with the development of cancer in the distal portion of the stomach. Although there is no direct proof that H. pylori is actually associated with gastric carcinogenesis, epidemiological studies have indicated that H. pylori infection plays an important role in human gastric carcinogenesis. Because of this strong epidemiological association, H. pylori is classified as a definite carcinogen (group I) by the International Agency for Research on Cancer (IRAC), a branch of the World Health Organization (WHO). Many animals infected with human H. pylori have already been studied to determine the pathogenetic background, but none of the models studied mimics human H. pylori infection and subsequent pathology. Recently, two exprements were conducted in Japan that demonstrated that chronic H. pylori-infection models of Mongolian gerbils would develope gastric carcinoma. These results will be extremely helpful to elucidate the mechanism of gastric carcinogenesis due to H. pylori infection[9-26]. Apoptosis, a programmed cell death, was ignored, just like H. pylori, only to reappear recently. However, the number of current publications dealing with apoptosis of H. pylori has increased exponentially. Although gastric epithelial apoptosis is a programmed physiological event in the superficial aspect of the mucosa and is important for healthy cell turnover, H. pylori infection reportedly promotes such a cell death sequence[27,28]. Because apoptosis regulates the cycle of cell turnover in balance with proliferation, dysregulation of apoptosis or proliferation evoked by H. pylori colonization would be linked to the gastric carcinogenesis[29-31].

C-fos is an immediate early response gene, and c-fos protein is an important transcription-factor of nuclei[32-39]. Oncogene c-fos is also a kind of effect protein of the karyomitosis signal, which can trigger and regulate the transcription of the genes related with proliferation. Besides, c-fos can also regulate its own gene expression with a positive feedback and promote the mitosis and proliferation of the cells. Because c-fos can regulate cell proliferation and cell apoptosis, its abnormal expression might induce cell turnover and carcinogenesis[40-46]. Previous studies have showed that the expression of oncogene c-fos is closely related to cellular multiplication and differentiation. The amplification and over-expression of c-fos gene are associated with malignancy and tumorigenecity of cells. Recently, some studies suggested that oncogene c-fos was amplified in the primary tumor DNA[47-49]. Shirin et al[27] tested the hypothess that H. pylori might inhibit cell growth and cell cycle progression by inhibiting signaling pathways that mediate the transactivation of the serum-response element in the c-fos promoter.

In this study, mRNA level of c-fos was measured by quantitative RT-PCR analysis in Mongolian gerbil gastric antrum mucosa to explore dysregulation of c-fos in malignancies and to further investigate the role of c-fos in H. pylori-induced gastric precancerosis. In addition, the expression and localization of its protein product was analyzed by immunohistochemical staining. C-fos mRNA levels were significantly increased in precancerosis induced by H. pylori, when compared with normal gastric epithelium of Mongolian gerbil. Immunohistochemical staining revealed exclusive nuclear staining of c-fos. Furthermore, there was a sequential increase in c-fos positive cells from normal epithelium to precancerosis. This study indicates that the expression of c-fos mRNA and protein is increased from normal epithelium to precancerosis. The dysregulation of c-fos expression occurre relatively early in gastric tumorigenesis in this model and may participate in tumor progression. These findings suggeste that H. pylori- induced gastric precancerosis is associated with dysregulation of gastric epithelial cell cycle. Further studies are needed to delineate the mechanism of those alterations.