AIM: To investigate the expression of human telomerase reverse transcriptase gene (hTRT) in gastric cancer (GC) and its relevance with cell cycle regulators including P16INK4, cyclin and P53.

It has been reported in telomere-telomerase hypothesis that the senescence process of human cell can be divided into two stages, one is the mortality stage 1(M1), another is the mortality stage 2(M2). When telomerase shortens to a critical length 2kb-4kb, the stability of chromosome will be damaged and the cells enter the senescence stage that is M1. At this stage, DNA breaks with activation of P53-dependent or-independent DNA damage pathways, and the DNA damage can also induce products of CDk3 inhibitors such as p21, p27 and lead to the G1 block and eventual death[9]. If certain tumor suppressor genes PRb, P53 or P16 are inactivated and are deprived of normal function, cells will prolong their life span, but usually not to immortalization. Then telomere further decreases to M2 stage. Most cells will die at this stage, but rare cells will survive and become immortalized because of the up-regulation or re-activation of telemerase activity which restores the telomere function and the stability of chromosome[10]. Thus, telomere length and activiation of telomerase closely correlate to life span of cells. Zhu x et al[11] demonstrated that the level of telomerase activity varies with different phases of cell cycle. In this study, we chose hTRT which could represent telomerase activity and markers around the G1/S check point of cell cycle such as P16, cyclinD1, P53 to reveal the interaction between hTRT gene and regulation of cell cycle and to investigate the role of these indexes in the oncogenesis and development of gastric cancer by in situ hybridization method and immunohistochemistry technique.

Tissue spencimens of gastric cancer were obtained from the first affiliated hospital of Anhui Medical University from October 1994 to October 1997. No patient had been treated with anti-neoplasm therapy before surgical removal. 53 patients (42 males, 11 feamles, from 23 to 73 years old, median age 55 years) were as follows: 22 cases of poorly differentiated adenocarcinoma, 26 cases of well differentiated adenocarcinoma (including 18 cases of tubular adenocarcinoma, 8 papillary adenocarcinoma), 5 cases of mucoid carcinoma (including 4 cases of mucinous adeocarcinoma, 1 case of signet-ring cell carcinoma). 53 cases of adjacent cancerous tissues were taken as controls. All specimens were fixed in 10% formalin, embedded in paraffin, cut in serial 4 μm sections and adhered to slides treated by poly-L-Lysine and 0.1% DEPC.

The data was copied down by Excel and analyzed by SPSS version 10.0. The χ2 test or Fisher’s exact test (n < 5) was used for statistical analysis, Spearman rank correlation was performed for correlation analysis. 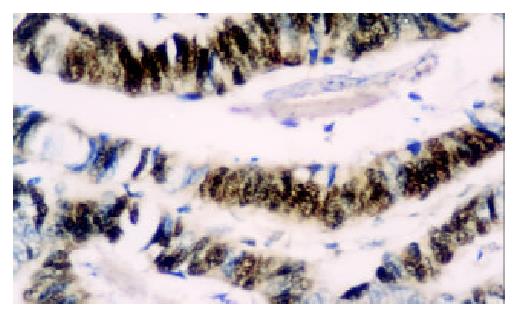 Figure 1 The expression of hTRTmRNA is strongly positive in tubular adenocarcinoma. ISH × 400. 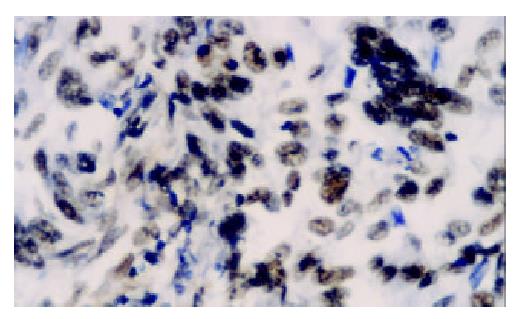 Figure 2 The expression of hTRTmRNA is moderately posi-tive in poorly differentiated adenocarcinoma. ISH × 400. 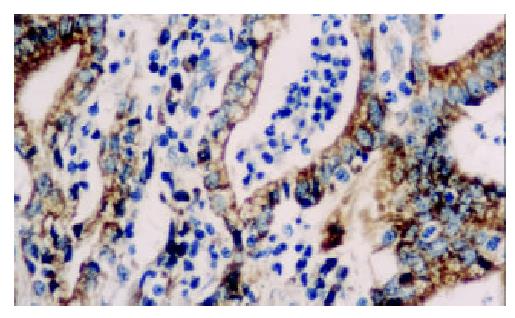 Figure 3 The expression of hTRT protein is strongly positive in papillary adenocarcinoma. S-P × 400. 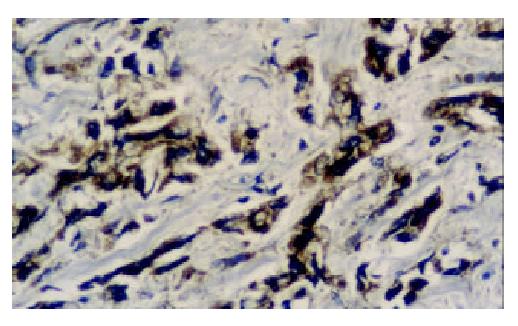 We grouped the 53 cases of cancer patients who had complete clinical data as gender, age, tumor location and size, lymph node metastasis, invasion depth and clinical staging, and found that the expression of hTRTmRNA and its protein in GC was not related with clinicopathological parameters concerned above (Table 3).

Current studies have proposed that activation of telomerase is a critical step in tumorigenesis of gastric cancer. Jong et al[6] observed telomerase activity in 25 of 27 primary GC and found the up-regulation of hTRTmRNA expression in 26 of 26 GC tissues by RT-PCR analysis. Hiyama et al[13] had detected telomerase activity in 66 samples of primary GC and found that the positive percentage was 85%, but 6% in the adjacent cancerous tissues. In our study, we detected the expression of hTRT gene in 53 GC specimens by ISH and immunohistochemistry, and found that positive percentage of hTRTmRNA and hTRT protein was 79.2% and 88.6% respectively in GC, and was 15.1% and 24.5% in the adjacent cancerous tissues. Meanwhile, the index of hTRT could be located for observation and determined semiquantitatively. So it provided an important morphological marker for detection of GC. It is reported that telomerase activity is associated with histological differentiation and malignant grade of tumor[14,15]. However, telomerase activity doesn’t correlate with age, gender, tumor stage and histological differentiation of gastric cancer[16-19]. In our present study of GC, the expression of hTRTmRNA and hTRT protein was not associated with clinicopathological parameters including gender, age, tumor size, location, lymph node metastasis, invasion depth and clinical staging. There was statistical difference of hTRT protein only between mucoid carcinoma and well differentiated adenocarcinoma, poorly differentiated adenocarcinoma, but our cases of mucoid carcinoma were few. Therefore, we considered that the expression of hTRT gene might be associated with gastric carcinogenesis, but not involved in differentiation and biological property of the tumor. Mild expression of hTRTmRNA and hTRT protein in dysplasia and intestinal metaplasia of adjacent cancerous tissues showed that the expression of hTRT gene might be presented in precancerous lesions or diseases, and the positive cells may be precancerous cells, but it was needed to do further studies to demonstrate the precise significance of this phenomenon.

There are several checkpoints of different function during cell cycle including G1/S checkpoint, S checkpoint and G2/M checkpoint. G1/S checkpoint that is the PRb pathway is especially important to ensure completion of cell cycle events on schedule and to prevent abnormal cells from proliferation to carcinogenesis[20]. At the end of G1 stage, cyclinD1 combined with CDK4/6 is responsible for the phosphorylation of PRB to release an important transcription factor -E2F, which initiates DNA synthesis and drives the cells through G1/S checkpoint. There are two vital inhibitory pathways of G1/S checkpoint, one is that P16INK4 competitively combines with CDK4 against cyclinD1 to suppress CDK4 activity[21,22], the other is that P53 initiates P21 gene to express P21 protein combined with cyclinD1/CDK4 and to inhibit the activity of cyclinD1/CDK4 when DNA is damaged[23-29]. The two pathways both abolish phosphorylation of PRb, and cell cycle arrests at G1 phase. It is reported at the M1/M2 model of telomere-telomerase hypothesis that a cell can’t obtain immortality until it passes through M1/M2stage. When the activity of tumor suppressor proteins such as P53, PRb, P16INK4 are absent, the cells can prolong their life by passing through M1 stage, thus there will provide more chances of activating telomerase for those cells to pass through M2 and obtain immortality[30-33].