AIM: To study methylation, frequencies of homozygous deletion and mutation of p16 gene in gastric carcinoma.

RESULTS: Hypermethylation changes in exon 1 and exon 2 of p16 gene were observed in 25% and 45% of 20 gastric cancer tissues, respectively, while no methylation abnormality was found in normal tissues. The homozygous deletion frequency of exon 1 and exon 2 of p16 gene in 20 gastric cancer tissues was 20% and 10%, respectively. No mutation was found in exon 1 of p16 gene, while abnormal single strands were found in 2 (10%) cases in exon 2 as detected by SSCP.

DNA methylation abnormality could influence gene transcription directly, and it could also cause the abnormal gene expression through the C→T mutation induced by deamination of 5’ methyl cytosine (5 mC)[1]. In the eukaryote, 5 mC mainly appears in the CpG sequence of genome, and it is the site in which p16 gene mutation occurr frequently[2]. Highly frequent homozygous deletion, mutation and abnormal methylation of p16 gene exhibit in many kinds of carcinoma[3-9]. In China, studies on p16 gene methylation abnormality and deletion, mutation in gastric carcinoma have scarcely been reported. In this paper, restriction endonuclease-polymerase chain reaction (PCR) and single strand conformation polymorphism (SSCP) techniques were used to detect the CpG methylation and mutation in exon 1 and 2 of p16 gene. The biological siginificance of p16 gene and its methylation abnormality in the development and progress of gastric carcinoma were discussed.

20 specimens of gastric carcinoma and their corresponding adjacent normal-appearing gastric tissue were collected from the First and Second Affiliated Hospital of Medical College of Zhengzhou University and frozen in liquid nitrogen in 30 min. All the specimens were pathologically diagnosed and without radio or chemical therapy before operation. 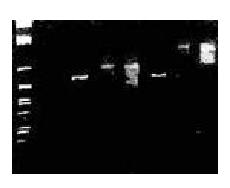 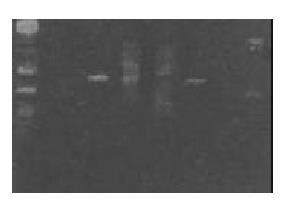 After agarose electrophoresis of PCR products, if no amplified products were found at the sites corresponding to 336bp or 424bp, then homozygous deletion of E1 or E2 could be determined. In gastric carcinoma tissues, 4 cases (20%) of E1 deletion and 2 cases (10%) of E2 deletion were found. The 6 cases with homozygous deletion included 1 with well differentiated and 5 with moderately or poorly differentiated gastric carcinoma tissues (Figure 3 and Figure 4). 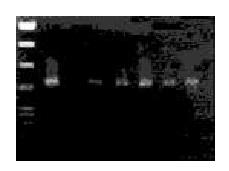 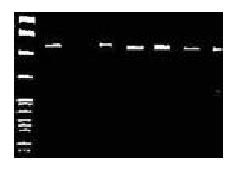 Mobility shift is defined when abnormal bands appear or the position of bands alter. No abnormal alteration was found at E1 of p16 gene (Figure 5). At E2, abnormal single strand of mobility shift exhibited in 2 (10%) cases, in 1 of which (IIIa stage, poorly differentiated adenocarcinoma) mobility shift occurred in both carcinoma and adjacent carcinoma tissues (Figure 6). 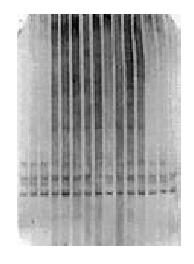 Deletion and mutation of p16 gene

Deletion and mutation of p16 gene are also important mechanisms responsible for the dysfunction of tumor suppressor genes. Abnormality in 9p21-22 of chromosome has been reported in many kinds of carcinoma cells, and p16 gene is an important gene located in this region. By analysis of the sites adjacent to p16 gene, simultaneous mini-deletions ( < 200bp) of p16 allele were found in many carcinomas, and homozygous deletion of p16 gene has been testified in many kinds of primary carcinoma[25-27]. Lu et al[28]. detected that the deletion of E1 of p16 gene in 16.4% of gastric carcinoma tissues, Wu et al[29]. reported a rate of 10% (6/60). Different deletion rates of p16 gene in gastric carcinoma were reported by the other investigators[30-32]. In the present study, deletion of E1 and E2 was detected in 20% and 10%, respectively, of 20 cases gastric carcinoma cases, but amplified products appeared in corresponding normal gastric mucosa tissues.