METHODS: Ten female S-D rats were administrated with liver tissue dot injection of naked PCHO/hVEGF-D, 50 μg/dot, three dots for each. The same amount of physiological saline was used as control in the neighboring lobe. Forteen S-D rats, using inflow occlusion of left lateral lobe, were divided into two groups, seven rats in each group. One was ischemic plasmid group, which received naked plasmid PCHO/hVEGF-D injection of 150 μg. The other received the equal amount of natural saline injection and designed as control. The expressions of hVEGF-D in mRNA and protein levels were identified by in situ hybridyzation and immunohistochemistry, respectively. Endothelial cells were labeled by the factor VIII immunohistochemistrically. The average number of peri-sinusoidal capillaries of each group was calculated and compared statistically 8 d after injection.

CONCLUSION: The naked PCHO/hVEGF-D dot injection to normal, ischemic rat liver can produce comparatively high expression of hVEGF in both protein and mRNA levels, and prominently increase the number of new capillaries around hepatic sinuses. Therefore, it could be another ideal choice for the treatment of ischemic liver diseases.

Nowadays, the liver has become the most important target organ for gene therapy because of its unique structure and complex functions. Owing to its particular situation with respect to the blood circulation, the liver can serve as a secretory organ for the systemic delivery of therapeutic proteins. The liver parenchyma is readily accessible to large molecules such as DNA fragments or recombinant viruses present in the blood on account of its peculiar endothelium. Great progress has been achieved in various gene transfer protocols aimed at delivering genes to the normal or the pathologic liver in the last dacade[1,2].

Angiogenesis is a process of new blood vessel development from pre-existing vasculature. It plays an essential role in embryonic development, normal growth of tissues, wound healing, the female reproductive cycle, as well as a major role in many diseases. One of the most important growth and survival factors for endothelium is vascular endothelial growth factor (VEGF). VEGF induces angiogenesis and endothelial cell proliferation and it plays an important role in regulating vasculogenesis[3-5]. Many previous studies also proved the antiangiogenic effect of VEGF antisense gene therapy for hepatic carcinoma and the killing effect of suppression of VEGF on gastric cancer cells[6,7].

Most of the liver conditions were proved to be involved in the morphological and pathological changes of intra-hepatic vessels[8-11]. Previous studies demonstrated that, when liver under the state of chronic inflammations, chronic necrosis and fibrosis, the density of microvessels were presumed to reduce probably due to the decreased expression of angiogenesis-related growth factors such as VEGF, insulin-like growth factor, and over expression of transforming growth factor beta, platelet-derived growth factor[12-15]. The expression vector for VEGF has been used to treat various ischemic diseases both experimentally and clinically for nearly ten years[16-20].

In order to verify the expression efficiency and angiogenesis effect after administration of expression vector for VEGF-D, we carried out experimental studies on normal and ischemic rat livers.

A 2.0 kb fragment was cut from PCHO/hVEGF-D by restriction enzymes, EcoRI and BamHI , as the probe for this hVEGF-D. The probe was labeled using randomly primed labeling method (Shanghai Sangon Co.Ltd, China).

Studies on normal rat livers 10 healthy female Sprague-Dawley rats, weighing 200-220 g, were bought from the Experimental Animal Center of Tongji Medical University. After anaesthetized by pentobarbital (40 mg·kg-1 intraperitoneally), all the rats were laparotomized and given liver tissue dot injection of naked PCHO/hVEGF-D, 50 μg/dot, three dots for each. The same amount of NS (natural saline) was used as self-control in the neighboring lobe.

Study on ischemic rat liver Forteen S-D rats, using inflow occlusion of left lateral lobe, were divided equally into two groups. One is study group, each received naked plasmid PCHO/hVEGF-D injection in the amount of 150 μg by dot injection as above. The other group received the equal amount of natural saline injection for each and designed as control.

All the rats were sacrificed 8 d after the operation and liver samples with injection were collected and fixed in 10% neutral-buffered formalin, embedded in paraffin and cut into 4-6 μm sections.

The sections were deparaffinized, rehydrated, and treated with anti-VEGF antibody (Santa Cruz, Britain) and Factor VIII related antibody (Zymed, USA), their proteins were identified according to the instructions of SABC kit (Zhongshan Bio. Co. Beijing, China).

Positive rate was evaluated by Integral Score method from three aspects: Positive cell distribution, intensity and pattern, as reported before[21]. The positive integral scores of VEGF protein were compared between plasmid group and controls, ischemic group and ischemic controls.

The investigation procedure was referred to related references[22]. The in situ hybridization kit was purchased from Boshide Biological Technology Limited Company (Wuhan, China,). In situ hybidization was performed according to the manufacturer's instructions.

Student's t test was used for comparison of results among different groups. Values were expressed as means ± SD. A P value of less than 0.05 was considered statistically significant.

A large amount of hVEGF-D mRNA was identified in plasmid group but none in control group. The hVEGF-D mRNA was located in the cytoplasm of hepatocytes, vascular endothelium, and some Kupffer cells. In the areas around vessels, there were relative more positive cells.

The protein of hVEGF was expressed in cytoplasm mainly in hepatocytes and some endothelial cells in both plasmid and control groups. The stain integral scores of plasmid group and control were 6.0 ± 1.63 and 3.7 ± 2.31 respectively. The difference between the two groups was significant (Student t test, T = 2.74 > 2.62, P < 0.05) (Figure 1). 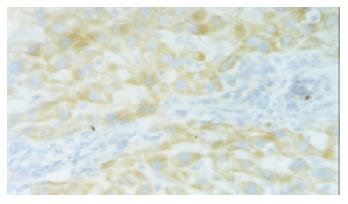 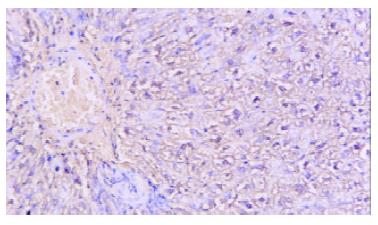 The mRNA of hVEGF-D was found in the study group, but none in the control. The positive cells and location were similar to the normal rat liver studies. 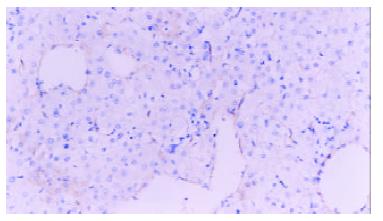 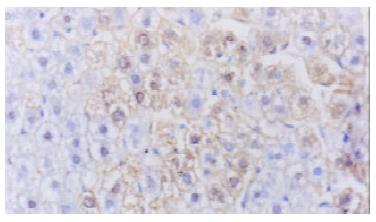 VEGF-D (also known as c-fos-induced growth factor or FIGF) was first cloned by Yamada in 1997 from human lung cDNA library[23]. It is 2028bp long and encodes for 354 amino acid most closely related to VEGF-C[23]. It shares structural homology and receptor specificity with VEGF-C, suggesting that VEGF-C and VEGF-D represent a subfamily of the VEGFs. VEGF-D is initially synthesized as a precursor protein containing unique N- and C-terminal propeptides in addition to a central receptor-binding VEGF homology domain (VHD). Similar to VEGF-C, VEGF-D binds, the cell surface receptor tyrosine kinases VEGF receptor 2 (VEGF R2/Flk-1/KDR) and VEGF R3 (Flt-4). VEGF R2 and VEGF R3 were localized in vascular and lymphatic endothelial cells and signal for angiogenesis and lymphangiogenesis[24]. The gene for VEGF-D maps existed in the chromosome XP22.31 in human[23].

Numerous techniques and approaches have been investigated for gene transfer to the liver. For the gene therapy of hepatic diseases in animal experiments, exogenous genes were usually delivered to the liver through the portal vein, bile duct injection and by direct liver injection[25-30]. The most simple is direct DNA injection. More than 20 years ago, studies pioneered the use of DNA, either naked and complexed with calcium phosphate, for gene transfer to various organs including the liver[31]. Dr. M Anner Hickman presented studies on the direct injection of plasmid DNA, which resulted in significant gene expression in the liver. The cats injected with a plasmid for a reporter gene were noted to exhibit peak expression of the gene 24-48 h after intrahepatic injection. Residual reporter gene expression could be noted up to 6 wk later[32]. In our studies, 8 d after gene PCHO/hVEGF-D injection, VEGF proteins were markedly expressed in liver tissues.

The PCHO/hVEGF-D was specifically designed for mammal expression. It not only cloned the full length of VEGF-D cDNA, but also inserted a special promoter Efalpha. Therefore, it could have a relatively high expression efficiency. In our first part of studies, we tried to ascertain its expression efficiency in vivo with naked gene transfer. The result was the same as we anticipated, and the microvessel density of the injected tissue was promoted as an effect of VEGF protein.

Early in 1999, Marconcini L reported that Figf/Vegf-D was a potent angiogenic factor in rabbit cornea in vivo in a dose-dependent manner. In vitro Figf/Vegf-D induced tyrosine phosphorylation of VEGFR-2 and VEGFR-3 in primary human umbilical cord vein endothelial cells (HUVECs) and in an immortal cell line derived from Kaposi's sarcoma lesion (KS-IMM). The treatment of HUVECs with Figf/Vegf-D induced dose-dependent cell growth[33]. Recently Byzova TV demonstrated in vitro that VEGF-D Delta N Delta C encoded by the adenovirus (Ad-VEGF-D Delta N Delta C) was capable of inducing endothelial cell proliferation and migration and that the latter response was primarily mediated by VEGF receptor-2. The proangiogenic effect of Ad-VEGF-D Delta N Delta C was evident as early as 5 d after injection into the rat cremaster muscle[17].

From our studies in ischemic livers, naked plasmid PCHO/hVEGF-D direct injection could also produce a comparatively high expression of hVEGF in both protein and mRNA levels, and prominently increased the number of new capillaries around hepatic sinuses.

In fact, absolute and relative ischemia of hepatic cells are very common in various situations such as chronic hepatitis, liver fibrosis or cirrhosis and portal thrombosis. Lots of previous studies on liver cirrhosis had already proved that the expression of VEGF was reduced and closely related to the state of liver function or portal hypertension degree[9,10,12-15,34,35]. Assy N studied the serum VEGF levels between cirrhotic patients and normal controls. The results showed that the mean serum VEGF levels in all cirrhotic patients were significantly lower than those of healthy controls and acute hepatitis. These studies give much support for the angiogenesis treatment in chronic liver diseases[12]. Therapeutic angiogenesis has already widely used to treat many ischemic diseases[16,18-20]. By stimulating angiogenesis in liver by gene transfer method, hepatocytes would have more nutrition and oxygen and thus could preserve the liver function to some extent. Therefore, angiogenesis through gene transfer, by naked plasmid DNA PCHO/hVEGF-D injection, is a ideal method for the treatment of ischemic liver diseases especially for liver fibrosis and cirrhosis.