AIM: To evaluate the role of preoperative angiography in the diagnosis and treatment of colorectal cancer.

METHODS: The authors performed selective arterial cannulation by Seldinger's method in 47 patients to locate the primary cancer and to diagnose metastasis to the liver. Each patient was then given intra-arterial regional chemotherapy, and received 5-fluorouracil (5-Fu, 1000 mg), mitomycin C (MMC, 20 mg), and cisplatinum (CDDP, 80 mg).

RESULTS: The location and shape of each tumor were observed, including metastatic tumors in the liver, in 42 of the 47 (89.4%) patients. The site of the primary tumor was difficult to identify in 5 cases because the patients had a recurrence of cancer. Arterial chemotherapy was performed successfully in all patients. The authors recorded no partial or significant morbidity resulted from angiography. The only incident was bleeding from the artery puncture site in one patient, which was successfully stopped by general medication.

CONCLUSION: Preoperative selective arterial angiography can help the diagnosis and locate primary tumors and to detect liver metastasis. At the same time, regional arterial chemotherapy can be an important form of preoperative therapy.

Colorectal cancer is one of the three leading causes of worldwide cancer mortality[1]. It is the second leading cause of cancer-related deaths in the Western world[2]. Because of changes in life style and nutritional habits, the incidence of colorectal cancer is increasing in China. From 1972-1989, the incidence of colorectal cancer increased 85% in men and 79% in women. The average rate of increase in incidence was 4.2% per year since 1970's. Of all cancers in China, colorectal cancer ranks the fifth in incidence. Although 80% of patients initially can have the primary tumor completely resected, the cancer invades the serosa or involves the regional lymph nodes in almost half of patients, predisposing them to a high risk of recurrence[3]. Recurrent cancer of the large intestine is second in cancer-related deaths only to lung cancer[4,5].

Colorectal cancers are detected mainly by endoscopic and radiological examination. However, endoscopy is unsuccessful in some patients who have a low tolerance for the procedure and in patients, especially elderly ones, who are physically unable to undergo a barium enema. In the United Kingdom a complete colonoscopic examination to the caecum is achieved in only 70% of cases[6].

Between Jan.1997 and Jan 1999, we enrolled in this study 47 consecutive patients (25 men, 22 women, age range, 37-81) with histologically or clinically proven colorectal cancer. All patients had normal cardiopulmonary, renal, and hepatic function. In addition, no patient had evidence of coagulopathy or had been previously treated with chemotherapy or any other anti-cancer treatment. Carcinoma was located in the rectum in 26 patients, in the sigmoid colon in 10, in the ascending colon in 7, in the descending colon in 1 and in the transverse colon in 3. Of the 47 tumors, 6 were classified on histologic study as mucinous adenocarcinoma and 41 were adenocarcinoma, of which 3 were poorly differentiated, 31 moderately to well differentiated, and 7 well differentiated. No case was defined as Dukes's stage A; 3 were stage B1, 26 were stage B2, 13 were stage C, and 5 were stage D. Acute obstruction of the colon was seen in 6 patients, and 7 cases were postoperative recurrent tumor. In this group, 3 cases were colorectal cancer with hepatic metastases.

The groin was sterilized and prepared with local anesthesia. The abdominal aorta was catheterized through the femoral artery by Seldinger's method[8].

When these arteries could not be located, we placed the catheter into the superior mesenteric artery for the right half of the colon and the inferior mesenteric artery for the left half of the colon. Digital subtraction angiography (PHILIP INTEGERIS V 3000, PHILIPS LTD, Holland) and the use of contrast dye of Ultravist 370 yielded a “Tumor flush” caused by the abnormal capillary mass of the tumor, which gave the exact location of the tumor. Then we infused chemotherapeutic agents into the tumor through the same artery; each patient received 5-fluorouracil (5-Fu 1000 mg), mitomycin C (MMC, 20 mg), and cisplatinum (CDDP, 80 mg).

Both the hepatic and superior rectal arteries were cannulated in one patient who had rectal cancer with multiple liver metastases.

We performed a digital subtraction angiography procedure (DSA) in 47 patients with colorectal cancer. We were able to locate the exact tumor site in 42 of 47 (89.4%) angiographic studies, including six patients with acute obstruction of the colon (Figure 1, Figure 2, Figure 3). The location of the primary tumor was difficult to identify in 5 cases because the patients had a recurrence of cancer and liver metastases that were found at the same time of the DSA during angiography. Regional chemotherapy for primary colorectal cancer was successfully completed in 47 patients, and 3 patients received chemotherapy for metastatic tumors in the liver at the same time (Figure 4). 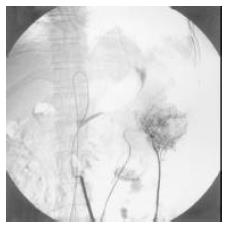 Figure 1 Detection of the tumor site by angiography. Carcinoma of the descending colon can be visualized. 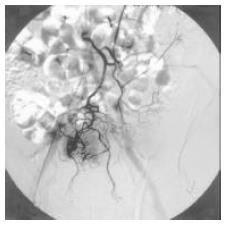 Figure 2 Detection of a tumor in the rectum by angiography. 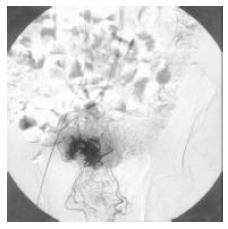 Figure 3 Angiography showing the tumor site in a patient with rectal carcinoma associated with liver metastasis. 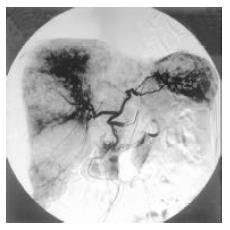 In patients with symptoms of colorectal cancer, flexible colonoscopy or barium enema are usually performed, for definitive diagnosis. Cathartics are usually necessary to prepare for the barium enema. However, if plain radiographs of the abdomen show a dilated colon and acute colonic obstruction is suspected, a barium enema (or water-soluble contract study) may be obtained without preparation to define the location and nature of the obstructing lesion. Some patients, especially older patients, are not able to finish rolling on the table during the examination. Although flexible colonscopy is the most accurate and complete examination for the large bowel, some patients cannot tolerate the procedure. In addition, technical limitations, such as the inability to evaluate the splenic or hepatic flexures or the cecum, compromise the diagnostic usefulness of colonoscopy. Furthermore, colonoscopy is contraindicated in patients with suspected perforation or obstruction of the large bowel[10,11]. Angiography is a safe and accurate technique for localizing acute gastrointestinal hemorrhage[12]. Since 1996, we have used angiography to diagnose colorectal cancer and to deliver regional chemotherapy[13,14]. Our rate of locating tumors with is 89.4%, and we have simultaneously detected cases of colorectal cancer with metastatic liver tumors using angiography. During this procedure, patients have been able to lie comfortably on the table, even those in pain with an acute bowel obstruction induced by colorectal cancer. We had difficulty to find the site of the tumor of recurrent colorectal cancer by angiography because the vessels supplied the tumor had been ligated during the last operation. Regional chemotherapy has been widely used to treat solid tumors[15,16]. The rationale for arterial chemotherapy is that arterial administration allows for high local levels of the drug without corresponding systemic toxicity[17-20]. After intraarterial infusion of 5-Fu, drug levels at the tumor site has been reported to be 9-to 69-fold higher than those obtained during intravenous administration[21]. Few studies have been published on intraarterial chemotherapy in primary colorectal cancer. In our study, chemotherapeutic agents were infused after angiography into vessels supplying the colorectal cancer. As we were reporting short-term results (less than 3 years), we did not see a statistical survival benefit in this study.

Distant metastases develop in 10%-15% of patients despite complete resection of the primary colorectal tumor[22]. Colorectal cancer commonly metastasizes through lymphatic pathways and portal venous vessels to the liver[23-25]. Thus, hepatic arterial chemotherapy is an attractive treatment option for bilobar non-resectable liver metastases in patients in whom the liver is the sole site of distant disease and recurrence[26-31]. Furthermore, angioigraphy and intra-hepatic artery infusion chemotherapy may be used simultaneously we make it possible to be finished at the same period.

Local recurrence and distant metastasis are the most common reasons for treatment failure after surgical resection for colorectal cancer. Local recurrence of rectal cancer, with extension through the wall and with regional lymph node involvement, occurs in 50% of patients. In patients with unresectable lesions, pain and organ obstruction are distressing and potentially devastating symptoms[32]. It was reported that intraarterial infusion of 5-Fu and MMC by percutaneous placement of an infusion catheter in the bilateral internal iliac arteries relieved the pain in 50% of patients with unresectable, recurrent rectal cancer[33]. In our study, one patient with recurrent cancer having severe pelvic pain underwent angiography for diagnosis and then received intraarterial chemotherapy in the bilateral internal iliac arteries. After treatment, the pain was relieved, and the bowels were more easily evacuated. We are not sure of the mechanism underlying these treatment effects.