AIM: To study the influence of chemotherapy on proliferation activation of tumor cell by observing the change of chemiluminescence (CL) and cell cycle in various tumor cell lines after mitomycin C treated.

METHODS: BGC823 and LoVo cell lines were all cultured in RPMI-1640, and then were adjusted to a concentration of 1 × 105 cells/mL in fresh media and incubated for 24 h. Mitomycin C (100 ng·L-1) was added to each bottle. All indeses were examined after 24 h. No Mitomycin C was added in control group. Each group contained 8 samples. Flow cytometric analysis and luminol-dependent CL were used to investigate the effect of mitomycin C on two gastrointestinal carcinoma cell lines.

Media was removed and cells were washed in phenol red free D-Hank's solution three times and adjusted to a concentration of 1 × 103 cells·mL-1 in the same solution. Aliquots (0.1 ml) of this cell suspension were placed into a cuvette, to which 0.7 mL of phenol red free D-Hank's solution and 0.1 mL of luminol (1 mmol·L-1) were added. All cuvettes were put into sample chamber of SHG-1 bio-luminometer (Shangli measure instrument factory). CL of tumor cell was measured using T-2 procedure, configuring measure times were 30 and interval was 60 s. At first background of CL was measured, then 0.1 mL of phaseolus vulgaris agglutinin (PHA, 4 mg·L-1) was added and shaken up rapidly. CL PHA stimulated was measured continuously for about 30 min. All assays were made at 37 °C. After measurements completed, CL kinetics curve, peak value, peak time, slope function and integral were calculated using the computer. Unit of intension of CL was scintillation counting per minute[9] (Figure 1). 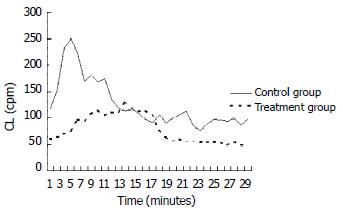 Cells were harvested and washed in D-Hank's solution three times and adjusted to a concentration of 1 × 106 cells·L-1 in the same solution. The nuclei were stained with propidium iodide at a concentration of 50 μg·L-1 and then filtered through 40 μm nylon mesh before flow cytometric analysis[10]. The nuclear DNA content was analyzed with a flow cytometer (Epics XL; Coulter Co. U.S.A); 1 × 106 cells were examined in each sample. The cell cycle distribution, i.e., G0/G1, S, G2/M were analyzed using a computer program (Multicycle). The mean coefficient of variation (CV) for the G0/G1 peak was less than 8.0 in all cases[11]. We assessed the proliferation index (PI) to evaluate the changes of cell cycle distribution caused by treatment of MMC.

We used the fraction of subdiploid peak in front of DNA histograms as apoptotic fraction[12].

Figure 1 and Table 1 show the time-course of CL change in control and treatment groups of BGC823. In control group a CL signal was noted almost immediately that peaked within 3-5 min and returned to baseline after about 10-15 min. In contrast treatment group cells responded slowly and the peak CL did not occur until after 11-18 min. The CL peak value in treatment group decreased significantly (P < 0.01) when compared with control group. The same changes were detected in all two cell lines. 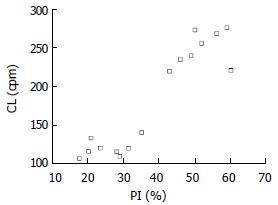 Figure 2 Correlations between CL and PI in BGC823. 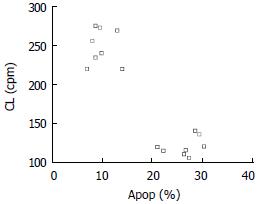 Figure 3 Correlations between CL and apoptotic fraction in BGC823. 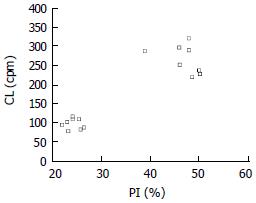 Figure 4 Correlations between CL and PI in LoVo. 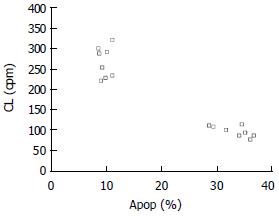 Figure 5 Correlations between CL and apoptotic fraction in LoVo.
DISCUSSION

Oxygen radicals (OR) are intermediary products in the biochemical metabolization of cells, including O2.- H2O2, OH·, 1O2, OCl- and lipid peroxidation oxygen radical[13]. They are produced mainly by aerobic respiration in mitochondrion and glycolysis[14,15]. OR reacts to excitable substance in cells and produces CL[16]. So we can observe activation of cells by the measurement of CL[17,18].

In the present study, luminol-dependent chemiluminescence was used as a measure of CL of human gastric carcinoma cell line BGC823 and human colonic carcinoma cell line LoVo. We discovered that the ground CL intensions of two cell lines were not high but increased rapidly after stimulation of PHA. The CL peak ranged from 4-5 min, then decreased gradually. The results were not reported before.

Mitomycin C is a cycle-nonspecific anti-tumor agent. The mechanism of anti-cancer effect is its alkylation which makes DNA incorporation and DNA replication inhibition and single strand rupture. MMC affects mainly G1 and early S phases. However the influence of MMC on cell cycle in vitro may be different in different cells[19-22]. MMC also up-regulated EpCAM and LewisY antigen expression in LoVo cell line[23]. Cell cultures were growth arrested by exposure for 5 min to MMC[24], and MMC retains its antiproliferative effect for at least 6 wk[25].

The CL of BGC823 and LoVo cell lines were decreased significantly after incubated with MMC for 24 h. We also discovered that the peak of CL was postponed significantly and the peak intension of CL was reduced significantly after the stimulation of PHA. At the same time, the proliferation index (PI) was decreased significantly and apoptotic fractions changed by contraries[26]. There was positive correlation between CL and PI, and there was negative correlation between CL and apoptotic fraction. These results revealed that the proliferation activation of tumor cell reduced, the apoptosis of cells increased and the reaction to stimulation of PHA weakened when the concentration of oxygen radicals in tumor cell decreased[27-29]. So the decrease of concentration of oxygen radicals in low range depressed the mitochysis of tumor cell[30] and prompted the apoptosis of tumor cell. These results also suggest the CL of cell can reflect change of proliferation activation of tumor cell treated by chemotherapy drugs.