METHODS: Revised immunoelectron microscopic technique was used to detect the G cells and D cells in rat antral mucosa through gastrin and somatostatin antibodies labeled by colloidal gold. Also the relevant quantitative analysis regarding the granular number of colloidal gold in G cells and in D cells was conducted.

RESULTS: Immunological granules of colloidal gold were distributed in G cells and D cells. Gastrin labeled golden granules or somatostatin labeled ones presented mainly as lobation-like or island-like congeries. Most of the golden congeries were observed dissociated in cytoplasms of G cells or D cells, near the basement membrane. A few golden congeries were located in nuclei. The number of golden granules in one G cell was around 107.04 ± 19.68 and was 83.36 ± 17.58 in one D cell.

Gastrointestinal hormones such as gastrin and somatostatin, regulate the secretion, motility, absorption, blood flow and cell nutrition of the digestive tract. Abnormality of their secretion often affects the normal functions of digestive tract, even cause clinical symptoms or syndromes. Pathological impairment of gastrointestinal tract could also result in changes of the level of gastrointestinal hormones. Gastrin is mainly secreted from gastrin secreting cells (G cells) in antrum mucosa or upper small intestine. Medulla oblongata and dorsal nuclei of vagus nerve in central nervous system also have gastrin. Somatostatin is distributed in the body, hypothalamus and at other sites of the brain, peripheral nerve and gastrointestinal tract. In digestive system, for example, somatostatin is secreted from somatostatin secreting cells (D cells). D cells are distributed mainly in intestinal nerve plexus, stomach and pancreas[1-4].

Seven healthy male Wistar rats weighing 230-250 g from the Center of Experimental Animals in Sun Yat-sen University of Medical Sciences (Guangzhou, China) were used. All rats received no special treatment before sacrificed. The rats were fasted overnight with free access to water. Four days later, the rat’s abdomen, anesthetized with 3% of sodium pentobarbital intraperitoneally at a dosage of 30 mg/kg, was cut open and its stomach was split from the greater curvature. The antral tissue of about 0.5 mm×0.5 mm was separated using ophthalmic scissors. Then the specimens were immersed into a mixture of 0.1% glutaraldehyde and 3% paraformaldehyde in 0.1M PBS, pH7.4, for 2 hr at room temperature for fixation.

Two hours after fixation, the antral tissue specimens were washed four times for 15 min in 0.1M PBS, pH7.4, and then postfixed for 1 hr in solution of 1% osmium tetroxide (1% potassium dichromate, pH 7.2, 1% osmium tetroxide, 0.85% NaC1) at room temperature. The specimens were washed three times for 10 min in 0.1M PBS, pH7.4, and dehydrated at room temperature in 50% acetone (15 min), 70% acetone (15 min), 90% acetone (15 min), and 100% acetone (three times for 15 min each). The specimens were then infused in an open desiccator containing 50% acetone: 50% Spurr resin (1 hr), 33% acetone: 67% Spurr resin (2 hr), and 100% Spurr resin overnight. When the resin was infused in the specimens, it was polymerized at 40 °C for 4 days. To orientate the samples, 1 μm thick sections were cut, put on an objective glass, and stained with 0.1% teluidin blue. Appropriate regions were chosen, and the pyramids were further trimmed, cut on a Leica Rechert ultramicrotome into 60-80 nm ultrathin sections, put onto 300 nickle mesh grids. All ultrathin sections were divided into G cells group, D cells group, and control group.

A total of 50 cells in either G cells group or D cells group were randomly photographed from sections of their photos. They were input into the Quantimet-500 image analysis system (Leica Co. German) for calculation of the average number of colloidal gold granules. The data thus obtained were expressed in -x±s.

No immunological granules of colloidal gold in most antral mucosa cells were found, except those in G cells. Immunological granules of colloidal gold were well distributed in G cells, with the cells’ ultrastructure clearly fixed. While the membrane of G cells was intact, rough endoplasmic reticules were increased, and mitochondria decreased. The nuclei of G cells were normal, and the chromatin was equally distributed. The gastrin labeled golden granules in G cells were clear, either round-shaped or oval-shaped, with a high electro-density. The granules presented mainly as lobation-like or island-like congeries, which were dispersed in cytoplasms of G cells, directing toward the basement membrane. A few golden congeries in the nuclei of G cells were mainly located in euchromatin area. No golden congeries were observed in heterochromatin area. There were immunological granules of colloidal gold in the nuclei of G cells as island-like congeries and penetrating nuclear pore in cytoplasms (Figure 1). The number of golden granules in a G cell was 107.04 ± 19.68. 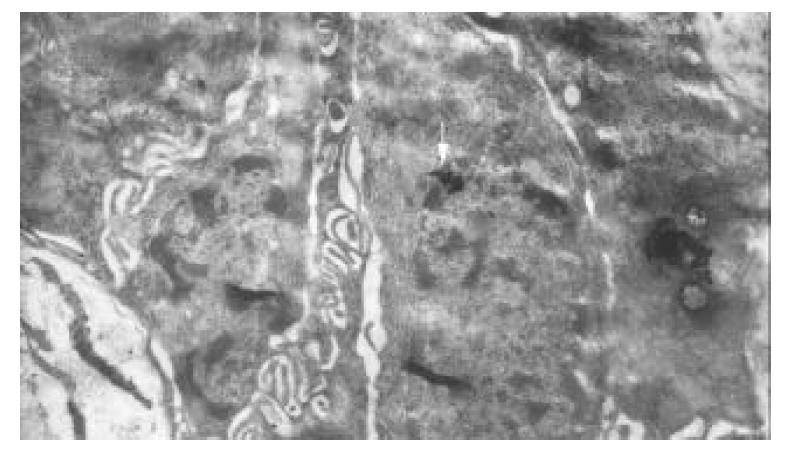 No immunological granules of colloidal gold were found in most antral mucosa cells, except those in D cells. Immunological granules of colloidal gold were found well distributed in D cells, with the ultrastructure clearly fixed. The membrane of D cells was intact, rough endoplasmic reticules were increased, and mitochondria decreased. The nuclei of D cells were normal, with their chromatin well distributed. The somatostatin labeled golden granules in D cells were clear, either round-shaped or olive-shaped, with a high electro-density. The granules presented mainly as lobation-like or island-like congeries, a few of them were dispersed in D cells while most of them were dissociated in cytoplasms of D cells, directing toward the basement membrane. Again, a few golden congeries in the nuclei of D cells were mainly located in euchromatin area (Figure 2). No golden congeries were found in heterochromatin area. The number of golden granules in a D cell was 83.36 ± 17.58. No colloidal gold-labeled cell was observed in control group. 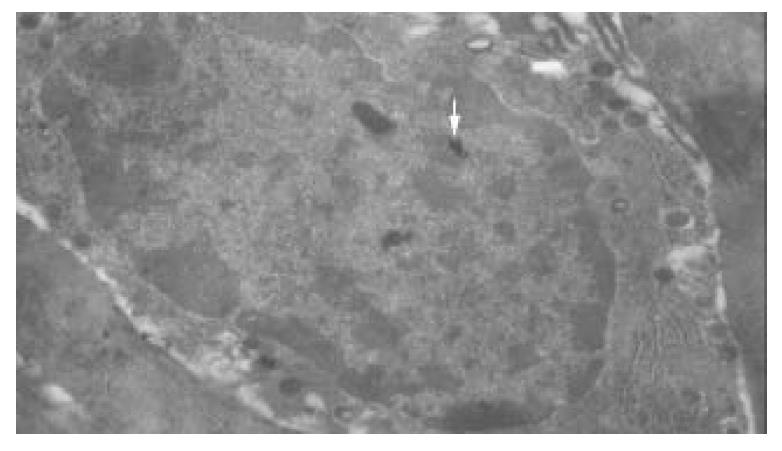 Gastric mucosa consists of highly organic multi-functional glands. In a single gastric gland there are at least five kinds of cells. They are the parietal cell, chief cell, endocrine cell, superficial epithelial cell and mucous cell. The stem cells of all these kinds of cells are in the neck area near the surface of the gland. When migrating upward to the surface of gland, they changed into the surface mucous cells. When migrating downward deeper into the gland, the proliferative stem cells changed into cells in forms of parietal cells, chief cells, and endocrine cells[9-11].

The features of gastrin can be briefly summarized as follows. There are gastrin receptors both in parietal cells and in ECL cells. As the main regulating hormone of gastric acid secretion, gastrin stimulates parietal cells to secrete gastric acid directly via the gastrin receptors in parietal cells and also stimulates ECL cells to secrete histamine via the gastric receptors in the cells. Then histamine stimulates parietal cells to secrete gastric acid via H2 receptors in parietal cells in a paracrine style. While accelerating the secretion of pepsin, secretin, pancreatic juice, and the secretion of water and salt in bile, gastrin also speeds up the releasing of insulin and calcitonin. It has both nutritional and accelerating effects on gastric mucosa. It also has a growth factor producing the similar effect. In the same way, the increase of gastrin would lead to the increasing number of both parietal cells and ECL cells. Apart from all these, gastrin is also closely related with the occurrence of carcinoid tumor. Gastrin enhances the motion of gastrointestinal tract, thus increasing the contraction effect of the stomach, intestine and gall bladder. In addition, there are reports that G cells should be taken as the fourth histamine source in stomach besides chief cells, ECL cells, and intestinal nerve plexus. Increase of pH, intake of meal, increase of pressure in the stomach, and excitation introduced by vagus nerve or mucosa nerve plexus could make G cells secrete more gastrin. Decrease of pH stimulated by somatostatin or other gastrointestinal hormones, and excitation of sympathetic nerve could inhibit the secretion of gastrin[12-17].