METHODS: We administered 200 mg oral NAC three times daily (600 mg/day) to the study group and placebo capsules to the control group. All patients were hospitalized and diagnosed as AVH. Blood total and direct bilirubin, ALT, AST, alkaline phosphatese, albumin and globulin levels of each patient were measured twice weekly until total bilirubin level dropped under 2 mg/dl, ALT level under 100 U/L, follow up was continued and then the patients were discharged.

CONCLUSION: NAC administration effected neither the time necessary for normalization of ALT and total bilirubin values nor duration of hospitalization, so we could not suggest NAC for the treatment of icteric AVH cases. However, our results have shown that this drug is not harmful to patients with AVH.

Acute viral hepatitis (AVH) is an infectious disease that occurs as liver cell necrosis and inflammation as a result of the infection of liver cells by various viruses[1,2]. Its significant symptoms and alterations occur in the liver and its functions[3,4]. It is accepted that AVH is a liver disease with the highest incidence in the world and that it is a major cause of jaundice[5]. It is a public health problem in developing countries which include our country as well. Moreover, hepatitis B and C may lead to chronic hepatitis, cirrhosis and cancer, and also constitute an endemic health problem for the society and is a cause of serious economic loss[6,7]. Various medications have been tried in the treatment of acute viral hepatitis, but no superiorities to placebo was demonstrated in most of these medications and they were not recommended for routine use[8-9].

NAC (N-acetyl cysteine) is frequently used as a mucolitic and as an antidote in paracetamol intoxication[10-11]. NAC may maintain cell integrity by increasing the amount of glutathione within the cell or coming into direct reaction with spontaneous conjugation and/or reduction[12]. Recently, some studies have shown good results and absence of side effects in patients treated with interferon and NAS in chronic hepatitis C patients[13-15]. In addition, treatment of HBV-producing cell lines with NAC resulted in an at least 50-fold reduction of viral DNA in the tissue culture supernatant within 48 hours[16]. The need for a treatment to shorten duration of AVH is obvious, but it has not been found yet. We thought this problem might be solved with NAC which protects the cellular architecture by increasing the amount of intracellular glutathione that reacts with toxic free oxygen radicals[17].

In this study, 41 acute viral hepatitis A or B cases were included. These cases were hospitalized and monitored in the Infectious Diseases Department Cerrahpasa Faculty of Medicine, Istanbul University.

The cases who were hospitalized and monitored in the clinic were randomized into study group (20 patients) and control group (21 patients). Randomization was carried out according to age, gender and etiological agents. In the study group, 200 mg NAC was given orally 3 times a day (600 mg/day). In the control group, placebo was given orally 3 times a day.

The study protocol was approved by the local ethics committee. All patients were informed to participate in by an inscription form in the study.

Levels of the biochemical parameters [total and direct bilirubin, alanine aminotransferase (ALT), aspartate aminotransferase (AST), alkaline phosphatase, albumin and globulin levels and prothrombine activities] were monitored in both drug and control groups. This monitoring process continued until the level of total serum bilirubin reached 2 mg/dl and the ALT level fell below 100 U/L. Then the patients were discharged from the hospital. All patients were followed up for six months after discharge.

In evaluating the results of the study, Student’s t test was used for average age, gender, values concerning the etiologic agents and covariate analysis tests were used for biochemical parameters, averages of hyperbilirubinemia, ALT, and time needed before they reached normal values.

In our study, the most important finding was the time needed for ALT and total bilirubin to reach normal. The criteria used to include a case in our study was ALT value that was ten times higher than the normal and the criteria used to end the surveillance of a case was its falling below 100 U/L. Jaundice was defined as the situation in which the serum total bilirubin level was higher than 3 mg/dl. Period of jaundice was defined as the duration that ended when the increasing bilirubin decreased to 2 mg/dl.

As a conclusion, the hospitalization duration and time to normalization of ALT and total bilirubin of the patients did not get shorter or longer (as an adverse effect) with the use of NAC.

Virus hepatitis is an important health problem in the world. Hepatitis A is a common infection in our country, so is in the world and 50% of the population aged up to 15 and 90% of the adults are exposed to this disease[18]. Annual disease reporting was approximately 25000 according to the data of the Ministry of Health in Turkey[19]. However it was believed that the real number of the cases was at least 250000-500000 per year, when the unreported cases and anicteric and subclinical cases were added[20,21].

When AVH displays a symptomatic presentation, it is generally cured at the end but after a long course. It is a public health problem in developing countries which include our country as well. Hepatitis B, C, D viruses causing AVH may lead to cirrhosis and cancer, and also constitute an endemic health problem for the society and are the cause for serious economic losses[22,23]. Various medications including steroids, interferon, vidarabine, levamizol, ursodeoxicolic acids, ribavarine have been tried in the treatment of acute viral hepatitis, but advantages over placebo offered by most of these medications were not found to be good enough to be recommended for routine use[24,25]. Thus the gap in the treatment of AVH has not been filled yet. We thought that this gap could be filled by NAC.

NAC is frequently used as mucolitic and as an antidote for paracetamol intoxication. It was used in paracetamol intoxication as it could fill the mitochondrial and cytosolic glutathione stocks consumed by N acetyl benzoquinoneimine, which is a paracetamol metabolite, by stimulating glutathione synthesis[26]. Under physiological conditions, there is basal glutathione outrun from the liver into the blood. It has been observed that intracellular glutathione participated in some critical physiological activities such as provision of membrane and cell skeleton unity, arrangement of enzyme activities and biosynthesis of protein and nucleic acids[8,13]. It might also lead to serious decreases in the intracellular and tissue glutathione and heavy pathological transformations in this tissue[9,10].

Recently, some studies have shown good results and absence of side effects in patients treated with NAC in hepatitis B and chronic hepatitis C patients[13]. Addition of NAC which is a glutathione precursor, to 14 patients with chronic hepatitis C and high ALT level, caused a regular decrease of ALT in all patients and after a combined treatment it helped 41% of the cases to heal completely after 5- 6 months. Consequently, it was reported that NAC increased interferon response in patients with hepatitis C[14]. Recently Neri et al[13] reported the presence of oxidative stress in patients with chronic hepatitis C, earlier relapse in patients treated with interferon alone. They obtained significant results in patients treated with interferon plus NAC compared to those with interferon alone. Weiss et al showed that NAC was able to inhibit hepatitis B virus (HBV) replication, by a mechanism independent of the intracellular level of reactive oxygen intermediates. Treatment of HBV-producing cell lines with NAC resulted in an at least 50-fold reduction of viral DNA in the tissue culture supernatant within 48 h. This decrease of viral DNA and thus of virions in the tissue culture supernatant was caused by a disturbance of the virus assembly, rather than by a reduction of viral transcripts. Their data strongly suggested a potential use of this well-established, non-toxic drug for the treatment of HBV infection. They found that NAC, in contrast to interferon, exerted its anti-HBV activity at a posttranscriptional level, a combination of NAC with the established interferon therapy could also be suggested.

We conducted a comparative study to examine the effects of NAC on the functions of liver in AVH. Taking the disease period as the period in which the ALT value came back to normal, we measured the duration of this period in the study group and control group. We also examined the effect of NAC on the period of jaundice. AST, ALT and serum bilirubin measurements were among the tests that were not specific in the diagnosis of AVH, and these were parameters in harmony with the hepatocellular injury. In AVHs, transaminases had diagnostic value, rather than prognostic value. It was accepted that in AVH, these enzymes increased 10 times, ALT maintained to be higher than AST and then it decreased in an evident way in the first week, then it came back to normal in 2- 4 weeks.

In AVH infections, the value of total serum bilirubin increased up to 3-20 mg/dl in 1-2 weeks under normal conditions and although serum aminotransferases levels started to fall, bilirubin levels might continue to increase, then they gradually decreased. In the study and control groups, total bilirubin levels were 7.75 ± 4.36 mg/dl and 10.1 ± 3.04 mg/dl respectively. The average period of jaundice was 13.7 ± 8.5 days in the study group, and 16.9 ± 7.8 days in the control group (P > 0.05).

During ALT, AST, bilirubin values came back to normal in the study and control groups, the patients with hepatitis A and B infection were evaluated separately, the difference was not statistically meaningful. The curves of AST and ALT in the study and control groups were not statistically different (Figures 1 and 2). Thus it became obvious that NAC did not change the liver enzyme activities in the patients with AVH. 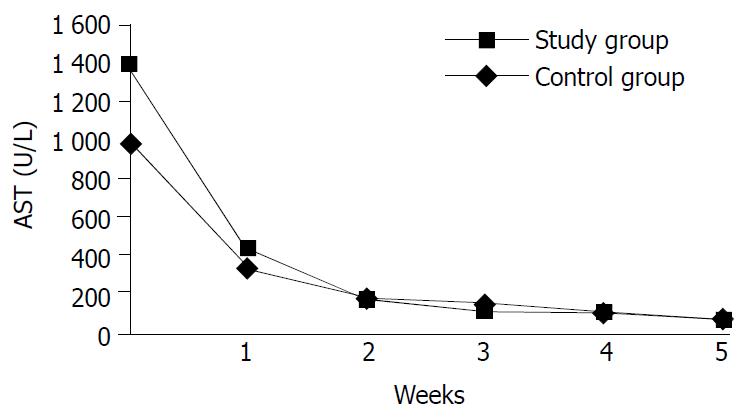 Figure 1 Changes in averages of ALT values in the study and control groups in time. 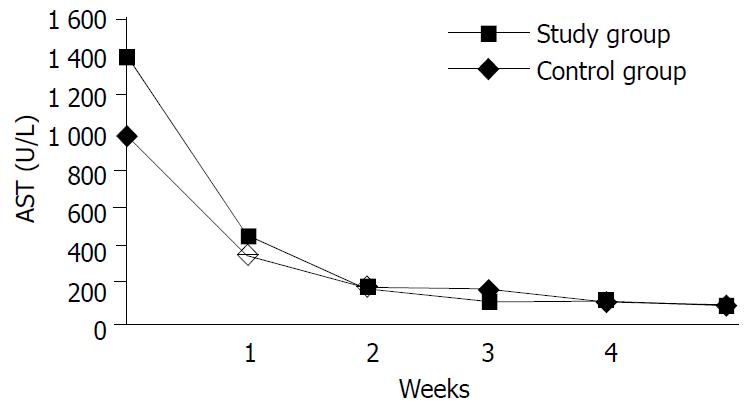 Figure 2 Changes in averages of AST values in the study and control groups in time.

This was the first study investigating the effect of NAC on AVH. In this study, it was determined that NAC had no effect on the jaundice duration in AVH infection and the period in which the ALT value came back to normal and accordingly hospitalization duration of AVH patients and the prognosis of biochemical parameters.