AIM: To evaluate and compare the effect of combined transarterial chemoembolization (TACE) and arterial administration of Bletilla striata (a Chinese traditional medicine against liver tumor) versus TACE alone for the treatment of hepatocellular carcinoma (HCC) in ACI rats.

CONCLUSION: Combination of TACE and arterial administration of Bletilla striata plus ligation of hepatic artery is more effective than TACE alone in the treatment of HCC in rats.

HCC is a highly malignant tumor with a very high morbidity and mortality rate worldwide, carrying a poor prognosis due to its rapid infiltrating growth and complicating liver cirrhosis[1,2].

Surgical resection, liver transplantation and cryosurgery are regarded as potentially curative treatment for HCC[3-5], but most patients are not suitable candidates[6-9]. Thus, the local interventional therapy of liver tumor has been rapidly evolving currently, which includes transarterial chemoembolization (TACE), percutaneous ethanol injection (PEI), radiofrequency ablation (RFA), laser-induced thermotherapy (LITT) and microwave coagulation therapy (MCT)[10-19]. TACE is one of the most common forms of interventional therapies and seems most effective against encapsulated small HCCs without extracapsular invasion, whereas in large HCCs, viable residual tumor cells remain and the tumor frequently recurs[20-22]. Moreover, in patients with large lesions, multiple TACE sessions are necessary to control tumor growth but may increase the risk of worsening hepatic function through damage to noncancerous liver parenchyma[8,21,23].

In the past years, locoregional Chinese medicinal therapy for treating unresectable HCC has been reported with encouraging results, especially for inhibiting arterial collaterals of liver tumor and recurrence of HCC[24,25]. Such an adjuvant treatment in conjunction with TACE has the potential to enhance the therapeutic effect of TACE alone in experimental and clinical studies. However, no experimental study to assess the value and efficacy of this combined therapy in an animal model of HCC has been performed.

The current prospective randomized study was designed to compare the effect of combined TACE and arterial administration of Bletilla striata (a Chinese traditional medicine against liver tumor) versus TACE alone for the treatment of HCC in ACI rats.

The hepatoma cell line (Morris hepatoma 3924A), a rapidly growing, poorly differentiated hepatocellular carcinoma[26], was used in ACI rats in this study. The hepatoma specimens were obtained from the German Cancer Research Center (DKFZ; Heidelberg, Germany).

Thirty inbred male ACI-rats (Harlan Winkelmann; Borchen, Germany) weighing 220-260 g were used. The animals were kept under conventional conditions with a temperature of 22 ± 2 °C, a relative humidity of 55% ± 10%, a dark-light rhythm of 12 hr, and had free access to laboratory chow and tap water. All of the experiments on animals were approved by the German government.

The technique for tumor implantation was basically similar to that described by Yang et al[26] with minor modifications[27-29]. The Morris hepatoma 3924A tumor tissue, recovered from the passaged animals 2 weeks after subcutaneous implantation (corresponding to 5 × 106 tumor cells), was cut into small cubes about 2 mm3.

A small subcapsular incision on the left lateral lobe of the liver was made in the recipient ACI-rats under anesthesia. The tumor fragment was gently placed into the pocket with a small cotton swab on the liver surface and the abdominal wall was then closed.

A 1.5 Tesla Sonata (Siemens; Erlangen, Germany) supplemented by a wrist coil (Small field of view) was used for MRI before and after therapy (on day 13 and 27). T1-weighted (SE: TR/ TE, 460/15 ms) and T2-weighted (TSE: TR/TE, 3170/99 ms) transverse images with a section thickness of 2 mm and 184 × 256 matrix were acquired. There was no gap between sections and no contrast medium was administered. The tumor volume was determined and evaluated in T2-weighted image according to the formula[30]:

The mean tumor growth ratio (V2/V1) was analyzed by using t test for comparing the effect of each therapeutic group with control group respectively. A P-value less than 0.05 was considered to indicate a significant difference.

The rate of tumor implantation reached 100% in all the rats receiving tumor implantation with Morris hepatoma 3924A. None of the animals died during implantation or interventional therapy. A total of 30 individual HCC tumors were seen with unenhanced MR imaging in the livers of 30 rats (100%) before treatment. The tumors showed homogeneously hypointense on the T1-weighted images and hyperintense on the T2-weighted images. T2-weighted sequences provided significantly higher tumor-liver contrast than T1-weighted sequences, and improved the detectability of intrahepatic metastasis. Intrahepatic metastasis occurred in two of 10 rats (20%) in group C.

In group B (TACE + Bletilla striata + ligation), relative small tumors with the size of 0.52 × 0.37 mm2 and 0.44 × 0.38 mm2 in diameter were shown in two treated rats, respectively, indicating a minimal response but no tumor growth after therapy compared with that before therapy (Figure 1). 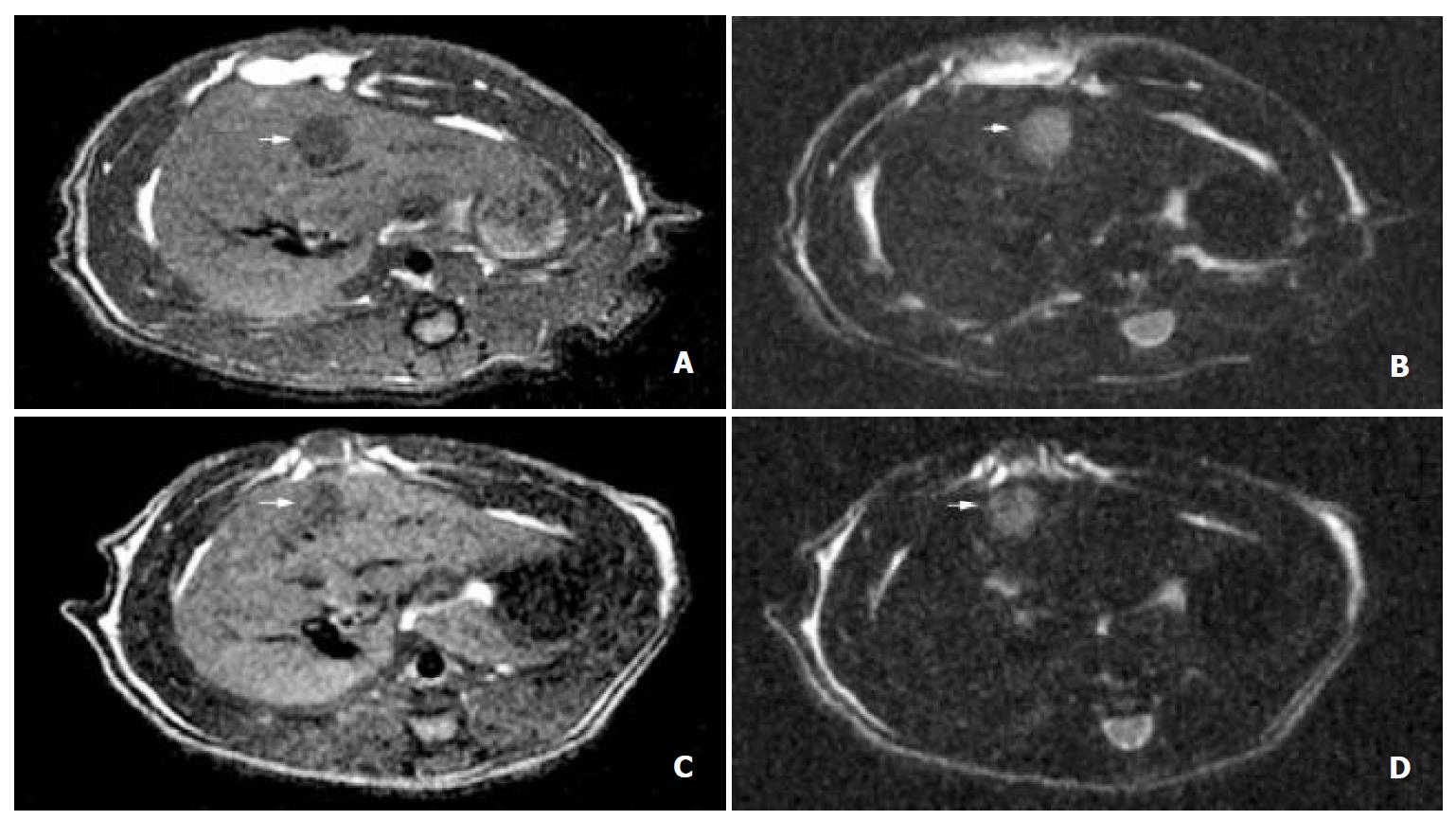 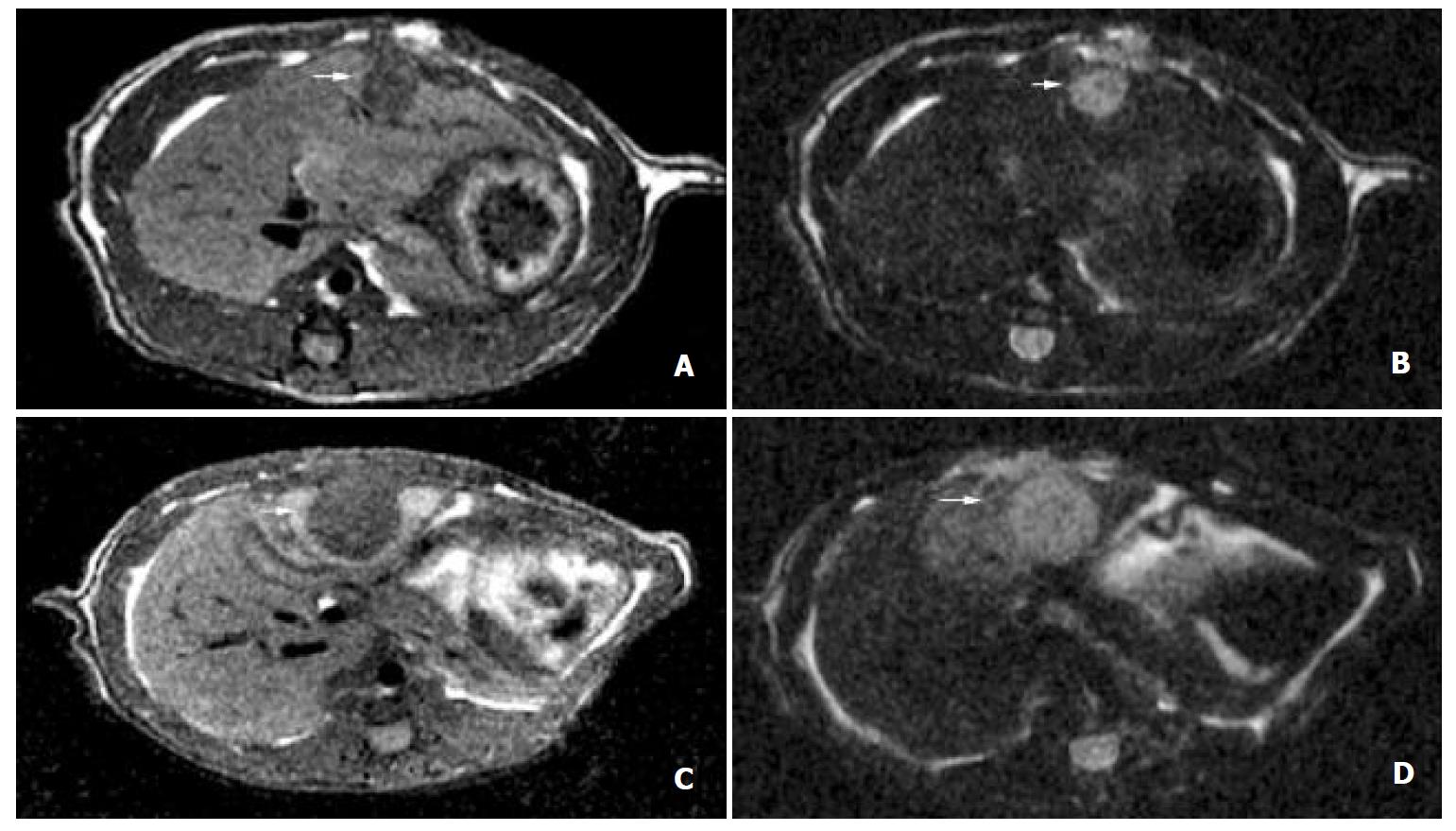 Since TACE was introduced as a palliative treatment in patients with unresectable HCC, it has become one of the most common forms of interventional therapies[11,31]. TACE with iodized oil has been shown to result in regression of HCC and reduction of systemic toxicity, thus improving the therapeutic effects[21,32,33]. However, prolongation of the overall survival of patients remains questionable[34]. TACE might ablate a significant portion of the tumor but had a high rate of recurrence[35]. In patients with focal HCC, TACE was well tolerated and provided a survival benefit. However, no apparent benefit of it has been found for patients with diffuse HCC[36,37]. TACE using various embolizers has been well documented to include controlled studies. However, it is not indicated for patients with thrombosed main portal veins. Its therapeutic effect was also doubtful when the tumor was infiltrative in nature or hypovascular, too large or too small[38,39]. The rapid development of arterial collaterals after these treatments might reduce this therapeutic effect and thus, inhibition of the development of arterial collaterals might be important in enhancing the therapeutic efficacy of these treatments[40]. In addition, in patients with large lesions, multiple TACE sessions were necessary to control tumor growth but might increase the risk of worsening hepatic function through damage to noncancerous liver parenchyma[23]. Moreover, the types and doses of embolic agents have been extremely variable in several reported studies. The major problem with embolic agents were twofold[41]. First, they could often completely obstruct the hepatic artery, leading to difficulties in administration of subsequent courses of hepatic artery chemotherapy. With a relative short half-life of embolic agents, the effectiveness of TACE was not significantly improved. Second, it was easy to aggravate the liver cirrhosis and lead to hepatic failure after repeated TACE. The optimal treatment modality of TACE is still unknown[42].

Today, it is well known that improvement of the overall therapeutic effect of liver malignancies depends on the combined therapies. In the past years, locoregional Chinese medicinal therapy has gained wide acceptance as a safe, palliative and effective treatment even in patients with large HCC and liver cirrhosis in China. Bletilla striata (BS) is a common Chinese traditional medicinal herb and is usually used as an embolic material in TACE for HCC. Its compositions are mucilage, starch, and a little volatile oil. In a previous study, Zheng et al[24] used BS to embolize the hepatic artery in order to induce ischemic necrosis and shrinkage of tumor. It mainly blocked the trunk of the blood-supplying artery of tumor with a "vascular cast-like appearance". The embolization was extensive and lasted longer, hence a better therapeutic effect[24]. The mechanisms of embolization by BS are attributable to the following factors: non-absorbent property, total mechanical obstruction, no influence on coagulative and anticoagulative systems and secondary obstruction due to injury of the wall of blood vessels[43,44]. Zheng et al[25] have confirmed that BS has an adherent function and can expand slowly in blood flow, leading to mechanical blockade of vessels. It was also hypothesized that BS could slowly diffuse into the liver parenchyma around the tumor as a colloidal form, leading to prolonged anticancer effect and inhibition of collateralisation and metastasis of tumor[25]. Compared with gelfoam embolus, BS had the following characteristics. It could produce extensive and permanent vascular embolization, while it could not be absorbed by body tissue. After embolization, tumor necrosis and shrinkage were significant with less collateral circulation that formed later. The mucilage component of BS is a wide-spectrum anticancer element that might inhibit tumor occurrence and development[45]. The 1, 2 and 3 year survival rates were 44.9%, 33.6% and 33.6% in BS group while the rates were 48.9%, 31.1% and 16.0% in gelfoam group, suggesting that BS is superior to gelfoam as an embolic agent, and transarterial administration of BS might provide a beneficial therapeutic modality for HCC[45]. In our experimental study, the best therapeutic effect was the combined therapy of BS+TACE+ligation of hepatic artery. There was almost no significant difference between the tumor volume before and after therapy (Figure 1). No intrahepatic metastasis was observed in this group. This approach of central- and peripheral chemoembolization is able to increase the inhibition of tumor growth more completely, resulting in local control of tumor growth in rats and has a promising prospect for treating patients with HCC in the future.

In summary, by combining TACE and arterial administration of Bletilla striata plus ligation of hepatic artery for treating HCC in ACI rats, an encouraging result can be obtained compared with TACE alone. However, the detailed therapeutic mechanisms, therapeutic indications, optimal strategy for the use, monitoring, and validation of these combined therapies remain unclear and more randomized experimental and clinical studies are required.