AIM: To study the effects of Rheum tanguticum polysaccharide-1 (RTP-1) on ulcerative colitis in rats induced by 2, 4, 6-trinitrophene sulphonic acid (TNBS) and their possible mechanism.

METHODS: RTP1 (200 mg·kg-1, ig) extracted from Rheum tanguticum Maxim. ex Regel was administrated to rats with colitis induced by TNBS for 5 d, 7 d, 10 d and 14 d, respectively. The effects of RTP1 and dexamethasone (DX, 0.2 mg·kg-1, ig) were contrastively investigated. The MPO level and SOD activity were determined by chromatometry. The expansion and protein expression of CD4+ T lymphocytes isolated from colon mucosae and mesenteric lymph nodes of colitis rats were performed by immunohistochemical analysis and Western-blot methods.

CONCLUSION: RTP1 shows significantly protective effects but lower side effects on rats with colitis induced by TNBS. The mechanism may be due to the resistance to over expansion of CD4.

Inflammatory bowel diseases (IBD), including ulcerative colitis (UC) and Cron’s disease, are complex autoimmune diseases whose etiology and pathogenesis have not been fully elucidated. IBD is related with multiple etiologic theories such as genetics, immunology and environment[1,2]. In recent years, a study of animal models of IBD pathogenesis showed that immune imbalance led to the inflammation in the gastrointestinal tract[3]. A growing number of evidences support an important role for dysregulated CD4+ T cells response to the antigens, such as enteric bacterial flora, as a common disease mechanism[4-6]. Previous studies have also demonstrated an increasing number of infiltrating CD4+ T cells and anti-CD4 antibodies are thought to be effective[7-9]. The fact showed that an imbalance of excessive CD4/Th1 cell response or inadequate CD4/Th2 cells response was involved in experimental colitis[10]. These studies strongly suggest that immunomodulatory drugs have a bright future in IBD therapy, and CD4 could be a potential therapeutic target of colitis drug research[11]. Many biologic therapies are being evaluated for the treatment of chronic inflammatory bowel diseases[12-15]. However, during recent years, the mainstay therapies for IBD were anti-inflammatory drugs and glucocorticosteroids (GCS)[16,17]. The incidence of IBD is increasing in Asia[18,19], some traditional Chinese medicine therapies, such as moxibustion[20] and decoction, have shown significant therapeutic effectiveness on IBD. Rhubarb which has been used for gastrointestinal disease, is a main ingredient of some decoctions administrated to patients with IBD. Our previous data showed Rheum tanguticum polysaccharide (RTP) extracted from Rheum tanguticum Maxim. ex Regel, could significantly protect against acute hepatic injury and oxidation injury[21,22]. Although there is no evidence whether IBD patients can benefit from RTP, heparin exhibits significant effects on colitis[23,24] and some plant polysaccharides exhibit immune regulative effects[25,26]. Therefore, we administered RTP1 to colitis rats and investigated its therapeutical effectiveness on colitis rats-induced by TNBS and the expansion and protein level of CD4+ lymphocytes, which were the potential targets of colitis immunoregulatory therapy.

Rhubarb, identified by professor Ren Yi Northwest University of china, was Rheum tanguticum Maxim.ex Regel. Rheum tanguticum polysaccharide (RTP) was extracted according to the methods described previously[27]. In brief, Rheum tanguticum Maxim (1 kg) was fragmented and boiled 3 times, 8 hours each time with absolute ethanol for 24 hours to extract the components dissolved in ethanol. The residue was boiled for another three times (8 h each time) with water to extract polysaccharide. All the water extractions were finally pooled and mixed with a finally concentrated ethanol solution of 75 mL/L to precipitate the polysaccharide-enriched fractions. After proteins removed by freezing-thawing methods, crude Rheum tanguticum polysaccharide (RTP) was obtained by dialysis, concentration and lyophilization. In this study, the polysaccharide (uronic acid) content of RTP1 was 97.4% (27.5%), and their molecular masses were 60 Kda-80 Kda, and RTP1was administered orally to rats to study the effects and mechanism on colitis.

Male Sprague-Dawley rats were fasted for 24 hours before experimentation but with free access to drinking tap water. Colitis model was produced as before[28] (Gastroenterology 1989;96:795-811). In brief, the rats (except rats in normal group) were lightly anesthetized with ether. A rubber catheter (OD 2 mm) was inserted rectally into the colon so that the tip was 8 cm proximal to the anus, approximately at the splenic flexure. TNBS dissolved in 40 mL/L in ethanol was instilled into the lumen of colon through the rubber catheter. Saline, RTP and DX were administrated 6 hours after induction of colitis model. The body weight was recorded during the experimental period. The rats were anesthetized with ether and killed by cervical dislocation on d5, d7, d10, d14, respectively. Each was 10 rats. The distal colon was removed and opened by a longitudinal incision, rinsed with saline, and weighed. Mucosal damage was assessed by measurement of ulcerative areas in colon mucosae by a single observer blinded to characteristics or treatment of the animals being studied. Colon samples were then excised, snap-frozen in liquid nitrogen, and stored at -80 °C for later assay of myloperoxidase (MPO) and superoxide dismutase (SOD). Additional samples were preserved in formaldehyde for histological and immunohistochemical analysis. Meantime, the spleen and thymus were removed and weighed.

The activity of MPO and SOD was determined by chromatometry. In brief, the colon tissue was suspended in 5 g/L hexadecytrimethyl-ammonium (pH6.0, 50 mg of tissue per milliliter) for MPO level and suspended in PBS (pH7.2, 100 mg per milliliter) for SOD level and then homogenized for 15 s by using a polytron generator in ice bathing. The MPO and SOD levels in colon tissue were determined by using the technique described as before (Gastroenterology 1984;84:1344).

Immunohistochemical staining was performed on paraffin embedded sections by using biotinylated anti-CD4 mAb, and then operated according to the procedure for SBC immunohistochemiacal kit.

The rats with colitis induced by TNBS ethanol were killed by cervical dislocation. The lumenal lymphoid node was separated and homogenized in 1 mL lysis buffer in ice bathing for 10 min, then centrifuged at 11000 g for 5 min at 4 °C, and 30 μL suspension was moved to lodding buffer 15 mL. The samples were boiled for 10 min and subjected to electrophoresis on 120 g/L SDS-acrylamide gel. The gel was then electroblotted onto a ultrocellulose membrane, and detection of CD4 protein was conducted by using anti-CD4 mAb.

Results were expressed as mean ± standard deviation (x-±s). Differences between two groups were examined by Student’s t-test. A probability (P value) of less than 0.05 was considered statistically significant.

RESULTS
Effects of RTP1 on rats with TNBS-induced colitis

Grossly visible colon wall thicking, inflammation, and ulcers were found in the animals that received TNBS in 400 mL/L ethanol. Treatments of RTP1 (200 mg·kg-1 ig) significantly reduced diarrhea, mortality, colon mass and ulcer area. The effect of RTP1 on colitis was similar to that in DX group (Figure 1, Table 1).

The MPO activity and SOD level in TNBS-induced colitis rats were much higher than those in control. Treatments with RTP1 (200 mg·kg-1 ig) significantly increased SOD activity, meanwhile, decreased MPO level in colon mucosae. The effects of DX on MPO and SOD activity of colon mucosae were similar to those of RTP1 (Table 2).

Effects of RTP1 on body weight, thymus and spleen index

Evidences indicated that CD4+ T cells played a key role in the pathogenesis of gastrointestinal tissue damage in ulcerative colitis. According to the results of immunohistochemical and Western-blot of CD4+ T lymphocytes isolated from colon tissues, there were a great increase of CD4 lymphocytes in the diseased colon and a significant decrease ofter the treatment with RTP1 (200 mg·kg-1 ig). (Figure 2, Figure 3). 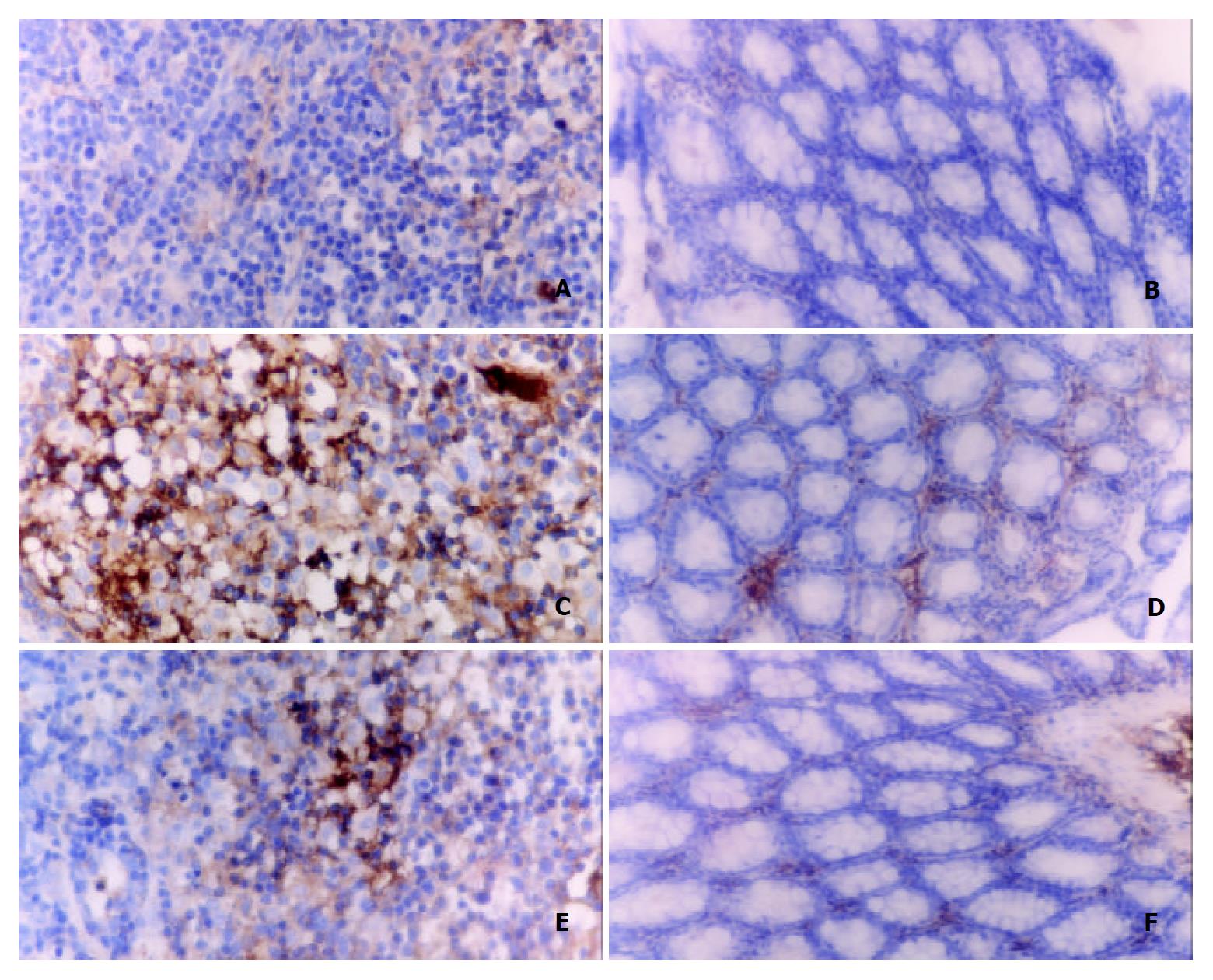 Some plant polysaccharides are known to posses immunorgulatory effects and wide bioactivities[29,30]. Rhubarb has traditionally been used as a folk remedy for gastrointestinal diseases for over two thousand years in China. We hypothesized that polysaccharide isolated from rhubarb might exhibit immune regulation on colitis rats. To test this hypothesis, we extracted polysaccharide from a breed of rhubarb, Rheum tanguticum Maxim. ex Regel., then administrated RTP to rats with colitis induced by TNBS. The results showed striking therapeutic effectiveness of RTP on the experimental colitis by attenuating the colon weight increase, decreasing the ulcer area formation, which resulted in a rapid recovery of animals from colitis induced by TNBS-enema. There was no significant difference between RTP and DX on colitis. Besides, RTP had no immunosuppressive side effects as DX.

Ulcerative colitis (UC) is considered to have a multifactorial etiology leading to intricate pathogenic mechanism that results in complex clinical manifestations. In recent years, the established animal models of immunology, genetics and biochemistry have promoted the study on pathogenic mechanism of UC[3]. The animal model of colitis induced by TNBS-enema, used in the present study, was considerated the characteristics as excessive Th1/CD4+ T lymphocytes response and similar to human IBD[31]. The TNBS-induced animal model, which was duplicated and cheap, was most commonly used to estimate the therapeutic effectiveness of colitis[3]. Therefore, this TNBS/ethanol-induced animal model may be suitable for investigate the therapeutic effectiveness and mechanism of RTP on colitis.

Colonic lesion and inflammation induced by TNBS-ethanol were accompanied by a drastic elevation of MPO activity in colonic tissues. This enzyme was used as an index of quantitative inflammation and a marker of neutrophil infiltration in the tissue (Gastroenterology 1989;96:795-811). In the present study, administration of RTP significantly attenuated the increase of colonic MPO activity, indicating its anti-inflammatory effect. SOD is an antioxidant enzyme that is cytoprotective in many tissues, because it scavenges the overproduced superoxide by stimulants. This study showed that the SOD activity in colonic tissue was significantly increased on days 5 and 7, but returned to normal level on days 10 and 14 after TNBS-enema. It is envisaged that the elevated SOD activity may be a protective reaction in the colonic tissue against the overproduction of superoxide during the early active phase of colonic inflammation. Administration of RTP markedly increased SOD activity after TNBS-enema and kept SOD at a higher level till 14 d. This result indicated that the therapeutic effectiveness of RTP on colitis might be at least in part, through its anti-oxidative effect. However, the underlying mechanisms of the therapeutic effectiveness of RTP need further studies. All these findings implicate that RTP has a very impressive therapeutic effectiveness on experimental colitis, and RTP may be the main component of Rheum Rheum tanguticum that is commonly used as a classic Chinese drug against inflammation in gut.

An increasing body of evidence suggests that inflammatory bowel disease (IBD) is due to abnormal function of regulatory T cells required for immunological homeostasis in gut-associated lymphoid tissue (GALT)[32]. CD4+ T lymphocytes play an important role in the progressive and perpetuated inflammation of colitis[33,34]. In this study, RTP showed significant effects on resistance to the up-expression of CD4+ protein levels, suggesting that the mechanism of RTP on colitis is related to the modulation of CD4+ T cell dysfunction. CD4+ T cells containing both CD45RBhigh and CD45RBlow populations participatein as a pathogenic subset that in turn leads to inflammatory reactions selectively in the large intestine, indicating that UC can be cured by maintaining the balance between the two subunits of CD4 and the balance between the cytokines nets[35]. Therefore, CD4+ T cell may be a new potential target of therapeutic drugs on UC patients.