AIM: To introduce an animal model of hepatocellular carcinoma (HCC) in ACI-rats, and to evaluate the therapeutic effects of Poly-lactide-co-glycolide(Plcg)-microspheres in the transarterial chemoembolization (TACE) in this model, as well the value of this model in the experiments of interventional therapy.

METHODS: Subcapsular implantation of a solid Morris Hepatoma 3924A (1 mm3) in the livers was carried out in 11 male ACI-rats. The tumor volume (V1) was measured by magnetic resonance imaging (MRI) (13 days after implantation). After laparotomy and retrograde placement of catheter into the gastroduodenal artery (14 days after implantation), the following protocols of interventional treatment were performed: (A) mitomycin C+Poly-lactide-co-glycolide(Plcg)-microspheres (n = 4); (B) 0.9% NaCl (control group, n = 7). 13 days after these therapies the change of the tumor volume (V2) was determined by MRI again.

CONCLUSION: The growth of liver tumor could be obviously prevented by utilizing Plcg-mitomycin-microspheres in TACE in animal model. This rat model of HCC is suitable for the experimental studies of interventional therapy.

Hepatocellular carcinoma (HCC) is one of the most common malignancies in the world, responsible for an estimated one million deaths annually[1,2]. In China, HCC has been ranked second of cancer mortality since 1990s[3]. It has a poor prognosis due to its rapid infiltrating growth and complicating liver cirrhosis[4]. Surgical resection is still the only potentially curative treatment for HCC, particularly for small HCC[3]. To date, the resection rate for HCC is unfortunately less than 30%[5,6]. Transarterial chemoembolization (TACE) is currently the first choice of treatment for most unresectable HCC and improve the survival rate in selected patients[7-13]. However, the technical variants of TACE have often been chosen on an empirical basis and it is not always safe and effective[14-16]. Although TACE advantageously combines arterial embolization of the vascular supply of HCC with controlled intra-arterial infusion of chemotherapeutic drugs, its application is limited by the lack of appropriate and reliable embolization materials[15,16]. Recently, poly-lactide-co-glycolide (Plcg)-microspheres has been proved to be a new promising embolic agent[17,18]. In order to study the interventional therapeutic strategies for HCC, it is necessary to establish a suitable and reproducible animal model. The aim of the present study was to introduce an animal model of HCC with the technique of tumor implantation in ACI-rats, and to evaluate the therapeutic effect of different methods of TACE, including the efficiency of Plcg-microspheres in this animal model. MRI was performed for measuring the tumor volume before and after the TACE in this study.

Morris hepatoma 3924A, a rapidly growing, poorly differentiated hepatocellular carcinoma, was induced by dietary administration of N-2-fluorenyldiacetamide in an ACI rat. The hepatoma specimens were obtained from the German Cancer Research Center in Heidelberg (DKFZ).

Inbred male ACI-rats weighing 200 to 220 g (n = 15) were obtained from the company of Harlan Winkelmann in Germany. The animals were kept under conventional conditions with a temperature of 22 ± 2 °C, a relative humidity of 55% ± 10%, a dark-light rhythm of 12 hr, and were fed standard laboratory chow and tap water ad libitum.

The technique for tumor implantation was basically similar to that described by Yang et al[19,20] with minor modifications[21]. The Morris Hepatoma 3924A tumor tissue, recovered from the passaged animals 2 weeks after subcutaneous implantation (corresponding to 5 × 106 tumor cells), was cut into small cubes about 1 mm3.

The recipient ACI-rats were intraperitoneally anesthetized, and the upper abdomen was shaved. A small subcapsular incision on the left lateral lobe of the liver was made. The tumor fragment was gently placed into the pocket with a small cotton swab on the liver surface as hemostasis and the abdominal wall was then closed.

Catheterization and TACE (At day 14) 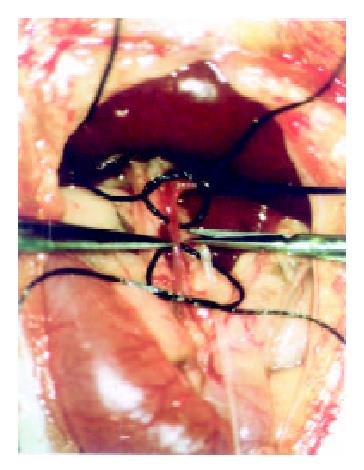 Figure 1 Catheterization of the gastroduodenal artery in vivo

MRI was performed in a 1.0 Tesla Magnetom superconducting system (Siemens, Erlangen, Germany) supplemented by a commercial coil (Small Field of View) before and after the catheterization (At day 13 and 27). T1-weighted (TR/TE, 400/14 ms) and T2-weighted (TR/TE, 3000/96 ms) axial SE images with spatial presaturation for controlling the flow artifact were acquired. Slice thickness was 2.0 mm, Matrix was 192 × 256. There was no gap between sections. The findings on T1- and T2-weighted SE images were examined in all 11 rats. Tumor volume was determined and evaluated according to the formula: Tumor volume (mm3) = Length (mm) × Width2 (mm)2/2[22].

The sensitivity of MRI for detecting HCC reached 100%. HCC showed a hypointense pattern on T1-weighted images and a hyperintense pattern on T2-weighted images in the left lateral lobe of the liver (Figure 2, Figure 3). Necrosis, hemorrhage and metastase of the tumor were not observed. The liver tumor was well discernible from the surrounding liver tissue on each image. 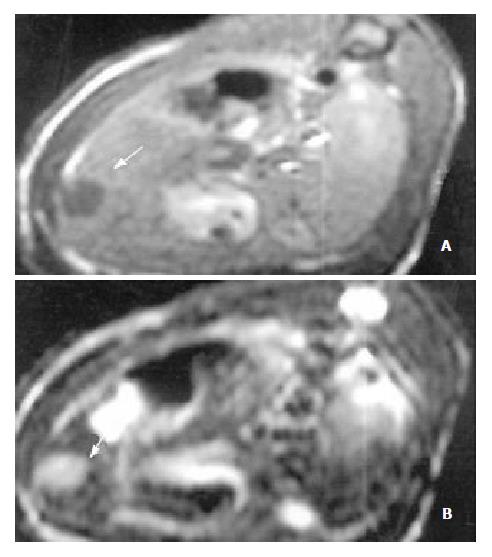 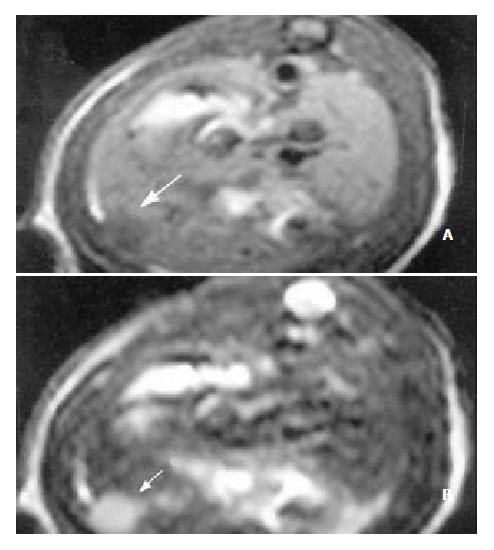 The efficiencies of Plcg-Mitomycin-microspheres in the interventional therapy of HCC in ACI-rats were shown in Table 1.

In order to investigate the efficiency of TACE for HCC, it is necessary to have a suitable and reproducible animal model. Various animal models of liver tumor have been established. The diethylnitrosamine model for hepatic tumor induction was simple, and provided a more representative range of tumors for experimental evaluation. However, the high mortality of the animals and various localization/number/size of the tumor in the liver were the major shortcomings. Therefore, the application of this model was extremely limited. The technique with a needle injection of tumor cells into hepatic parenchyma often caused tumor spill from the puncture channel and might result direct injection of the tumor cells into the circulation[19]. Although a relative high tumor take rate could be obtained by using the Walker-256/VX2 model in rats or rabbits with the technique of tumor implantation, these animal models belonged to carcinosarcoma or adenocarcinoma and were usually utilized for the study of liver metastases[23-27]. It is well known that the metastasis way and the therapeutic strategies as well the related effects of HCC and sarcoma are quite different from the aspect of histopathology, and a characteristic of HCC which distinguishes it from most metastases to the liver is that it is a highly vascular tumor[28], so that these animal models are unsatisfactory and not suitable for studying the interventional therapy.

In our present study, an animal model of HCC with the technique of tumor implantation previously described by Yang et al[19,20] was established. The rate of tumor implantation reached 100%[17]. Necrosis, hemorrhage and metastases of the tumor were not observed. Histopathologically, Morris hepatoma 3924A was a poorly differentiated hepatocellular carcinoma, mimicking the Edmondson grade-III hepatoma in humans[20] (Edmonson’s classification is based on the degree of differentiation of HCC). The appropriate growth speed of the liver tumor made it easy for MRI examination[29]. The blood supply of the tumor mainly came from hepatic arteries which was similar to that in human liver cancers[19,29]. As is known to all, HCC was usually hypervascular except for differentiated HCC and TACE was usually effective only for hypervascular HCC[30-33]. Compared to other animal models, our rat model was more suitable for the study of interventional therapy of HCC, and the related conclusion of the study was more convincing.

MRI examination for measuring the tumor volume without utilizing contrast media was carried out in our experiments. There was no single parameter better than tumor growth rate that could give information on the effects of different therapeutic maneuvers on tumor growth[22]. In another study of ours, we have demonstrated that MRI as an invasive imaging modality was superior to CT, DSA in the diagnosis of HCC in experiments[29]. It was supported by histological examination that MRI was also superior to ultrasonography for judging the tumor dimensions[29]. Another advantage of MRI was its excellent soft-tissue contrast resolution[34]. T1-weighted imaging was superior to T2-weighted imaging in depicting early HCC, but the latter could be useful in evaluating the progression of HCC in the histopathologically early stages[35]. The signal intensity on T2-weighted images correlated with the histological grade and histopathological change of HCC[35-37]. The detectability of MRI was 100% in the present study. HCC showed a hypointense pattern on T1-weighted images and a hyperintense pattern on T2-weighted images in the left lateral lobe of the liver. Necrosis, hemorrhage and metastase of the tumor were not observed. The contrast between the tumor and surrounding normal liver parenchyma was clear to observe. Based on these results, we concluded that MRI was useful in the assessment of the therapeutic effects of TACE in HCC.

TACE is one choice of the palliative treatment for unresectable HCC, particularly for patients with multifocal HCC and with acceptable liver functions. TACE caused tumor necrosis by occlusion of the feeding artery of HCC, and its clinical efficiencies have been generally recognized[38-41]. By using TACE with a combination of cytostatic drugs (mitomycin, doxorubicin, epirubicin, cisplatin, 5-Fu), a reduction of vital tumor tissue could be achieved[42-44], although the prolongation of survival remained questionable[45,46]. As stated before, although TACE advantageously combined arterial embolization of the vascular supply of a neoplasm with controlled intra-arterial infusion of chemotherapeutic drugs, its application was limited by the lack of appropriate and reliable embolic agents. The major problem with embolic agents are twofold[47]: first, they could often completely obstruct the hepatic artery, leading to difficulties in administration of subsequent courses of hepatic artery chemotherapy. With a relative short half-life of embolic agents, the effectiveness of TACE was not significantly improved; and second, it was easy to aggravate the liver cirrhosis and lead to hepatic failure after repeated TACE. The optimal treatment modality of TACE was unknown[14,48].

Recently, Plcg-microspheres have been proved to be a new promising embolic agent in TACE in experiments[17,18]. Verrijk and co-workers[49,50] reported that TACE with Plcg-microspheres and CDDP significantly improved the delivery of cytotoxic drugs to liver tumor and simultaneously reduced systemic toxicity in animals. Plcg-microspheres are biodegradable polymers with high molecular size and possess a good tissue compatibility. The degradation rate of polylactides is known to depend on the polymer microstructure that may be of the L, D or D, L type. The polyester lifetime could be controlled in a range of a few days or months[49-51]. It has been suggested that this drug could slowly release into the tumor tissues principally by a diffusion mechanism. It has also been indicated that the microspheres size of 40 µm allows a distal and homogeneous migration of the embolic agent within the targeted organ, without passing through the capillary filter[18], it is this reason that Plcg-microspheres with the size of 40 µm were chosen in our experiments. Verrijk et al[49,50] also demonstrated, that the absence of a burst effect and an adequate CDDP release from Plcg-CDDP-microspheres then significantly prolonged the first-pass effect, with the result that low systemic platinum levels were maintained while a liver platinum concentration was achieved which was high enough for an antitumor effect. The results of our present studies indicated that Plcg-microspheres could effectively retard the growth of HCC. Compared to the control group (group B), groups A (Plcg) showed a significant reduction of tumor growth (P = 0.004) in the period of observation by t-test. The therapeutic efficiencies of Plcg-mitomycin-microspheres was similar to Gelform+Mitomycin+Lipiodol in our another study (Mean V2/V1 = 2.86, P = 0.748, unpublished results).

To conclude, the growth of liver tumor was markedly prevented by the use of Plcg-mitomycin-microspheres in the TACE in an animal model. This effective and reliable embolic agent might be useful in clinic in future. However, the mechanism of effect of Plcg-microspheres is not clear so far. Data on a large number of animals and the test of application of various cytotoxic agents in the TACE, as well the repeated TACE will be required.