AIM: To investigate the effects of oxytocin (OT) on isolated rabbit proximal colon and its mechanism.

CONCLUSION: OT inhibits the motility of proximal colon in rabbits. The action is partly relevant with N receptor, but irrelevant with that of NO, progesterone or estrogen.

Oxytocin (OT) is a very abundant neuropeptide. The structure of the OT gene was elucidated in 1984[1], and the sequence of the OT receptor was reported in 1992[2]. OT exerted a wide spectrum of central and peripheral effects[3-5]. It was reported that hypothalamic paraventricular nucleus is a site of controlling gastric function[6], oxytocin facilitated the manifestation of inhibitory effects of hypothalamus on the motor function of gastrointestinal tract[7]. The experiments on rats had shown that gastric motility was inhibited by microinjection of oxytocin into the dorsal motor nucleus of the vagus (DMN), and that the inhibition of gastric motility after electrical stimulation of the hypothalamic paraventricular nucleus was blocked by microinjection of an oxytocin receptor antagonist directly into the DMN. These results suggested that oxytocin acted on the gastric motility via DMN[8]. The reports on peripheral action of oxytocin to influence gastrointestinal (GI) motility were controversial: OT decreases the contractions of the guinea pig stomach in vitro, and inhibits the tone and peristaltic contractions of stomach and small intestines in fasting dogs in vivo[9]; but increases the gastric emptying of semisolid food in normal human and the contractions of gastric smooth muscle strips in rats[10]. The effect of oxytocin on colonic motility is still unknown.

OTR is functionally coupled to GTP binding proteins, stimulates the activity of phospholipase C-β isoforms. Finally, a variety of cellular events are initiated. For example, the forming Ca2+-calmodulin complexes triggers the activation of neuronal and endothelial isoforms of nitric oxide (NO) synthase[11]. Steroid hormones were reported to control oxytocin receptor (OTR) activity via both genomic and nongenomic pathways[12]. Estrogen induces the OTR mRNA expression, and then increases the OTR density on the membrane of the uterus smooth muscle and central nervous system[13,14]; on the other hand, progesterone inhibits the nuclear OTR mRNA expression, and decreases the sensitivity of the target cell on OT stimulation[15,16]; progesterone was also reported to bind to OTR with high affinity and inhibit the receptor function[17]. In this study, we investigated the effect of OT on proximal colonic motility of rabbits; We also investigated if the OT-induced responses were relevant with NO, steroid hormones or N receptor.

Rabbits of both sexes, weighing 1.5-2 kg, were fasted for 24-hour and sacrificed. The proximal colon (1 cm from the cecocolonic junction) was removed. The segment of the colon was opened along the mesentery. Muscle strips (8 × 2 mm) were cut, parallel to either the circular or the longitudinal fibers, and named circular muscle (CM) and longitudinal muscle (LM). The mucosa on each strip was carefully removed.

The muscle strip was suspended in a tissue chamber containing 5 mL Krebs solution (37 °C) and bubbled continuously with 950 mL·L-1 O2 and 50 mL·L-1 CO2[18]. One end of the strip was fixed to a hook on the bottom of the chamber. The other end was connected to an external isometric force transducer (JZ-BK, BK). Motility of colonic strips (under an initial tension of 1 g) in 2 tissue chambers were simultaneously recorded on ink-writing recorders (LMS-ZB, Cheng-Du). After 1 h equilibration, OT (0.1, 1, 10 U·L-1) was added in the tissue chamber to observe their effects on proximal colon; Nω-nitro-L-arginine-methylester (L-NAME, 1 µmol·L-1), hexamethonium (10 µmol·L-1, progesterone (32 µmol·L-1) or estrogen (2.6 µmol·L-1), given 3 min before the administration of OT (1 U L-1), was added separately to investigate whether the actions of OT were relevant with NO, N receptor or steroids. The resting tension, the contractile frequency, and the mean contractile amplitude of LM and CM were measured.

The results were presented as -χ±s, and statistically analyzed by paired t test, P < 0.05 was considered to be significant. 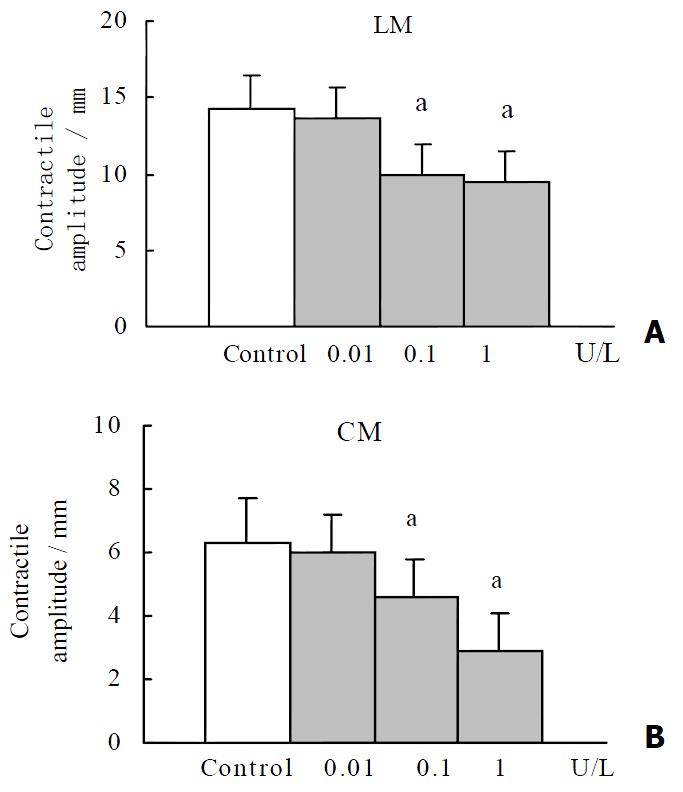 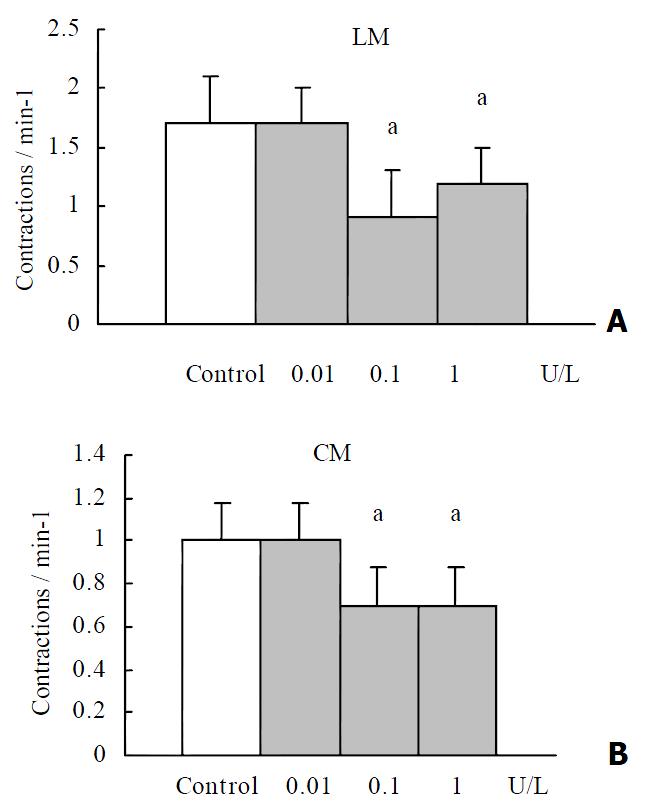 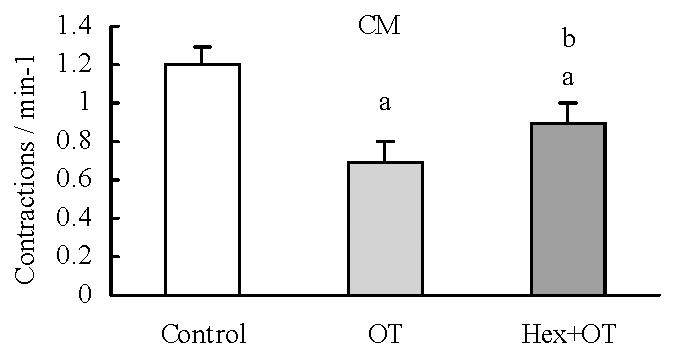 Figure 3 Effect of oxytocin on the contractile frequency of circular muscle (CM) of proximal colon after hexamethonium pretreatment in rabbits. OT, oxytocin; Hex, hexamethonium. aP < 0.05 vs control, bP < 0.05 vs oxytocin, n = 6.
Effect of L-NAME on the OT-induced responses

Effect of progesterone and estrogen on the OT-induced responses

The present study revealed that oxytocin 1 U·L-1 to 10 U·L-1 inhibited the spontaneous contractile motility of proximal colonic smooth muscle in rabbits. Petring et al[10] reported that veneinjection of oxytocin could increase the gastric emptying of semisolid food in normal human. Oxytocin10-100 U·L-1 stimulated the spontaneous contractile motility of gastric body and gastric antrum in rats in vitro. But oxytocin (10 pmol·L-1-10 nmol·L-1) suppressed the spontaneous contractions of circular smooth muscle from guinea-pig gastric antrum and gastric emptying in male rats[19,20]. Therefore, it seems that there are species, region and OT concentration differences in OT-induced contractions in gastrointestinal tract.

OT has been identified to exert the actions via OT receptors in many tissues, including the hypothalamus, uterus, kidney, pancreas, heart, vasculature, and thymus[25-30]. Oxytocin receptor are suggested to be present on the members of guinea-pig antral smooth muscle cells[19]. OT might act on the proximal colonic smooth muscle via selective oxytocin receptor, which still need to be further studied.

The function and physiological regulation of the OT system has been reported to be strongly steroid dependent[31,32]. But our results showed that both progesterone and estrogen had no significant effects on OT-induced responses.

Effects on the gastrointestinal tract muscle during pregnancy are caused primarily by hormonal changes, such as progesterone, estrogen, and other hormones[33]. Motility changes occur throughout the gastrointestinal tract during pregnancy, including colonic transit manifested primarily as abdominal bloating and constipation[34]. Both progesterone and estrogen have been shown to inhibit colonic motility and transit in rats[35]. But Hinds and associates[36] reported that no significant differences in colon transit were found between phase of the menstrual cycle or between women and men. Our results also showed that neither progesterone nor estrogen affected the proximal colonic motility in rabbits. OT was another hormone relate to pregnancy, and its plasma concentration was higher in late pregnancy[37,38]. Our results showed that OT inhibited the colonic motility. Results from these studies provided new insight into the mechanisms controlling colonic motility during pregnancy and may form the basis for drug treatments of colonic motility disorders.

In conclusion, oxytocin inhibit the contractile activity of proximal colonic smooth muscle of rabbits in vitro. The action is partly relevant with N receptor, but irrelevant with that of NO, progesterone or estrogen.