Total RNA was isolated by Tripure isolation reagent (Roche) according to manual provided by the kit. Any subject used in RNA isolation was treated with DEPC (Sigma) followed by vapor sterilization. A260/A280 of RNA samples were between 1.6 and 2.0.

Titan One Tube RT-PCR Kit (Roche) was applied according to manual for studying expression of mRNA of ATPase6, ATPase8, COI, COII and COIII genes. The PCR profile was as follows: a reverse-transcription reaction at 50 °C for 30 min and initial denaturation at 94 °C for 2 min, followed by 35 cycles of denaturation at 94 °C for 30 s, annealing at 56 °C for 30 s, primer extension at 68 °C for 45 s and a final extension at 68 °C for 10 min. PCR products were separated by electrophoresis on a 1% vertical agarose electrophoresis and observed under ultraviolet and stored in computer by gel imaging system. Relative density of genes was calculated by dividing density of respective gene with density of β-actin.

Mitochondria were isolated as described previously[16]. Cells about 1 × 107 were typsined followed by washing for one time, and then cells suspended in ice-cold isolation buffer (0.25 M sucrose, 10 mM Tris-HCl, pH 7.4) were homogenized with a glass homogenizer for 10 strokes in ice. The supernatants was further centrifuged at 1500 × g for 10 min at 4 °C, the pellet was suspended again in ice-cold isolation buffer and homogenized in ice. Two supernatants were mixed and centrifuged at 17000 × g for 10 min at 4 °C. Fresh isolated mitochondria was suspended in isolation buffer, protein concentration were determined by Folin-Phen assay and adjusted to 4 mg/mL. Activities of cytochrome c oxidase and ATPase were measured within 6 h after isolation of mitochondria.

Ten micro-liter of isolated mitochondria (4 mg/mL) and 1 mL of 10% TCA were mixed in Eppendorf tubes at 37 °C for 60 min, and the reaction was terminated by incubation in ice. Then 250 μL of 0.02 mol/L ATP-Na2 and 100 μL of 0.05 mol/L MgCl2 were added respectively, and the reaction was ended by adding 1 mL of 10% TCA after 5 min at 37 °C, followed by centrifugation at 3000 rpm for 15 min at 4 °C. The contents of inorganic phosphorus in supernatants representing ATPase activity were determined[18].

Data were expressed as mean ± SD. To analyze the data statistically, student’s t test was used to determine statistical differences, and P < 0.05 was considered significant.

After treating with hydrogen peroxide, no significant changes of house-keeping gene β-actin mRNA could be observed, indicating its value as an internal control (Figure 1). 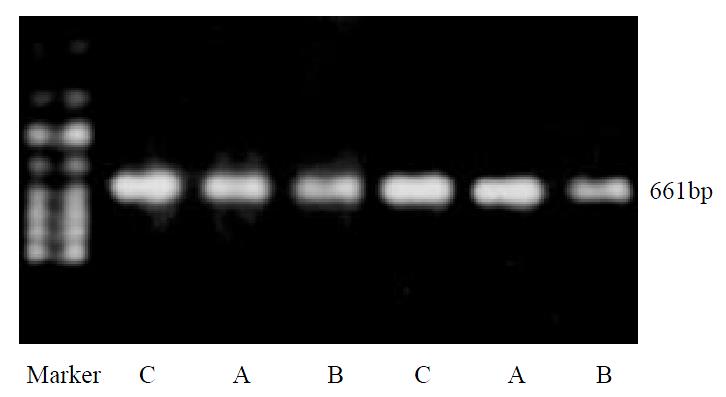 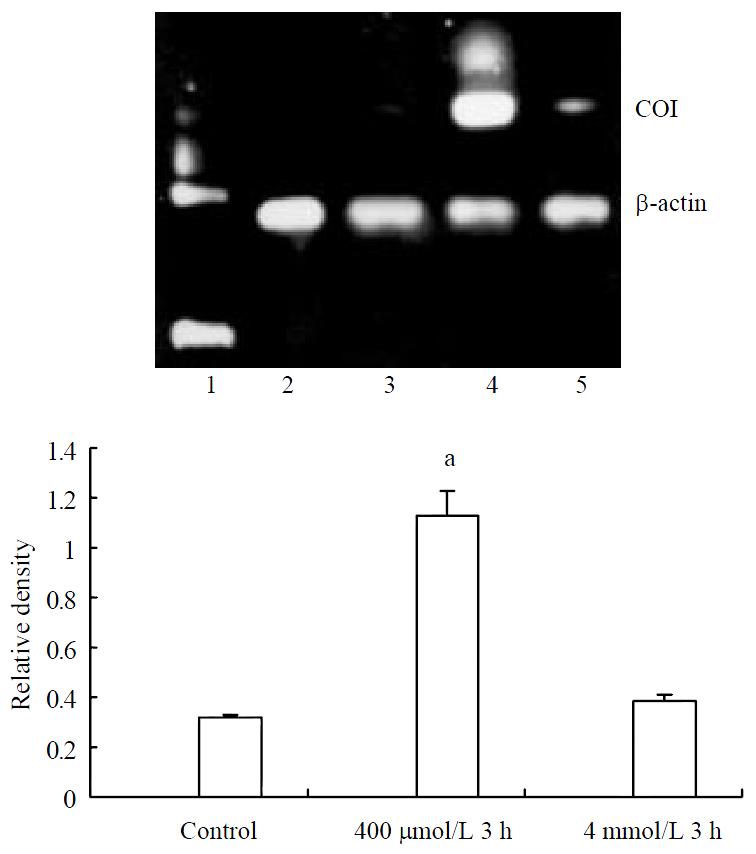 Weak expression of COII mRNA was found in control cells. Significant increase could be found in both 400 μmol/L and 4 mmol/L hydrogen peroxide-stimulated cells (Figure 3). 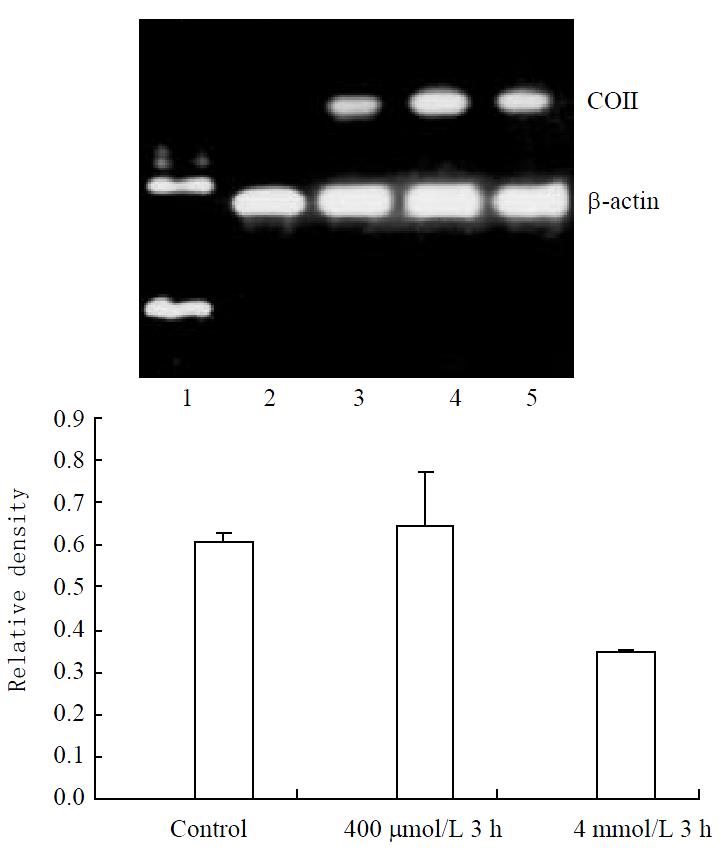 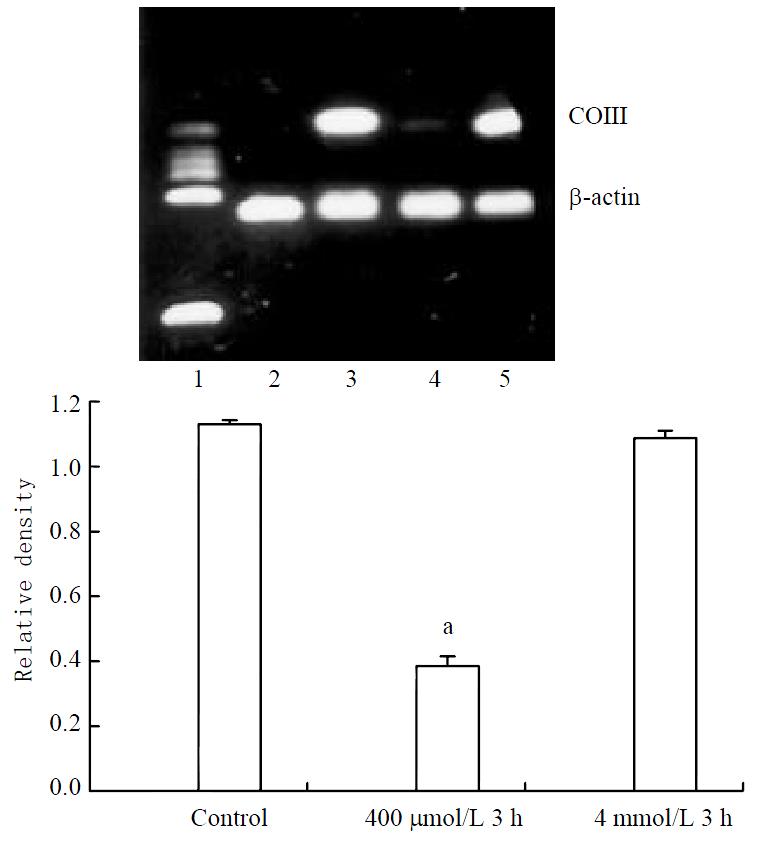 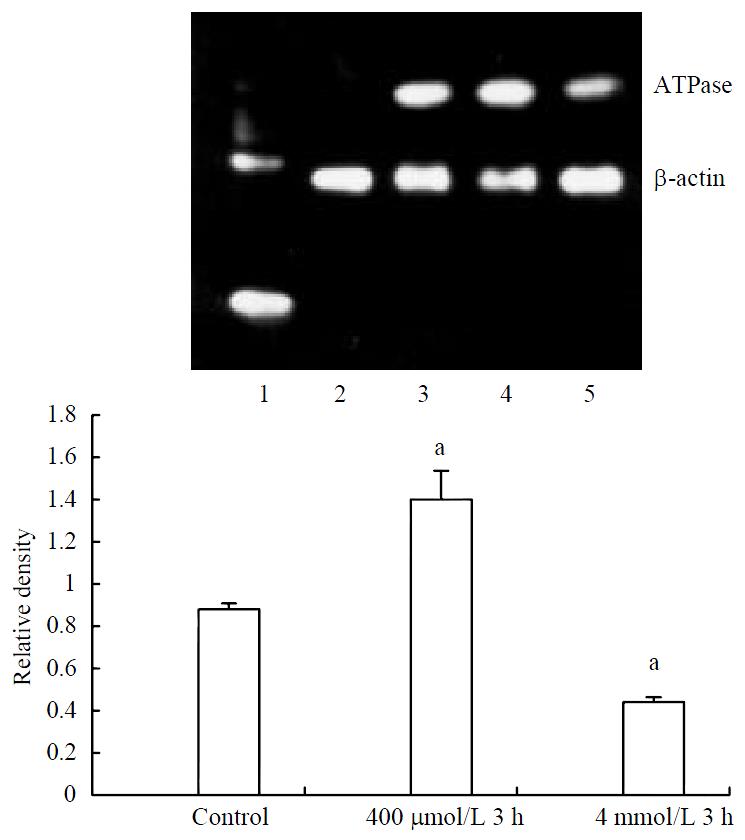 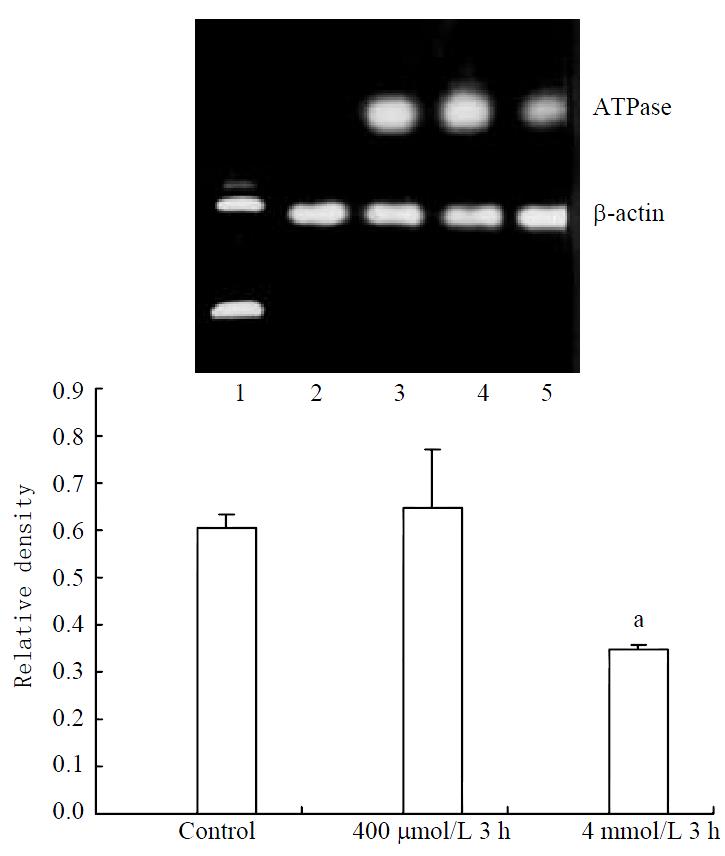 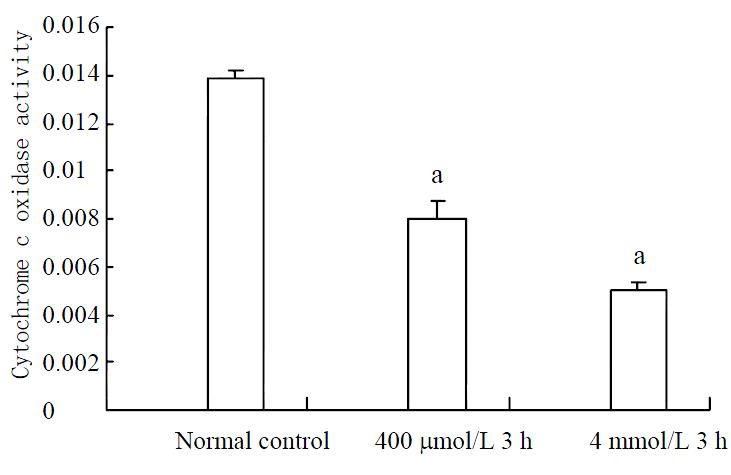 Although only ATPase activity in 4 mM hydrogen peroxide-stimulated cells decreased significantly on the view of statistics, the trend is very obvious (Figure 8). 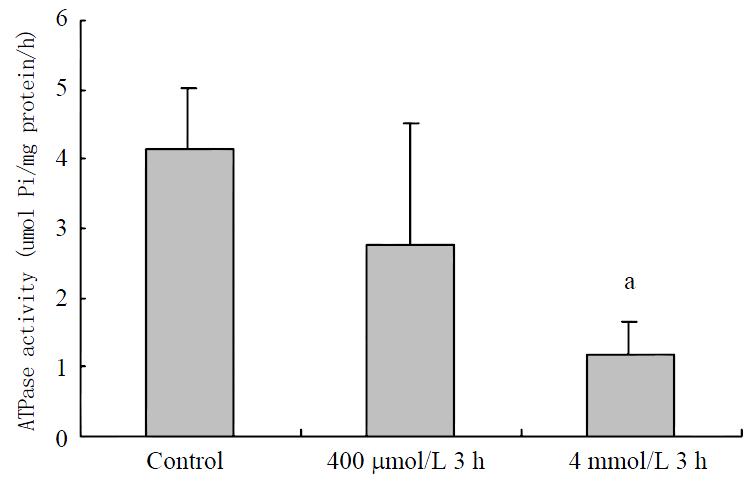 The role of mitochondrion in the pathogenesis of apoptosis has been well defined. Mitochondrion, a kind of organelle controlling growing, breeding and dying of eukaryocyte, embodies its functions through: (1) production of ATP; (2) production of ROS, which regulates nuclear gene expression; (3) link between cytoplasm and nucleus; (4) sensitive response to stimulator or signals outside cytoplasm; (5) triggering of cell death[19,20]. Evidences show the central role of mitochondria in the development of apoptosis. Many stimulators like ROS, Ca2+ and cytokines lead to activation of caspases by inducing release of cytochrome C and thereby trigger a cascade in apoptosis[11].

Meanwhile we also found a large scale of point mutation of mitocondrial gene such as ATPase8 subunit in 4 mmol/L hydrogen peroxide treated SW-480 cells, suggesting its correlation with down-regulation of ATPase expression.

It is considered now that the mitochondrial permeability transition (MPT) plays a key role in the pathogenesis of apoptosis and necrosis[35-38]. If MPT initiates rapidly with depletion of ATP, cells undergo necrosis, and if MPT occurs without depletion of ATP, cells evolved into apoptosis. So we may conclude that complete inhibition of ATPase would lead to necrosis and partially inhibition of ATPase would lead to apoptosis. Consistent with this conclusion, our study proved a partially inhibition of ATPase in both 4 mmol/L and 400 μmol/ L hydrogen peroxide-treated SW-480 cells, suggesting its potential role in apoptosis. But there are still many problems to be clarified, including the relationship between different expressions of mitochondrial genes, activities of cytochrome C oxdiase and ATPase, oxidative phosphorylation and regulation of apoptosis.

Studies including ours showed that mitochondrial genes played the role in apoptosis. To establish mtDNA deletion cells (ρ0 cells) provided in our studies more direct evidences[39-42].