METHODS: 51 cases of moderately differentiated HCC were analyzed with respect to the relation between their clinical follow-up data and pathological characteristics. Meanwhile, PCNA-LI of HCC cells was detected by immunohistochemistry assay and DI was measured by Feulgen staining and automatic image analysis technique.

RESULTS: Patients with a single tumor nodule, less than 5 cm in diameter, no tumor emboli, no daughter nodules and necrosis had relatively better prognosis; patients with euploidy HCC had better prognosis than those with aneuploidy; among the aneuploidy patients those with DI < 1.5 had better prognosis than the cases with DI > 1.5; The higher the PCNA-LI, the worse would be the prognosis. The increase in DI was correlated with the increase in PCNA-LI, and both of them were correlated with the pathological changes of the tumor.

CONCLUSION: A composite analysis of the pathological characteristics of tumor tissue, DI and PCNA-LI might be useful in predicting the prognosis of HCC patients.

Hepatocellular carcinoma (HCC) is one of the most common malignant tumors in the world. Since 1990s HCC has become the second killer in various cancers in China[1]. Metastasis and recurrence of the neoplasm after surgical removal is still high. The frequency of 5-year recurrence after radical resection is 61.5% overall[2]. So the knowledge of the indexes related to recurrence and survival is very helpful in predicting the prognosis of patients with HCC and to make decision on adjuvant therapies for those patients. It has been generally accepted that the degree of differentiation of tumor cells is one of the most important aspects affecting the prognosis, but even among patients of a similar differentiation of HCC, the survival period is quite different. To explore this difference, we analyzed 51 cases of moderately differentiated HCC with respect to their clinical follow-up data, the histopathological characteristics, proliferating cell nuclear antigen labeling index (PCNA-LI) and DNA index (DI). We expected to find some simple and applicable indexes for estimating the prognosis of HCC by examining the surgical specimens of HCC.

Formalin-fixed and paraffin-embedded HCC tissues blocks from 51 cases of patients with moderately differentiated HCC, the clinical data, data of the specimens (tumor size, portal vein tumor emboli, daughter nodules and so on) and follow-up data (including ultrasound examinations of liver every half a year after surgery) were collected in Zhongshan Hospital affiliated to Fudan University during 1989-1990. We used tumor-free survival (TFS) to estimate prognosis in order to eliminate the affection of various therapies after tumor recurrence. TSF was recorded dating from the time of operation, up to the time of death or detection of HCC recurrence by ultrasound examination. The follow-up ended in December, 1999 (2 cases were lost to follow up at 67, 88 months respectively). The TFS time ranged from 8 days to more than 129 months. The probability of 1-year TFS was 62.7%, that of 3-year TFS was 35.3% and that of 5-year TFS was 27.5%. 8 cases had no recurrence and were still alive at the end of the follow-up.

4 μm tissue thick sections were cut from each block and stained with hematoxylin-eosin. We examined morphological characteristic and arrangements of tumor cells, infiltration of mononuclear cells in the stroma, tumor capsules formation and its thickness, state of tumor cells invasion, and tumor emboli and microscopic daughter nodule in vein around the cancer. The infiltration of mononuclear cells was graded as follow: 0, none or occasionally found; 1, diffuse; 2, crowded together or even lymphoid follicles formed. Tumor without capsule was defined as tumor tissue directly bordering on normal liver tissue. If ten or more layers of stratified fibrous collagen together with fibroblasts separate them, it was defined as thick capsule; less than this was defined as thin capsule. The diameter of cancer was indicated with geometric mean of three-dimensional parameters of single cancer nodule and cube root of total volume of multiple ones.

Formalin-fixed and paraffin-embedded liver tissue sections of 4 μm thickness were dewaxed in xylene and graded alcohols, hydrated, and washed in phosphate-buffered saline. The endogenous peroxidase was inhibited by 0.6% H2O2 for 30 min, and the sections were incubated with normal goat serum (1:20 for 20 min). A 1:40 diluted rabbit polyclonal antibody to PCNA was applied 1 h at 37 °C and then at 4 °C overnight in a moist chamber. Phosphate-buffered saline replaced the first antibody as blank control. A standard avidin-biotin peroxidase technique (ABC assay) was applied. Briefly, biotinylated goat anti-rabbit Ig and avidin-biotin peroxidase complex were applied for 1 h each, with 15 min washing in phosphate-buffered saline. The reaction was finally developed with 3-3’ diaminobenzidine solution in 0.003% H2O2 buffer phosphate (PH 7.8) for 10 min. Sections were counterstained with hematoxylin, dehydrated in alcohol, cleared in xylene, and mounted in DPX. The antibody and ABC kit were purchased from Dako Co. Copenhagen, Denmark.

To get average positive level of each case, six microscopic fields of 400 × magnification were selected which included two representative fields each of considerable, medium and a few positive cells. PCNA - LI is the percentage of immunohistochemical staining positive cells in 1000 HCC cells counted. The criterion to evaluate the expression of PCNA-LI was as following:1, > 15% (high); 2, 5%-15% (medium); 3, < 5% (low).

Feulgen staining was applied on 4 μm thick sections, and IMS Cell Analysis System (Shenteng Co. Shanghai, China) was used to detect DNA index. In each case six representative microscopic fields were chosen and the integral optical density (IOD) of 100 discrete HCC cells was measured with lymphocyte nuclei in stroma as diploidy control. Then the DNA index was automatically calculated.

SPSS for windows 10.0 software was used in statistical analysis. Data were expressed as means ± SD in the presence of continuous variables and as counts (percentages) for the categorical variables. Continuous variables were compared with the student t test, and categorical variables were compared with χ2 test. The probability of TFS time was calculated using the Kaplan-Meier approach and differences between survival curves were tested by the Log-rank test. 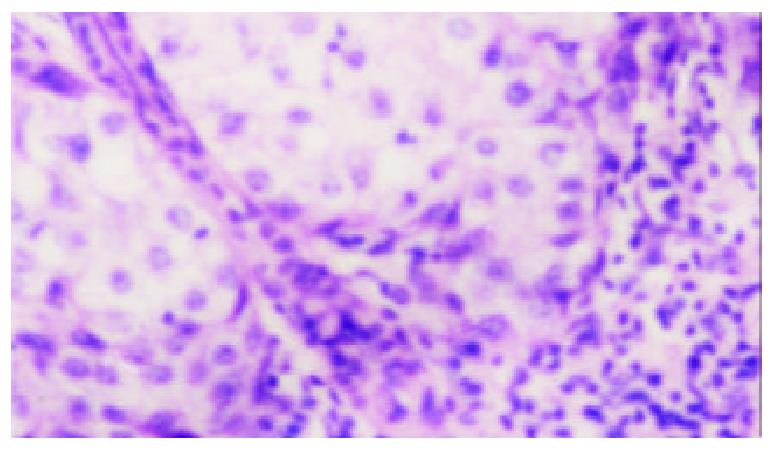 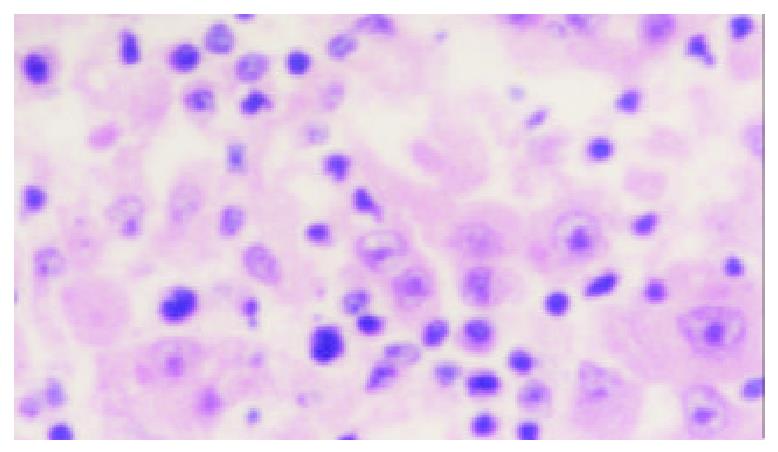 PCNA positive granules were found in the nuclei, and all cells with recognizable nuclear stain were considered as positive. PCNA positive cells were mainly distributed in the peripheral area of tumor nest and also in tumor emboli and at the site of HCC invasion (Figures 3, 4 and 5). The prognosis in the case with higher PCNA-LI was worse, P < 0.01 (Figure 6). With a higher PCNA-LI, the tumor size was usually larger and the probability of tumor emboli, daughter nodules and tumor necrosis was also higher (P < 0.05, Table 2). 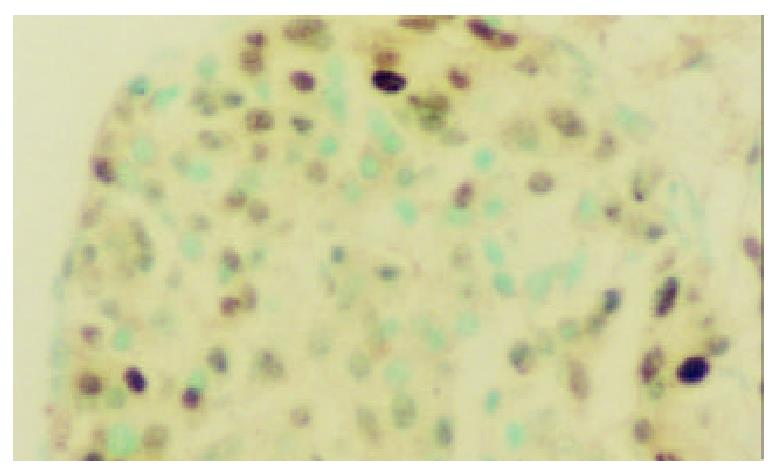 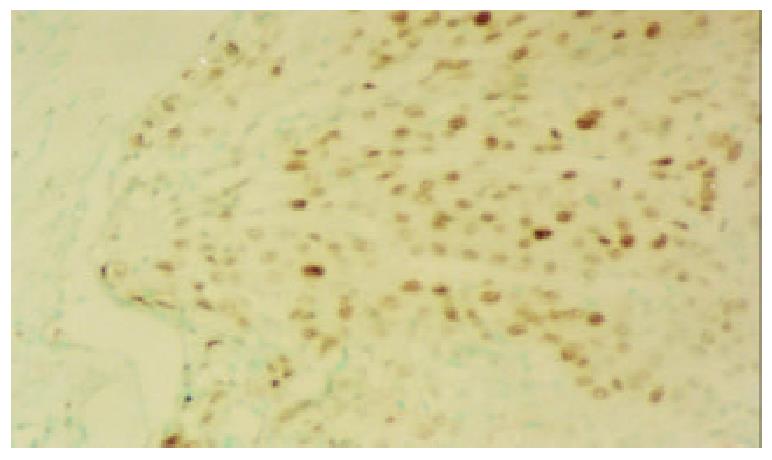 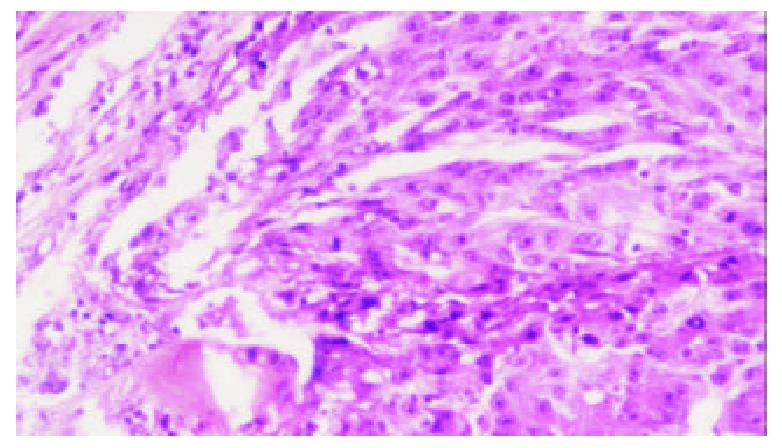 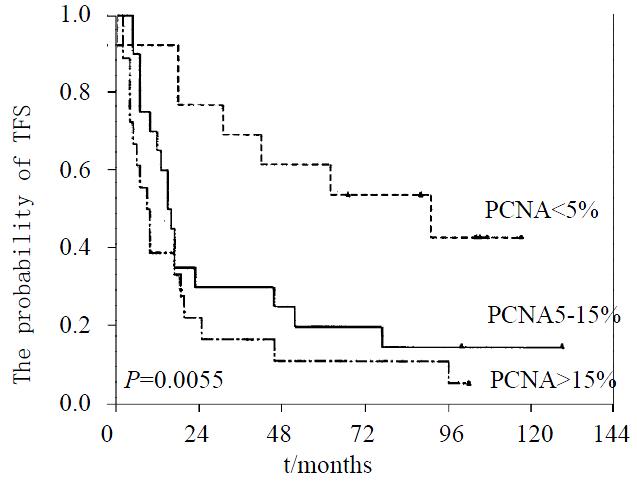 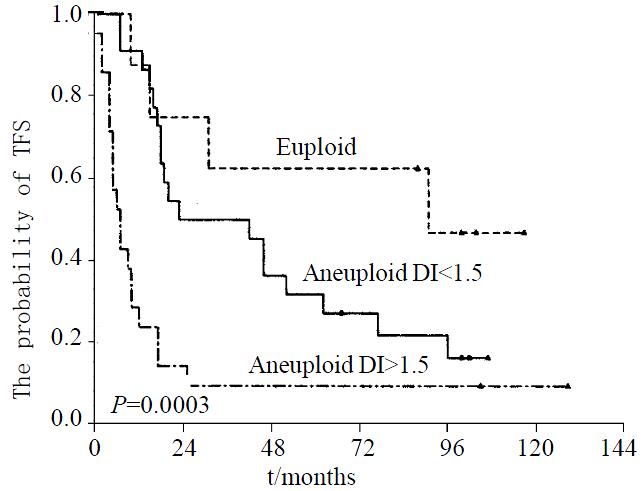 According to pathomorphological inspection of HCC, the TFS of patients with single tumor nodule (diameter ≤ 5 cm, no tumor emboli, no daughter nodules and tumor necrosis) was obviously high and these factors are indicators of better prognosis, which are consistent with results of other retrospective researches[3-6]. The mononuclear cells reaction may represent the response to local irritation by the tumor, but it also may be a host immunological defense mechanism aganinst the neoplastic process.Tumor-infiltrating lymphocytes are important in immunotherapy for tumors[7-9]. The presence of collagen I and III in tumor tissues may inhibit tumor cell infiltration and metastasis and such patients may have a better prognosis[10]. The expression of MMPs (a matrix-degrading enzyme family) in tumor and its relation to prognosis is one of hot points in tumor research[11-16]. Our studies also implied that patients with more mononuclear cells infiltrating in the tumor and surrounding tissue had better prognosis, and those with a thick capsule also had a longer TFS, though the differences were not statistically significant because of small number of cases.

Detection of DNA content and ploidy of tumor cells is still a common method to evaluate tumor malignancy and patient’s prognosis[17-22]. Our studies demonstrated that the prognosis of patients with euploidy HCC was better than that of patients with aneuploidy HCC, and in the latter the prognosis of DI < 1.5 cases was better than that of DI > 1.5 ones. In aneuploidy, DI = 1.5 seemed to be a borderline, and the probability of 3-year TFS in DI > 1.5 cases (13.6%) was obviously lower than in DI < 1.5 cases (52.4%, P < 0.01).

PCNA, auxiliary protein of DNA polymerase delta, accumulates in the nuclei during the S-phase of the cell-cycle, i.e, proliferating cells[23]. PCNA-LI can explicitly reflect proliferating degree of tumor. It was reported that PCNA-LI > 2.0% was the strongest independent predictor of HCC in patients with compensated cirrhosis[24]. Previous research found that PCNA-LI was closely related with HCC differentiation, but others reached a conclusion that PCNA was not related with patients survival[25]. We found that PCNA-LIs were very different even in the similar moderately differentiated HCC cases, and the prognosis was worse in patients with higher PCNA-LI, and the probability of 5-year TFS in PCNA-LI > 15% group was only 11.1% which was far lower than that in PCNA-LI < 5% group (61.5%, P < 0.01). Closset el at reported that PCNA-LI < 30% appeared to be a good prognostic factor in patients without cirrhosis[26]. Besides differentiation of HCC, the difference of PCNA-LI borderline is most closely due to fields selection. We noticed that PCNA positive cells often mainly distributed in the peripheral area of tumor nest and also in tumor emboli and at the site of HCC invasion, while seldom in the middle of tumor nest. Such uneven distribution caused difficulty in selecting fields for immunohistochemistry. We applied an objective way to solve the problem: firstly, we went over the whole section, then selected six microscopic fields of 400 × magnification, including two representative fields for each one of a considerable number, medium and a few positive cell areas, and finally calculated positive ones in 1000 tumor cells.

Both PCNA-LI and DI can reflect the degree of tumor proliferation[19]. Studies in 51 cases HCC showed a certain relationship between them: the PCNA-LI in aneuploidy group was higher than in euploidy group, and a higher PCNA-LI had a higher proportion of aneuploidy. In 18 cases with a high PCNA-LI not a single case of euploidy was detected and the proportion of DI > 1.5 aneuploidy was also high (P < 0.05). However, it should be pointed out that merely judged by PCNA-LI or DI a few exceptions were found, for example, the TFS of 2 cases in the high PCNA-LI group was more than 5 years and one of them was still alive at the end of follow-up, and similarly 2 cases in DI > 1.5 aneuploidy group were alive at the end of follow-up. But all 13 cases with high PCNA-LI and DI > 1.5 aneuploidy had bad prognosis. So we consider that PCNA-LI and DI should be applied together in evaluating HCC patient’s prognosis.

Surely other indexes, for instance, microvessel density, etc, are also helpful for evaluating prognosis through pathological examinations of HCC surgical specimens[2,27-30]. We believe that a composite prospective analysis of the pathological characteristics of tumor tissue, DI and PCNA-LI is a simple and objective means to evaluate the risk of recurrence and prognosis for those patients with HCC after surgery.