Citation of this article
Niu ZS, Li BK, Wang M. Expression of p53 and C-myc genes and its clinical relevance in the hepatocellular carcinomatous and pericarcinomatous tissues. World J Gastroenterol 2002; 8(5): 822-826

METHODS: The expression of p53 and C-myc genes was detected immunohist-ochemically in 73 and 60 cases of HCC and pericarcinomatous tissues, respectively.

Primary hepatocellular carcinoma (HCC) is one of the most common malignant tumors in China[1-11], and the incidence of HCC reported has apparently increased in recent years. Despite a variety of therapeutic strategies, HCC remains a significant cause of cancer death. Therefore, to study the HCC pathogenesis is of the utmost importance to the prevention and treatment of this disease. With the advancement of HCC study, it becomes clear that the biologic behavior of HCC is closely related with the overactivation of the oncogenes and the inactivation of the tumor suppressor genes[12,13].

In the present study, the immunohistochemical LSAB (labelled streptavidin biotin) method was used to detect the expression of p53 and C-myc genes in HCC and pericarcinomatous tissues, in order to investigate the possible roles of these genes played in the HCC carcinogenesis, and to find out the relationship between the liver hyperplastic nodule and HCC. In addition, the relationship between the expression of p53 and C-myc genes and clinicopathological parameters of HCC was preliminarily investigated.

All specimens were routinely processed, alcohol-fixed and paraffin-embedded. Serial paraffin sections of 4 um thickness were cut and used for hematoxylin and eosin (HE) and immunohistochemical stains. Immunohistochemical LSAB method was used to detect p53 and C-myc genes. Anti-p53 monoclonal antibody DO-7, anti-C-myc monoclonal antibody and LSAB kits were purchased from Dako Co. Before staining, the sections were heated with microwave in 0.05 mol·L-1 citric acid solution for antigen retrieval. In each staining, a known p53 or C-myc positive section was added as the positive control, and PBS was used as the substitute of the first antibody for the negative control.

Results were analysed by χ² test. Differences at P < 0.05 were considered to be statistically significant.

RESULTS
Expression of p53 gene in HCC and its pericarcinomatous tissue

The positive staining for p53 gene expressed as brown granules, which was mainly located in the cell nuclei of tumor cells (Figure 1). The staining intensity and extent varied among tumors, different tumor regions and individual tumor cells. Immunostaining of p53 protein was negative in all tumor stroma, bile duct epithelia, LC and normal liver tissues. A few p53 weakly positive cells were found in LHN (Figure 2). The significant difference existed between HCC and LHN (χ² value 10.57, P < 0.01), and so did between LHN and LC (χ² value 6.94, P < 0.01) (Table 1). 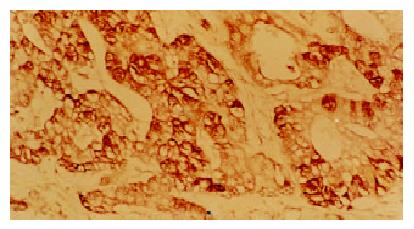 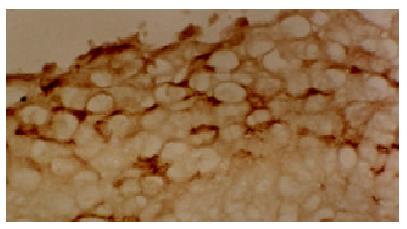 Figure 2 The positive expression of p53 gene in LHN. LSAB × 200
Expression of C-myc gene in HCC and its pericarcinomatous tissue 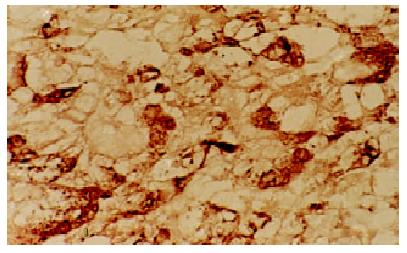 Figure 3 The positive expression of C-myc gene in HCC. LSAB × 200

Figure 4 The positive expression of C-myc gene in LHN. LSAB × 200 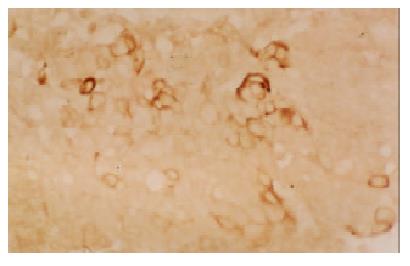 No significant relation was found between p53 or C-myc gene expression and patient age, sex and tumor size (P > 0.05).

The p53 gene is one of the most important tumor suppressor genes determined so far[14-19]. In recent years, it has been found that the p53 protein seems not express in the benign and preneoplastic lesions, and that there was no obvious relation between the p53 protein and carcinogenesis[20]. However, in the present study, the positive rate of p53 protein staining in LHN was 17.9%, which coincided basically with some results in literature[21-25]. The facts that the p53 protein expressed low in LHN and high in HCC, indicate that the high expression of p53 protein is probably associated with the cancerous transformation of hepatocytes, the early event in the carcinogenesis of HCC. It has been proved that wild type p53 protein can induce cell apoptosis whereas the mutant p53 protein can inhibit cell apoptosis and promote cell transformation and proliferation, resulting in carcinogenesis[26-30]; The p53 protein confirmed by immunohistochemical staining was considered as the mutation type[31]; Therefore, we speculate that p53 protein may exert its carcinogenic effect in the early stage of carcinogenesis on hepatocytes by two ways: (1) As described above, the mutant p53 protein might be associated with cell rapid proliferation and cell transformation, which ultimately results in hepatocellular carcinogenesis; (2) with the increase of the mutant p53 expression, and its inhibiting effect on apoptosis there will be an abnormal in cell numbers, which may eventually initiate the hepatocellular carcinogenesis. In addition, our results indicated that there existed a close relationship between the p53 gene expression and tumor cell differentiation in HCC, which suggests that the expression of p53 gene might serve as an index for the judgement of HCC malignant degree and its clinical prognosis.

For many years, it has been generally considered that LC was closely associated with HCC and hepatocarcinogenesis. According to carcinogenic hypothesis on oncogene, at least two activated oncogenes are required-namely, the ras gene which was representative of transforming gene and the C-myc representative of immortalizing gene. Only when the two sorts of oncogenes function coordinately can stock-cultured cells be transformed malignantly. In the present study, we found that the expression rate of C-myc protein in LC was 26.7%, but, the expression intensity of C-myc in LC was significantly less than that in LHN. Our previous studies have indicated that there was no mutation of the ras gene in LC, and that the expression of c-erbB-2 oncogene was negative in LC, indicating that there are no mutation and activation of c-erbB-2 in LC, that is, it is impossible in this situation for malignant transformation. In addition, according to the present study, there was no mutation of p53 in LC, suggesting that LC does not necessarily link with hepatocarcinogenesis. Alcohol is the major cause of cirrhosis in European countries and the United States, responsible for 60 to 70 percent of all cases of cirrhosis, but it only infrequently leads to HCC; carbon tetrachloride can lead to LC rather than HCC. However, the reason why the ratio of HCC accompanied by LC in China is obviously higher than that in European countries and the United States perhaps lies in HBV infections, there is not a cause and effect but a accompanying relationship between LC and HCC. The significance of C-myc expression in LC remains to be investigated.

What requires a special explanation is that the LHN used in the present study is totally different from the nodules in LC. We noticed that though the majority of the LHN developed from LC, it is a cell population that differs from LC in properties and proliferative patterns. Although the liver cell cords in LC are in disarray, the hepatocytes are primarily arranged in a single line, most of which are normal in morphology; However, the hepatocytes in LHN grow by expansion, one nodule primarily contains a sort of cells, and in mixed cell nodules there exists a clear margin between the cellgroups, suggesting the nodules are of clone origin.