AIM: To evaluate the metabolic effects associated with administration of rhGH and/or Gln in parenterally fed, short-bowel rats.

CONCLUSION: rhGH significantly improves the anabolism in parenterally fed. Short bowel rats, anabolic effect with Gln is less dramatic, there is no synergistic effect between rhGH and Gln in improvement of whole body anabolism. IGF-1 plays an important part in growth-promoting effects of rhGH.

Short bowel syndrome follows therapeutic massive small bowel resection, following such surgery, affected patients often require long-term parenteral nutrition (PN) to provide adequate nutrition to meet the needs of the body[1-2]. However, long-term experience with conventional PN is unable to increase or even maintain body protein, the anabolic response to PN is often suboptical because of the concomitant presence of catabolism and/or alterations in the hormonal regulation of metabolism[3-4]. Thus the efficacy of treatment with anabolic opsonins, such as growth factors, glutamine (Gln) is currently under the investigation[5-7]. But few studies have made direct comparisons of the metabolic response to rhGH vs. Gln in the body. The objective of the present study was to evaluate the relative anabolic and metabolic effects associated with administration of rhGH, Gln and the combination of rhGH and Gln during PN in short-bowel rats and to gain insight regarding potential mechanism mediating the anabolic effects of these factors.

Forty male Sprague-Dawley rats weighing 180-220 g were housed and underwent an acclimatization period of 7 d. After overnight fasting, they were anesthetized with 0.5% pentobarbital (40 mg/kg) shortly before surgery. Two operations were performed: 1, placement of PN catheter in the superior vena cava via the external jugular vein; 2, 75% small intestinal resection. After operation, the rats were placed in individual metabolic cages[8].

The experimental design was a randomized complete block with four treatment groups arranged in a 2 × 2 factorial design as follows: -rhGH, -Gln; -rhGH, +Gln; +rhGH, -Gln; +rhGH, +Gln. The final sample size was 10 rats per group. In addition, an orally fed, nonoperated, age-matched group (n = 8) was included to serve as reference for determination of net changes in total body content of protein, water and fat. After surgery, on day 0 only saline was provided through the catheter. From day 1 to day 6, PN solution was given and water was provided ad libitum. Rats received rhGH and/or Gln for 6 d, during which PN provided the sole source of nutrition.

At the end of the experiment, the rats were reanesthesized and laparotomy was performed under sterile conditions. Blood was collected by cardiac puncture, and thymus, heart, lung, spleen, liver, kidney, adrenal, testis and gastrocnemius muscles were dissected, weighted, frozen and stored at -70 °C. The entire gastrointestinal tract was removed, flushed with cold saline, the wet weight of stomach, remnant small intestine (from pylorus to cecum), and cecum was recorded. The length of remnant small intestine segment was also determined. After removal of the above tissues, carcass weights were recorded and carcasses were stored at -70 °C for body composition analysis.

rhGH (Saizen) was provided by Serono Singapore Pte. Ltd, Singapore. The dose of rhGH was 1 U/kg·d (0.33 mg/kg·d) administered once a day as a subcutaneous injection over a hind limb beginning on day 1 and continued for 6 d. Sham saline injection was given to rats not treated with rhGH[9].

The PN solution was prepared aseptically using 7% Vamine (SSPC), 50% dextrose, 20% Intralipid (SSPC), vitamins, trace elements and electrolytes. Gly-Gln (Pharmacia & Upjohn Co. Germany) was added to the Gln-PN solution and Gly-Ala-Ser-Pro was added to the standard PN solution to equalize the total nitrogen to 8.62 g/L in both solutions. All rats received 166.4 Kcal/kg·d and 1.4 g N/kg·d parenterally with an infusion pump. Compositions of the Gln-PN and standard PN are shown in Table 1.

Data were analyzed by one-or two-way analysis of variance (ANOVA) using the Stata 5.0 program. The four PN groups in the factorial arrangement were compared in a two-way ANOVA, the reference group was excluded from the two-way ANOVA. Group means determined by the least-significant difference technique were considered significantly different at P < 0.05. Values were expressed as means ± SE. 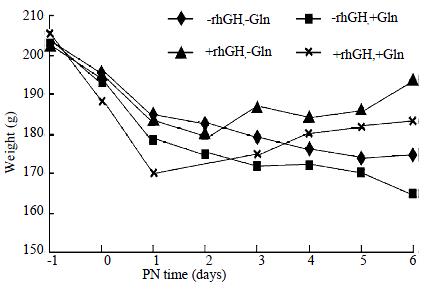 Figure 1 Daily changes in body weight in rats with PN. 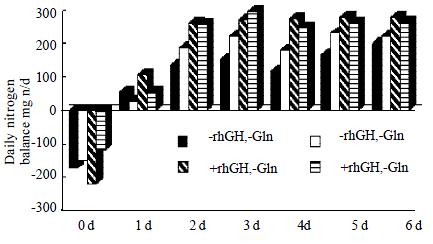 The absolute weights of thymus, heart, lung, liver, spleen, stomach, remnant small intestine, cecum, kidney, adrenal, testis and gastrocnemius muscles are shown in Table 3. Treatment with rhGH significantly increased the absolute weight of the gastrocnemius muscles compared to those not given rhGH, P < 0.01, whereas Gln showed no significantly effect on the weight of this muscle tissue, P > 0.05, there was no evidence of an additive effect of rhGH and Gln on the weight of gastrocnemius muscles. Although rhGH or Gln didn't affected the absolute weight of the remnant small intestine, the ratio of weight/length was greater in rats treated with Gln, rhGH and rhGH + Gln than those with PN alone (2-way ANOVA contrasting 4 experimental groups, P = 0.019, 0.012 and 0.018 respectively), there were synergistic effects between rhGH and Gln in the increase of the weight/length of the remnant small intestine. Lung, liver and spleen weights were increased in rats treated with rhGH, others were not significantly affected by rhGH and/or Gln, P > 0.05. 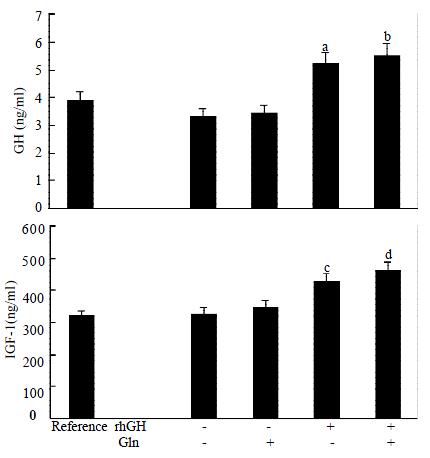 Massive small bowel resection results in a marked decrease in the total surface area available for the absorption of luminal nutrients[14,15]. Affected patients often require long-term parenteral nutrition to provide adequate protein, energy and other essential nutrients to meet the needs of the body[16]. Although this approach attenuates protein losses, PN alone is often unable to increase or even maintain body protein[17], thus administration of rhGH and Gln have been of great interest in both of human and animal research in recent years[18-23]. Our experimental design provides new information about the relative anabolic and metabolic effects of rhGH vs Gln and about interactive effects associated with simultaneous administration of these factors during PN.

Changes in body weight and nitrogen balance reflect the efficacy of PN[24]. We find in our study that PN alone doesn, treserve the weight loss and nitrogen catabolism induced by short-bowel. Coinfusion of rhGH in short-bowel rats significantly reduced the weight loss and nitrogen catabolism as demonstrated by a significantly decrease in nitrogen excretion and significantly greater weight gain compared with rats without receiving rhGH, there is no significant difference between rats with rhGH and with rhGH+Gln. The anabolic effects of Gln in rats given PN without rhGH were less dramatic compared with rats with PN alone in terms of increased weight gain and decreased nitrogen excretion. Body composition analysis further confirmed that increases in carcass weights and nitrogen retention with rhGH were due to retention of carcass protein rather than fat or water retention. Gln had no significant effects on body composition. Our results demonstrated that the administration of rhGH could result in significant anabolic effects on body growth and improve the efficiency of PN.

GH is anabolic in protein metabolism[25-27]. Treatment with rhGH significantly increased the absolute weights of gastrocnemius muscles compared with those not given rhGH, whereas weights of thymus, heart, kidney, stomach, remnant small intestine, cecum, adrenal, testis were not affected by rhGH. Gln showed no significant effect on the weight of tissues mentioned above. This specific anabolic effects of rhGH may reflect differences in the distribution of GH receptors within various organs and tissues[28,29]. As skeletal muscle is the main effectors of GH action[11], stimulation of rhGH on skeletal muscle is more prominent compared to other organs. In our experiment, although we didn's observe a rhGH and/or Gln effect on weights of small intestine, the ratio of weights/length of small intestine increased with rhGH and/or Gln administration, there is evidence of synergy, i.e., statistical interaction, between rhGH and Gln. Our studies of adaptation of the remnant small intestine in short-bowel rats also supported a synergistic response to rhGH and Gln[8]. Gln is the principal fuel utilized by the small intestine and is an essential precursor for purine and pyramiding synthesis required for DNA biosynthesis and cell division in the intestinal mucosa[30-32], Thus a constant supply of Gln to the intestinal mucosa in short-bowel is required and mandatory[33-35]. GH is another growth factor that may influence compensation of the small intestinal remnant[36-38]. Although opinions differ[39], GH is supposed to vigorously stimulate intestinal adaptation, it is suggested that GH takes part in the maintenance of the structure and function of the intestinal mucosa[40-42]. This study provides additional evidence that simultaneous treatment with rhGH and Gln is more anabolic than administration of either rhGH or Gln alone in the remnant small intestine. In addition, in our study we find liver, spleen and lung weights increased with rhGH, but as the weight of these organs were easily affected by the deposited blood, further research is still needed to understand the effects of rhGH on these organs.

IGF-1 is an important peptide growth factor[43]. GH induces IGF-1 synthesis in the liver, which is thought to be the primary source of circulating IGF-1, and in many tissues with GH receptors including intestinal tissues[44-48]. IGF-1 has diverse regulatory functions, including stimulation of DNA and RNA synthesis, tissue amino acid uptake, and cellular protein accrual[49-51]. In our studies, circulating GH and IGF-1 concentrations were increased accordingly in rats treated with rhGH and with rhGH + Gln. However, supplemental Gln alone did not alter circulating GH or IGF-1 concentrations. Given the current experimental conditions, we may confirm in our study that the growth-promoting effects of rhGH are due to induction of IGF-1 production, enhanced IGF-1 synthesis contributes to the anabolic effects of rhGH.

In summary, our results indicate that treatment with rhGH during PN produced a whole body growth response that appeared to be mediated by greater concentrations of IGF-1, action of Gln is less dramatic, and there is no synergistic effect on the body anabolism between rhGH and Gln.