METHODS: Seventy-five patients with inoperable liver metastases from colorectal cancer were included between March, 1992 and November, 2001. We placed implantable hepatic arterial catheter (HAC) port by laparotomy.5-FU, 1000 mg/m2/d continuous infusion for five days every four weeks, was delivered in the hepatic arterial catheter through the port. Mitomycin C, 30 mg/m2/d infusion in the first day every cycle through the port. Response to the treatment was evaluated by serial determinations of plasma CEA and imaging techniques consisting of computerized tomography and sonography of liver.

RESULTS: Sixty-eight were performed hepatic artery chemotherapy and fifty-six were followed up among seventy-five HAC patients. Twenty-six patients (46.4%) have responded and 4 complete remission were achieved. Eight patients (14.3%) had stable liver metastases. Twenty-two patients (39.3%) were progressed with increased tumor size and number. Twenty-nine patients (51.8%) had a decreased serum CEA level, while 10 patients (17.9%) were stable and 17 patients (30.4%) had an increased serum CEA level. There were no operative death in this series. Complications, which occurred in 18 patients (32.1%), were as followed: hepatic artery thrombosis in 11, Upper gastric and intestinal bleeding in 3, liver abscess in 1, pocket infection in 1, cholangitis in 1, and hepatic artery pseudo-aneurysm in one patient.

CONCLUSION: Combined infusion of 5-FU and mitomycin C by hepatic artery catheter port is an effective treatment for liver metastases from colorectal cancer. The high response and lower complication rates prove the adjuvant treatment of colorectal cancer with this treatment.

Colorectal cancer is one of the leading causes of cancer-related mortality in China[1-29]. Approximately half of the patients undergoing apparently curative resection will die within 5 years because of recurrent disease, mostly with liver metastases[30]. Liver was the only site affected in 50% of these patients. Synchronous hepatic metastases are detected in 20% of patients under bowel resection, while metachronous disease occurs in another 30%[31-33]. However about 5%-20% of patients with colorectal hepatic metastases undergo resection with curative intention, resulting in a five year survival of 20%-40%. The one-year and three-year survivals of untreated patients with liver metastases are 31% and 2.6%, respectively[34-36]. Most liver metastases were unresectable because of the number, size, position of tumors and general conditions unsuitable for liver resection.

Unfortunately, the results of conventional systemic chemotherapy have been disappointing. Single-agent 5-flourouracil (5-FU), which has been used for many years to treat metastatic colorectal cancer, has a response rate of approximately less than 20%. The addition of mitomycin C produces higher response rates with a trend towards increase survival and probably similar results can be achieved with high dose 5-FU alone[37,38].

As most drugs have a steep dose-dependent curve, it is a basic pharmacokinetic principle that if one can increase drug delivery to tumors then increased response rates can be achieved. An alternative approach to the therapy of liver metastases is therefore to deliver the drug intra-arterially[39,40]. Hepatic artery catheter chemotherapy is a therapeutic possibility for unresectable liver metastases for many years. The rational for Hepatic artery catheter chemotherapy is based on the fact that liver metastases over 1 cm derive most their blood supply from hepatic artery. The other rational is the high first pass hepatic extraction of the drug used for this approach. Both factors make high local drug concentrations with reduced systemic toxicity and allow treatment with relatively high dosages compared to intravenous treatment[41,42].

We report our experience of an intra-arterial combined use of 5-FU and mitomycin C in patients with unresectable colorectal liver metastases. The aim of this approach was firstly achieve high response with combination of drugs.

Seventy-five patients (43 male, 32 female) with a median age of 58.3 years (range 31-76) with multifocal colorectal metastases confined to the liver and not suitable to surgical resection and other regional ablation which include radio frequence ablation, ethanol injection, cryotherapy and laser ablation, were included in the study between January 1992 and November 2001. Seventeen patients had synchronous and 58 patients had metachronous liver metastases. Preoperative assessment included computerized tomography (CT) scan of abdomen and pelvis, either radiographic or CT examination of the chest and colonscopy of bowel to exclude extrahepatic disease. Some patients were undergone Positron Emission Tomography (PET) recently. Selective superior mesenteric angiography was performed before surgery to define hepatic arterial anatomy in some patients. Histological confirmation of the presence of liver metastases was obtained by ultrasound guided fine needle biopsy or fine needle biopsy in laparotomy before implantation of hepatic artery catheter port. Blood test including hematology, liver function, renal function and CEA were performed before operation.

Patients underwent a laparotomy and the hepatic artery catheter (HAC) was positioned in the ligated gastroduodenal artery with the catheter tip located at the junction of the gastroduodenal and common hepatic artery, thereby gaining access to the hepatic arterial flow. The other end was connected to a subcutaneous infusion port placed over the left coastal margin. A cholecystectomy was routinely performed to prevent potential chemical cholecystitis during chemotherapy. Various surgical maneuvers were used in patients with aberrant hepatic arterial anatomy, which include position the catheter in other artery and bypass of hepatic artery with artificial vessels. Adequate perfusion of the liver was confirmed at the time of operation with a test of blue dye. The port was flushed with heparinized saline (1000 μ/mL).

All patients received continuously hepatic arterial 5-FU and mitomycin C perfusion using an ambulatory pump. Patients received 1000 mg/m2/d 5-FU in 12 h for five days every 4 wk. Thirty mg/m2 mitomycin C was perfused in 2 h after the use of 5-FU in first day every cycle. Ten microgram of dexamethasone was given before perfusion everyday. Cimetidine and Losec were prescribed as prophylaxis against gastroduodenal ulceration. Haemological and biochemical toxicity were assessed every 2 wk and graded according to WHO toxicity criteria. In patients with significant side effects, the subsequent dose was delayed until recovery.

Time to progression and overall survival were estimated by Kaplan-Meier survival curves using SPSS. Seven patients, which were not regularly performed chemotherapy due to the toxicity or rejected chemotherapy, were excluded from the study. Twelve patients were not follow up in time and accurately were not included in this study.

Of the 75 patients, four patients rejected intra-arterial 5-FU and mitomycin C chemotherapy. Three patients would not continue the chemotherapy because of the severe toxicity of cytotoxic drugs, although many procedures were performed. During 68 patients who continued at least 6 cycles of chemotherapy, twelve patients were not completely and accurately followed up. So, only fifty-six patients were treated and studied. The median number of cycles received were 10 (range 6-25). Median follow up were 21 mo (range 8-37 mo). Forty-one patients have died till the close day of follow up. Predicted median survival from the time of catheter insertion was 15 mo (Figure 1). 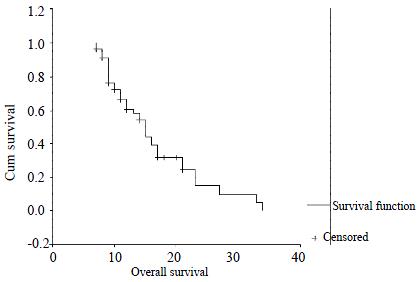 Hepatic artery thrombosis (in 11 patients, 19.8%) is the complications most frequently observed in patients with HAC. The presenting symptoms of this complications were abdominal pain and obstruction of the catheter. It was confirmed by angiography in 6 patients and by Doppler ultrasound examination in 5 patients. Upper gastric and intestinal bleeding were present in 3 patients, which due to perforation of gastric and duodenal ulceration at surgery in 2 patients and duodenal ulceration bleeding at gastroscopy in 1 patient. There were all performed before 1995 when we did not use blue dye. There were one patient presented with high fever after intra-arterial chemotherapy. She was diagnosed liver abscess by CT scan of liver and cured by ultrasound guide drainage. One patients which has a pocket infection has healed after intravenous antibiotics and drainage. One patients with cholangitis has to move the catheter and port. There are still one bleeding ulcer due to hepatic artery pseudo-aneurysm at surgery.

When colorectal cancer metastasises to liver, the prognosis becomes very awful. More than fifty percent colorectal cancer liver metastases patients will died in six months. For this reason, various treatment have been attempted, which include HAC, radio frequence ablation[44], cryotherapy[45], ethanol injection[46], systemic chemotherapy[47] and radiotherapy[48]. As most cytotoxic drugs have a steep dose-dependence response curve: the higher the concentration of the drug, the higher the antitumor effects[39]. Hepatic artery catheter chemotherapy emerged in this condition. Besides this, metastatic tumors in the liver derived their blood supply mainly from the hepatic artery (90%-95%). HAC can directly perfuse the chemotherapy to liver metastases from colorectal cancer. The drugs will result in a prolonged exposure of high concentration to the tumors, while reducing the systemic side effects following the metabolism of the drug in the liver. HAC were undertaken more than 30 years for these reasons[49-51].

In all studies, 5-FU and FUDR were chosen for the arterial route of administration. As 84%-99% of FUDR is extracted by the liver on first pass, it seemed logical to use FUDR to achieve the dual objective of high levels within the tumor and low plasma levels, thereby increasing the probability of the tumor's response while minimizing the systemic toxicity[54]. But 55% of patients using FUDR in the UK and French studies developed extra-hepatic progression, suggesting that these patients may have had occult extra-hepatic disease at the time of entry into the trial or during the intra-arterial chemotherapy. The lower plasma level of drugs have been misplaced. But, 5-FU which has a lower hepatic extraction rather than FUDR, allowed the drug to "spill over" into the systemic circulation[53]. Mitomycin C is also a valuable drug for the systemic chemotherapy in colorectal cancer. In this way, we hoped to maximize the response rates within the liver but also to suppress the development of extrahepatic metastases by combined use of 5-FU and mitomycin C. It seemed likely that both of these objectives could be achieved with a response rate of 46.4%. At the same time, systemic toxicity was relatively mild and no chemical hepatitis or biliary sclerosis developed as that in FUDR.

Imaging and CEA are good markers in follow up of patients. Serum CEA determinations were the most sensitive indicator of tumor regression or recurrence and proceed changes in the imaging test by at least 1-2 mo. Angiography CT (CTA) seems to be the most sensitive to change in tumor size and find new metastases. Sonography is the cheapest way to follow up.

Although there are some complications in HAC, it is still a feasible method for colorectal cancer liver metastases. Most complications was related to the technique of surgery and care of patients[55]. Meticulous attention to ligation of all vessels that would cause gastroduodenal misperfusion can eliminate gastritis, duodenitis, and gastroduodenal ulceration related to HAC chemotherapy[56]. The intraoperative blue injection are necessary to confirm total hepatic perfusion and to rule out any gastroduodenal misperfusion. Gastroscopy investigation of the gastroduodenal perfusion of blue injected through the port is very important before initiating HAC chemotherapy. Displacement of the catheter tip into the hepatic artery often leads to thrombosis of the artery. Dismal migration of the catheter into the gastroduodenal artery may cause vessel or catheter occlusion, hemorrhage, aneurysm, and rupture of the gastroduodenal artery[57]. These complications were all emerged in the early stage of this procedure when we did not have so much experience to avoid these. Liver abscess and infection of port were due to unstrictly sterilize procedure which can be avoided at all.

In conclusion, HAC 5-FU and mitomycin C chemotherapy is better than systemic chemotherapy and other combination of drugs in colorectal cancer liver metastases, which were not suitable for surgery, cryotherapy, radio frequence ablation and other adjunctive therapy, although there are still 39.3% patients progression and some complications, some of them were dangerous.