AIM: To investigate the correlation between subcellular daunorubicin distribution and the multidrug resistance phenotype in drug-resistant cell line SMMC-7721/R.

Multidrug resistance (MDR) remains a significant obstacle for cancer chemotherapy. The MDR observed in many cell lines is most commonly accompanied with overexpression of one or both of the members of the ATP-binding cassette superfamily of transport proteins, P-glycorprotein (P-gp) and multidrug resistance-related protein (Mrp, P190)[1-7]. P-gp or P190 acts as an energy-dependent outward transport pump, removing drugs from the cytoplasm and from the plasma membrane, thereby decreasing intracellular drug accumulation[8-12].

Human hepatocellular carcinoma drug-resistant cell line SMMC7721/R showed a strong multidrug resistance to DNR and other anthracycline, and overexpression of P-gp and P190 was observed in this cell line. Previous studies suggested that subcellular drug distribution contributing to cells drug resistance may be mostly mediated by P-gp and/or P190 in many other cell lines[13-20]. But there is no direct evidence suggesting the role of these two pump proteins in MDR of SMMC7721/R. In order to understand MDR phenotype and mechanism in SMMC7721/R, based on previous studies of antisense technology related to mdr1 gene and mrp gene, we used laser scanning confocal microscopy to evaluate the intracellular distribution of DNR and then explored the correlation of intracellular drug (DNR) transportation and distribution with multidrug resistance phenotype.

Treatment of cells with AS-ODNs

The experimental protocols were similar to those previously described[22,24]. Briefly, cells (5 × 105) were seeded in a 25 mL flask at 1 × 105 cells/mL and grown to 75% confluence. Cells were transfected with 1.5 nmol of AS-ODN with 50 mL of Lipofectamine. Cells were harvested at different times after transfection for analysis.

Detection of drug sensitivity of cells by MTT[25,26]

Cells were exposed to drug at 37 °C for 2 h, then were washed and seeded (50000 cells/mL) in 96-well microplates for 72 h. MTT (20 μL, 2.5 mg/mL) was added to each well for 3 h. Medium was discarded and 150 μL of DMSO were added to each well. Optical densities were measured at 490 nm (A490). The tumor cells living ratio (TCL) was determined according to the formula: TCL = A490experient/A490control× 100%. The 50% inhibitory concentration (IC50) was calculated according to concentration-TCL curve. Resistance index (RI) was calculated using the formula: RI = IC50 drug resisant cells/IC50 parent cells.

Measurement of mdr1 and mrp mRNAs by RT-PCR

β2M expression was used as control for the amount of RNA used. Total RNA from cells was extracted using TRIzol. The effect of AS-ODN was studied after 24 h pre-incubation with AS-ODN and Lipofectamine. Mrp, mdr1, and β2M RNA transcripts were detected using RT-PCR as described before[27,28]. An aliquot of each reaction mixture was then analyzed by electrophoresis on 2% agarose gel. Densitometry was performed using UVP gel image analysis system (BIO-RAD, USA) and the ratio between the target and control PCR products was determined by dividing the densitometric volume of the target band by that of the control band.

The experimental procedures were similar to those previously described[29-31]. Cells (1 × 105) were seeded to 960 mm2 petri dish with a slide inside and incubated in a 5% CO2 atmosphere at 37 °C. After cells had reached 75% confluence, normal medium was replaced with serum-free RPMI 1640 medium and cells were incubated with DNR at 2 μg/mL for 1 h. The effect of AS-ODN was studied after 72 h pre-incubation with AS-ODN and Lipofectamine. After two washes with PBS and addition of drug free medium cells grown on slides were examined with CLSM (MRC-1024ES, BIO-RAD Inc., USA). Cover-slips were mounted on slides, supported and sealed on lacquer tiers to prevent compression and drying out. Intracellular drug fluorescence was observed using the 488 nm laser line for excitation and the filter that allows measurement of emitted light above 515 nm.

Cells (1 × 105) were seeded into 25 mL flask and grown to 95% confluence. They were then dissociated with pancreatin and suspended in serum-free medium. DNR was added to a final concentration of 2 μg/mL and incubated for 1 h at 37 °C. After two washes with PBS each sample was divided into 3 tubes to be analyzed by FCM[32] (Elite ESP, Coulter Inc., USA). Results were expressed as the ratio of fluorescence intensity values between each experimental sample and control sample of SMMC7721/R cells without treatment.

As shown in Table 1, the parental sensitive cells SMMC7721/S were highly sensitive to DNR and ADM. However, the drug resistant cells SMMC7721/R were 88-fold resistant to DNR and 116-fold to ADM, respectively, when compared with SMMC7721/S cells. Resistance index (RI) to DNR and ADM in SMMC7721/R cells co-transfected of AS-ODN/mdr1 (0.5 μmol/L) and AS-ODN/mrp (0.5 μmol/L) decreased from 88 and 116 to 4 and 2.3, respectively. Treatment with separate AS-ODN/mdr1 or AS-ODN/mrp showed a lesser reversal effect on MDR than co-transfection of these two AS-ODNs. Nonsense oligonucleotides did not affect the drug resistance in SMMC7721/R cells. 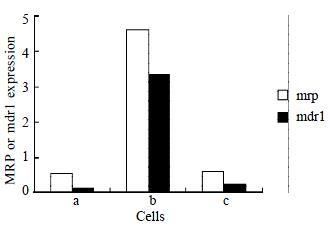 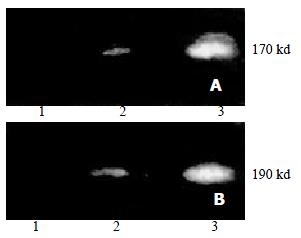 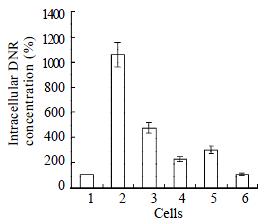 Figure 8 Intracellular DNR distribution in drug-resistant cells SMMC7721/R pre-treated with AS-ODN/mdr1 and AS-ODN/mrp. Each AS-ODN concentration is 0.5 μmol/L and the treatment time is 72 h.

It has been reported that parental SMMC7721 cells have no or low level expression of mdri/P-gp and mrp/P190. However, over-expression of P-gp and P190 was observed in drug-resistant cells SMMC7721/R, which was confirmed in our study.

In order to obtain cell line with different multidrug resistance phenotypes, we made use of the specificity of antisense oligonucleotides in down-regulating gene expression to specifically block mdr1/P-gp or mrp/P190 function. Antisense technology is increasingly becoming a reliable tool for manipulation of gene expression and rapidly moving into the therapeutic arena[33-47]. Down-regulation of expression of mdr1 mRNA/P-gp and mrp mRNA/P190 by AS-ODN was observed and accompanied with recovery of drug sensitivity in SMMC7721/R cells. Drug-resistant SMMC7721/R cells co-transfected with AS-ODN/mrp and AS-ODN/mdr1 showed 50-fold drug sensitivity to ADM, when compared with drug-resistant cells SMMC7721/R.

The fluorescence emitted by anthracycline DNR, a substrate of P-gp and P190, can be detected by FCM and CSLM[14,17,31,48,51]. There is a good correlation between intracellular drug concentration and cells drug sensitivity[8,16,49,50,52,53]. In our studies, FCM data enforced the opinion that reduction of intracellular drug concentration results in increase of drug resistance in cells.

Intracellular DNR concentration in cell line SMMC7721/R decreased to 10 percent of that in SMMC7721/S and meanwhile resistance to ADM and DNR increased by 116 times and 88 times respectively than that of SMMC7721/S. Co-transfection of AS-ODN/mrp and AS-ODN/mdr1 only restored intracellular DNR concentration to 40 percent of that of SMMC7721/S. Inconsistently, the drug resistance to DNR was reduced from 88-fold to 4-fold and to ADM from 116-fold to 2.3-fold when compared with SMMC7721/S. These data indicate that some other factors must play a more important role in MDR mechanism besides the reduction of intracellular drug accumulation. The mechanism focused in recently is modified drug localization[13,51,54]. We used CSLM technology to explore this interesting point.

In our studies, we observed that in cell line SMMC7721/S DNR fluorescence distributed evenly in the nucleus and cytoplasm, while in cell line SMMC7721/R DNR distributed in a punctate pattern in the cytoplasm and was reduced in the nucleus. Transfection of AS-ODN changed the the subcellular DNR distribution pattern in SMMC7721/S cells to that in SMMC7721/R cells. This observation indicates that P-gp or P190 not only pumps DNR out of cells, but also transports DNR from nuclear to cytoplasm and into some organelles such as Golgi apparatus. As P-gp or P190 probably locates in cell membrane, nuclear membrane, Golgi apparatus, or endoplasmic reticulum[13,54-59], the actions of these two proteins may cause reduction of intracellular and intranuclear drug concentration and drug accumulation in some organelles. The combined effect may prevent the targeting of the drugs to nucleus, which reduces cell death even if the total amount of drugs inside the cells was not dropped significantly. Golgi apparatus is widely believed to be the organelle which holds the drugs[54,59]. Previous studies found that there were some differences in subcellular drug distribution pattern between different cell lines in which MDR phenotype was mediated by P-gp and by P190[49]. However, we did not observe such phenomenon in the present study.

Our studies suggest that after the potent inhibition of P-gp or P190 expression by AS-ODN intracellular drug concentration was increased and subcellular drug distribution changed, which leads to the reversal of multidrug resistance in cell line SMMC7721/R. Therefore, we believe that over-expression of P-gp and/or P190 is an important mechanism in mediating MDR in cell line SMMC7721/R.

Although co-transfection of AS-ODNs targeting the two genes didn't enhance the inhibitory effect on expression of P-gp or P190 when compared with separate transfection of either AS-ODN, the synergistic effects of the two AS-ODNs on reduction of intracellular or intranuclear drugs and on recovery of cell drug sensitivity were much more prominent than separate transfection. This finding indicates that MDR in SMMC7721/R is mediated at least by both P-gp and P190. The combination of MDR reversal methods against these proteins is effective in drug-resistant cells.

Author contributions: All authors contributed equally to the work.