AIM: To investigate the effects of IH764-3 on HSC apoptosis, and the expression of caspase-3 protein in HSC apoptotic process.

METHODS: HSCs were cultured in medium with different IH764-3 doses (10 μg·mL-1, 20 μg·mL-1, 30 μg·mL-1, 40 μg·mL-1) and without IH764-3, and HSC proliferation was quantitatively measured by 3H-thymidine incorporation. The morphological changes of HSCs were observed with transmission electron microscope after exposure to the dose of 40 μg·mL-1 of IH764-3 for 48 hr. The apoptosis rates were detected by annexin V/PI and TdT-mediated dUTP nick end labeling (TUNEL). The expression of caspase-3 protein was determined by flow cytometry.

Chinese herbal medicine Salviae Miltiorrhiza, which can improve circulatory status and eliminate stasis, exhibits a series of important pharmacological effects on anti-inflammation, antioxidation, and inhibiting the platelet aggregation[46-49]. IH764-3, extracted from Salviae Miltiorrhiza, preserves all of these beneficial effects. Furthermore, in recent studies, It has been documented that IH764-3 could play an important role in anti-fibrosis, inhibiting the proliferation of HSCs and the synthesis of collagens[47,50]. However, there are few reports so far concerns about the effects of IH764-3 on HSC apoptosis and its mechanisms. In present study, we therefore used annexin-V/PI double labeling flow cytometry, TUNEL and transmission electron microscope to examine the effects of IH764-3 on HSC apoptosis. Meanwhile, the effects of IH764-3 on the expression of caspase-3 protein during HSC apoptosis were also observed.

Inhibition of cell proliferation assays HSCs were plated to triplicate wells in a 96-well plate with the concentration of 5 × 103·mL-1. When the cells were nearly 100% confluent, they were cultured in serum-free medium for 12 hr. Then the medium was replaced with fresh medium containing 2% fetal calf serum and different IH764-3 doses, 1.11 × 104 Bq 3H-Thymidine was added to each well. After 24 hr of incubation, HSCs were collected onto filter membrane and baked 1 hr at 100 °C. The radioactivity (cpm) was determined with the beta-scintillation counter (Beckman). The inhibition of HSC proliferation was expressed by inhibitory rate, which was calculated as: inhibition rate = [(cpm of control group - cpm of IH764-3 group)/cpm of control group] × 100%.

Apoptosis detection The following methods were used to detect apoptosis: (1) Transmission electron microscope: After exposure to the dose of 40 µg·mL-1 of IH764-3 for 48 hr, cells were trypsinized, collected, washed with PBS and centrifuged at 1200 g for 10 min. The cell pellet was fixed in 4% glutaral for 2 hr, 1% osmium acid for 1 hr and dehydrated gradiently, then stained by uranium acetic acid and lead citromalic acid. The cells were observed with transmission electron microscope and the ultrastructural changes were recorded. (2) Annexin-V/PI labeling to detect apoptotic rate[52]:Briefly, the trypsinized HSCs were washed twice with PBS, stained with annexin-V (10 (L) and PI (5 µL) for 10 min, and the apoptotic rate was quantified by FACSCalibur flow cytometry (Becton Dickinso Inc.) at 488 nm wavelength. More than 1 × 104 cells were detected, and the results were analyzed with Modfit LT software. The stained cells were divided into three subgroups: The cells in V-/PI- subgroup were survived cells which membrane was intact, The cells in V+/PI- subgroup were apoptotic cells which membrane intact but with phosphatidylserine translocation; The cells in V+/PI+ subgroup were necrotic cells which membrane was impairment and with phosphatidylserine translocation. (3) Determination of apoptosis by TUNEL method: After trypsinization and collection, cells were fixed with 4% paraformaldehyde for 30 min. Apoptosis was assayed by TUNEL method. Briefly, the cells were incubated with proteinase K (5 µL·mL-1) at 37 °C for 5 min, labeled by TdT and digoxin-d-UTP at 4 °C in a humidified chamber to stay overnight, anti-digoxin antibody was added. After being incubated at 37 °C for 30 min, the cells were stained with diaminobenzidine (DAB). Apoptotic cells presented as brownish stain in the nucleus, but we should pay special attention to distinguish the stained DNA fragments in cytoplasm due to some nuclear leakage. At least 500 cells were examined and the rate of apoptotic cells was calculated as the percentage of stained-cell per 100 cells.

Determination of Caspase-3 expression Trypsinized cells were washed in PBS, and fixed at 4 °C in 70% ethanol overnight. Fixed cells were precipitated and washed in PBS. Cells (6 × 105) were suspended in 0.5 mL permeable buffer diluted by PBS, and subsequently incubated with anti-Caspase-3 antibody, FITC-labled goat anti-rat IgG antibody (1:20)[53]. then cells were washed with PBS, assayed by flow cytometer. The relative quantity of the protein was expressed by Fluorescence index (FI).

Data were expressed as -x±s. One-way analysis of variance was used for multiple comparisons, and Newman-Keuls test and χ2 test were used for intra-groups comparisons. P values less than 0.05 were considered to be statistically significant.

RESULTS
Effect of IH764-3 on proliferation of HSCs

Compared with the control group, IH764-3 had a significant inhibitory effect on 3H-TdR incorporation; the inhibition was dose-dependent (Table 1).

The shape of cells incubated with 30 µg·mL-1 or 40 µg·mL-1 of IH764-3 for 6 hr changed from stellate or shuttle to spherical, and the intercellular space was increased. 12 hr later, the cells began to detach from the plate and it is more remarkable at 24 hr. With the transmission electron microscope, the decreased volume, condensed chromatin and decreased nucleo-cytoplasmic ratio of apoptotic cell were noted. Some cells showed typical apoptotic changes: the pyknosis and margination of the nuclear chromatin. Moreover, the nuclei fragment, annular or crescent body, cytoplasm vacuoles and swellen Mitochondria were also observed. Some cells were karyolysis and turn into the specific apoptotic bodies (Figure 1). 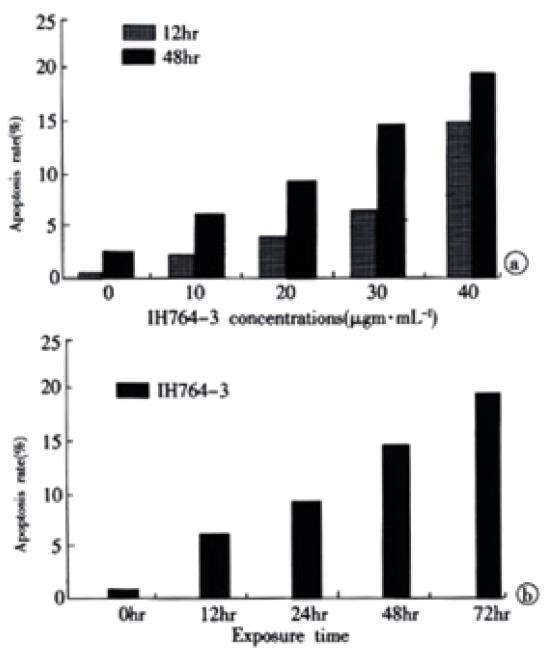 Figure 2 apoptosis rates of HSCs exposed to IH764-3. (A) dose-dependent; (B) time-dependent with the concentration of 30 μg·mL-1 of IH764-3.
Detection of HSC apoptosis by TUNEL

The dynamic balance between the cell proliferation and apoptosis plays a key role in growth, development and maintenance of physiological functions of individuals. Once the balance is broken, varieties of pathological and pathophysical changes will take place. HSCs are the major cells that produce ECM components and proliferated significantly in hepatic fibrosis[36]. It has been considered that apoptosis may play at least a partial role in reducing HSC population and decreasing the production of ECM components in hepatic fibrosis, thus triggering the process of HSC apoptosis is perhaps an important strategy to resolve the hepatic fibrosis[45,54]. IH764-3, an extract of Salviae Miltiorrhiza, has been proved to be an effective agent for anti-hepatic fibrosis in animal model. However, up to the present, whether its anti-fibrotic mechanism was related to the induction of HSC apoptosis or not has not been elucidated yet.

Cell apoptosis, which is different from necrosis, is an initiative cell death process that activates endogenous DNA endonuclease, with the morphological characteristics of pyknosis and the chromatin margination to become lump or crescent bodies. Then cytoplasm condenses and cell shrinks, which finally forms apoptotic bodies. However, the cell membrane is integrated and the organelles keep intact. In present study, a great deal of typical apoptotic cells was found on plates treated with IH764-3, which demonstrated that IH764-3 did trigger the HSC apoptosis.

Apoptosis is a dynamic developing process that can be divided into early phase, metaphase and late phase. It has been reported that flow cytometry is the most sensitive method to examine apoptosis[52,53]. In early apoptotic phase, the translocation of phosphatidylserine, which has high affinity to Annexin-V, from the inner leaflet to the outer layer of the plasma membrane, could be easily recognized by Annexin-V labeling method. Moreover, when combining with PI stain, It could also distinguish from necrotic cells. In this study, we found that IH764-3 could dose-dependently induce apoptosis at 12 and 48 hr timepoints, the apoptotic rate was 2.2% in 10 μg·mL-1 group and 15.1% in 40 μg·mL-1 group. In 30 μg·mL-1 group, the apoptotic rate was time-dependent. In 40 μg·mL-1 group at 24 hr and 30 μg·mL-1 group at 48-72 hr, the apoptotic cells presented progressive worse advanced changes, most of the cells became necrotic, the necrotic rate reached 21.0-31.3%. Similar changes were also observed with transmission electron microscope. Thus it could be concluded that low doses of IH764-3 mainly induced apoptosis, while in high doses, It could not only induce apoptosis, but also necrosis.

The remarkable biochemical characteristic of apoptosis is the genome DNA fragmentation. This is because the activated endogenous endonuclease can degrade the connected DNA between nucleosomes into 180-200 bp oligonucleotide fragments. With terminal deoxynucleotide transferase, utilizing exogenous biotin-labled-free-nucleotides, the free nucleotides in 3 terminal can be catalyzed to get together in a non template-dependent manner, making the break nickings of DNA is labled. Therefore, we used TUNEL method as another way to prove the apoptosis further. The results showed that apoptosis indexes in IH764-3 groups were higher than that of the control, Furthermore, the indexes were dose-dependent in IH764-3 groups. All of the above demonstrated that IH764-3 could induce HSC apoptosis in time and dose-dependent manner, but the signal transduction process remains unclear.

Caspase-3, a key proteinase in apoptosis pathway, is one of the proteases in cysteine aspartic acid specific proteases family, and is also called as cysteine proteases P32. It splits the peptide bond at asparagic residue of specific motif sequence in substrate protein. The activated caspase-3 may cause apoptosis[55] and results in what we saw the apoptotic signs under microscope. Caspase-3 can split inhibitory caspase activated deoxyribonuclease (ICAD) into CAD[56,57], which degrades DNA in nucleus.

The authors wish to thank Professor Greenwel for his kindly providing the cell line and Professor Chun-zheng Yang for presenting IH764-3. We also thank Dr Hong-Qun Liu and Dr Shuang Chen for their critical reading of the manuscript.