CONCLUSION: PKC-α, but not PKC-β I, PKC-β II or PKCγ, may play a role in multidrug resistance of gastric cancer cells SGC7901/VCR.

Multi-drug resistance (MDR), the principal mechanism by which many cancers develop resistance to a variety of chemotherapeutic drugs, is a major factor in the failure of many forms of chemotherapy[1-4]. It affects patients with numerous blood cancers and solid tumors. Cellular drug resistance is mediated by different mechanisms operating at different steps of the cytotoxic action of the drug from a decrease of drug accumulation in the cell to the abrogation of apoptosis induced by the chemical substance. Several different mechanisms will switch on in the MDR cells, but usually one major mechanism is operating. The most investigated mechanisms with known clinical significance are: (1) activation of transmembrane proteins effluxing different chemical substances from the cells, in which P-glycoprotein (P-gp) is the most known efflux pump; (2) activation of the enzymes of the glutathione detoxification system; (3) alterations of the genes and the proteins involved into the control of apoptosis (especially p53 and Bcl-2)[5-12]. PKC comprises a family of at least 13 distinct serine/threonine kinase isoenzymes involved in signal transduction pathways that govern a wide range of physiological processes including differentiation, proliferation, gene expression, brain function, membrane transport and the organization of cytoskeletal and extracellular matrix proteins[13-26]. Recently accumulated evidence indicates that PKC activity, especially cPKC, plays a significant role in the formation of tumor MDR. The isoenzymes possess distinct differences in localization in different cells. Within a single cell, PKC isoforms also exhibit differences in expression and function, so research on distinct function in tumor MDR of isoenzymes has important significance in screening drugs with high specificity that could reverse MDR and in disclosing the mechanism of MDR formation and its regularity of the reversion.

Immunofluorescent cytochemistry The expression of PKC isoenzymes were detected by routine immunocytochemical fluorescence method[27,28].The procedures were as follows. Cells were maintained at 37 °C in a 50 mL·L-1 CO2-humidified incubator in RPMI 1640 medium supplemented with 25 mmol·L-1 HEPES buffer and 100 mL·L-1 new born bovine serum. SGC7901/VCR cells were cultured in the medium with extra adding vincristine at the concentration of 0.3, 0.7 and 1.0 mg·L-1, respectively. Cells at exponential phage were harvested, digested by 2.5 g·L-1 trypsin and then cultured on the slides in the medium described above at 37 °C for further 24 h; RPMI 1640 medium was then washed by PBS and cells were fixed in cold acetone for 5 min; 50 mL·L-1 H2O2 was added and incubated at room temperature for 10-15 min and added 3 g·L-1 TritonX-100 for another 15 min; normal goat serum (1:10) was added and incubated at room temperature for 30 min; rabbit-anti-human polyclonal antibody PKC-α, PKC-β I, PKC-β II and PKCγ (1:100) were added respectively and incubated at 4 °C over night; FITC labeled goat-anti-rabbit IgG was added and incubated at 37 °C for 1 h; the slides were sealed by 500 mL·L-1 glycerin buffer and observed with a fluorescence microscope. Unrelated monoclonal antibody and PBS were used as negative controls.

SDS-PAGE According to Chen et al[31,33] and Xiao et al[32], cells at exponential phase were harvested and washed by cold PBS and suspended in extraction buffer (50 mmol·L-1 Tris-Cl (pH7.5), 150 mmol·L-1 NaCl, 0.2 mmol·L-1 EDTA, 1 mmol·L-1 PMSF and 10 g·L-1 NP-40). The homogenate was heated for 5 min in a boiling water bath and then centrifuged. The supernatants were harvested and the protein concentrations were assayed by Bradford method. 150 μg total protein were electrophoresed on SDS-polyacrylamide gels with the stacking and the separating gels containing 50 and 100 g·L-1 acrylamide, respectively, and the gels were stained with Coomassie brilliant blue dye.

Western blot analysis According to She et al[34], after SDS-PAGE, proteins were transferred onto nitrocellulose membrane under a constant current of mA for 1 h. Non-specific binding sites were blocked by PBS with 50 mL·L-1 milk plus 1 g·L-1 Tween-20 at room temperature. Primary and secondary antibodies were rabbit-anti-human polyclonal antibody PKC and HRP labeled goat-anti-rabbit IgG, respectively. Films were exposed in DAB detection reagent to develop color of bands.

Flow cytometric analysis According to Jiang et al[35] and Feng et al[36], cells were cultured in 6-well culture plates at 37 °C for 48 h, adriamycin was added to the final concentration of 5 mg·L-1. After further culture for 1 h, rabbit-anti-human polyclonal antibody against different cPKC isoenzymes was added and incubated for 40 min, PBS and normal rabbit serum were used as negative controls. And then, cells were harvested or cultured in drug-free medium for another 30 min and harvested. The harvested cells of the phases were suspended in cold PBS, intracellular adriamycin fluorescence intensity was determined by flow cytometric analysis with the stimulative and acceptant wave length at 488 nm and 575 nm, respectively. 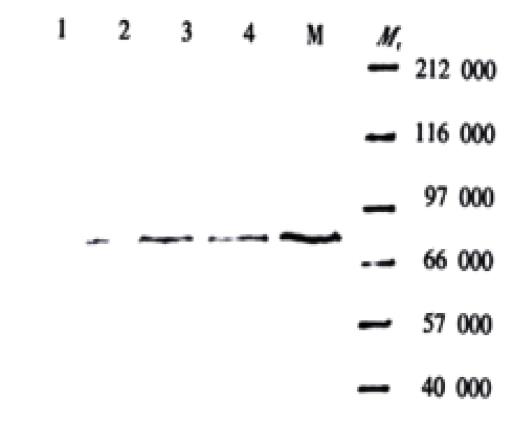 The development of resistance to chemotherapeutic agents remains one of the major obstacles for successful cure of cancer patients. Tumor cells may acquire MDR in the course of exposure to various compounds that are used in modern anticancer therapy, including cytotoxic drugs and differentiating agents. Therefore, the recurrence of the disease after the initial treatment may be associated with establishment of secondary MDR in the residual tumor. Research on resistance to cancer treatment was mainly focused for 20 years on MDR. No useful method of reversing MDR, suitable for clinical use, has yet emerged from this large quantity of work. The reason could be an complicated mechanism involved in it. There are several ways for cancer cells to develop resistance or defense mechanisms against cytotoxic drugs[6,37-42].

Resistance to therapy has been correlated to the presence of at least two molecular "pumps" that actively expel chemotherapeutic drugs from the tumor cells. This action thus spares tumor cells from the effects of the drug, which has to act inside the cells at the nucleus or the cytoplasm. The two pumps commonly found to confer MDR in cancer are P-gp and multidrug resistance-associated protein (MRP). But they can not explicate the phenomenon of MDR fully. It also reported that some cancer cells are resistant to signal of apoptosis and so making cell life longer might confer to the MDR phenotype.

Recent studies have indicated that the signal of phosphorylation might be an important part of MDR mechanisms. PKC isoforms are often overexpressed in disease states such as cancer and play a critical role in regulation of long term cellular events such as proliferation, differentiation and tumorigenesis. An increase in PKC activity might result in an oncogenic role and in MDR. Several studies indicate a role for PKC in the regulation of the MDR phenotype, since several PKC inhibitors are able to partially reverse MDR and inhibit P-gp phosphorylation.

The PKC family consists of several isoforms comprising three groups: classical, novel and atypical. PKC isoforms are widely distributed in mammalian tissues and have many important physiological functions[43-46]. cPKC subfamily shows significant specificity in tissue distribution. The isoenzymes possess distinct differences in localization in different cells. Within a single cell, PKC isoforms also exhibit differences in their distribution before and after their translocation following activation. For example, thymus cells express PKC-α and PKC-β I but not PKC-β II and PKCγ; Cortical and medullary cells of suprarenal gland express PKC-α, while the cortical cells also express PKC-β I and PKCγ.

To date in recent years, the MDR phenotype is also associated with variation in content of PKC isoenzymes. Different isoforms possess distinct differences in expression and function in different MDR cells. It has been confirmed that sensitive cells show the phenotype of MDR when transfected with cDNA encoding PKC-α, which indicats the effect of PKC on MDR. Resistance to ADR of mouse leukemia MDR cell-line could be reversed by anti-PKC-β mAb when it was incubated with anti-PKC-α or anti-PKC-β mAb[47-59].