AIM: The objective of this study is to elucidate the potential role of poly-morphonuclear neutrophils (PMN) in the development of such a sinusoidal endothelial cell (SEC) injury during early acute obstructive cholangitis (AOC) in rats.

METHODS: Twenty one Wistar rats were divided into three groups: the AOC group, the bile duct ligated group (BDL group), and the sham operation group (SO group). The common bile duct (CBD) of rats in AOC group was dually ligated and 0.2 mL of the E. coli O111 B4 (5 × 109 cfu/mL) suspension was injected into the upper segment, in BDL group, only the CBD was ligated and in SO group, neither injection of E. coli suspension nor CBD ligation was done, but the same operative procedure. Such group consisted of seven rats, all animals were killed 6 h after the operation. Morphological changes of the liver were observed under light and electron microscope. Expression of intercellular adhesion molecule-1 (ICAM-1) mRNA in hepatic tissue was determined with reverse transcription polymerase chain reaction (RT-PCR). The serum levels of alanine aminotransferase (ALT) were determined with anutoanalyger and cytokine-induced neutrophil chemoattractant (CINC) was determined by enzyme-linked immunosorbent assay (ELISA).

CONCLUSION: Hepatic SEC injury occurs earlier than hepatic parenchymal cells during AOC. Recruitments of circulating neutrophils in the hepatic sinusoidal space might mediate the SEC injury, and ICAM-1 in the liver may modulate the PMN of accumulation.

Biliary tract infection, especially acute obstructive cholangitis (AOC) is common[1,2]. Despite a multitude of advances in treatment of surgical infection, this remains a significant cause of morbidity and mortality[3,4], where sepsis and endotoxemia from AOC are important causes of multiple organ failure (MOF) and deaths[5-9]. Ohtsuka et al[10] reported that polymorphonuclear neutrophils (PMN) accumulated in the hepatic sinusoidal space increased obviously in rats with obstructive jaundice and there were interaction between PMN and sinusoidal endothelial cells (SEC) causing injury during AOC. This study was study the potential role of PMN in the development of SEC injury and the mechanism of accumulation of PMN during early period of AOC.

Male Wistar rats weighing 200-230 g were purchased from Laboratory Animal Center of Chongqing University of Medical Science. These animals were divided into three groups: the AOC group, bile duct ligated group of (BDL group), and sham operation group (SO group). All the animals were killed 6 h after operation, the surgical procedures were carried out under light diethyl ether anesthesia. The animal models were performed as follows. In AOC group, a 1.5 cm medium incision was made over the upper abdomen, the common bile duct (CBD) was mobilized and dually ligated, and 0.2 mL of the E. coli O111 B4 (5 × 1012 cfu•L⁻¹) (Sigma, USA) suspension was injected into the upper segment. In BDL group, the CBD was doubly ligated but without injection of E. coli O111 B4 suspension. In SO group, neither E. coli injection of suspention nor CBD ligation was done, but only routine operative procedure was performed. Seven rats constituted each group.

Hepatic injury was assessed by measuring the serum alanine aminotransferase (ALT) which was performed with autoanalyger. The serum cytokine-induced neutrophil chemoattractant (CINC) concentration was measured by enzyme-linked immunosorbent assay (ELISA) according to the manufacturer's direction with a lower limit of 10 ng•L⁻¹. For CINC, microtitre plates were coated with anti CINC mAb overnight at room temperature on a plate shaker, after the blockage, samples were then added. The detected antibody was biotinylated anti-CINC. Standard curves were made with a natural CINC calibrated against the WHO interim International Standard.

Total RNA was isolated from rat liver tissue by using the Trizol Reagent (Life Technologies, USA). The quality of RNA was controlled by the intactness of ribosomal RNA bands. A total of 0.5 mg of each intact total RNA sample was reverse-transcribed to complementary DNA (cDNA) by using reverse transcription polymerase chain reaction (RT-PCR) kit (Roche, USA). cDNA was stored at -70 °C until PCR analysis. The PCR primers used were ICAM-1: sense (5'-CTTCTCCTGCTCTGCAACCC-3'), antisense (5'-GGGAGAGCACATTCAGGTC-3'); β-actin: sense (5'-ACCACAGCTGAGAGGGAAATCG-3'), antisense (5'-AGAGGTCTTTACGGATGTCAACG-3'). The sizes of the amplified PCR products were 326 bp for ICAM-1 and 281 bp for β-actin. The procedure was as follows: denaturation at 95 °C for 30 s, annealing at 55 °C for 1 min, and extension at 71 °C for 1 min for 28 cycles. The PCR products were electrophoresed in 20 g•L⁻¹ agarose gels, and the gels were ethidium bromide stained and video photographed on an ultraviolet transilluminator. The bands representing reactive product were scanned by densitometer of a Bio-Image Analysis System (Doc Gel 2000). The relative optical density (ROD) values were expressed as the level of ICAM-1 mRNA in hepatic tissue.

Liver samples from different liver lobes were fixed with 100 mL•L⁻¹ buffered formalin or 25 g•L⁻¹ glutaraldehyde immediately. For light microscopy, the tissue blocks were embedded in paraffin, and the sections were stained with hematoxylin and eosin (H&E). For transmission electron microscopy (TEM), the tissue blocks were embedded in Epon 618 resin and ultrathin sections were stained with uranyl acetate and lead citrate. A H-2000 transmission electron microscope was used.

Results were presented as ¯x ± s. Statistical difference was analysed by means of the analysis of Variance (ANOVA). P < 0.05 is considered significant. 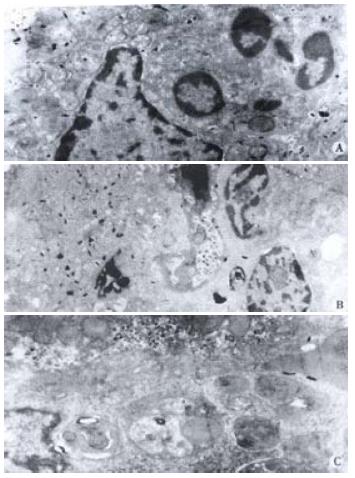 Under light microscopy, no distinct change in SEC could be shown in any of the above groups. Electron microscopically, however, focal detachment, decreased electron density of cytoplasm, and swollen or even vacuolated mitochondria in SEC could often be observed in the AOC group (Figure 1B). In this group, the Kupffer cells were enlarged, but normal surface structures were retained and no degenerative changes of the nucleus or cytoplasm were shown (Figure 1C). In contrast such changes could be occasionally seen in the SEC of BDL group. No evident morphological changes of SEC could be observed in SO group. 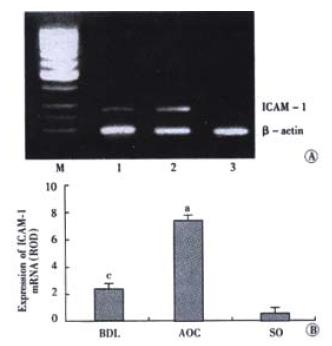 Neutrophils and macrophages play a central role in the host defence against microbial infections. However, they also produce damage to normal tissue by releasing oxygen free radicals, elastase, and various cytokines[11,12]. The hepatic sinusoidal endothelia are fenestrated allowing exchange of substance between the circulating blood and hepatocytes[13]. The Kupffer cells are located at the luminal side of the SEC and is able to phagocytize pathogens and release cytokines, such as tumor necrosis factor-α (TNF-α), interleukin (IL)-1, IL-6, IL-8, and adhesion molecules ICAM-1 (CD54), etc.[14-16], these inflammatory cytokines and chemokines can be upregulated in inflammatory processes within the liver[17-20]. Recent reports have revealed the interaction between neutrophils and SEC in sepsis, and neutrophils have the potential to cause endothelial cell injury by producting protease and superoxides[13,16,21]. Overreaction of neutrophils may be responsible for organ failure in cholestatic rats[10,12,22]. We found that accumulation of PMNs in the hepatic sinusoidal space was accompanied by SEC injury with decreased electron density of cytoplasm, and swollen or even vacuolated mitochondria in the early period of AOC. Our results indicated that damage of SEC ocurred earlier than that of hepatic parenchymal cells and the vascular endothelium which was a critical and initial event in AOC and organ failure processes. SEC injury might develop microcirculatory disturbance in the liver, resulted in hepatocytic damage and hepatic dysfunction.

Although obvious parenchymal cell necrosis was not observed in our study, it is likely that the microcirculatory disturbance could provoke liver dysfunction during AOC. CINC, a member of IL-8 family and a major neutrophil chemotactic factor in rats, increased in the liver during sepsis[23]. Substantial neutrophil accumulation in the liver and the role of these cells in the pathophysiology of liver injury was found in models of endotoxin shock and hepatic ischemia-reperfusion injury[24-32]. But, the relationship between PMN accumulation, ICAM-1 expression and SEC injury during AOC is unclear. The injury to SECs was induced by the interaction of the activated PMNs and SECs via ICAM-1 and CD18[33-37]. Ohtsuka et al[38-52] reported ICAM-1 expression on SEC started to rise 6-12 h after partial hepatectomy, reaching a peak after 24-48 h. ICAM-1 is particularly expressed on Kupffer cells, endothelial cells, and leukocytes and it promotes accumulation of PMN in the hepatic sinusoids and is linked to endothelial cell injury. The mechanisms of upregulated ICAM-1 gene expression during AOC may included (1) inflammatory cytokines upregulate ICAM-1 expression in endotoxemia[28]; (2)synthesis of ICAM-1 is increased and/or its elimination is decreased through the bile in bile duct ligated animals.

In conclusion, hepatic SEC injury occurs earlier than hepatic parenchymal cells damage during AOC. Recruitment of circulating neutrophils in the hepatic sinusoidal space enhance the SEC injury, and ICAM-1 in the liver can modulate the accumulation of PMN.