CONCLUSION: CCK-8 reverses the decrease of MAP in ES rats and has inhibitory effect on the gene and protein expression of TNF-α in spleen, and p38 MAPK may be involved in its signal transduction mechanisms.

Lipopolysaccharide (LPS), main component of Gram-negative bacterial endotoxin[1], is the leading cause of sepsis or endotoxic shock (ES), and when administered experimentally to animals, mimics the same inflammatory response. LPS exerts its effects through cytokines[2]. The pathophysiological changes seen in sepsis are often not due to the infectious organism itself but instead to the uncontrolled production of pro-inflammatory cytokines, including tumor necrosis factor (TNF)-α [3]. TNF-α , which is produced by LPS-activated target cells, is thought to be LPS’s primary mediator[4]. TNF is known to have cytotoxic and cytostatic effects on certain tumor cells, and with a pivotal role in inflammatory reactions and regulation of immunological response[5,6]. TNF-α was mainly produced in the early stage of endotoxemia, and decreased obviously from 6 h to 9 h after challenge[7]. Specific intracellular signaling pathways that modulate cytokine gene expression probably exist in target cells and may represent novel targets for tomorrow’s antisepsis therapies[8]. Mitogen-activated protein kinases (MAPKs) are members of discrete signaling cascades that form focal points for diverse extracellular stimuli and function to regulate fundamental cellular processes[9]. The p38 MAPK, one class of MAPK family, is involved in intracellular signals that regulate a variety of cellular responses during inflammation[10].

CCK-8 possessed both excitatory and inhibitory action on contractile activity of different regions of stomach in guinea pigs[11]. In the spleen, CCK-8 is formed in high abundance in the white pulp where it appears to surround cell clusters. CCK-8 is a chemoattractant for human monocytes and rat macrophages, enhances human eosinophil chemotaxis induced by PAF and LTB4 in allergic patients. Our previous study demonstrated that CCK-8 could protect animals from LPS-induced ES and the protective effect of CCK-8 may be related to its modulation of cytokines [12-14]. Spleen, one of the targets stimulated by LPS, is an important immunological organ. In this study, we examined the expression of TNF-α with reverse transcribed polymerase chain reaction (RT-PCR) and enzyme linked immunoabsorbant assay (ELISA) in spleen and further investigated the mechanism involving p38 MAPK.

CCK-8 (sulfated), LPS (E.coli LPS, serotype 0111: B4), leupeptin, pepstatin A and Triton X-100 were all purchased from Sigma, and aprotinin from Boehringer. The ELISA kit was purchased from Medsystem (Austria) for assay of TNF-α. Total RNA isolation system and access RT-PCR system were purchased from Promega (USA). Monoclonal anti-p38 MAPK (diphosphorytlated p38) was purchased from Sigma (USA). All other reagents used were of analytic grade. Healthy male Sprague-Dawley rats (n = 52, weighing 150 g-200 g BW) were obtained from Experimental Animal Center of Hebei Province.

The rats were randomly assigned to four groups and injected different agents via caudal vein. A bolus dose (8 mg·kg-1, 5 g·L-1) of LPS was injected to group receiving LPS and a bolus dose (40 μg·kg-1, 0.05 g·L-1) of CCK-8 was given to the group of CCK-8 + LPS 10 min before injection of LPS. Saline or CCK-8 (40 μg·kg-1) was administered separately to the control or CCK-8 group. Catheter was inserted into femoral artery and Mean arterial pressure (MAP) was detected using physiological record instrument (RM-6000, Japan). The agents were injected through caudal vein after the MAP became steady.Animals were sacrificed at 30 min, 2 h or 6 h after treatment, spleen was rapidly excised, rinsed of blood. The samples were stored at -80 °C. The samples collected at different time points were for the assay of TNF-α mRNA using RT-PCR, samples collected at 2 h were for the assay of TNF-α protein by ELISA and at 30 min for the expression of p38 MAPK by Western blot.

Analysis of TNF-α mRNA by RT-PCR

Spleen was rapidly excised 30 min after agents administration. Tissues were homogenized with PBS (pH 7.2) and centrifuged at 4 °C, 18000 r·min-1 for 10min.Protein contents were detected in supernatants by coomassie brilliant blue (CBB). Sample loading buffer was added, and each sample was boiled for 8 min prior to loading equal content of protein onto a 12 g·L-1 SDS-polyacrylamide gels, transferred to polyvinylidene fluoride (PVDF) membranes, and incubated with phospho-specific anti-p38 MAPK. Being washed three times in T-PBS, membranes were incubated in horseradish peroxidase-linked secondary antibody for 1 h at room temperature. Membranes were again washed three times with T-PBS and stained with diaminobenzidine (DAB).

Data were reported as -x±s. Statistical differences between values from different groups were determined by one way ANOVA and Newman-Keuls q test. Significance was set at P < 0.05. Gel-Pro Analyzer was used to analyze the PCR and Western results. 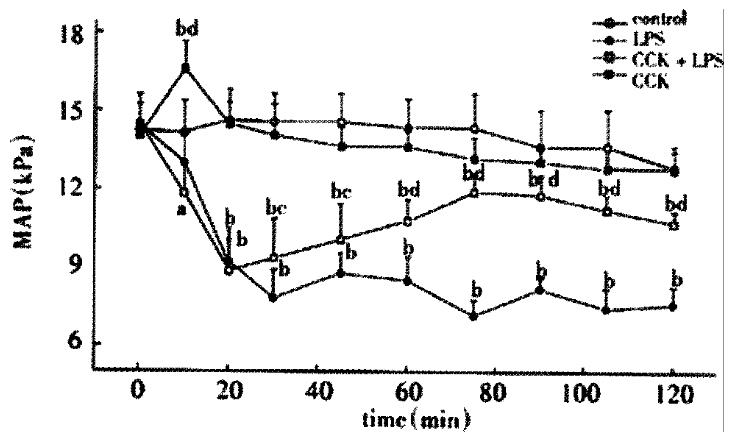 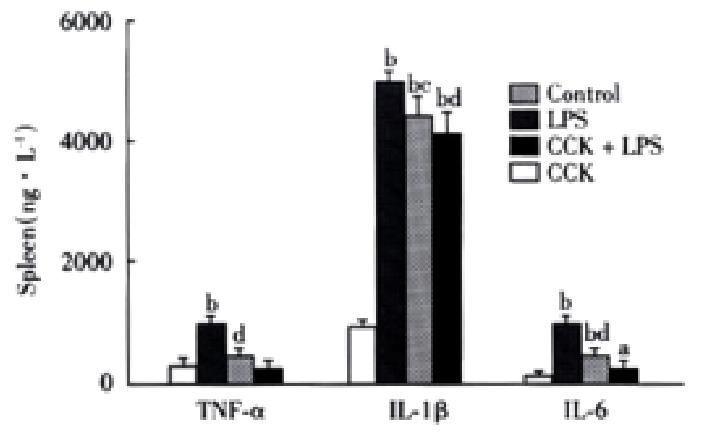 TNF-α mRNA in spleen was detected by RT-PCR analysis. The results showed that the spleen of rats 30 min and 2 h after LPS administration expressed the gene coding for TNF-α because RT-PCR generated a DNA fragment corresponding to the predicted length, 468 bp, of the TNF-α amplification product. The expression of TNF-α decreased in CCK-8 + LPS group compared with LPS group. The ratios of β-actin at 30 min and 2 h were (85% ± 8%) and (57% ± 7%) in LPS group, while it decreased to (30% ± 6%) and (16% ± 2%) respectively in CCK-8 + LPS group. The TNF-α amplification product was not detected 6 h after agents administration. In each tissue sample, all β-actin amplification products were of 420 bp length (Figure 3). 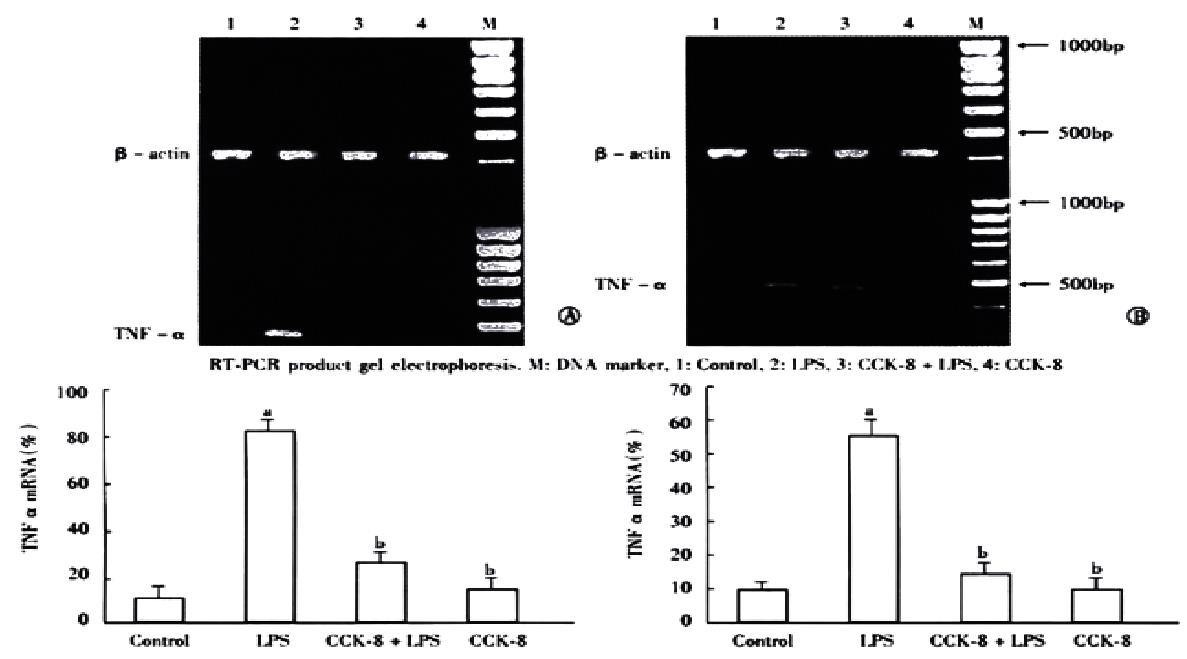 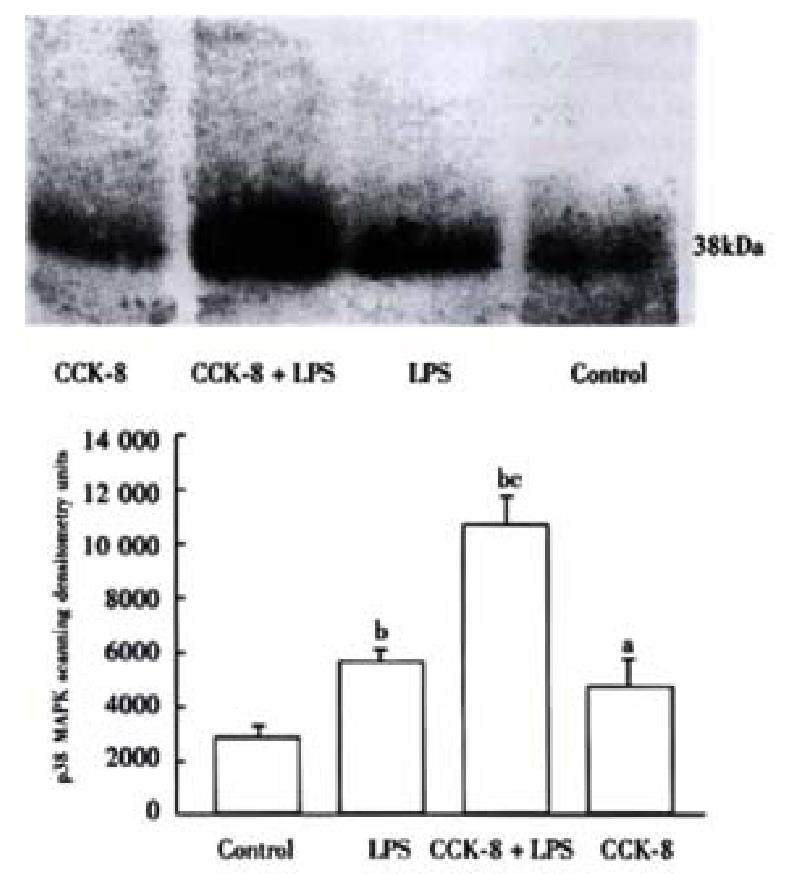 Although macrophages are the main secretors of TNF-α, other spleen cells, such as lymphocytes, may secret low amounts of TNF-α and may influence macrophage ability to generate and secrete the cytokine[15]. This has led to the suggestion that spleen is an important organ in the production of TNF-α following LPS administration, releasing the cytokines into the circulation, thereby contributing to the elevated serum level of the cytokine. Numerous TNF-α and IL-1β mRNA positive cells were observed using in situ hybridization in the marginal zone and in the red pulp of the spleen in rats after LPS injections, whereas sections from saline-treated animals showed minimal cytokine mRNA expression[16]. LPS resulted in a greater increase in circulating levels of TNF-α which peaked at 90 min and decreased at 150 min after LPS administration[17]. We found that CCK-8 significantly inhibits LPS-induced increase of TNF-α in spleen, which agreed with the results we obtained before[14]. While Cunningham et al[18] reported that CCK-8 stimulated production of TNF-α, IL-1β and IL-6 by monocytes, but was considerably less than LPS response. Later studies[19] suggest that the increase of cytokines induced by CCK-8 may be due to the detection of endotoxin/LPS in medium.

Despite convincing data indicating the protective function of CCK-8 to organism in ES, the precise mechanism remains elusive. Our previous studies showed that CCK can protect pulmonary arterial endothelium against detrimental effects by LPS or TNF-α [20,21] The anti-inflammatory effect of CCK-8 shown in this study may mediate the cell protective function of CCK-8 in ES. The p38 MAPK pathway may be involved. Members of the MAPK cascade are considered to play key roles in signal transduction pathways activated by a wide range of stimuli[22]. CCK is known to activate MAPK signaling pathways[23]. Activated MAPK then tranduces into the nucleus and phosphorylates the ternary complex factor TCF which activates the expression of immediate-early genes, such as c-fos and egr-1[24]. The three best characterized members of this growing family of serine/threonine kinases are extracellular signal regulated kinase (ERK), c-jun N-terminal kinase (JNK) and p38. While ERK responds vigorously to growth factors and certain hormones, JNK and p38 are rather activated by stress stimuli and are widely believed to be part of the cellular stress response machinery[22,25]. The p38 MAPK is associated with immune cell activation, because this kinase is activated by a variety of inflammatory mediators. Challenge of neutrophils with LPS leads to activation of p38 but with slower kinetics than G-protein-coupled chemoattractant receptors[26]. CCK-A and CCK-B receptors are G-protein-coupled[27]. p38 is expressed in the pancreas and rapidly activated by CCK receptor agonist, cerulein[28,29]. p38 inhibition aggravated cerulein pancreatitis, indicating that p38 activation may support protection of the pancreas against damage through hyperstimulation stress. CCK activated p38 MAPK and increased the phosphorylation of HSP27[30]. The p38-MAPKAPK2-HSP27 pathway may be important for organ protection in the pancreas. Other studies indicate that p38 activation can indeed be protective[14]. Sodium salicylate (NaSal) significantly reduced TNF-alpha production in LPS-stimulated macrophages. LPS-stimulated activation of ERK and SAPK/JNK was inhibited by NaSal pretreatment. NaSal treatment of macrophages activated p38 MAPK independent of LPS stimulation[8]. Our data have raised the question of how the increase in p38 MAPK activity, a potent intermediate signal transducer involved in the production of TNF-α after LPS administration, could be associated with decreased production of TNF-α , detected by ELISA and RT-PCR analysis in the presence of CCK-8. LPS-induced production of TNF-α is regulated mainly, but not exclusively, through the p38 MAPK pathway[31]. TNF-α expression in T cells is regulated by several distinct MAPK pathways that functionally cooperate and are critical for transcriptional as well as for posttranscriptional processes[32]. Carbon oxide inhibited the LPS-induced production of TNF-α in mice, which was mediated by p38 MAPK activation[3]. Perhaps a delicate balance exists in the actions of p38, in that subtle cellular activation, as with LPS alone, is stimulatory for TNF-α synthesis, whereas hyperstimulation, as seen in spleen treated with CCK-8 and LPS, becomes inhibitory and thus results in downregulation of TNF-α .This modulation by CCK-8 of LPS-induced production of TNF-α exemplifies accumulating evidence emphasizing the complexity of the molecular regulation of TNF-α expression.

The results of the present study show that administration of CCK-8 prevents LPS-induced decrease of MAP and attenuates LPS-induced increase of TNF-α gene and protein expression in spleen. The different activation of p38 MAPK by LPS or CCK-8 may be involved in their effect on TNF-α production. CCK-8, therefore, might be used therapeutically to treat septic shock syndrome and other inflammatory disease states.