METHODS: Growth curves of HIEC were drawn by MTT colorimetry. The dynamics of cell proliferation was analyzed with flow cytometry, and morphological changes were observed under light and electron microscopy after long-term (6 weeks) treatment with CO.Expression of cyclooxygenase-2 (COX-2) mRNA was detected by dot blot in HIEC treated with CO. Genes related to CO were screened by DD-PCR, and the direct effect of CO on the contractility of isolated guinea pig colonic smooth muscle cells was observed.

Croton is the fruit of Croton tiglium L, which consists of 34%-57% croton oil and 18% proteins. Croton oil (CO) contains crotonoleic acid, crotonic acid, crotonyl alcohol, 16 kinds of crotonyl alcohol bisester and many kinds of crotonyl alcohol trisester. Also contained in the seed of croton are crotin, cocarcinogen C-3, crotonoside, isoguanine, β-sitosterol, amino acids and many kinds of enzymes. However, the principal component of croton extract is CO, which possesses multiple drug effects. CO is a stimulant in making inflammatory models, especially in models of skin and mucosal inflammation[1], such as animal models of hemorrhoids, pleuritis, ear edema and uveitis[2]. Investigations have shown that allergic contact dermatitis (ACD) induced by CO is not a kind of late pleoergy response, but is mediated by the immune system in skin[3,4]. Metalloprotease neutral endopeptidase (NEP) and neuropeptide play an important role in ACD[5]. After CO administration to mice for 3 h[6,7],there was no change in the mucosa of stomach and intestine under light microscope, but mucosal epithelial cell inflammation was observed under electron microscopy.

According to the recent, that dehydrocrotonin (DCTN), an extract of CO, had anti-ulcer effect[8], especially in ulcers induced by hypothermia, alcohol and pyloric ligation. This effect was supposed to the related to the increase in the release of prostaglandin E2, the non-specific competitive binding of H2 and M receptors of stomach, the reinforcement of mucosal protective action and the weakening of mucosa-impairing factors. So DCTN has the potential to be a new anti-ulcer drug[9,10].

It was reported that croton extract could not only suppress tumor growth but also promote tumor development. It has been confirmed that t-DCTN, which possesses neither genetic toxicity nor cytotoxicity, has anti-tumor activity and can significantly elongate the survival period of mice with S180 sarcoma and ascites neoplasia[11,12]. Recent research showed that 2,3-dihydroxy-labda-8 (17), 12(E), 14-triene, one of the croton extracts, had non-specific cytotoxicity for various tumor cells[13]. However, some investigations found that CO could cause skin carcinoma by lipid peroxidation and hydroperoxide production; it could directly bind protein kinase C, stimulating over-proliferation of epidermis, and repeatedly impair skin, which induces skin hyperplasia.

Human intestinal epithelial cell line (HIEC), presented as a gift by Dr. Ren DQ from Department of Radiation Medicine, Fourth Military Medical University, was grown in RPMI 1640 medium with 100 mL·L-1 fetal bovine serum. CO dissolved in dimethyl sulfoxide (DMSO) was added into the culture medium when the medium was exchanged[32]. The end-concentration of CO was 4 mg·L-1; then the concentration increased progressively to 40 mg·L-1 in 6 weeks.

Harvest HIEC in log phase growth that was treated with CO for 6 weeks. Cell proliferation cycle of HIEC was analyzed with flow cytometry after HIEC was routinely digested, washed twice with PBS and fixed with 700 mL·L-1 ethanol. DNA index (DI) was calculated with the formula: DI = experimental group cells G0/1/ control cells G0/1.DNA.

Changes in cell morphology were observed dynamically under inverted microscope. HIEC in log phase growth that was treated with CO for 6 weeks was harvested, and its proliferation cycle was analyzed with flow cytometry after routinely digested, washed twice with PBS, centrifuged for 5 min at 1200-1400 r·min-1, fixed with glutaraldehyde for 30 min at 4 °C, and prepared into ultrathin section for transmission electron microscopic observation.

Total RNA was extracted from control and experimental cells treated with CO for 6 wk. RNA samples were pointed onto the nitric cellulose membrane, and specific COX-2 oligonucleotide probes were end-labeled. Expression of COX-2 mRNA was detected with dot blot.

Gene expressions of HIEC treated with CO for 6 weeks and of control were compared through DD-PCR. Primers were designed according to the literature: 3’end anchor primer H-T11C: 5’-AAGCTTTTTTTTTTTC-3’, 8 strips of 5’end random primers: H-AP1-H-AP8. The first chain of cDNA was synthesized by reverse transcription; then with RT products as templates, and PCR was performed with 8 strips of 5’-end random primers individually. Products of RT-PCR were run on 60 g·L-1 urea degeneration polyacrylamide gels until the indicator arrived at the basal part of the gel at 200-300 V for 6-8 h. The gels were stained with modified silver-stain. Differential cDNA fragments were cut, recovered and purified for secondary amplification with PCR, and amplification products were isolated by agarose gel electrophoresis and ligated with pUC-Tm vector after recovery and purification. Recombinant plasmids were transfected into DH5α Escherichia coli and the bacteria were plated and incubated at 37 °C overnight. Positive clones were picked out and the plasmids were extracted, followed by restriction enzyme cleavage identification. Further identification of the positive clones included reverse Northern blot and sequencing by automatic sequencer. Homology of the sequences of the differential expression cDNA fragments was searched in Gene Bank Database.

Morphologic changes of HIEC were dynamically observed under invert microscope in cells incubated with CO. Initially many cells exhibited sheet shedding, intercellular space increased, toxic granules accumulated in the cytoplasm, and cell growth was significantly delayed. The growth behavior of the cells improved after treatment with CO for 11 d. After the dosage of CO was progressively increased to 40 mg·L-1 at the 6th week, the following phenomena occurred: fusiform cells significantly increased, cell bodies shrank, the nuclei were enlarged, the cytoplasm was reduced, karyoplasm lopsidedness was developed, and cell growth was accelerated. Under transmission electron microscope, we observed many wide apophyses in cell membrane, abundant microvilli, enlarged nuclei, multiplied nucleoli, and abnormal nuclei with pathologic mitosis (Figure 1). 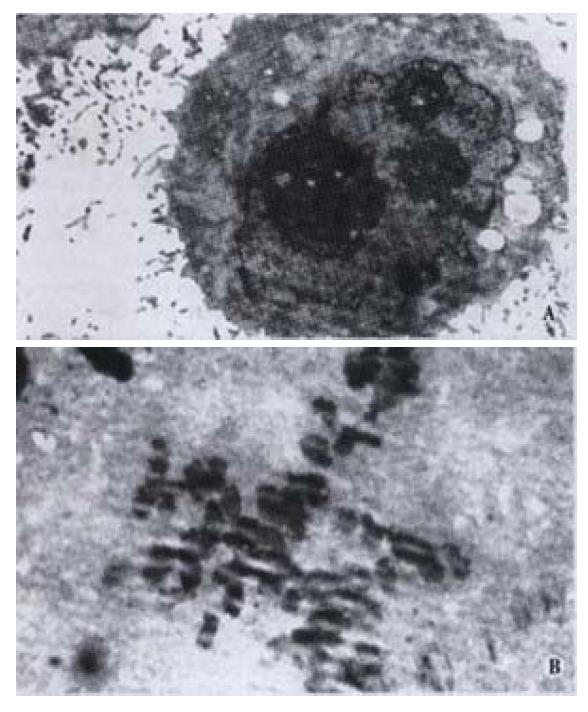 Expression of COX-2 mRNA was significantly down regulated in HIEC after treated with CO for 6 week(Figure 2). 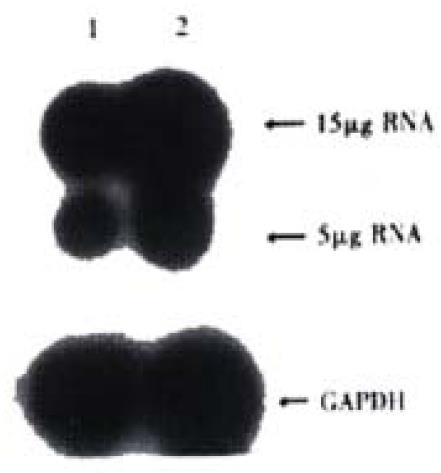 Some cDNA fragments found in HIEC treated with CO were up-regulated, down-regulated, newly born or deleted in comparison of experimental cells with controls (Figure 3). Thirteen different cDNA fragments were successfully cloned; among the 13 positive clones, 2 fragments were significantly up-regulated and 11 down-regulated in HIEC treated with CO, which was confirmed through reverse Northern blot analysis. Sequencing and homology demonstrated that one over-expressed cDNA fragment is 100% homologous with the homeobox gene of mitochondrial cytochrome C oxidase subunit-2 gene. 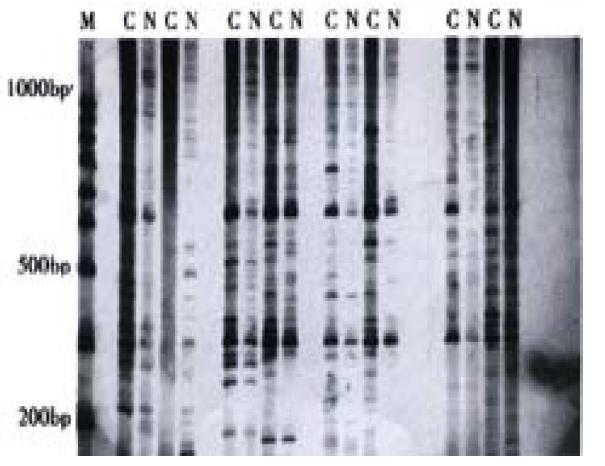 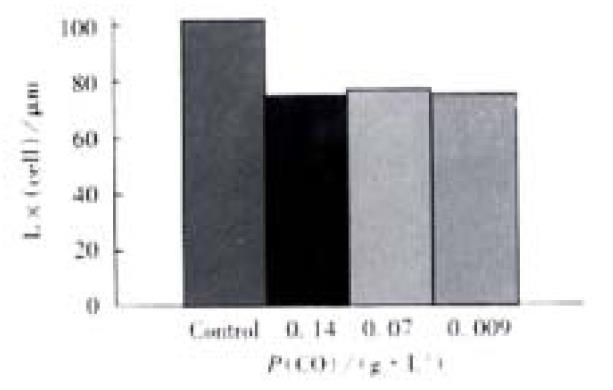 Our study showed that[36] high dosage of CO could result in the death of HIEC; middle dosage could inhibit cell growth in a dose-dependent manner; low dosage had no effecton cell growth. Meanwhile, after long-term continuous incubation with CO, the cycle from G1 to S of HIEC was shortened, the quantity of G1 phase cells was reduced, the quantity of S phase cells was increased, and DI was raised. We found that the principal phenomena of HIEC treated with CO included cell degeneration, necrosis, diminished ability of cells adhesion, and delayed cell growth. As the drug action persisted, degenerated cell quantity decreased and cell proliferation was accelerated. We also observed that HIEC treated with CO proliferated faster than control cells, and abnormal nuclei with pathologic mitosis were observed under electron microscope. These phenomena indicated that the cytotoxicity of high concentration CO might be the major cause for cell growth suppression. CO had the potential effect on promoting cell over-proliferation and increasing the content of heteroploid DNA when HIEC was incubated with CO for a long time.

COX-2 is an isoenzyme of cyclooxygenase discovered recently. Under normal conditions,COX-2 expression was low or non-existent in most tissues and cells in human body, but its expression could be promptly enhanced when cells were stimulated by a variety of factors. Recent studies showed that COX-2 is closely related to the development and progression of many kinds of human tumors, especially gastrointestinal tumors, such as colon cancer and gastric cancer. It has been confirmed that the expression of COX-2 increases more significantly in colon cancer tissues than in normal colonic tissues[37], and its expression is higher in many kinds of gastric cancer cell lines and tissues than in their normal counterparts[38,39]. The incidence and mortality of colon cancer were decreased with the long-term intake of non-steroidal anti-inflammatory drugs(NSAIDS), a COX-2 inhibitor, which is effective on familial adenomatous polyposis. These data indicated that COX-2 might play an important role in the pathology of these tumors. The specific mechanism of COX-2 induced tumorigenesis is yet unclear, but it is suspected to be related to the following factors: catalysis of carcinogen synthesis; catalysis of prostaglandin(PGs) synthesis,which can regulate the expression of genes and accelerate DNA synthesis and cell proliferation;inhibition of cell apoptosis; enhancement of adhesion between cells and extracellular matrix;promotion of tumor angiogenesis[40,41]; inhibition of immunological response[42]. The expression of COX-2 mRNA was detected in HIEC treated with CO for 6 weeks, and the results revealed its significant down-regulation. The relationship between CO-induced tumorigenesis and down-regulation of COX-2 in HIEC remains to be elucidated.

Croton possesses many kinds of drug actions; however, its clinical application is largely limited to treating constipation, while its effect in promoting gastrointestinal motility is neglected. The neglect is not only due to its complexity in components and severe side effects, but also to the ignorance of its molecular mechanism in promoting gastrointestinal motility. Pol[46] found that CO could accelerate gastrointestinal movement of mice at 3 h after gastric administration. When CO was administrated to dogs[47],it could quickly evoke a rapid complex wave similar to the interdigestive myoelectric complex(IMC) III phase, although its contractile time was shorter its velocity of conduction faster than normal IMC. However, it was not affected by vague nerve ,which showed no relationship with α and ( receptors. IMC cycle shortening induced by CO was the principal cause of diarrhea. Albuquerque made a series of gastrointestinal movement experiments on animals with CO[48]. The results showed that CO and its preparations could directly affect intestinal smooth muscles and rat diaphragm muscles and cause them to contract. Other researchers reported[49,50,51] that senna could induce diarrhea and accelerate gastrointestinal movement by enhancing the synthesis and release of endogenous prostaglandin E2(PGE2). Although we do not know whether the gastrointestinal motility enhancement of CO is related to PGE2, the significant down-regulation of COX-2 expression in HIEC with long-term treatment of CO indicated that the mechanism of CO promoted motility is different from that induced by senna. Furthermore, our experiment confirmed that the average length of colonic smooth muscle cells was significantly shortened when they were incubated with CO of different concentrations, which showed that CO had a direct contractile effect on colonic smooth muscle cells.

To sum up, the effect of CO on the HIEC growth was in a dose-dependent manner. High dosage of CO could delay cell growth or cause cell death; and low dosage had no effect. A long-term administration with progressively increased CO dosage could promote cell proliferation,increase heteroploid DNA content, and induce malignant conversion of cells. COX-2 expression was significantlydown-regulated and mitochondria cytochrome C oxidase subunit-2 gene was significantly up-regulated in HIEC after induced by CO for a long time. At the same time, the expression of many genes was changed. CO has a direct contractile effect on the colonic smooth muscle cells of guinea pig.