METHODS: The model was induced by subcutaneous injection of CCl4. BOL was administered and the change of serum hyaluronic acid (HA) and laminin (LN) was observed and the degeneration of liver cells and the degree of fibre hyperplasia analyzed. Changes of ultra micro-structure in liver cells were observed in some samples.

CONCLUSION: The BOL has certain therapeutic effect on the experiment hepatofibrosis. Its mechanisms might include: protecting the function of liver cells, inhibiting excessive synthesis and secretion of extracelluar matrix from hepatic stellate cells, relieving the capillarization of hepatic sinusoid, improving liver micro-circulation, and regulating immune function.

The BOL afforded by Zhejiang College of TCM, according to the ingredient of Jingui Biejiajian pill, which is recorded in an ancient medical book of TCM (Jinkui Yaolue). It contains crude Chinese medicine 0.92 g per millilitre (that is 20 times the dosage used in adults). I, II group ig NS 10 mL/kg, III group ig 0.001% colchicine in distilled water of the dosage of 0.1 mg•kg¯¹, IV group ig BOL 4.6 g•kg¯¹ and V group ig BOL 9.2 g•kg¯¹. All groups had been treated once a day for 5 wk and took water and fodder ad lib. For maintaining pathological attack, 400 mL•L¯¹ CCl4-liquid paraffin mixture 3 mL•kg¯¹ once a week until the end of treatment was injected subcutaneously to the models of II-V groups. After the treatment, venous blood was collected from retrobulbar vein, serum was separated and preserved under -70 °C for test. HA and LN were examined by radioimmunoassay. The left liver lobe was dessected and fixated by 100 mL•L¯¹ formalin and embedded in paraffin, serially sectionalized and then stained with HE observed under optical microscope. In case of observing the collagenous fiber hyperplasia Masson staining was employed. The standards for interpreting the degree of hyperplasia under microscope are in accordance to the criteria of the 5th National Academic Conference of Infection and parasitosis[4], and the degree of degeneration refers to the standard of reference [5].

Data described as mean ± SD and analysed by F test, and q test was used to compare the data between 2 groups of multiple groups. The semiquantitative data was analysed by Ridit test. P < 0.05 regarded as significant.

During the period of treatment, in gruop II 2 rats died, 1 rat each died in group I, IV and V, and in group III no rat died.

Influence of BOL on serum HA and LN

Influence of BOL on liver hyperplasia and degeneration

Being analysed by Ridit (χ² = 13.24, P < 0.05, Table 2), we found that the treatment was relevant with the extent of liver hyperplasia. According to the average Ridit, the high-dose BOL group did the best in improving liver hyperplasia.

According to the results of statistical analysis (χ² = 11.99, P < 0.05, Table 3), we considered that the extent of liver cell degeneration was related to the treatment. Referring to the average Ridit, the effectiveness of improving the degeneration in high dosed BOL group was best, and model group had the worst result.

The nucleuses in liver cell of normal SD rats were circular or elliptic and located in the center of cell, the mitochondria were circular or elliptic, the ridges were clear, the Ito cell could be found in Disse’s spaces, its cytoplasm contained plenty of fat droplets. How eic, the nucleoluses disappeared, rough endoplasmic reticulums expanded obviously, the mitochondria were tumid, the ridges were broken or lacked, there were a gr eat deal of fat droplets in the cytoplasm. Many collagenous fibers accumulated in Disse’s spaces. The number of stellate cells and rough endoplasmic reticulum increased and surrounded by a large number of collagenous fibers. Compared with the model group, the fat droplets in liver cell of the high-dose BOL group decreased, the structure of nucleus was clear and the mitochondria were tumid lightly. Being observed under the electronic microscope the results of low dosed BOL group were similar to those of colchicine group. Their damage as lighter and more serious than that in model group and high-dose BOL group respectively (Figure 1, Figure 2, Figure 3, Figure 4, Figure 5). 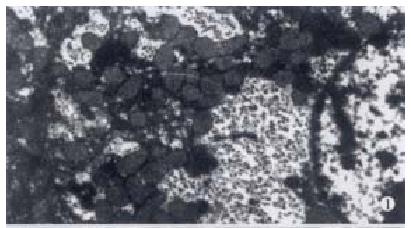 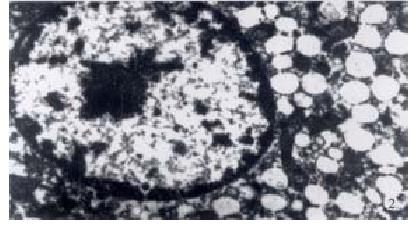 Recently, studies on the prevention and treatment of liver fibrosis are very popular in China. Besides western medicine[7-11], single Chinese drug and its effective ingredients[12-19], anti- hepatofibrotic effect of Chinese complex formula[20-27] are also the main project in researches. These studies illustrate the mechanism and clinical effectiviness[28-32] in anti-hepatofibrosis from different point of view. Now, we will especially discuss the anti-hepatofibrotic mechanism of BOL.

The knowledge of liver fibrosis in TCM

Though the term, liver fibrosis, is not mentioned in the ancient medical documents of TCM, the corresponding clinical symptoms of this disease in TCM terms such as abdominal mass, costal pain, flatulence, jaundice, blood stasis, etc. are commonly noted. The clinical symptom of liver fibrosis is intricate. According to the theory of TCM, its basic pathogenesis is that: the condition is manifested as body resistance weakened while pathogenic factors prevailed, damp-heat and blood stasis coexisted, liver depressed and deficiency of qi and blood in spleen and kidney. Liver depression and qi stagnation can result in blood stasis, blood fails to nourish liver, and the key pathogenetic mechanism is blood stasis[33]. At the beginning, the pathogenetic mechanism is qi stagnation and blood stasis. If being treated unproperly, the disease will evolve into blood stasis mainly, then into a condition which manifests as blood stasis, body resistance weakened and excess in superficiality. The therapy is promoting the circulation and relieving the stasis, s trengthening the body resistance to eliminate pathogenic factors, resolving and softening hard mass.

BOL is an improved preparation from Biejiajian Pill which is recorded in an ancient medical book (Jinkui Yaolue). Its ingredients include twenty-three herbs, such as biejia, taoren, danpi, shaoyao, dahuang, caihu, guizhi, banxia, houpu, renshen, e-jiao, huangqin etc. The combination of ingredients has the effect on promoting circulation and relieving stasis, strengthening body resistance and eliminating pathogenic factors simultaneously, resolving and softening the hard mass, which is conformable with the principle of treating liver fibrosis. The therapy of promoting blood circulation and cleminishing stasis has been adopted in clinic[34].

Inquiring into the anti-hepatofibrotic mechanism of BOL

At present, the mechanism of liver fibrosis is inferred that the pathogenic factors injure the liver cell and activate Kupffer’s cells to secrete certain kinds of cytokines, which act jointly with other cytokines secreted by the platelets, hepatic sinusoid endotheliocytes, hepatocytes and some chemical intermediates to activate stellate cells, converting them into myofibroblasts, secreting a great deal of extracellular matrix (ECM). The increase of secretion and decrease of degradation result in accumulation of ECM in liver, forming liver fibrosis gradually[35-39]. According to this experimental result, we suggest the main effect of BOL on treating liver fibrosis in four aspects as follows. ①Preventing the hepatocyte from degeneration and necrosis. The degeneration and necrosis of liver cell are the factors inducing excessive deposition of ECM, which takes an important role in the progression of liver fibrosis[40,41]. So, preventing the degeneration and necrosis of liver cell after being hurt can eliminate the promoting factor of liver fibrosis, preventing Kupffer’s cells and stellate cells from being activated, inhibiting the progression of liver fibrosis. This experimental result shows that BOL can protect the liver cells from being harmed, reduce their degeneration and necrosis, clean or partly clean the inflammatory reaction (also a promoting factor of liver fibrosis), all these demonstrate the good effect on treating liver fibrosis. ② Inhibiting the liver stellate cells to synthesize and secrete ECM. It is well known that liver stellate cells are the interstitial cells served as the main source of ECM. As the liver cells are injured, they will be activated, and increased, and then convert into the transitive type and myofibroblast which synthesize and secrete the ECM excessivly[40,42-44]. The collagens are the main elements of ECM. They are formed in rough endoplasmic reticulums of fibroblasts and are secreted as collagenous fibrils[45]. Both the number of stellate cells and rough endoplasmic reticulums of high dosed BOL group are less than those of model group, which indicates that inhibiting the activation and hyperplasia of the liver stellate cells maybe one of the effects of BOL to prevent and treat liver fibrosis. ③Relieving the capillarization of hepatic sinusoid, improving the microcirculation of liver. The fenestrate on the hepatic sinusoid endotheliocyte is the site for exchanging materials between the liver cells and plasma. When liver fibrosis developed, ECM synthesized profoundly, deposited in Disse’s spaces, forming the membranous spiral lamina under the hepatic sinusoid endothelium, fenestrate of hepatic sinusoid decreased or vanished and then forming capillarization, resulting in impairment of microcirculation, subsequently, affecting the exchange of the oxygen and substance of the liver cell seriously, thus bringing out or aggravating the damage of liver cell[45-48]. LN is the main glycoprotein of the membranous spiral lamina and distributes together with the IV type collagen in the liver. So its serum content is considered as a renewal index of membranous spiral lamina[49-51]. This experimental result indicated that: BOL can decrease the LN content in liver fibrosis, thus relieving the capillarization of hepatic sinusoid, improve the microcirculation of liver, reducing the damage of liver cell and accelerating the repairment of liver. This may be an important effect of BOL on promo ting the circulation and transforming stasis. ④ Regulating the immune function, reducing the immuno-damage of liver cell. Some researchers[52] complain that the liver cirrhosis is the result of the immune function disturbance. According to our previous report[2], we suggest that BOL can adjust humoral immunity, reduce the immuno-damage of liver cell, improve the substance metabolism and protect the liver tissue from being injured.

Edited by You DY