METHODS: The distribution of NOS in gastric wall was studied in quantity and location by the NADPH-diaphorase (NDP) histochemical staining method and whole mount preparation technique.

RESULTS: NOS was distributed in whole stomach wall, most of them were located in myenteric plexus, and distributed in submucosal plexus. The shape of NOS positive neurons was basically similar, most of them being round and oval in shape. But their density, size and staining intensity varied greatly in the different parts of stomach. The density was 62 ± 38 cells/mm2 (antrum), 43 ± 32 cells/mm2 (body), and 32 ± 28 cells/mm2 (fundus), respectively. The size and staining intensity of NOS positive neurons in the fundus were basically the same, the neurons being large and dark stained, while they were obviously different in antrum. In the body of the stomach, the NOS positive neurons were in an intermediate state from fundus to antrum. There were some beadlike structures which were strung together by NOS positive varicosities in nerve fibers, some were closely adherent to the outer walls of blood vessels.

CONCLUSION: Nitric oxide might be involved in the modulation of motility, secretion and blood circulation of the stomach, and the significant difference of NOS positive neurons in different parts of stomach myenteric plexus may be related to the physiologic function of stomach.

Recent pharmacological and physiological studies indicated that nitric oxide (NO) is a neurotransmitter in the non-adrenergic non-cholinergic (NANC) inhibitory nerves in the mammalian gastrointestinal tract[1-15]. It may play a very important role in the neuronal regulation of gut. Previous studies have revealed the distribution, morphological features and projections of nitric oxide synthase (NOS) activity neurons and fibers in the enteric nervous system in intestine[16-25]. However, there have been much fewer studies of NOS activity in stomach wall since it is very difficult to make whole mount preparations of stomach. If NO is a transmitter of NANC inhibitory nerves, it should be present in neurons innervating the muscularis in stomach. What are the regularity of distribution of NOS in rat gastric wall, and the pat tern of innervation of these neurons To answer these questions, we examined the distribution and morphological feature of NOS positive neurons in the stomach wall using improved whole mount preparation technique.

Adult male or female Wistar strain rats (210 g-250 g in body weight) were provided by the Center of Laboratory Animals of the Third Military Medical University. The rats were fasted overnight prior to the experiment, and anaesthetized with sodium pentobarbitone (50 mg•kg¯¹, ip). Stomach was rinsed with 0.01 mol•L¯¹ phosphate buffered saline (PBS, pH7.4) and poured into gastric cavity with 40 g.L-1 paraformaldehyde (until 3-4 times of normal stomach volume), put in the same fixed liquid for 4 h-6 h (4 °C), and soaked in 300 g•L¯¹ sucrose liquid for 24 h (4 °C). Thereafter, wash away with PBS, wrap stomach up with bandage, rub gently for 2-3 min, stuff tightly with cotton, then demarcate trace along greater curvature of stomach toward lesser curvature with an extremely thin piece of bamboo, and strip slightly. Finally, trim the longitudinal muscular layer and dip in PBS for staining.

All results were expressed as the mean ± SD, data were analyzed by Student t test. P values < 0.05 were considered statistically significant.

Our study showed that NOS was widely distributed in rat stomach wall, most of them being localized in myenteric plexus, and distributed in submucosal plexus, gastric mucosal epithelium and gastric gland as well. In the myenteric plexus, NOS positive neurons were clearly identified by their sharply defined dark blue cytoplasmic stain with almost no background, the nuclei appeared as colorless “Holes” (Figure 1). The shape of neurons was basically similar, most of them varied from round, oval to fusiform, while their density, size and staining intensity varied greatly in the different parts of stomach. The density was 62 ± 38 cells/mm2, 43 ± 32 cells/mm2 and 32 ± 28 cells/mm2, respectively in antrum, body and fundus. Two subtypes of NOS positive neurons could be distinguished on the basis of size, staining intensity and progress in number. In fundus, about 75% neurons were large, dark stained and had some long progresses (Figure 2). Neurons of the second subtype were slightly smaller, with some short processes and mainly located in antrum (approximately 65%) (Figure 3). In the body of stomach, the NOS positive neurons were in an intermediate state from fundus to antrum. Moreover, some beadlike structure was strung together by NOS positive varicosities in nerve fibers, and some were colsely adherent to the outer walls of blood vessels (Figure 4). 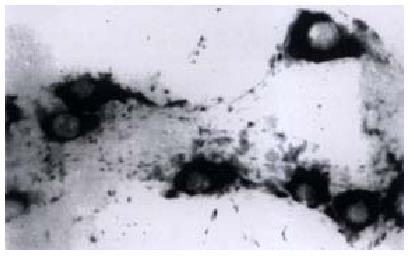 Figure 1 The shape of NOS positive neurons in the myenteric plexus of rats (body). NDP × 400 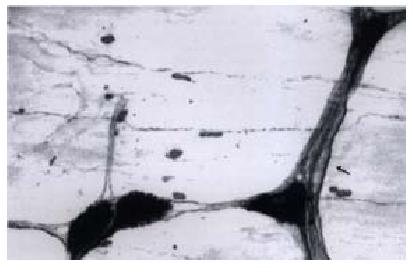 Figure 2 The shape of NOS positive neurons and its long processes (↑) in myenteric plexus of rat fundus. NDP × 400 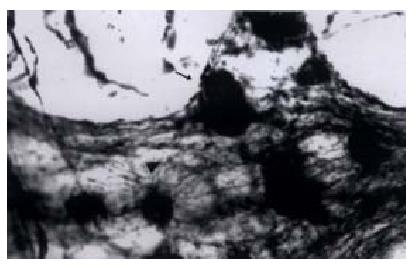 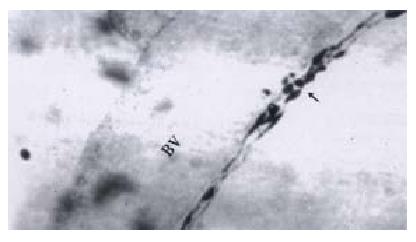 Since the early 1960s, it has been known that discrete populations of nerve cells can be labeled by an obscure, but simple, histochemical reaction involving the reduction of tetrazolium salts to form dark formazan products. This reaction is catalyzed by an unidentified enzyme contained in these cells and requires NADPH. The enzyme, called NADPH diaphorase, has been identified as being identic al to NOS[26-39]. It has been demonstrated that NADPH diaphorase reacticity and NOS immunoreactivity coexist in enteric neurons. The simple histochemical procedure to visualize NADPH diaphorase may be useful to localize NOS in other tissues in view of the currently limited availability of antisera to NOS[40-50]. Therefore, the NADPH-d is now wildly used as a marker for neuronal structures in the CNS and ENS which contain the enzyme NOS.

The result showed that NOS was widely distributed in the gastric wall. Briefly, many NOS positive neurons were present in the myenteric plexus but relatively few in the submucous plexus. The majority of the NOS positive neurons in stomach could be classified as either Dogiel type 1 or type 2 neurons, although they were not as typical as the Dogiel neurons in small intestine, suggesting that NOS is both in the circular muscle motor neurons and in some interneurons. Some NOS positive nerve fibers formed a dense network in the circular muscle and in myenteric ganglia, and few nerve fibers in the mucosa. Based on this evidence, it is clear that the distribution of NOS in the enteric nervous system is compatible with a transmitter role of NO in stomach.

The significant difference of NOS positive neurons in different parts of the stomach myenteric may be related to the physiologic function of stomach. The density of NOS positive neurons was scarce in fundus, it is advantageous to keep tonic contraction at fundus and maintain foundation tension, but the activity of NOS was more powerful than that in antram. It benefits gastric lumen relaxation for food store after diet. Teng et al[6] found that involvement of NO in the reflex relaxation of the stomach to accommodate food or fluid, and the NO released from fundus plays a principal role in adjusting, gastric lumen volume and press. We also found that the density of NOS in pyloric part was intensive, it is possibly related to stomach peristalsis since there were not only NOS neurons, but also other types, especially cholinergic neurons[7]. They released transmitters to coordinate each other, adjust stomach smooth muscle to shrink, thus producing peristalsis as a mechanical pump pushing food to duodenum. Meanwhile, the results show that staining intensity of NOS neurons was different in pylorus, hinting that some NOS neurons may be in a reserving condition, once required NOS will be activated and NO sythesized to regulate stomach movement and the tension of pyloric sphincter. But the detailed mechanism is far from clear. We also found that there were many NOS positive varicosities, and bead-like structure strung together in nerve fibers. Some of them were closely adherent to the outer walls of blood vessels and smooth muscle fibers. This finding has provided morphological evidence of NO involved in the modulation of motility and blood circulation of gastrointestinal tract.