AIM: To investigate if sleep deprivation is able to increase the expression of inducible heat shock protein 70 in gastric mucosa and its possible role in mucosal defense.

METHODS: Rats for sleep disruption were placed inside a computerized rotating drum, gastric mucosa was taken from rats with 1, 3 and 7 d sleep deprivation. RT-PCR, immunohistochemistry and Western blotting were used to determine the expression of heat shock protein 70. Ethanol (500 mL·L-1, i.g.) was used to induce gastric mucosa damage.

RESULTS: RT-PCR, Western blotting and immunostaining confirmed that the sleep deprivation as a stress resulted in significantly greater expression of inducible heat shock protein 70 in gastric mucosa of rats. After the 500 mL·L-1 ethanol challenge, the ulcer area found in the rats with 7 d sleep deprivation (19.15 ± 4.2) mm2 was significantly lower (P < 0.01) than the corresponding control (53.7 ± 8.1) mm2.

Stress has been shown to induce gastric mucosal lesions and lower the effectiveness of the mucosa as a barrier[1-6]. In rats, gastric ulcers can be produced by cold-restraint stress[7-9] and it is frequently employed as a model for the study of the mechanisms of stress on ulcer formation. Cold-restraint stress, however, is not normally encountered in human subjects while sleep deprivation is a common experience among city dwellers. swift workers and medical professionals. It imposes stress on the body, and produces a variety of health problems[10-14]. Sleep deprivation is associated with poor congitive ability, and shortening of longevity[15]. Studies have found that the cognitive function of doctors after a night shift was considerably decreased. Sleep deprivation is also a major problem in the intensive care units and it has been suggested to affect the healing process of patients thus contributing to an increase in morbidity and mortality[16]. Sleep deprivation has been shown to induce typical dermatitis in experimental animals. Severe ulcerative and hyperkeratotic skin lesions localized to the paws and tails developed in rats deprived of sleep[17]. This effect of sleep deprivation may affect the epithelial linings of the gastrointestinal tract, because stress has been demonstrated to produce gastric mucosal lesions in rats[18,19]. Our previous works showed that the food and water consumption in sleep disturbed rats were not affected but they had a smaller percentage gain in body weight. The locomotion activities of sleep disturbed rats were similar to the controls, however, their adrenal weights were increased[20]. The mucosal epithelial cell proliferation rate was also suppressed by sleep disturbance. Although various factors have been proposed to account for this process, the precise mechanism of how sleep deprivation affects the gastric mucosa barrier, especially at the molecular level, still remains unclear. Previously, we used cDNA expression arrays to identify genes that abnormal expressed in gastric mucosa of sleep deprivation rats[20]. In this project, inducible heat shock protein 70, one candidate gene emerging from cDNA array for its potential significance was further analyzed.

MATERIALS AND METHODS
Rats and reagents

Male Sprague Dawley rats weighing 180 g-200 g were used in the experiments. They were housed in a temperature 22 °C ± 1 °C and humidity 65%-70% controlled room with a day night cycle of 12 h. The rats were given standard laboratory diet (Ralston Purina Co., Chicago, IL) and tap water ad libitum. Rats were starved for 24 h and water withdrawn 1 hour prior to any oral or intragastric administration of agents in order to obtain a uniform distribution of those agents onto the gastric mucosa. All chemicals used in this study were purchased from Sigma Chemical Co. (St. Louis, USA) unless specified otherwise. The present study has been examined and approved by the Committee on the Use of Live Rats for Teaching and Research of the University of Hong Kong.

Rats for sleep disruption were placed inside a computerized rotating drum while the control animals were left undisturbed in a stationary drum. The drum was rotated 180o in 30 s at 5 minutes intervals and was programed to switch off for 1 h every day at 13:00 to allow for an hour of undisturbed sleep. Sleep disturbance was continued for 1 wk before the animals were killed.

Rats were killed by ether anesthesia followed by cutting off the abdominal aortic artery. The stomachs were removed rapidly, opened along the greater curvature, and rinsed with cooled normal saline thoroughly. A longitudinal section of gastric tissue was taken from the anterior part of the stomach and then fixed in 100 mL·L-1 buffered formalin for 24 h. It was cut into sections of 5 µm and then used in immunostaining. Gastric mucosa was taken from the remaining part of the stomach by scraping with a glass slide on a glass dish on ice. They were wrapped by a piece of aluminum foil, immediately froze in liquid nitrogen and stored at -70 °C until assayed.

Fixed tissue sections (5 µm) were mounted on Vectabond Reagent-coated slides, deparaffinized and rehydrated through xyline, graded ethanol to distilled water. After blocking endogenous peroxidase with 3 mL·L-1 hydrogen peroxide in methanol for 30 min, sections were treated with 0.05 mol·L-1 phosphate-buffered saline containing 30 mL·L-1 normal horse serum and 3 g·L-1 Triton X-100 for 30 min, then the sections were rinsed with PBS, incubated with mouse anti-rat monoclonal antibody (StressGen Biotechnologies Corp. Victoria, Canada, Cat# SPA-810) at dilution of 1:200 overnight at 4 °C in a humidity chamber. The secondary, biotinylated antibody (LSAB kit, Dako, Denmark) was then applied for 30 min followed by rinsing with PBS. Staining was performed by the addition of streptavidin (LSAB kit, Dako, Denmark) for 30 min, rinsed in PBS and developed in 3, 3’-diaminobendine tetrahydrochloride for about 3 min. Sections were counterstained with Mayer’s hematoxylin, dehydrated, cleared and mounted.

Rats were starved for 24 h before 1mL of 500 mL·L-1 ethanol was administered orally to induce acute gastric mucosal damage[33]. Rats were killed 2 h later by a sharp blow on the heads followed by cervical dislocation. The stomach was removed and opened along the greater curvature. The gastric lesion area (mm2) was traced onto a glass plate and subsequently measured on a graph paper with 1 mm2 division[34]. The lesion index was calculated by dividing the total lesion area with the number of rats in each group.

The data were statistically analyzed with the unpaired two-tailed Student’s t test. 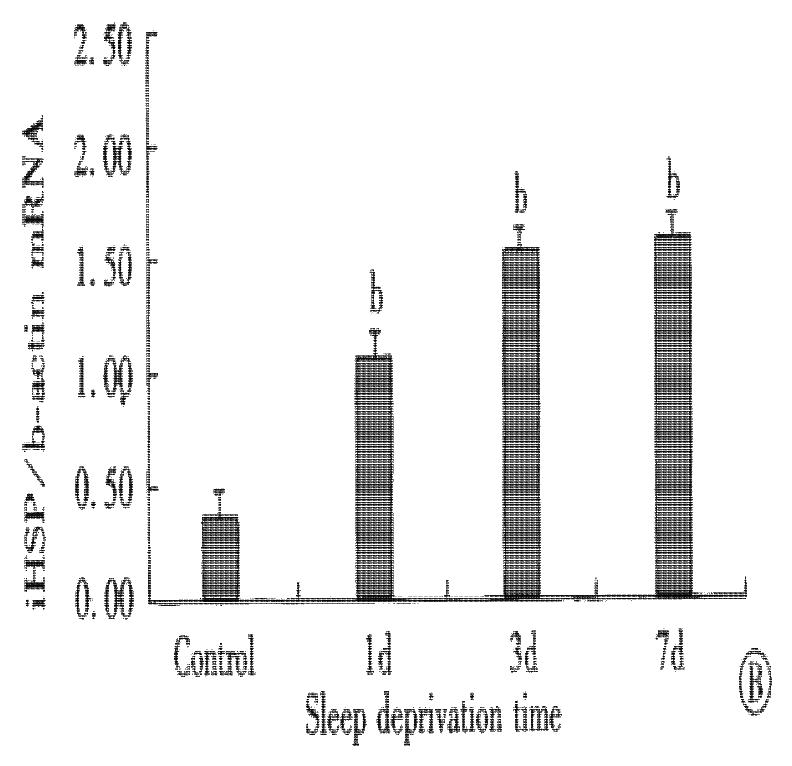 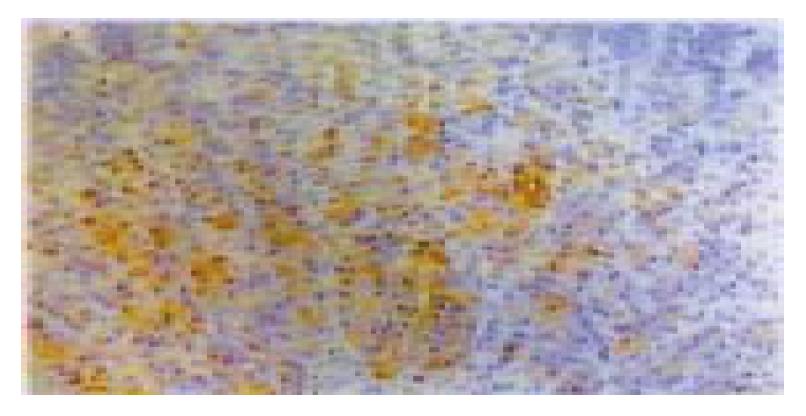 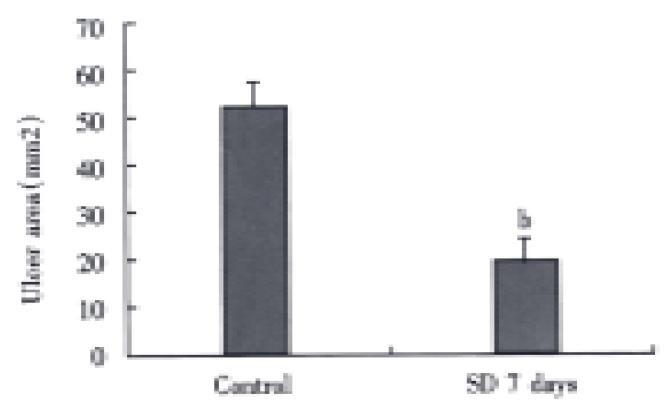 We would like to thank Mr. Leung for his technical assistance in constructing the rotating drum.