Helicobacter pylori (H. pylori) is associated with the development of chronic gastritis, peptic ulcer and gastric cancer and gastric MALT lymphoma[1-9]. H. pylori has many antigens, including urease, heat shock protein and vacuolating cytotoxin and so on, and urease is an important factor in the colonization of the gastric mucosa and suspected to cause damage to the gastric mucosa[10-14]. At the same time, urease is also one of the important protective antigens. It consists of two distict subunits with apparent molecular mass of 29.5 ku (UreA) and 66 ku (UreB), and urease B subunit is nontoxic, highly immunogenic, and an effective component of protective antigens[15-18]. In our study, Hp ureB gene was cloned in the fusion expression vector and expressed in Escherichia coli. We described the immunological characteristics of purified recombination UreB protein.

Construction of the expression vector

A 5' primer (CGTCAAGCTTATGAAAAAGATTAGCAG) and a 3' primer (CGTCGATATCATCCTAGAAAATGCTAA) were used in a PCR with Taq polymerase to amplify the 1.7-kb fragment containing the sequences of ureB flanked by Hind III and EcoR V restriction enzyme digestion sites. The amplification cycles were an initial denaturation step of 94 °C for 5 min, followed by 35 cycles of annealing at 55 °C for 2 min, extension at 72 °C for 2 min, and denaturation at 94 °C for 1 min, then extension at 72 °C for 2 min. PCR products were run on 10 g·L-1 agarose gels (containing 0.5 mg·L-1 ethidium bromide). The amplified product purified with DNA purification kits was digested with Hind III and EcoR V, and ligated into the corresponding sites of PinPointTM Xa-3. The recombination plasmid named pPin-UreB was introduced into E. coli JM109 by CaCl2 perforation.

Expression of the ureB gene

E. coli JM109 containing the expression plasmid pPin-UreB was grown in Luria-Bertani broth containing ampicillin(100 mg·L-1) and biotin (2 μmol·L-1 final concentration). The culture was incubated at 37 °C and shaked at 200 r·min-1, until the A600 was 0.8. Prior to adding 1 mmol·L-1 IPTG to cultures, a 1 mL sample was taken (noninduced cell). Cultures were incubated for a further 5 h, at which time another 1 mL sample (induced cell) was taken. The noninduced and induced cell samples were later analyzed by sodium dodecyl sulfate-polyacrylamide gel electrophoresis (SDS-PAGE). Following electrophoresis, the proteins were transferred onto a nitrocellulose membrane by electroblotting. The membrane was incubated in TBST buffer for 60 min firstly, then in 15 mL TBST buffer containing 3 μL streeptavidin-alkaline phosphatase for 30 min at room temperature with gentle agitation. After washed with TBST for 5 min, the membrane was incubated with Promega's Western Blue R stabilized substrate for alkaline phosphatase at room temperature until the bands appear. Dark purple bands will indicate the location of the biotinylated protein species in the lanes containing cellular extracts.

Purification of the recombinant fusion protein

IPTG-induced cultures were spun at 8000 r·min-1 for 10 min at 4 °C. Pellets were resuspended in cell lysis buffer (50 mmol·L-1 Tris-HCl pH7.5, 50 mmol·L-1 NaCl, 50 g·L-1 glycerol) and sonicated on ice. Cellular debris were removed by centrifugation (10000 r·min-1, 4 °C, 15 min). The supernatant was added into the column containing SoftLinkTM-Resin, and the cell extract was captured efficiently. To elute the protein, adding a stabilizing buffer containing 50 mmol·L-1 biotin, when a volume of elution buffer equal to one-half the volume of resin in the column had been applied, stop the flow from the column. Wait 15 min to allow for release of the fusion protein. The fractions containing higher concentration fusion protein were collected in the eluate. The purified fusion protein was cleaved by factor Xa protease at 37 °C. The reaction products were added into SoftLinkTM-Resin Column again. In the process of elution, the purified UreB protein was collected.

Two groups of 10 Balb/C female mice (six week old) including controls were used as follows: ① NS control group was non-immunized mice that received NS; ② UreB group was the mice immunized with 200 μL NS containing purification rUreB protein (50 g·L-1) each time and once a week for 4 weeks under the skin of the back, and added in Freunds incomplete adjuvant for the first time. Thirty-five days after the immunization, blood was collected from the retro-orbital sinus and the antibody titer was measured with enzyme-linked immunosorbent assay (ELISA). The purified recombination UreB protein was used to coat 96-well microtiter plates (Corning-Coster Company, USA) and sheep anti-mouse IgG antibody conjugated with horseradish peroxidase (HRP) was used in the assay.

Microtiter ELISA plates were coated by incubating the plates with 5 mg·L-1 recombination UreB 0.1 mL diluted in phosphate-buffered saline (PBS) at 37 °C for 4 h. After washing plates twice with PBS, the remaining binding sites were blocked by incubating the plates with 10 g·L-1 bovine serum albumin (BSA) at 37 °C for 30 min (200 mL·well-1). The human antisera against Hp and control sera from healthy people were added to the coated well and incubated for 2 h at 37 °C. After another washing procedure, HRP-conjugated sheep anti-human IgG antibody 100 μL diluted in PBS (working dilution, 1:5000) was added to each well and incubated for 1 h at 37 °C and σ-phenylenediamine in PBS was used as the substrate. The enzyme-substrate reaction was read with Spectra Classic spectrophotometer (Tecan, Austria) at 492 nm.

RESULTS
Construction of the expression vector

The PCR product amplified from plasmid pHp-UreB was analyzed under ultraviolet light after 10 g·L-1 agarose gel electrophoresis (Figure 1). The 1.7 kb PCR product was digested with Hind III and EcoR V restriction enzyme and ligated into the corresponding sites of PinPointTM Xa-3. The recombinant expression plasmid was named pPin-UreB. pPin-UreB was identified by digesting with Hind III and EcoR V, and the 1.7 kb ureB fragment was separated by electrophoresis in 10 g·L-1 agarose gel (Figure 2). Analysis of DNA sequencing, showed that the nucleotide sequence of ureB gene in plasmid pPin-UreB was the same as reported in the reference[19]. 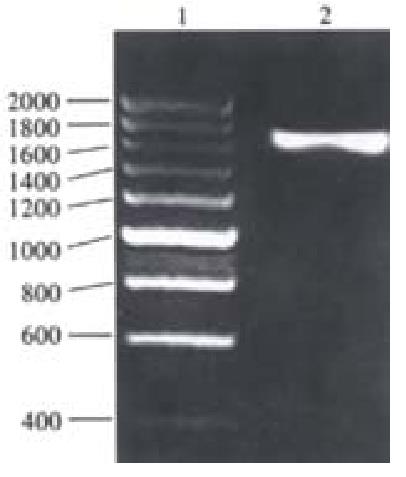 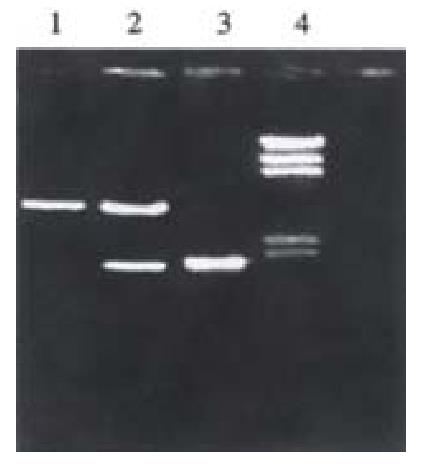 The plasmid pPin-UreB was induced to express H. pylori UreB protein by IPTG in E. coli JM109, and produced the fusion protein with predicted molecular masses of 79 ku (Figure 3). The fusion protein on 100 g·L-1 polyacrylamide gel was transferred by electroblotting onto an NC membrane and was detected with Streeptavidin-Alkaline Phosphatase Detection System. The result showed that there was a positive band on the site of the fusion protein in pPin-UreB strain but not in control strains (Figure 4). Measured by UVP Protein Analyser, the biotinylated fusion protein was 150 g·kg-1 in the total bacterium protein.

The recombinant fusion protein expressed in E. coli was separated and purified by affinity chromatography with the SoftLinkTM-Soft Release Avidin Resin. The biotinylated fusion protein was cleaved into two parts with Factor Xa proteinase: UreB protein (66 ku) and biotin tag protein (13 ku). With purification of column chromatography, the recombinant UreB protein was obtained and analyzed by SDS-PAGE and Western blotting. The purified UreB protein had predicted molecular masses of approximately 66 ku and its purity was more than 95% (Figure 5). 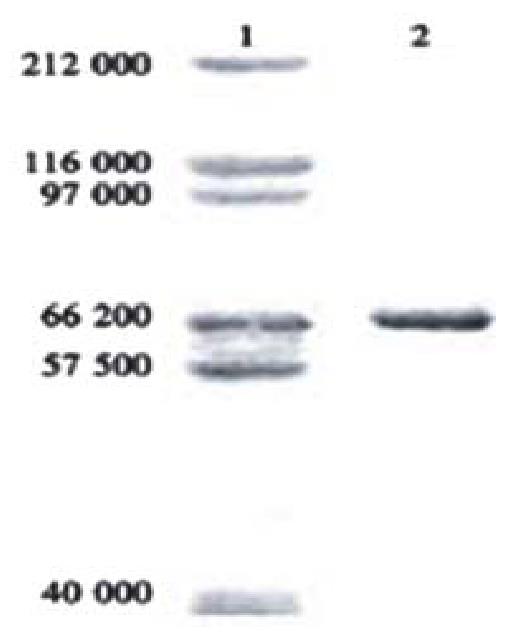 Balb/C mice, immunized with recombinant UreB, generated anti-UreB antibody and the titer was detected to be 1:3000 with ELISA. However, in the mice of the control group no antibody was found. Fourty antisera against H. pylori and 20 control sera from healthy people were detected by ELISA with recombinant UreB protein, the coincidence ratio being 100%.

H. pylori urease is a nickel metalloenzyme, which hydrolyzes urea and is 50-100 g·kg-1 in total protein of the cell. H. pylori urease is a 550 ku enzyme, consisting of two distinct subunits: UreA (29.5 ku) and UreB (66 ku). The ratio of subunits is approximately 1:1, suggesting a stoichiometry of (29.5-66 ku) 6 for the native enzyme. The research of H. pylori urease genes suggest that ureA and ureB are structural genes, which are required for the synthesis and assembly of the 550 ku apoenzyme[13], and these additional genes (ureC, ureD, ureE, ureF, ureG and ureH) are required for the expression of urease activity[13,20,21]. To express recombinant UreB protein (rUreB), we cloned H. pylori ureB gene by PCR and constructed the expression plasmid pPin-UreB containing H. pylori ureB gene. The purified rUreB was absent of urease activity in our study, which is different from what Li et al[22] reported. At the same time, the cloned ureB gene was sequenced and the sequence homology of nucleotide and predicted amino acid were 96.44% and 99.65% with those reported by Labigne et al[23]. The difference of nucleotide was due to the difference strains and gene diversity, but the obvious DNA homology suggested that the main antigenic determinants which encode H. pylori UreB protein were similar in difference strains[13,24,25].

Urease is the important antigen of H. pylori, which can stimulate significant immune response. These results suggested that the significant immunoprotection against H. pylori infection was induced after the purified native urease from H. pylori and recombinant urease were used to immune mice, and that the recombinant UreB but not rUreA protein produced immunoprotective response against H. pylori infection in mice after immunization separately[26-30]. In our study, the purified rUreB protein was used to immune Balb/C mice under the skin, and the antibody against rUreB was produced successfully. These demonstrated that the rUreB protein had obvious immunogenicity, and could be used in H. pylori vaccine research[31-33].

Individuals infected with H. pylori produce vast quantities of specific immunoglobulin G (IgG) antibodies in the serum[34-36]. Serum antibodies against H. pylori can be detected by a variety of methods including complement fixation, bacterial agglutination and immunofluorescence but enzyme-linked immunosorbent assay (ELISA) is usually used due to speed, simplicity and reproducibility[37-41]. H. pylori urease is a key protein used for detection of the organism by measuring serum antibody against the protein[13]. We discovered that the purified rUreB protein had a positive reaction with specific antibodies against H. pylori in sera of patients and negative reaction with the control sera from healthy people. The specificity and sensitivity of rUreB to H. pylori antisera of patients will be used in the diagnosis, assessment of curative effect and epidemiological investigation of H. pylori.

Dr. Chao Wu, graduated from Third Military Medical University as a postgraduate in 2000, now a lecturer, specialized in diagnosis, prevention and therapy of infection, having 6 papers published.