RESULTS: HCV RNA positive strands were consistently detected the cultured cells for one year. The negative-strand RNA in LCL cells and the positive-strand RNA in supernatants were observed intermittently. Immunohistochemical results medicated expression of HCV NS3 and C proteins in LCL cytoplasm mostly. The positive signal of PCR product was dark blue and mainly localized to the LCL cytoplasm. The RT-PCR signal was eliminated by overnight RNase digestion but not DNase digestion.

CONCLUSION: HCV may exist and remain functional in a cultured cell line for a long period.

Hepatitis C virus has a positive-strand RNA genome of about 10 kb in length, which is grouped in the family Flaviviridae[1,2]. The viral particles are spherical with spike-like projections, and have morphological features similar to those of the Flavivirus[3]. The liver is the main target for replication of HCV in vivo[4,5], which occurs via minus-strand RNA as a replicative intermediate[7,8]. Recently, positive and negative strands have been detected in peripheral blood mononuclear cells (PBMC) isolated from HCV infected patients by both RT-PCR[6,7] and in situ hybridization[9]. PBMC are therefore suspected as a possible site of extra-hepatic replication of HCV. It has been recognized for almost 31 years that Epstein-Barr virus (EBV) is capable of transforming lymphocytes into immortal cell lines[10]. We detected HCV RNA of the cultured cells and growth media by reverse transcriptase-polymerase chain reaction (RT-PCR) each month. Antigens of HCV were further tested using the immunohistochemical and the streptavidin/peroxidase (SP) staining methods and in situ RT-PCR. Our results offer strong evidence for the persistence of HCV RNA in mononuclear blood cells.

PBMCs were obtained from a female patient. PBMCs were whose serum tested positive for both anti-HCV antibodies and HCV RNA isolated from heparinized peripheral blood by using a diatrizoate-Ficoll (Eurobic) density gradient and washed three times in PBS before being resuspended in RPMI-1640 medium containing 20% fetal calf serum (FCS) (Gibco BRL).

Viral stocks were prepared from the growth medium of a B95-8 cell line EBV-transformed marmoset lymphocyte cells. The viral stocks were centrifuged at 400 ×g to sediment cells, frozen and thawed three times, and then passed through a 0.45 μm Millipore filter. They were determined to be free of mycoplasma and bacteria by culture.

Before exposure to EBV, isolated PBMC populations were maintained for 13-24 h at 2 × 106 cells/mL in 96-well plates. This procedure removed many phagocytic cells. Medium was RPMI-1640 supplemented with 20% heat-inactivated (56 °C, 30 min) fetal calf serum, penicillin (50 U/mL), and streptomycin (50 μg/mL). The cells were cultured at 37 °C in an atmosphere of 5% CO2. Phytohemagglutinin A-M (PHA-M) (Difco) was dissolved in RPMI-1640, sterilized by passage through a 0.45 μm Millipore filter, and added to the lypmphocytes 24 h before addition of EBV. Twenty-four hours after EBV transformation, the cultures were treated with Cyclosporin A (0.5 g/mL and 1.0 g/mL).

Stock of B lymphocytes transformed by EBV and its growth medium. After about one month, B lymphocytes transformed by EBV and subcultured were observed to have achieved immortalization. The culture medium was exchanged semi-quantity every week. The exchanged LCL was centrifuged at 400 ×g for 5 min to sediment the cells. The cell pellets were placed in RPMI medium containing 20% FCS and 10% DMSO. The cells and supernatants were separately stored in liquid nitrogen. Before PCR, the fresh or stored sedimentary cells were washed ten times in DEPC-treated PBS. The last wash was collected and saved. The cells were diluted at 5 × 107 cells/mL.

Total RNA was extracted from 100 uL of culture supernatant or from 5 × 107 cells resuspended in 100 μL of DEPC-treated water by a single-step method as described by Chomczinsky[13].

Immunocytochemistry was performed according to streptavidin/peroxidase (SP) staining method[18-21] using antibodies against HCV Core and NS5. The anti-HCV Core monoclonal antibody was kindly supplied by L Haoying (Academy of Military Medical Sciences, Beijing, China). The antibody was produced by immunizing a mouse with synthetic peptide based on the sequence of the HCV genome. Monoclonal antibodies to HCV NS3 proteins were produced against a recombinant HCV NS5 protein and were kindly supplied by Zhan Meiyun (Institute of Virology, Chinese Academy of Preventive Medicine) and Gao Jianen (Institute of Hepatology, People's Hospital, Beijing Medical University). Histostain TM-SP kit was a ZYMED product (U.S.A.).

We observed two distinct morphologies as early as 24 h post-infection with EBV, indicating successful transformation of the virus into the B cells: ① blastogenesis became evident resulting in enlargement of the lymphocytes or ② there was increasing development of cell aggregates of proliferative lymphoblast cells (Figure 1). After one month, the EBV transformed lymphocytes exhibited huge, spherical cell bodies, a few projections on the body surface, and large, varying nuclei (Figure 2). 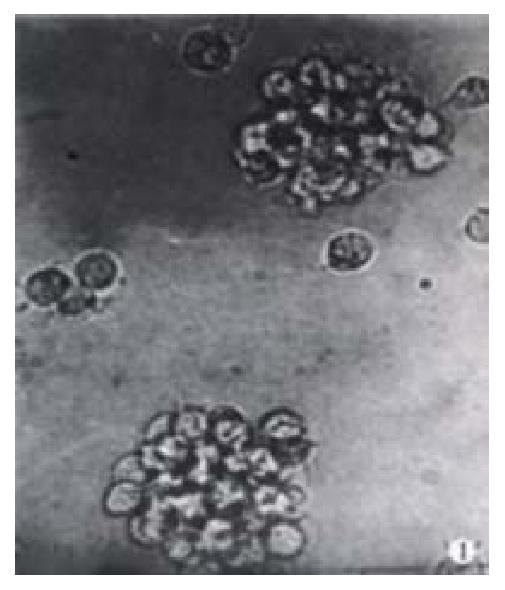 Figure 1 There was increasing development of cell aggregates of proliferative lymphoblast cells. 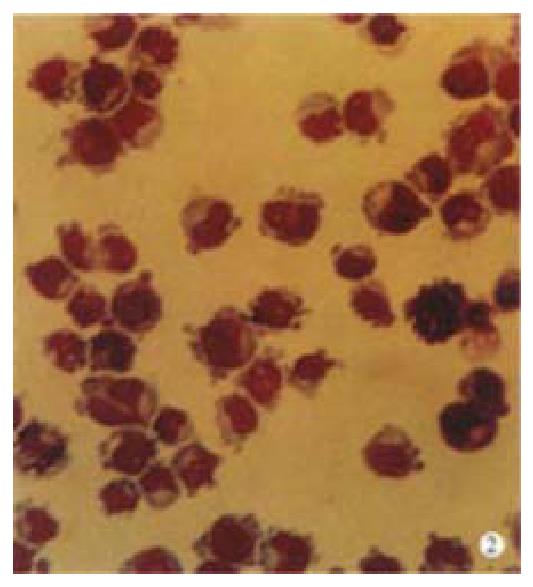 Figure 2 The immortal cell line of human peripheral blood mononuclear cells transformed by Epstein-Barr virus. The cell bodies are larger and sphereical. There are the false foot-like hairs or thorns on their surface. The cell nuclei are large and varied. The cells multiply and grow as cell regiments or clusters.
HCV of LCL and medium detected by nested RT-PCR 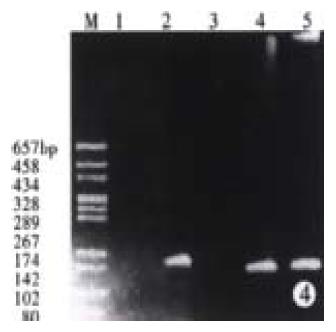 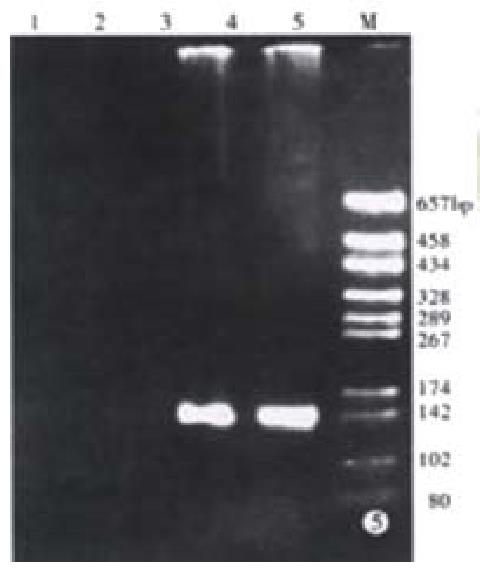 Expression of the virus-encoded proteins in the cells was tested by immunocytochemistry using a monoclonal antibody to synthetic HCV core peptide and recombinant HCV NS3. The immunocytochemical staining for both antigens was detected in the cytoplasm. The staining granular was seen as a brown lump in a side cytoplasm (Figure 6, Figure 7, Figure 8). 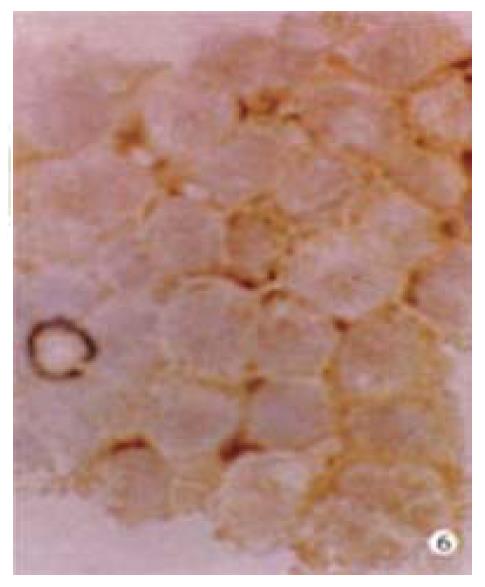 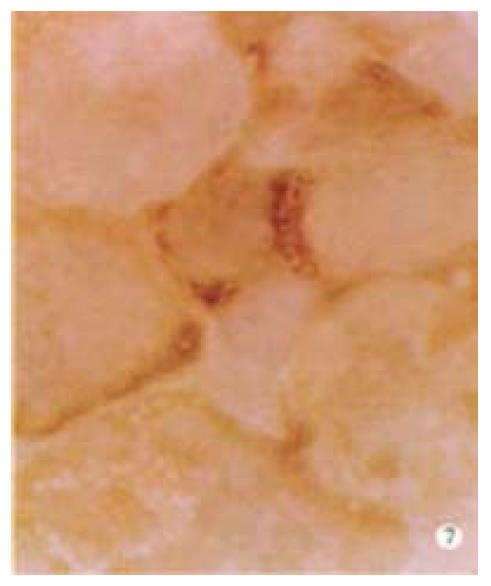 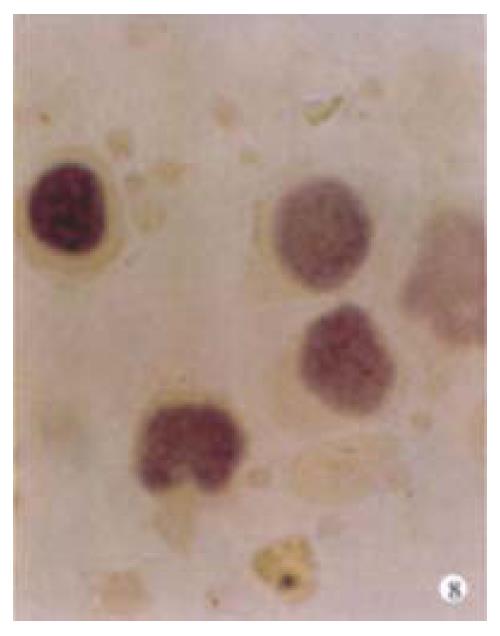 The positive signal of PCR product was dark blue and mainly localized to LCL cytoplasm (Figure 9). The specificity of the in situ cDNA product was checked in LCL cells. The RT-PCR signal was eliminated by overnight RNase digestion but not DNase digestion (Figure 10). 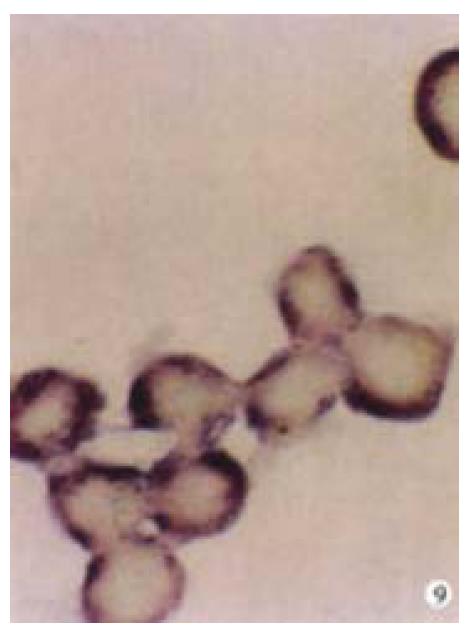 Figure 9 The blue-black positive signals of HCV RNA are exhibited in the LCL cell plasma but not in the nucleolus. × 400

Figure 10 The blue-black signals are not exhibited in negative control cells in situ RT-PCR. × 400
DISCUSSION

Our results indicate that PBMCs from hepatitis C patients may be easily transformed into immortal lymphocytes and subcultured over a long period of time. We did not observe any signs of humoral or cellular immunity against LCL cells in the culture media. The presence of HCV in cells was not achieved by incubation with HCV-positive sera. HCV plus-strand or minus-strand RNA was detected in the cells, and the plus-strand HCV was detected in the growth media. Our results offer strong evidence for in vivo HCV infection of PBMC, and indicate that HCV may persist in the cells transformed by EBV and cultured in vitro. The detection of viral particles and HCV gene expressing proteins in the cells by immunohistochemistry[18-21] and in situ PCR[23-29] confirmed further that such cells may support complete HCV multiplication. Investigation of the hepatitis C virus life cycle and the evaluation of novel anti-viral strategies are limited by the lack of an efficient cell culture systems. Although chimpanzees can be successfully infected with HCV sera from human patients, they do not serve as a good animal model due to their limited numbers and high cost. Many researchers have reported using the HCV positive sera incubated with Molf-4[31], HPB-MA[31] and H9 cells[32] (the human T cell lines), fetal hepatocytes[33], bone marrow-derived B cell line[34], PBMC from a healthy donor[35], and daudi cells (a human B cell line)[22] as a cell model of in vitro HCV replication. These experiments have provided abundant material fowards the establishment of new satisfactory models. PBMCs have been suspected as a possible site of extra-hepatic replication of HCV and a bank of latent infection of HCV. It relates closely to relapse of chronic hepatitis C[36-41].

Just for this reason, PBMCs from hepatitis C patients were transformed by EBV into immortal cell in vitro and subcultured. We hope to establish a new cell model which is more representable of the true state of in vivo HCV infection.

The development of human cytogenetics demonstrates scientific progress on new methodological approaches. Thus, the real beginning of clinical cytogenetics was marked by introduction of the lymphocyte culture technique as an easily accessible source of mitotic cell. However, due to the limited life-span of cells, new blood sampling is necessary in cases of re-examination. This might be difficult or even impossible if patients are not available for different reasons. Our procedure is available for routine use and allows efficient transformation of peripheral B lymphocytes by EBV and thus the establishment of lymphoblastoid cell lines[42]. Compared to other methods of long-term cultivation, these cell lines have a number of advantages: ① the original material can easily be obtained from any hepatitis C patient. ② LCL is the ideal source for HCV molecular biology studies in humans as repeated HCV RNA preparations can be obtained without effort.

The paper was supported by a grant from the Ministry Youth Research Funds of China, No. 98-1-269