Although reliable assays for the detection of hepatitis C virus and E virus became available, still 10%-20% hepatitis are not caused by hepatitisA-E virus[1-3]. In 1996, two research groups isolated this agent independently and almost simultaneously and named hepatitis G virus and GB virus C, respectively[4-7]. The nucleotide and amino acid homologies between GBV-C and hepatitis G virus (HGV) were 85% and 95%[5-7]. Therefore, GBV-C and HGV were considered as two different isolates of the same virus, referred to as HGV in this paper. HGV is a single-strand, positive sense RNA virus with approximately 9.4 kb in length, and classified as a member of Flaviviridae. HGV is mainly transmitted through transfusion and could be responsible for chronic liver infection. HGV RNA has been detected in the serum of intravenous drug users (IVDUs), volunteer and commercial blood donors, and patients with cryptogenic hepatitis[8-10]. Until now, RT-PCR is the most commonly used method for the diagnosis of HGV infection. It is necessary to develop a more convenient antibody detection assay. The baculovirus expression system is of a strong polyhedrin promoter[11], and can carry out many types of postranslation modification for a variety of proteins. Most of the expressed proteins were usually shown to be antigenic, immunological, and functionally similar to their authentic counterparts[12-16]. In this study, we used the baculovirus expression system to express HGV NS5 protein in Sf9 cells, and studied its immunogenecity.

pHTNS5 and transposing vector pFastBac HTa were digested with Bam H I and Kpn I, and were ligated by T4 DNA ligase. The ligation mixture was transformed into DH5α competent cell, the positive colonies were chosen on selecting agar plate (ampicillin 100 μg/mL) and identified with endonuclease digestion to obtain the recombinant plasmid pFHTNS5.

Recombinant bacmid was extracted according to the procedure of Bac-to-Bac system. For transfection, Sf9 insect cells were grown to 60%-70% confluence. The recombinant bacmid DNA 2 μg was transfected into insect cells Sf9 with Lipofectin. After 5 d-6 d incubation at 27 °C until the morphology of the cells had obvious changes, Sf9 cells and viral supernatant were harvested respectively.

Twenty μL viral supernatant harvested from the transfected cells was used to infect fresh insect cells. After 5 d-6 d incubation at 27 °C, the cells were harvested for protein expression analysis. The cells were washed twice with PBS and analyzed by SDS-PAGE according to the standard procedure. Western-blot was performed using HGV RNA positive sera (1:40 dilution).

PCR product was analyzed by agrose gel electrophoresis and the length was the same as expected (Figure 1). Sequence analysis showed that the HGV NS5 fragment was cloned into the vector with correct orientation (data not shown). 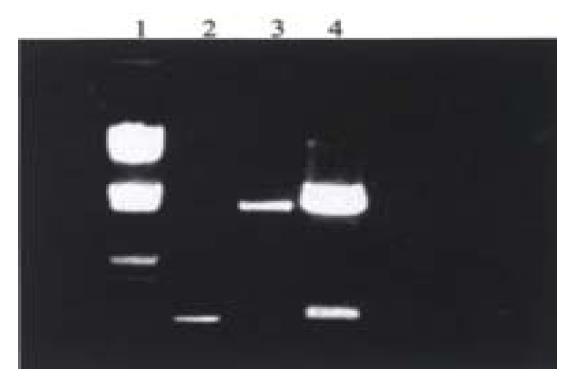 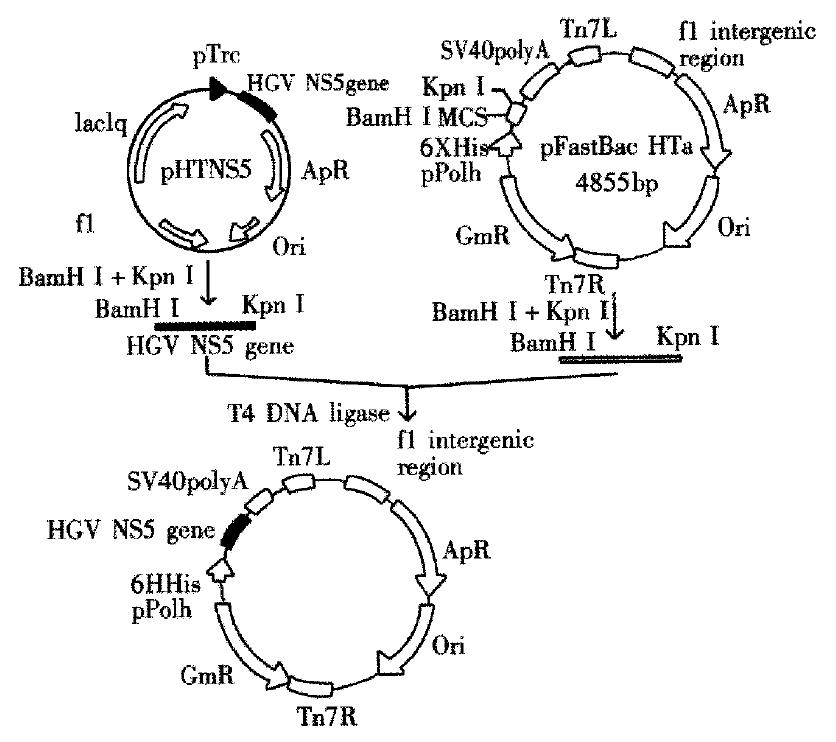 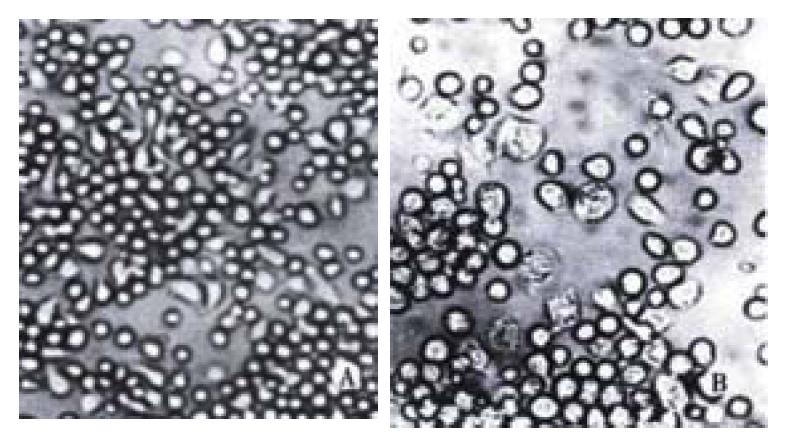 Transfected or infected Sf9 cells were harvested and analyzed on 12.5% polyacrylamide gels. Figure 4 shows the result of expressed target HGV NS5 protein with a molecular weight of Mr 41500. Scanning results indicated that the recombinant protein amounted to 11.7% of the total proteins. Western blot results implied that the recombinant protein could react with HGV RNA positive sera (Figure 5). 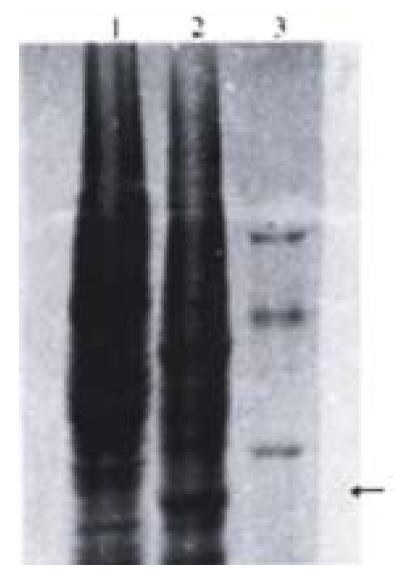 Although easy and reliable assays for the clinical diagnosis of HBV and HCV infection have been established[18-26], there still existed 10%-20% parenterally and community acquired hepatitis cases of unknown cause[4,5,7]. Transmission and molecular biology of these viruses have been studied thoroughly[27-34]. Clinical studies suggest that some of these may be of viral origin. HGV is a potential aetiological agent for viral hepatitis. As a member of Flaviviridae, HGV is a single-stranded RNA virus with a genome of 9400 bp in length which includes 5’ non-coding region, structural gene region C, E1, E2, non-structural gene region NS2, NS3, NS4, NS5a, NS5b and 3’ non-coding region. The genome contains a single open reading frame (ORF) which encodes a 2900 amino acid polyprotein precursor. Many researches have been carried out since the discovery of HGV, the studies of its antigencity is one of them[17,35-39].HGV NS5B protein functions as RNA-dependent RNA polymerase]. In addition, Pilot-Matias et al[40] also found that C26, C27, C28 (2047-2376 aa) of HGV NS5 gene had potential antigen epitopes. Wang et al[41] reported that two linear epitopes (P22, P6) might exist in HGV NS5 gene. The obtained HGV NS5 recombinant protein will provide important materials for studying its structure and function.

The Bac-to-Bac system was established by Luckow[11] in 1993, and a variety of proteins have been expressed with the control of a strong polyhedin promoter since then. It is based on site-specific transposition (transposon Tn7) of an expression cassette into baculovirus shuttle vector (bacmid) propagated in Escherichia coli. After selection of blue-white clonies, recombinant bacmid DNA was extracted for the transfection of Sf9 cells. Insect cells can identify and run many modifications of post-translation and make the expressed protein close to natural protein.

In this study, HGV NS5 gene fragment amplified by PCR was confirmed by restriction enzyme and sequence analysis, and cloned into baculovirus transposing vector pFastBacHTa. Recombinant bacmid was obtained with site-specific transposition, Sf9 cell was transfected with recombinant bacmid or infected with viral supernatant. On the polyacrylamine gel, an expected protein band was seen at Mr 41500. Western blot found that HGV NS5 recombinant protein could react strongly with HGV RNA positive sera, which implied that recombinant HGV NS5 protein could be used as antigen to detect HGV infection.