Vitamin E succinate (RRR-α-Tocopheryl Succinate, VES), a derivative of natural vitamin E, is a compound esterified by succinic acid and 6-hydroxyl-α-tocopheryl. VES can increase the stability of á-tocopheryl and protect 6-hydroxyl from oxidation. Nowadays, this kind of vitamin E has been on sale on the markets. Previous researches indicate that VES has an evident inhibitory effect on the growth of various tumor cells, but has no harm to the growth of normal cells[1-7]. The experiment in vivo has demonstrated that VES can cause the tumor to retrogress by regional injection[8,9]. Thus it is presumed that VES may be a potential tumor chemopreventive and chemotherapeutic agent.

Gastric cancer is one of the most common tumors in China. Up to now, most studies have focused on the preventive measures for tumors[10-13], but there has been few reports that VES inhibits the growth of gastric cancer. Our study showed that VES has an obviously inhibitory effect in the growth and DNA synthesis of human gastric cancer SGC-7901 cells[14]. The observation under electron microscope and the detection by flow cytometry and in situ end-labeling methods implicated that VES can induce gastric cancer cells to undergo apoptosis[15]. The exact mechanism of VES-induced growth inhibition in tumor- cells has still been unclear, but it has been reported that transfor ming growth factor beta (TGF-β) played a critical role in VES-induced apoptosis in tumor cells[16,17]. In addition, VES-triggered apoptosis was inhibited when c-Jun mutant was transfected into breast cancer cells[18]. The data above show that both TGF-β and c-Jun may be important factors for VES-induced apoptosis. In this study, the expression of TGF-β1, c-Jun and c-Jun NH2-ter minal kinase (JNK) was deter mined in SGC-7901 cells treated with VES so as to explore the mechanisms of VES-triggered apoptosis in gastric cancer cells.

VES was prepared at 5, 10 and 20 mg/L by 100% ethanol. The concentration of ethanol in VES solution was adjusted to 0.1% (v/v) by 100% ethanol. Exponentially growing SGC-7901 cells were treated with VES. RPMI1640 complete condition media containing 1 μL/mL ethanol served as control.

ELISA When the cells were cultured for 12 h,18 h, 24 h and 48 h respectively, condition media was aspirated and centrifuged. The supernatant was prepared for the detection of activated TGF-β1. Next, 500 μL culture supernatant was added into 0.1 mL 1N HCl and centrifuged for 10 min at room temperature. Then 0.1 mL 1.2N NaOH was used to neutralize the acidified samples for the detection of total TGF-β1. Standard solution was prepared at different concentrations according to the instructions in the kit. Standard solution (200 μL per well) or activated samples were added into the 96-well plates bound with human recombinant TGF-βs R II. Then the steps proceeded as instructed. Finally, the value of optical density (OD) of each well was deter mined at 450 nm within 30 min, using a microplate reader set to 450 nm, and corrected at 540 nm.

Western blot SGC-7901 cells were harvested, decomposed on ice and centrifuged. Total protein contents in the supernatant were detected by nucleic acid and protein analyzer. Total protein (100 μg) was used for 12% SDS-PAGE electrophoresis and transferred onto nitrocellulose membrane, which was hybridized with rabbit c-Jun/AP-1 or JNK1 polyclonal antibodies (1:1000 dilution) and then with the secondary horseradish peroxidase-labeled antibody to detect the expression of c-Jun and JNK1.

RESULTS
Effects of VES on the expression of TGF-β protein 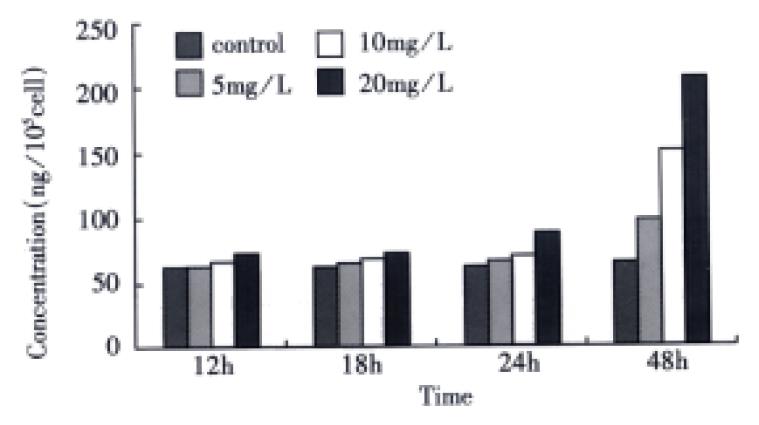 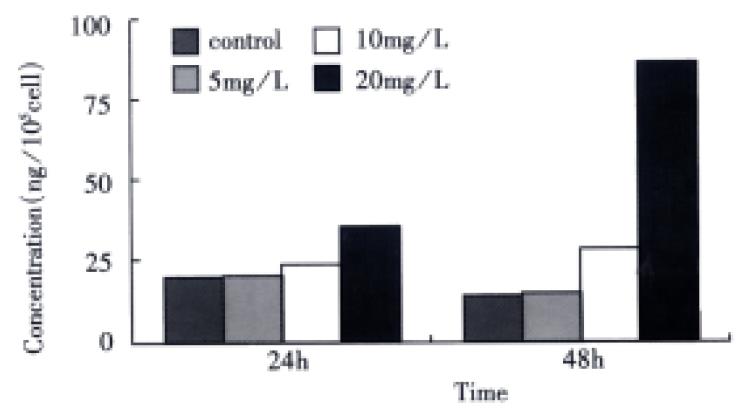 The transferred filter membrane was hybridized with rabbit c-Jun/AP-1 polyclonal antibodies, then with the secondary antibody, colorated with DAB and imaged by digital imaging maker (Figure 3 and Figure 4). From Figure 3, it can be seen that VES-treated SGC-7901 cells at 10 mg/L for 3 h exhibited evidently increased level of c-Jun protein. It was in a high state within 24 h and began to decrease after 24 h. Figure 4 indicates that the expression of c-Jun in VES-treated SGC-7901 cells at different concentrations at the same time was increased with a significant dose-effect relationship. 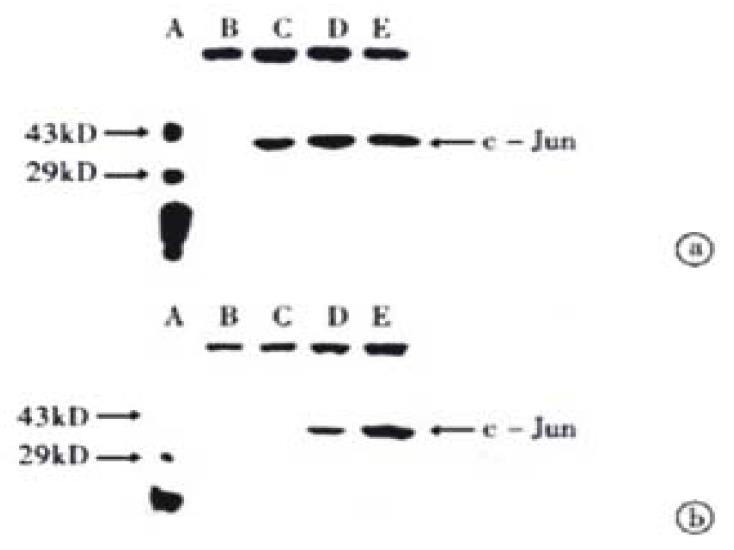 The procedure was similar to that for c-Jun (Figure 5 and Figure 6). Figure 5 shows that when SGC-7901 cells were treated with VES at 10 mg/L for 3 h, the expression of JNK1 was obviously promoted and further promotion occurred with the lapse of time within 24 h. Figure 6 implicates that the level of JNK1 expression was different in VES treated SGC-7901 cells at different concentrations at the same time. Compared with the control, the expression of JNK1 was evidently elevated in a dose-dependent manner. 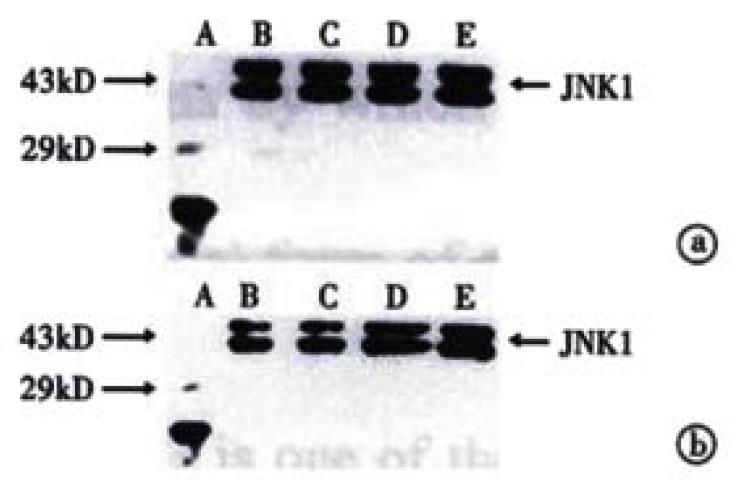 Previous researches showed that induction of apoptosis in tumor cells is one of the important mechanisms by which VES inhibits tumor cell growth[15,19]. Apoptosis is the most common physiological form of cell death and occurs-during embryonic development, tissue remodeling, immune regulation and tumor regression. Thus, initiation of apoptotic signal pathway and induction of apoptosis in tumor cells will be an effective approach for treating tumors[20-23]. Apoptosis is controlled by genes. Now hundreds of regulatory factors have been identified. These factors form many apoptotic signal transduction pathways which are complex[24-28]. In this study, several apoptosis-related proteins were deter mined to investigate the possible pathways involved in VES-induced apoptosis of human gastric cancer SGC-7901 cells.

Transfor ming growth factor (TGF) is a large family of multifunctional cytokines which can regulate cell proliferation, differentiation and death[29-31]. It has been proved that TGF-β, a latent inhibitor of epidermal proliferation, plays a role in the inhibition of more than three quarters of human primary tumors (such as breast cancer[32,33], prostatic carcinoma[34], lung cancer[35,36], colic carcinoma[37] and liver cancer[38,39]). Inhibition of the activation of latent TGF-β, down-regulation or loss of the expression of TGF-β receptors and deficiency of important elements responsible for cellular message transmitting pathway cause tumor cells to escape the growth inhibition of TGF-β, resulting in cancer[40-42]. Yu et al[43] found that VES can improve the secretion of activated TGF-β1 and induce apoptosis in human breast cancer MDA-MB-435 cells. When TGF-β antibody neutralization assay was applied or antisense TGF-β R II oligonucleotide was transfected into breast cancer cells, the ability of VES-induced apoptosis was blocked by 50%, which implicated that the increase of TGF-β expression was related to induction of tumor cell-undergoing apoptosis. In our study, activated TGF-β1 was directly measured with the kit in VES-treated SGC-7901 cells and its expression was distinctly increased; yet total TGF-β1 was detected when the samples were acidified and its expression was also clearly promoted. These facts suggested that VES can induce not only the activation of active TGF-β1 but also an increased secretion of latent TGF-β1. Latent TGF-β1 is released from cells into media and activated by some enzyme outside the cell membrane.

c-Jun is an early and transient gene[44] and its response to many kinds of stimuli is rapid and transient. The expression of c-Jun can be enhanced and prolonged by many stress stimuli such as ultraviolet, irradiation, hydrogen peroxide, tumor necrosis factor α and other apoptosis-triggering factors[45,46]. As mentioned above, VES-induced apoptosis rate was obviously decreased when human breast cancer cells were transfected with antisense c-Jun oligonucleotide or c-Jun mutant[18]. Our results showed that the expression of c-Jun was elevated and prolonged in VES-treated SGC-7901 cells (usually the expression of c-Jun only lasted 3 h-4 h or even shorter), indicating that c-Jun was also involved in apoptosis of VES-treated SGC-7901 cells.

It is reported that the mainly biological roles of c-Jun are the induction of cell cycle arrest and apoptosis[47-49]. JNK can directly bind with transcription factor c-Jun and activate c-Jun through phosphorylation of serine 63/73, suggesting that the activation of JNK is the upstream events involved in phosphorylation of c-Jun. It is also known that JNK belongs to mitogen-activated protein kinases (MAPK) family whose activation can be evidently affected by TGF-β, which shows that the activation of JNK can be possibly influenced by TGF-β[50-52]. These data suggest that JNK may be involved in VES-mediated apoptosis in tumor cells. In our study, the expression of JNK protein in VES-treated SGC-7901 cells was obviously increased with a dose-dependent relationship. Therefore, we suspect that JNK1 may be involved in apoptotic signal transduction similar to TGF-β1 and c-Jun. When SGC-7901 cells were treated with VES, the secretion and activation of TGF-β were improved, TGF-β increased the activity of JNK, JNK caused the phosphorylation of c-Jun, and finally activated c-Jun triggered apoptosis in tumor cells.

Although we presumed a signal pathway responsible for VES-induced apoptosis in SGC-7901 cells, several interrelated pathways may trigger apoptosis simultaneously owing to the fact that the mechanisms of apoptosis are complicated and precisely regulated. So the observation that the expression of these three proteins is increased is only the preli minary survey on VES. With the development of molecular biological technology, if the strategies that a point in designed signal pathway is “knockout” by different means and then the blockage of downstream events is observed can be carried out, it will be critical for further studies on the mechanisms of VES-mediated growth inhibition in tumor cells.

We would like to thank Dr. Wei Ping Yu, Genetics Institute, Texas University of USA, for the technical assistance.